My husband and I both signed up for Working Equitation for the fourth day. This was a fun session that started off a bit badly. We were walking around in the warm up area when I dropped my crop and got off to get it. One of the teenagers in the group, not paying attention to general horse safety rules, let her horse reach over and bite Levi in the butt. He reacted by biting my hand. I understand why he did it. I understand displacement. I don’t care. He got beat. Biting is not allowed.

At the time I thought maybe he’d broken my thumb. I couldn’t really move it without a lot of pain, I ended up wearing a thumb brace for a few weeks and it has gotten a lot better. It’s not 100% healed as it still bothers me a bit and I can’t do anything requiring force with it, but I don’t think it’s broken.

For WE that day, we were doing a full course like at a show. We ran through the course once each doing it like an Ease of Handling course – emphasizing form and dressage skills and not speed. It was all the same obstacles we did the previous days with an additional obstacle where we had to stop at two standards and move a cup from one standard to the other. 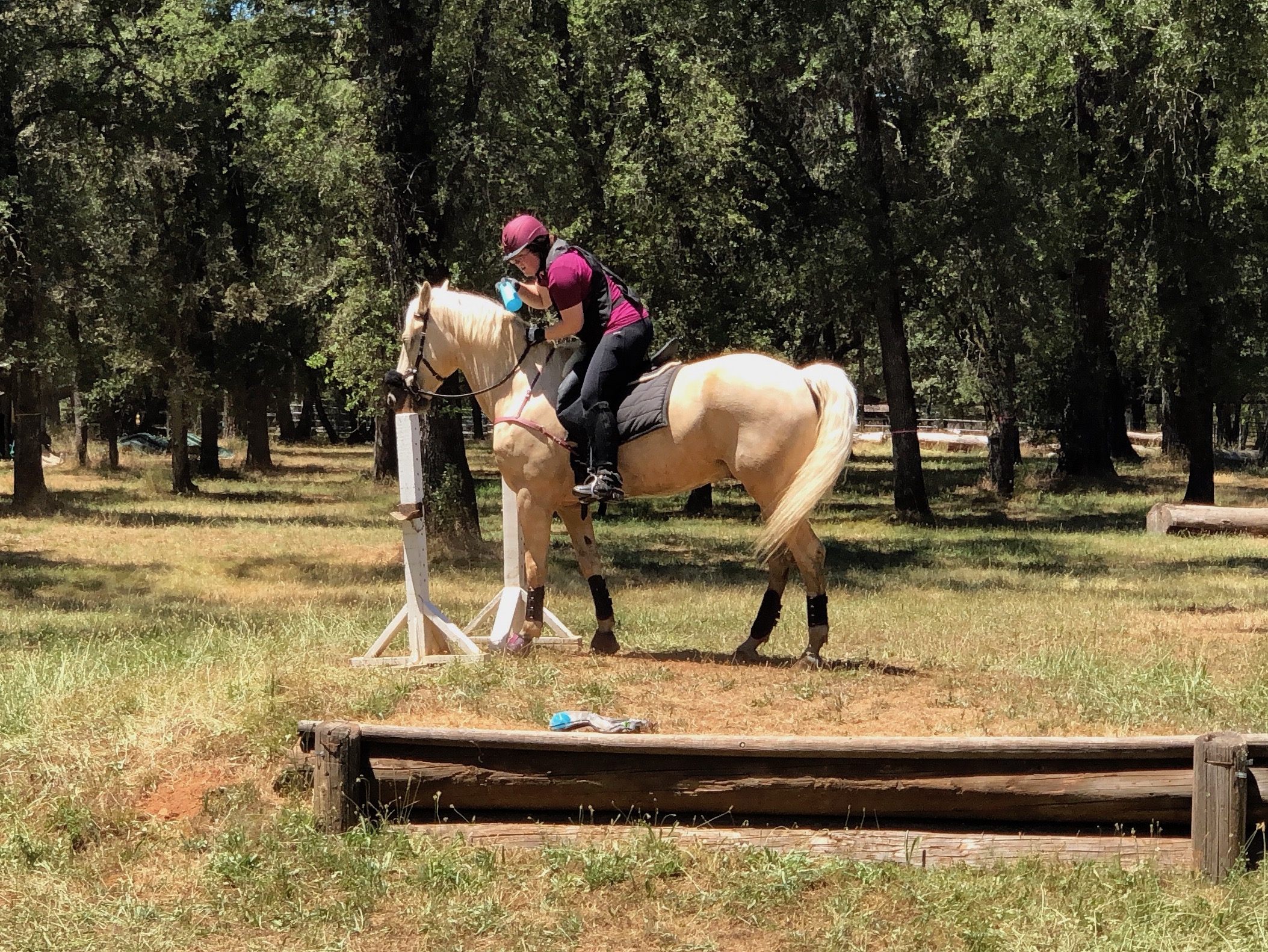 The course was long and had us going back and forth across the area a few times. It was boiling hot out though so downtime watching other people go wasn’t so bad. Levi was totally chill and stood hanging out while other horses did things. It’s really only when those horses are doing XC that he loses his mind.

Levi was also very good for his round. I did all of the activities with neck reining, which helped my thumb except when we needed to do the ring spearing and I had a hard time holding the pole. 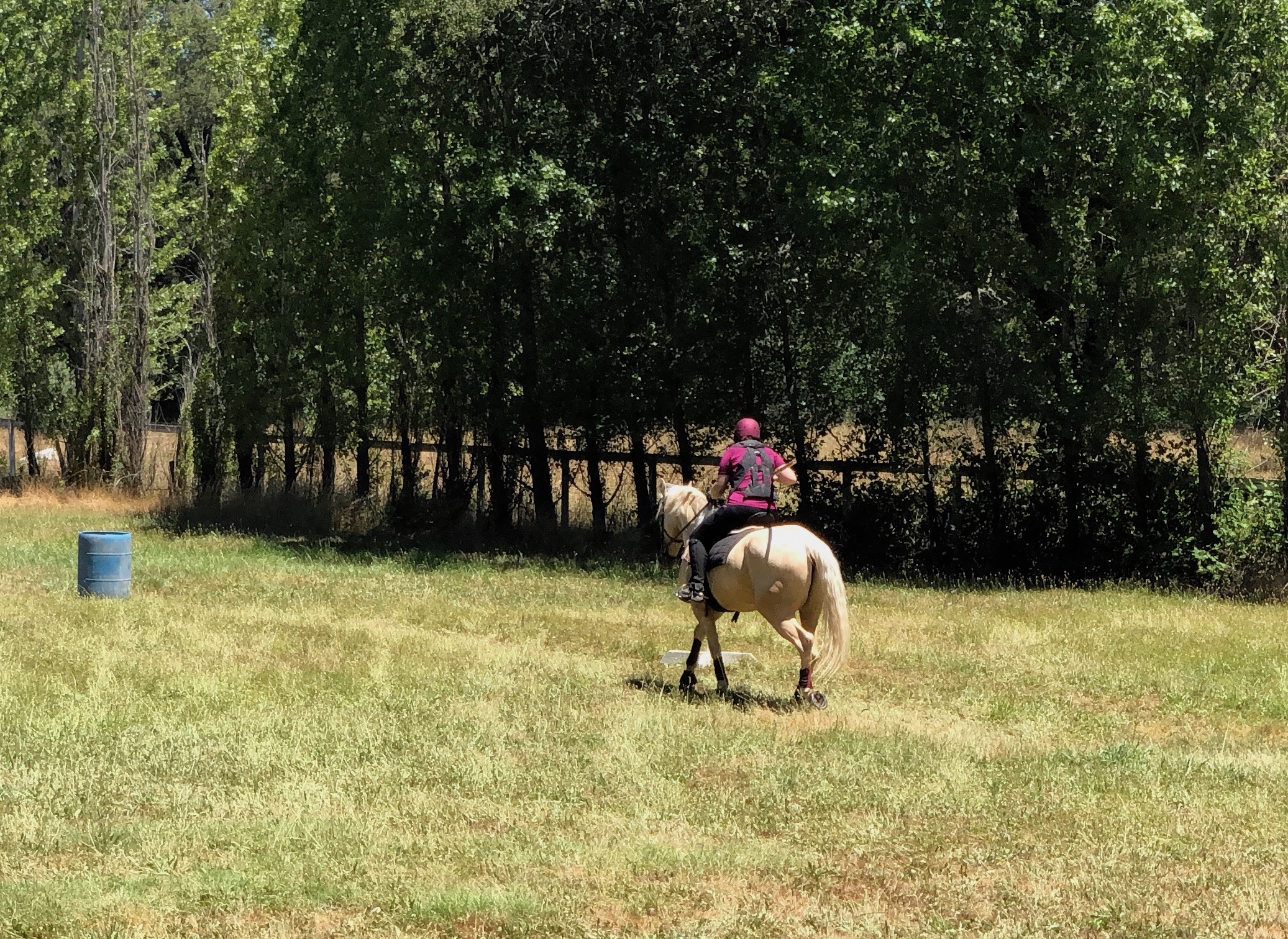 I also had a really hard time doing the sidepass poles via neck-reining. I’ve never done sidepass without direct reining. I know it should all come from my seat and legs, but I’m not that good at dressage and still rely on my reins for a lot of things. We did get through it though. I didn’t get a picture of us doing the sidepass poles, but here’s one of my husband doing them with Eugene. 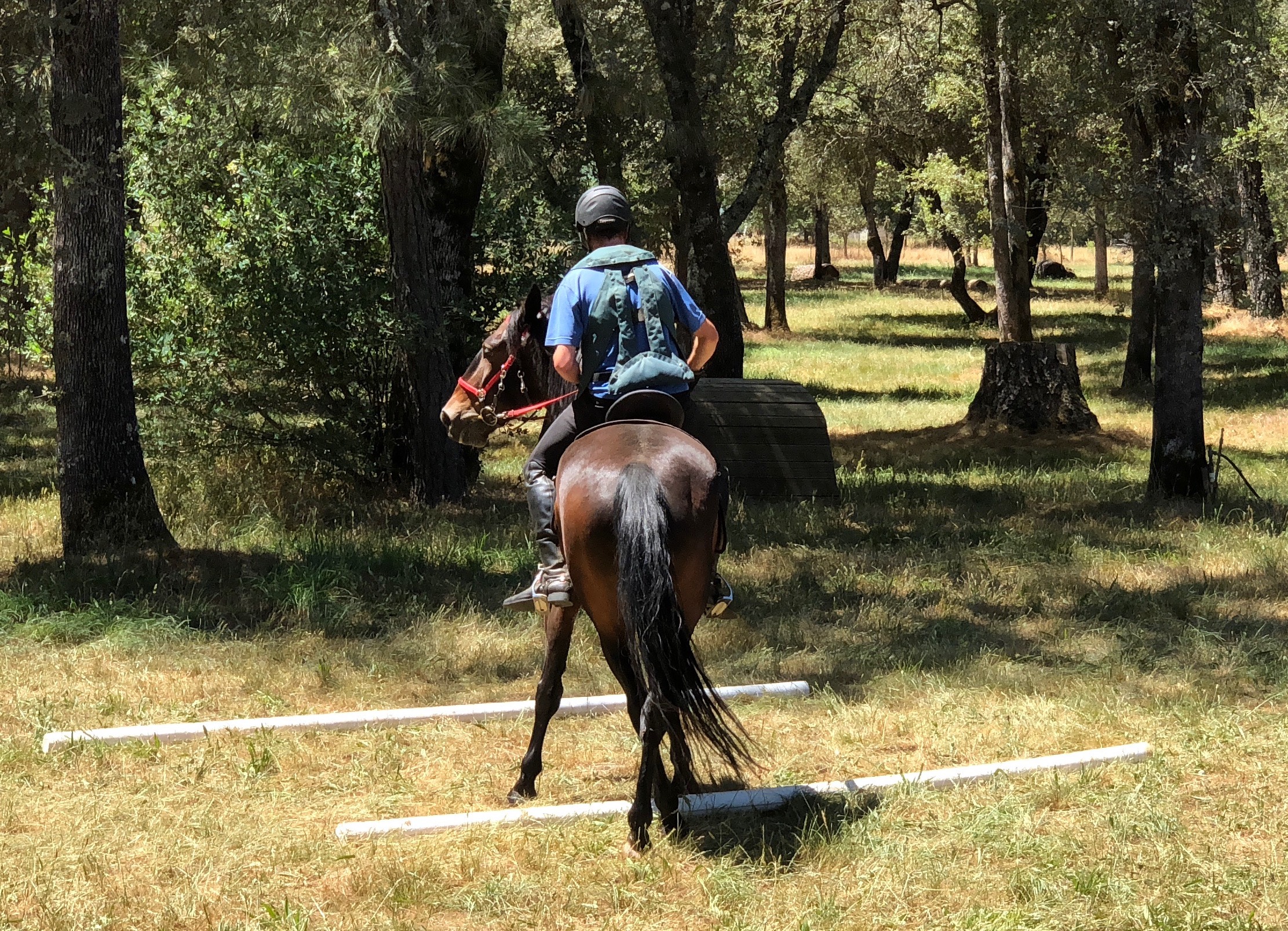 Once we did the ease of handling rounds, we got to do a speed round. My husband went first and had 4ish minutes and an elimination when he went left first (always go right first in WE) around one of the tree barrels. 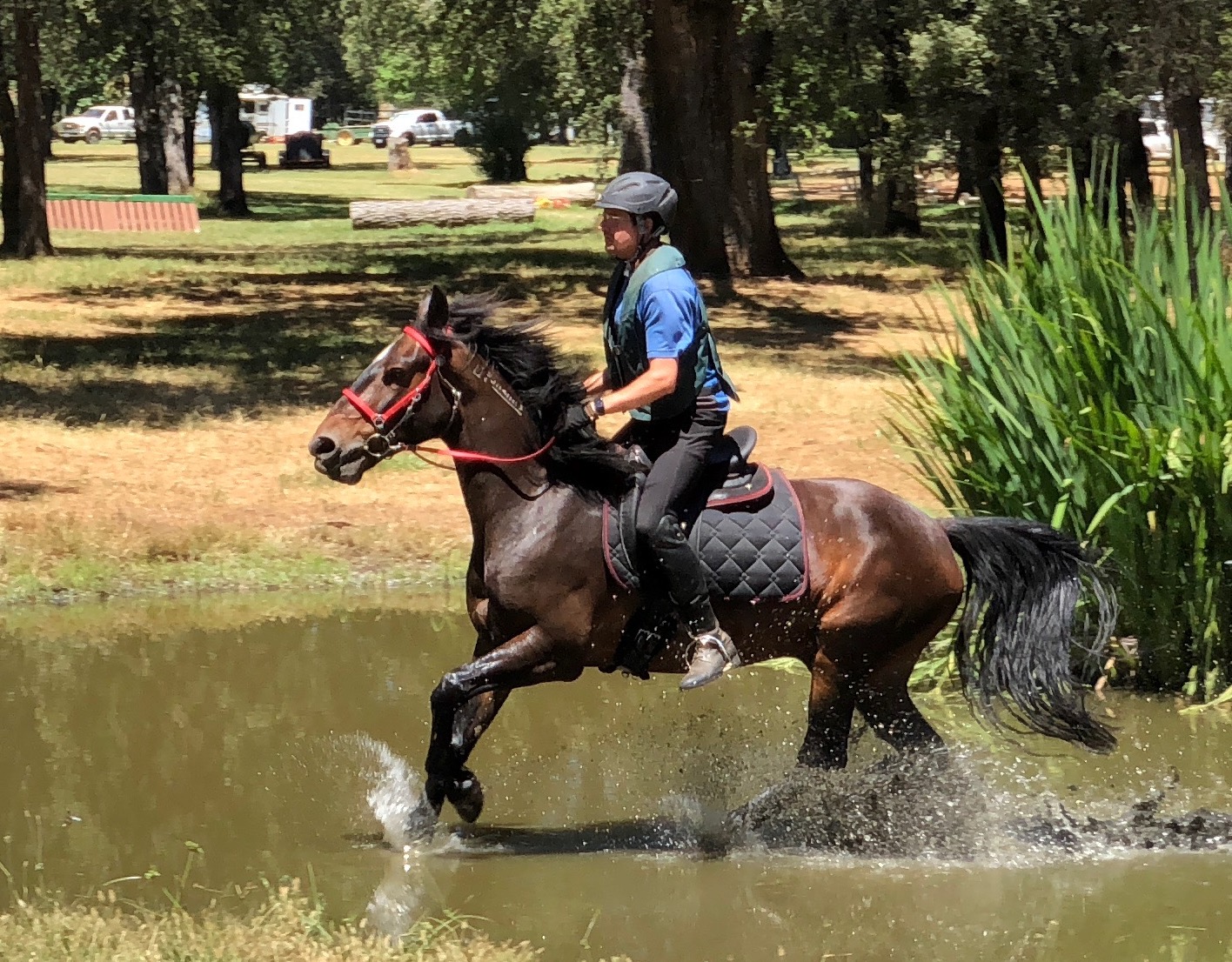 However, there are so many ways to get eliminated in WE, the trainer didn’t have anyone stop, she just added the eliminations up as points off. The other participants had a few eliminations as well and finally one girl managed to go clear, but with 8 minutes.

Speed rounds in WE are so fun. It’s kind of like XC in eventing; the goal is speed without penalties. It was also nice to just do something that was fun without any stressors. What girl doesn’t love running through the forest with her pony. 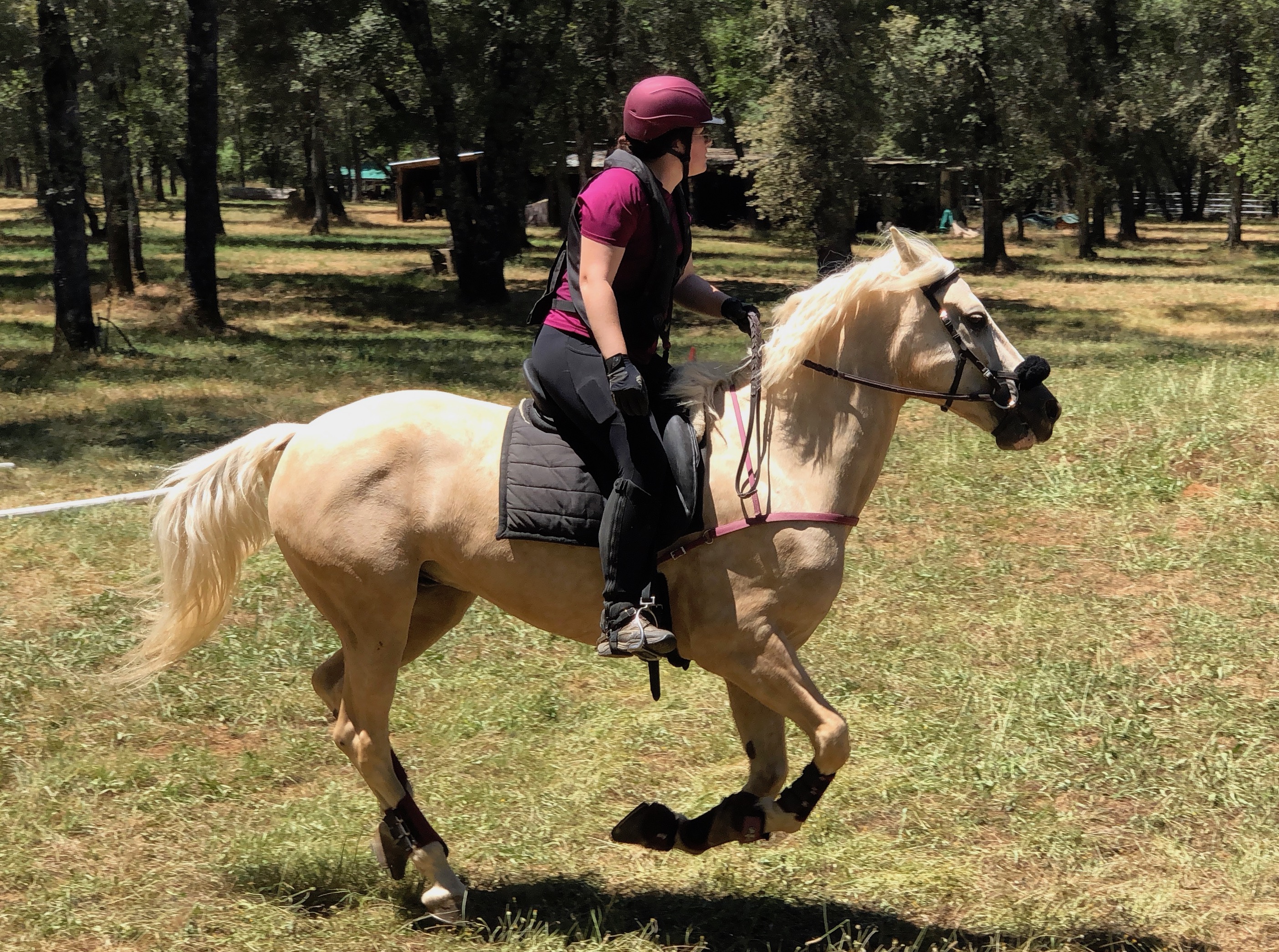 As an added bonus, we ended up getting 4ish minutes and zero eliminations for the win.

That evening we did another brief session with Kate doing some private cross country. This time I got straight on Levi without having Kate ride him first. He was mostly good although there were a bunch of people out and about riding their horses and he found that very distracting.

I love all the trees at Eventful Acres. #blmmustang #horsesofinstagram #crosscountry #crosscountryschooling #eventing

I have almost no pictures from these sessions because my husband and I were riding at the same time in different groups. He was doing XC with the head trainer and I was in the WE group with Kate. I put jump tack on and planned to do some XC since there were only 2 other people in that group and they wouldn’t be doing XC and getting him fired up. 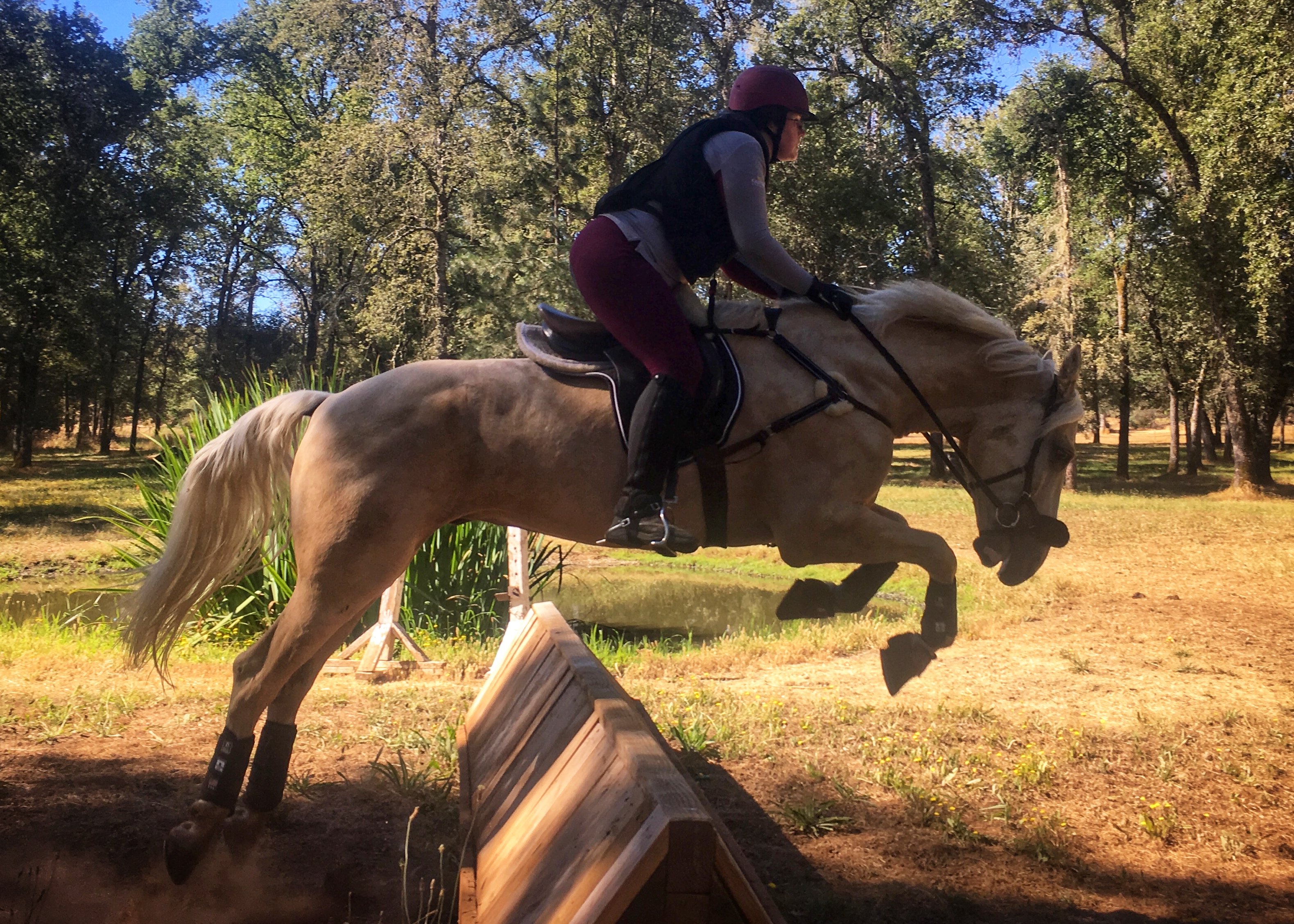 It went pretty well and we even did some jumps that weren’t tiny little logs. They were small BN jumps, but still, they were not 12″ logs. Levi did get a little distracted because at one point he could see Eugene off doing XC, which was super unfair to his mind, but I just dragged him back to WE world and made him watch them doing things until he got over it.

Then we went over to the grass field to do some more jumps because I wanted to work on doing jumps on hills. No pictures were captured of the hill work, but I did ask Kate to take a picture of us doing the feeder/coop jump that terrifies me. 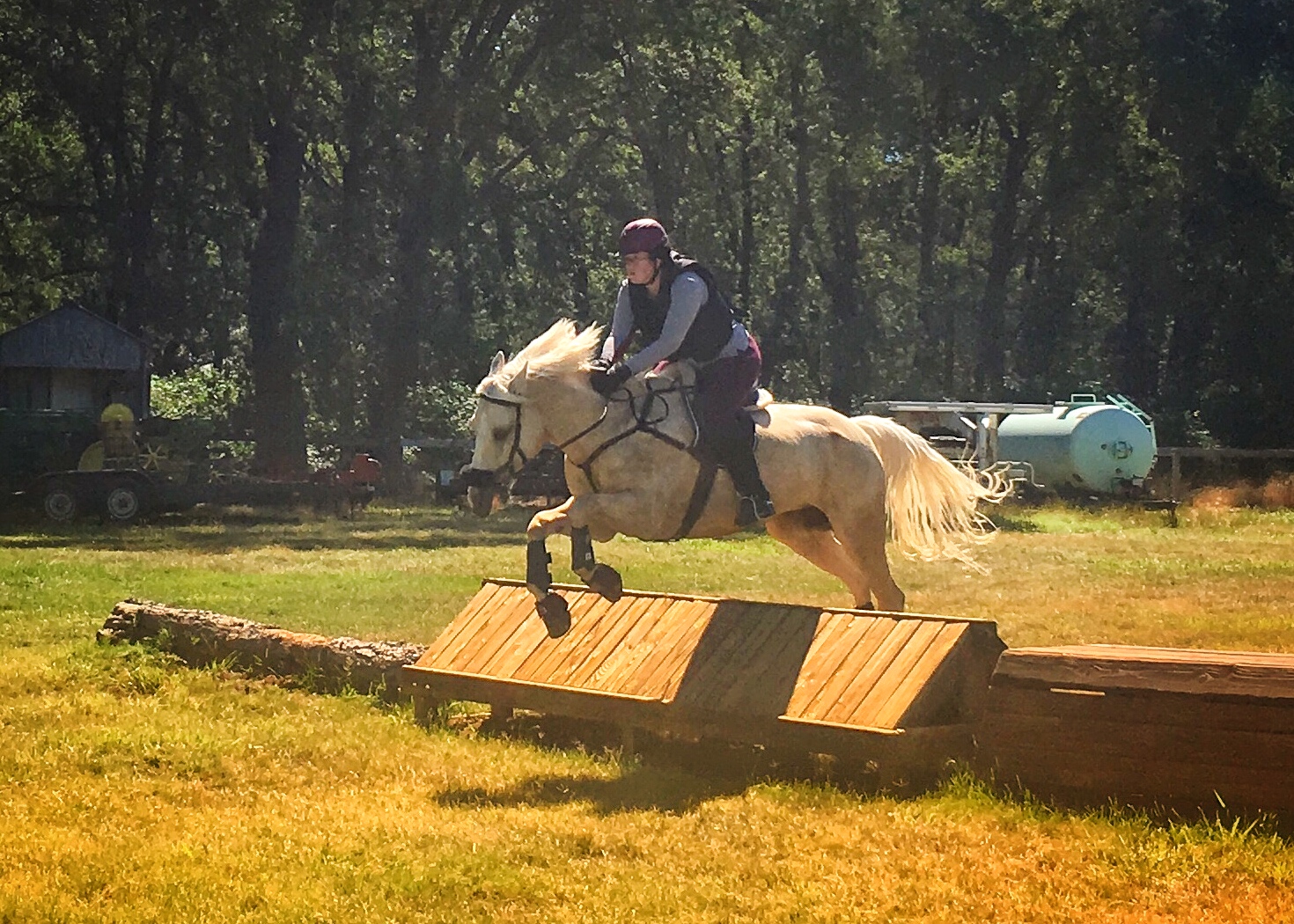 After we did that a few times, I decided to be done. The other people in my group were still doing a few things and I was standing in the shade watching them when I saw Eugene screaming and galloping towards me. I had enough micro-seconds to realize this was going to be bad and hurl myself off Levi in an emergency dismount. Unfortunately, I lost my reins in my attempt to get off as fast as possible. I had a brief moment where I almost caught him before he realized he was free, but then Eugene screamed again and he took off. There was another brief moment where they stopped to sniff each other in reunion and Kate slowly crept towards them to attempt a capture, but then they were off again.

My husband came jogging over at this point. He hadn’t fallen off. Eugene didn’t even have tack on and had escaped while my husband was putting him away after the lesson. Just as he arrived, the boys took off. The owner of Eventful Acres had closed 2 of the fields for this last day to irrigate them. He had strung caution tape up across the entrances to those fields and told us to stay off them with horses to protect the wet ground and the irrigation system. So of course the two newly freed Mustangs made a straight bid for those fields, merrily jumping the caution tape on their way. Then they decided to run out onto the road (thankfully a mostly deserted dirt road) and gallop down that for a bit.

Finally they returned to the property via one of the closed off fields and stopped to sniff noses with another horse someone had brilliantly brought out to entice them. Since Levi was still tacked, they grabbed him and Eugene stuck around long enough for my husband to catch up and grab him. That was a rather more exciting end to camp than I needed, but the horses weren’t harmed and Levi didn’t even manage to break any of his tack.