I’ve had a lot of success with our horse chiropractor. Enough that I actually decided to try going to a human chiropractor again. Which is a whole other story, but it does seem to be helping. I’ve noticed in the last few weeks that Eugene’s back leg was acting up, so I set up an appointment. 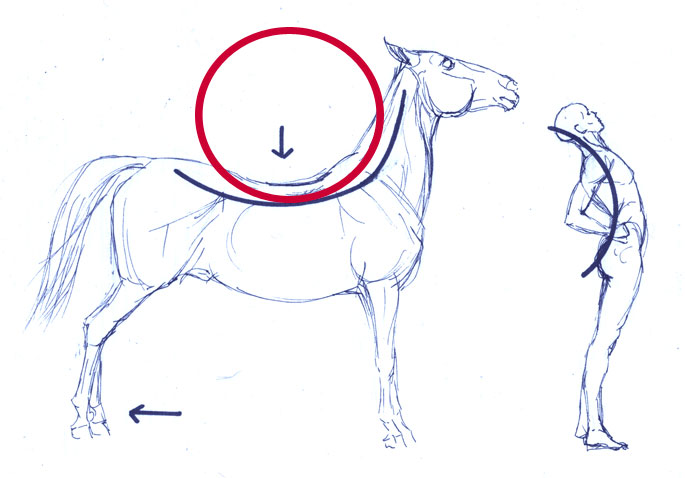 His right hind leg, which is coincidently his one leg with white on it, has been a problem since we got him. The original trainer we had him at thought he was lame, but he – of course – recovered for his vet appt. The vet did think he was weak in the back and needed to build muscle. His hoof on that leg was also weird so we had our farrier trim him and we had our chiro go and visit him. Since then he’s had hock injections and he tends to warm up out of stiffness on it.

Recently, however, Eugene wasn’t warming out of it, so I decided to schedule a chiro visit. The first time I had him come out to our barn, I asked everyone at the barn if they wanted him to look at their horses and no one did. One person brought their dog though. The next time he came out, I convinced a fellow boarder to try him and she loved it. This time, almost everyone was in and we had 8 horses, plus a dog to treat.

We started with Shasta who had her left T12 and right T16 with ribs out as well as her pelvis and left C3. The Chiro kept asking if I’d noticed certain behaviors and I, unfortunately, couldn’t answer as I don’t ride her. Hopefully all those fixes will help her though. She does love the chiro. 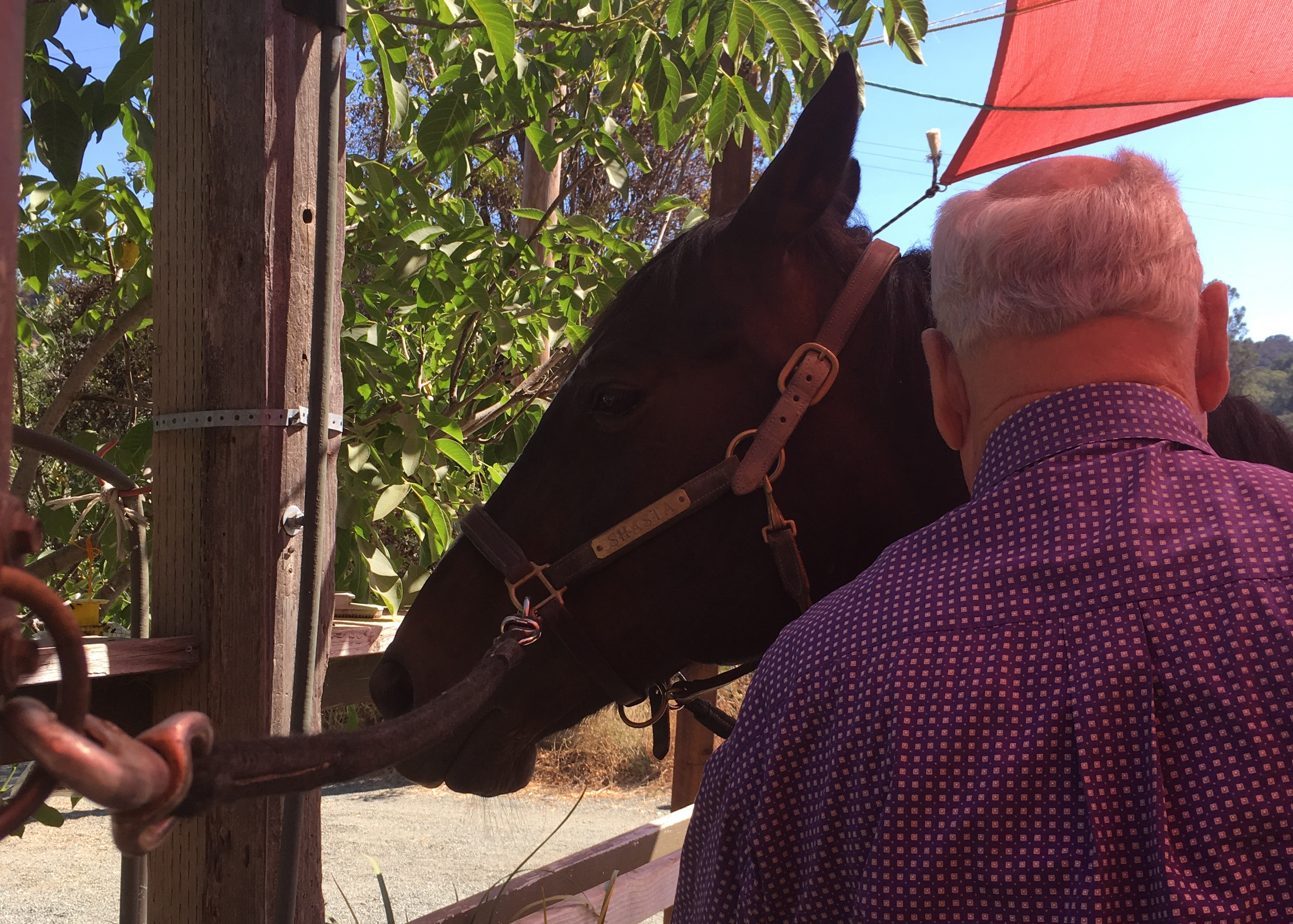 I forgot to get pictures during Eugene and Nilla’s treatments. Nilla was very well behaved because she absolutely loves the Chiro.  Nilla’s back right pelvis was out, which he said would cause her back end to drop out behind her. We have been having that problem lately, but I think it’s her hocks acting up. I’ll be happy if this helps though. He didn’t find anything in her neck and I was complaining about how I had hoped he would find something wrong to explain all of her attitude about going on the bit recently. He said her TMJ was really tight and asked if she was due for dental. No, she just had that in May. Was in a really long dental or a bad dentist? I don’t think so. So he played around looking in her mouth and even gave her a carrot to watch her eat. Then he managed to pop her right jaw back into place. I could hear the pops. It was pretty disturbing. As soon as he did it even I could feel how much her TMJ had opened up. I really hope this helps her. 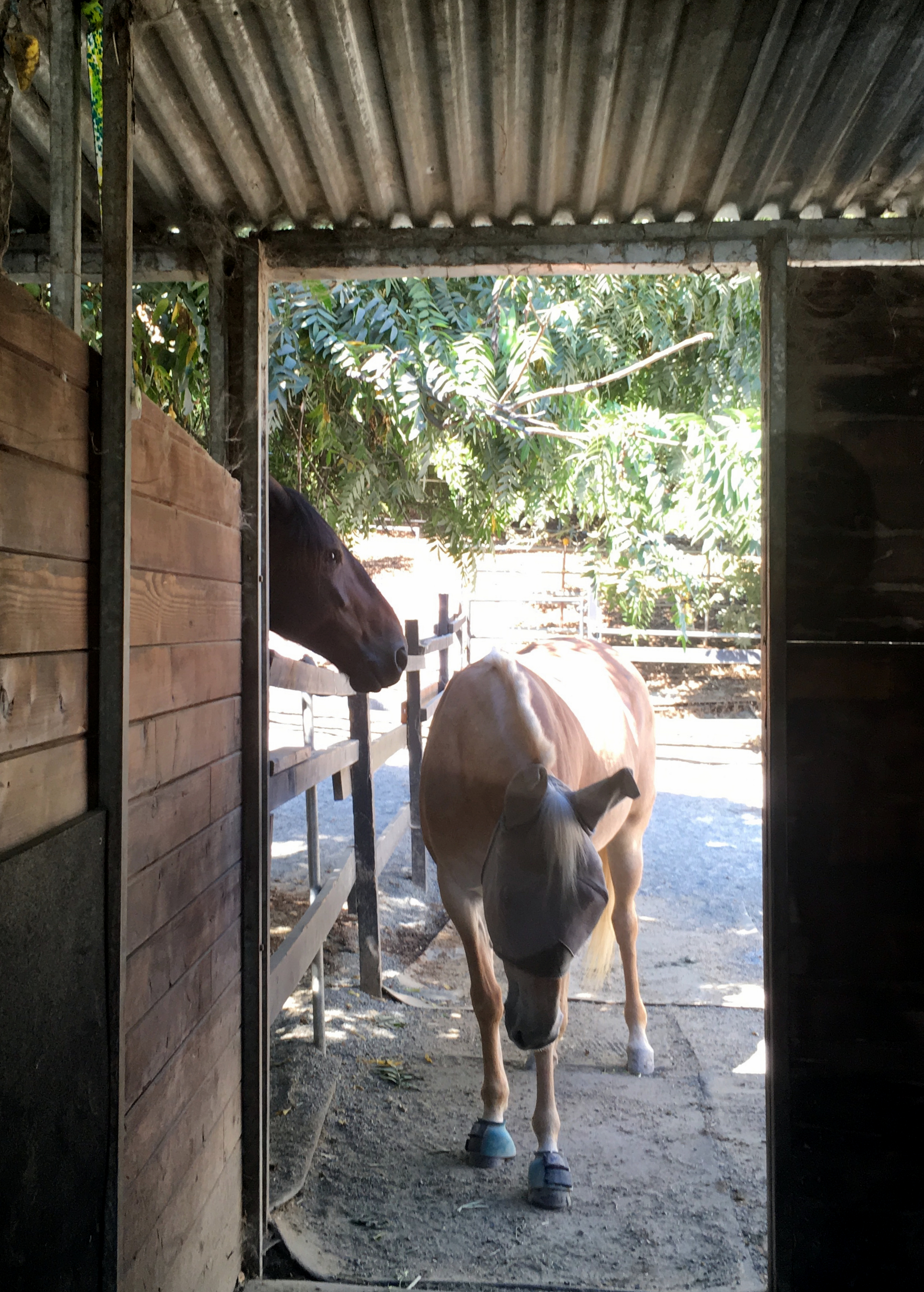 Eugene loves his mule. I found him hanging out like this when I arrived. When I returned her from her Chiro, he whinnied at her. Even though he could see her from his stall the whole time and she was less than 30 feet away.

Eugene was not so awesome for his treatment. He’s getting better and better about strangers and he’s met the Chiro before, but he was very suspicious. Especially as the Chiro was poking at painful areas. He didn’t do anything bad, but was on high alert and kept swinging around in the cross ties to get away. He ended up having his left T16 with rib and right T15 out as well as his right sacrum. The chiro said that can be particularly painful. Since that’s the leg he’s been looking off on, I’m hoping we found the cause.

I ended up pulling Dijon out for his new owners since they couldn’t be there. It was a good thing they chose to get him done as he had his left T3-4 out and that was causing a pinched nerve down his left front leg. He was so numb that the Chiro could poke him with a pocket knife in that leg with no reaction.

He got everything popped back into place and then jumped at just a pen touch to the leg so it really seemed to work. Dijon is such a clutz even with fully functioning nerves that he definitely needs his legs to not be numb.

The Chiro also saw 4 other horses at our barn so it was a very successful day for him. I’m really looking forward to trying Nilla after her 2 days off to recover. Every time he comes to work on them, they go so much better for the next ride. Does anyone else like using a horse chiropractor?