On Sunday, my husband and I ventured forth to RDLA for another Horse Trials. Nilla was still on a time out for her hocks so this time I got to play groom for my husband. Of course, that mostly consisted of me reading my book, yelling at my dogs for barking at everyone, and playing photographer. Wanna hire me as your groom? I did braid Eugene’s mane though so I guess I’m good for something.

Dressage was Intro B, which my husband thinks is the easiest dressage test ever. I think BN is easier since Intro has two halts. Of course, Eugene is actually good at halt, so that makes Intro easier for them. 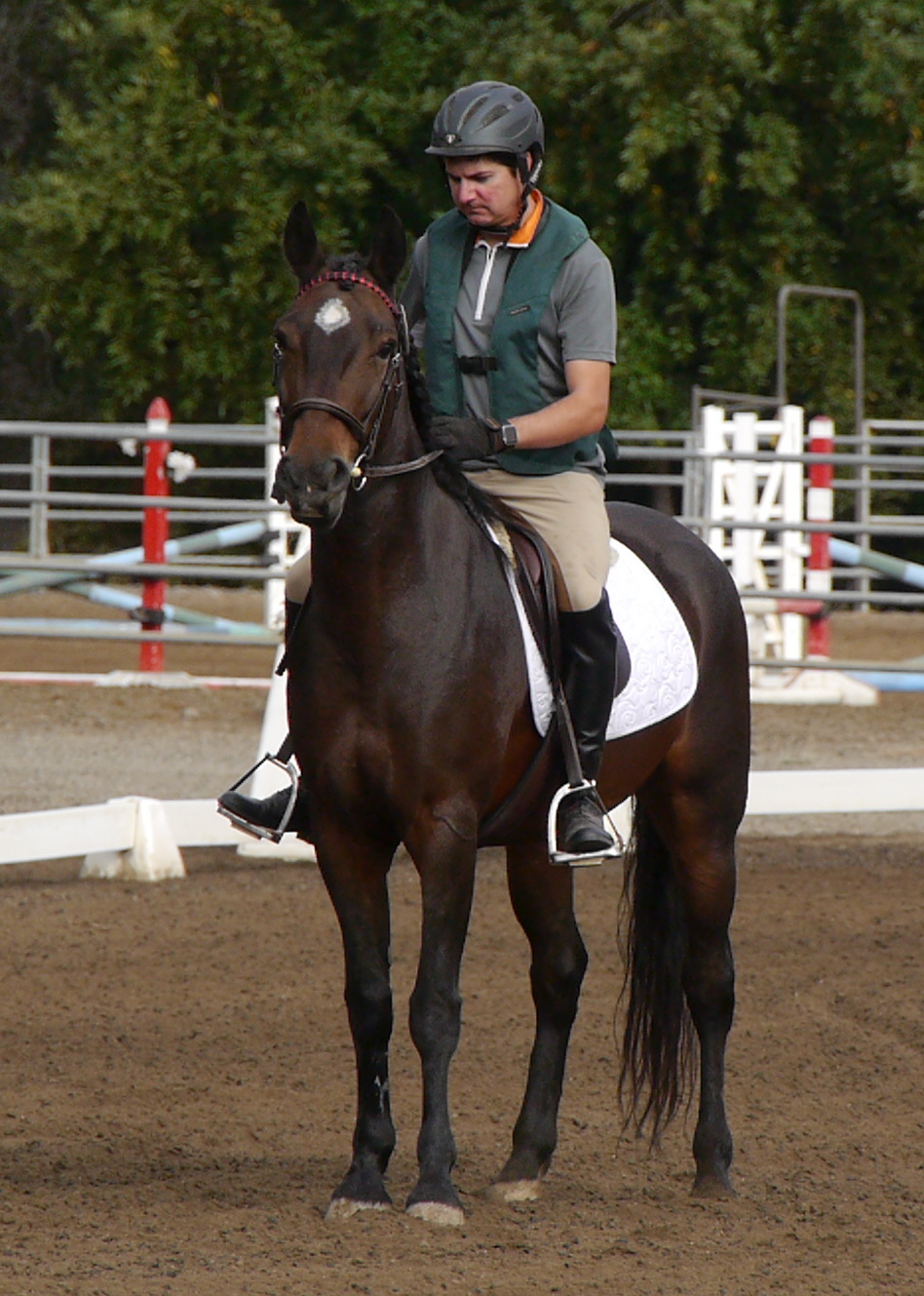 This show was very under-attended. Most of the RDLA shows are pretty small, but that’s part of what makes them nice. They’re good schooling shows. This one only had 5 entries in the HT across 3 different divisions. There were a few other people doing dressage only, but it was still pretty small. There were only 2 people in Intro and – for the first time – my husband’s competitor was another guy! It’s good to see more men out there riding and competing. 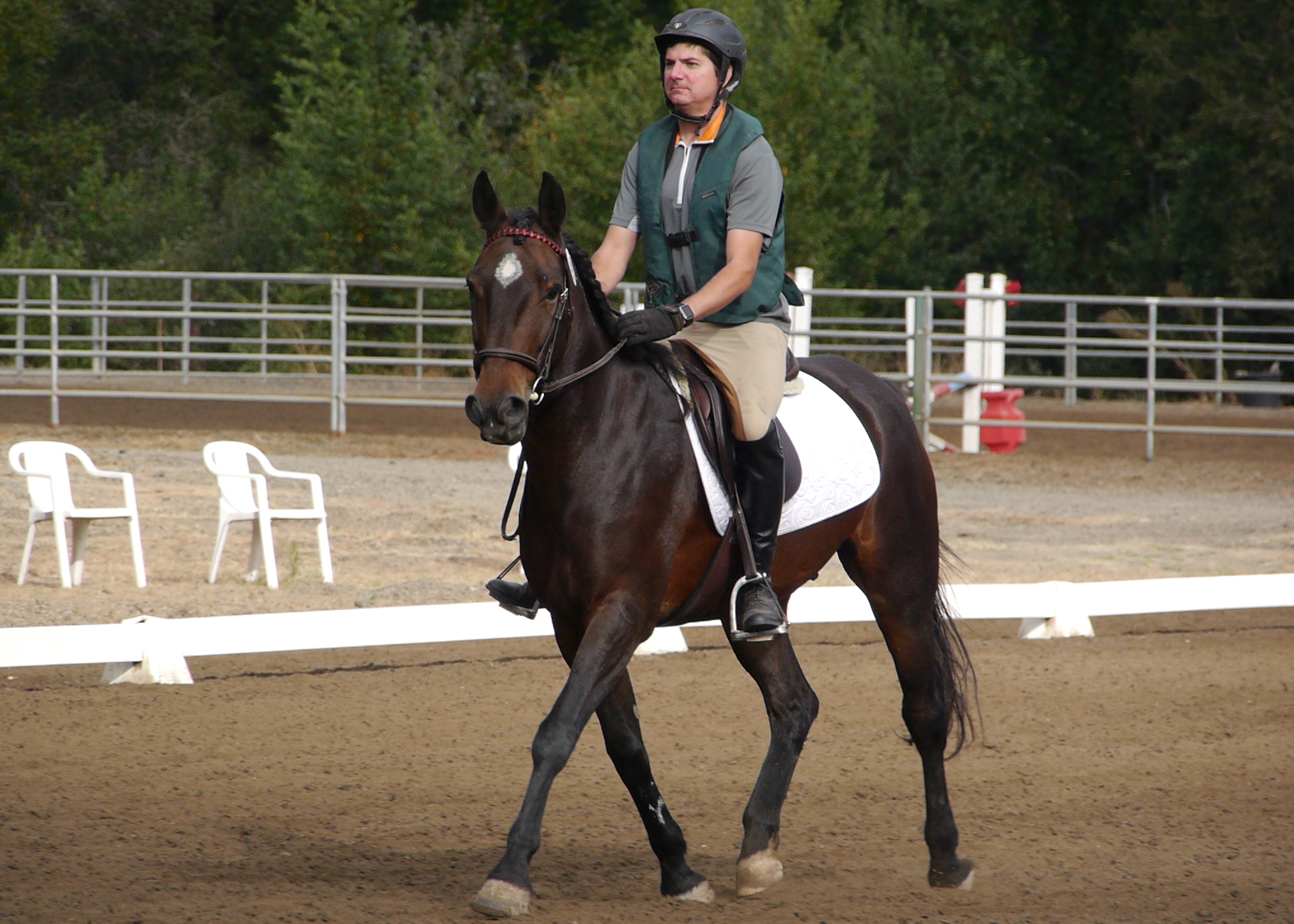 Eugene was so much better this time. He was much more relaxed. He’s still green and there were some awkward moments, but the whole thing looked a lot better than the last time we were at RDLA. We actually had a few people comment on how much better he looked. 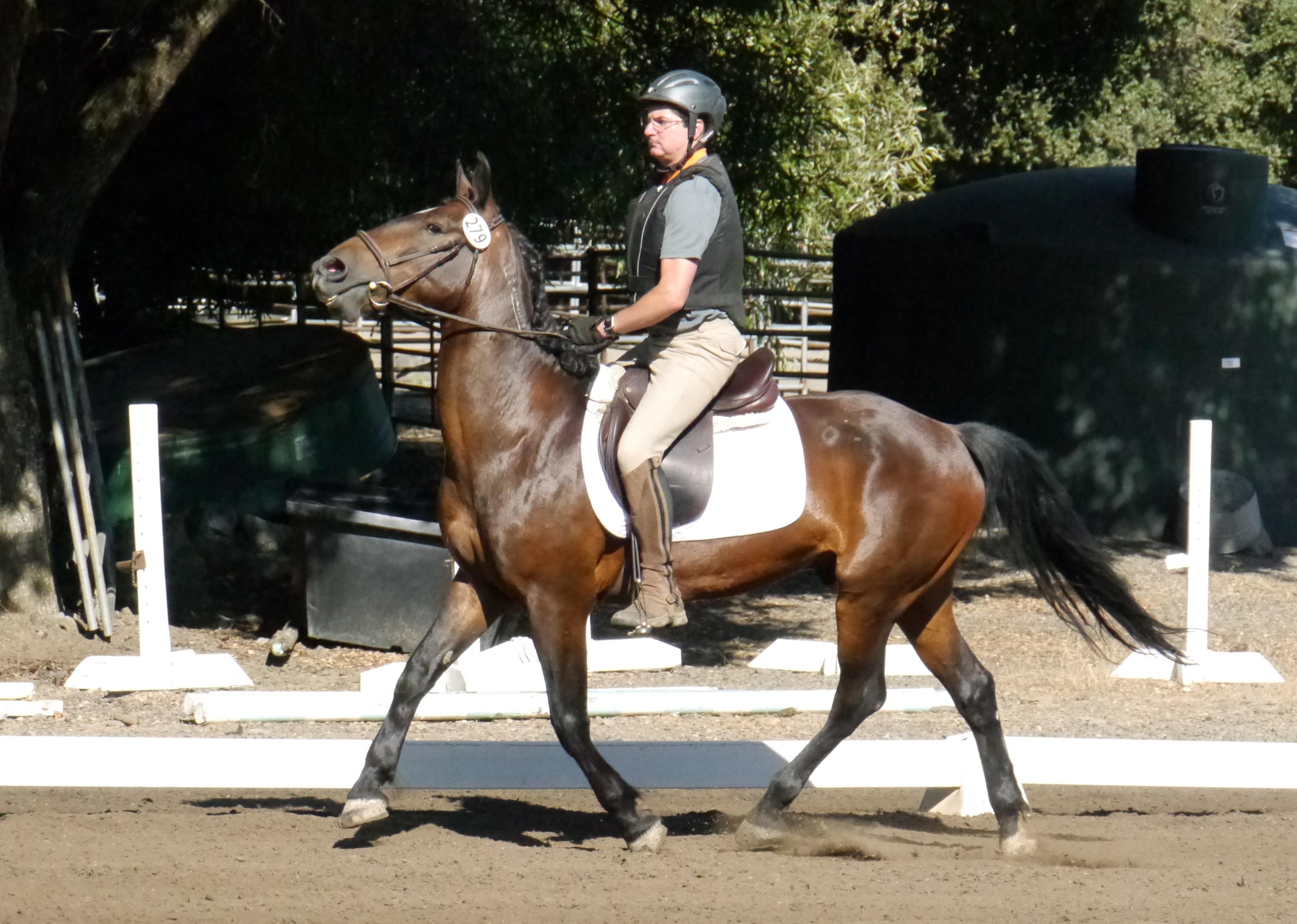 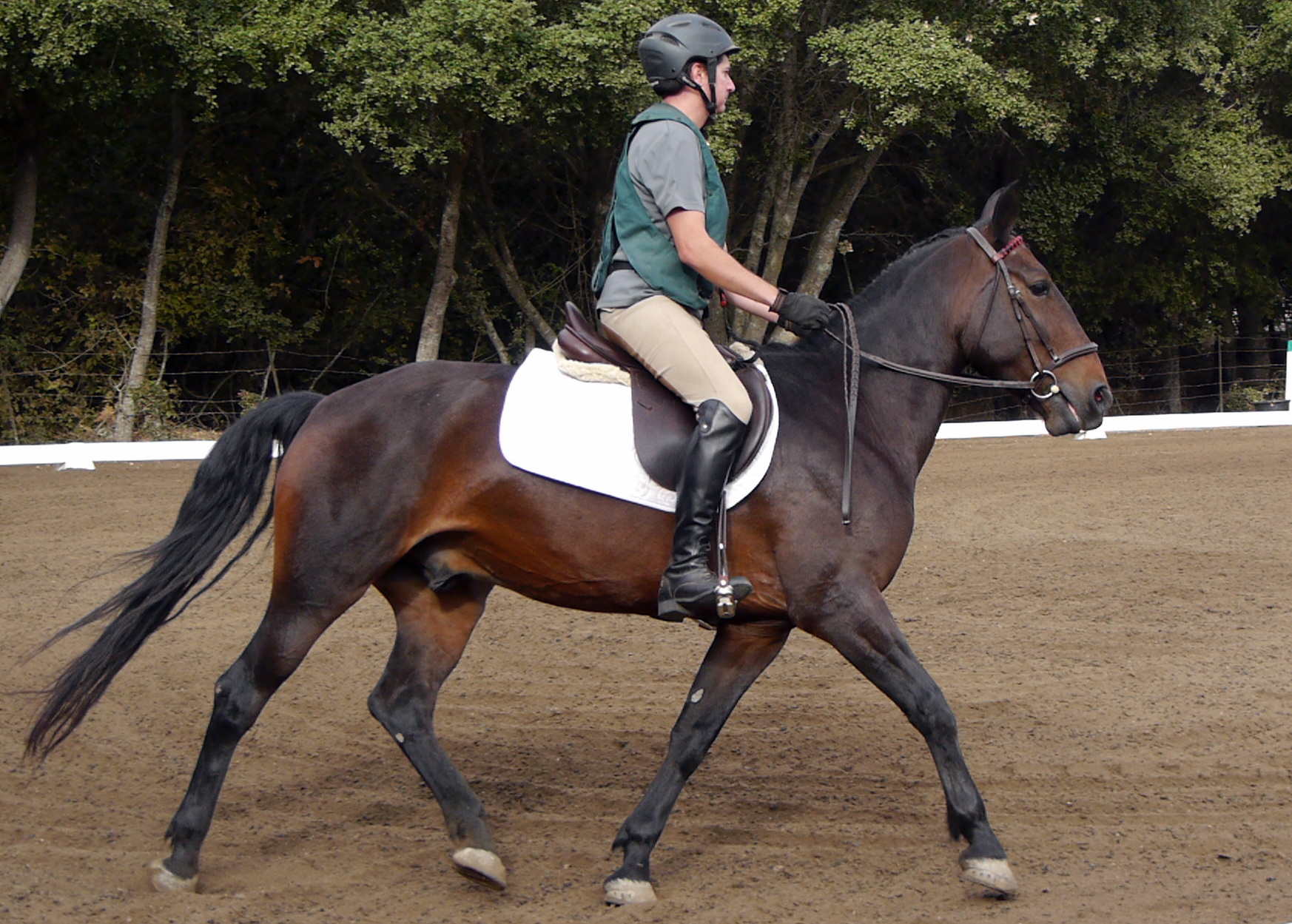 They ended up with a 35% which we both thought was rather generous, but hey, schooling shows, right? They even got an 8 on final halt. This put him in first by 1 point.

We had a break before jumping and got to watch some other people do dressage. Including fellow NorCal blogger, Kate. 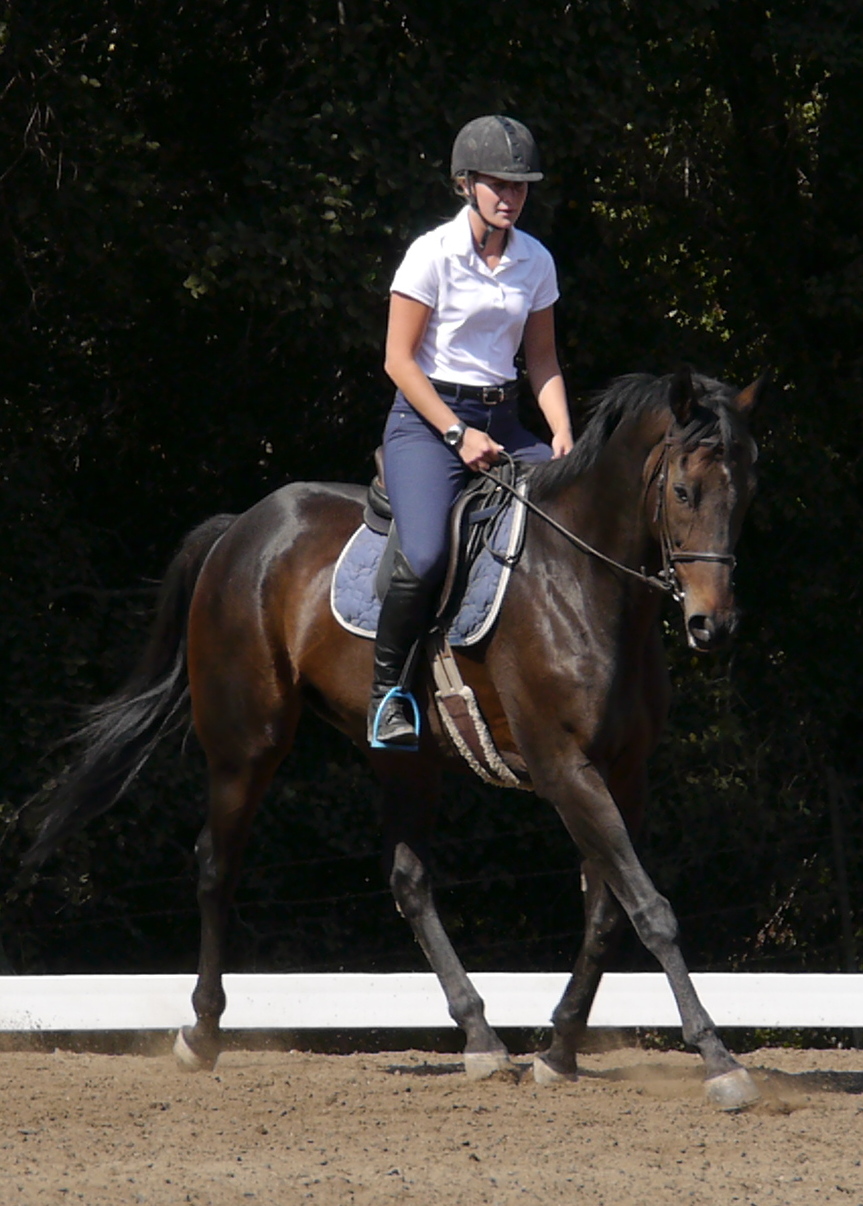 Then it was time for the fun stuff. We got Eugene tacked back up for jumping. I had made him a new fly bonnet just the night before. He looks pretty good in his matching gear. 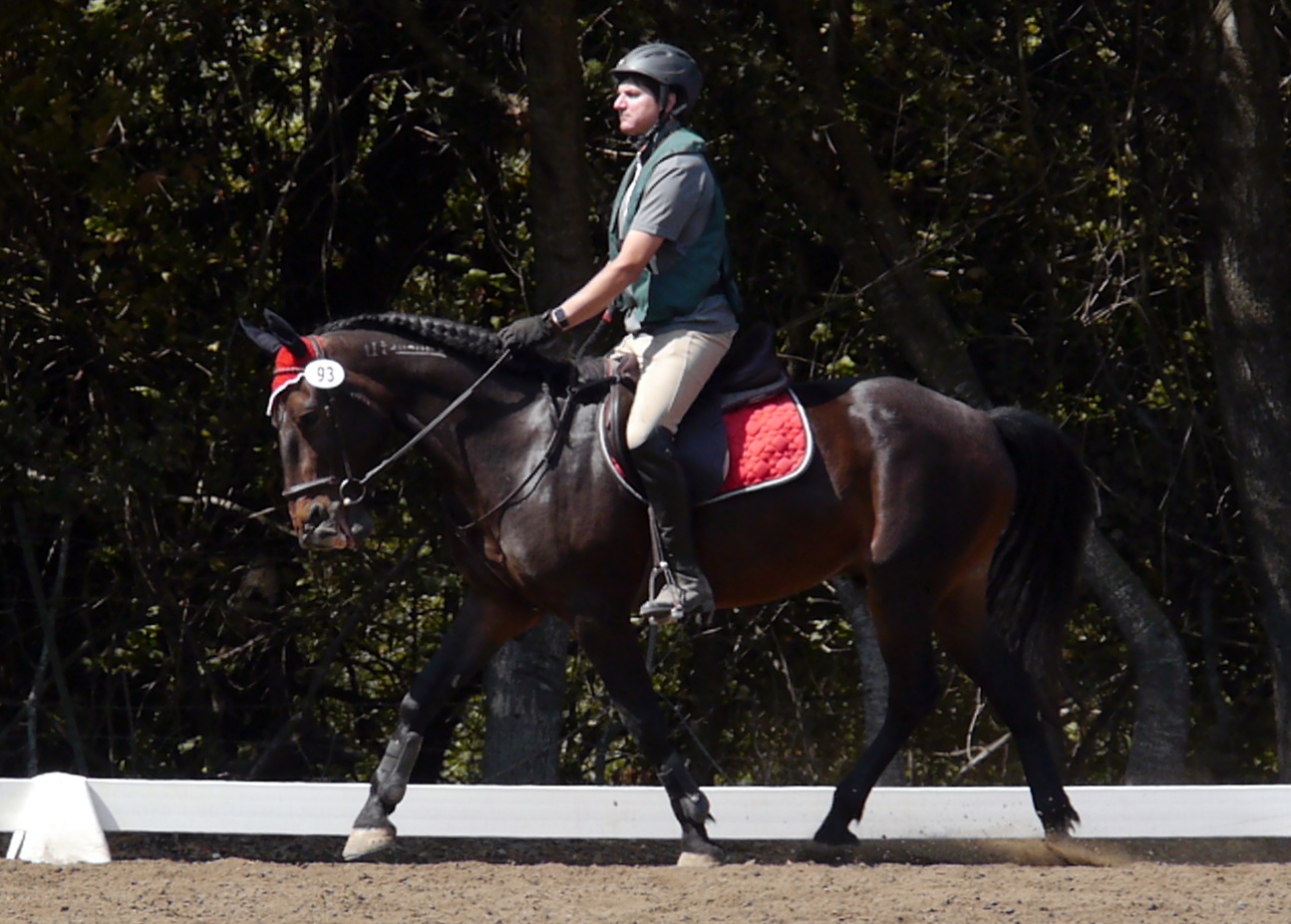 As usual, Eugene was a good boy. He still doesn’t 100% get stadium jumping. While cross country seems to make sense to him, stadium is a struggle. But he popped over all the little jumps and was clear. 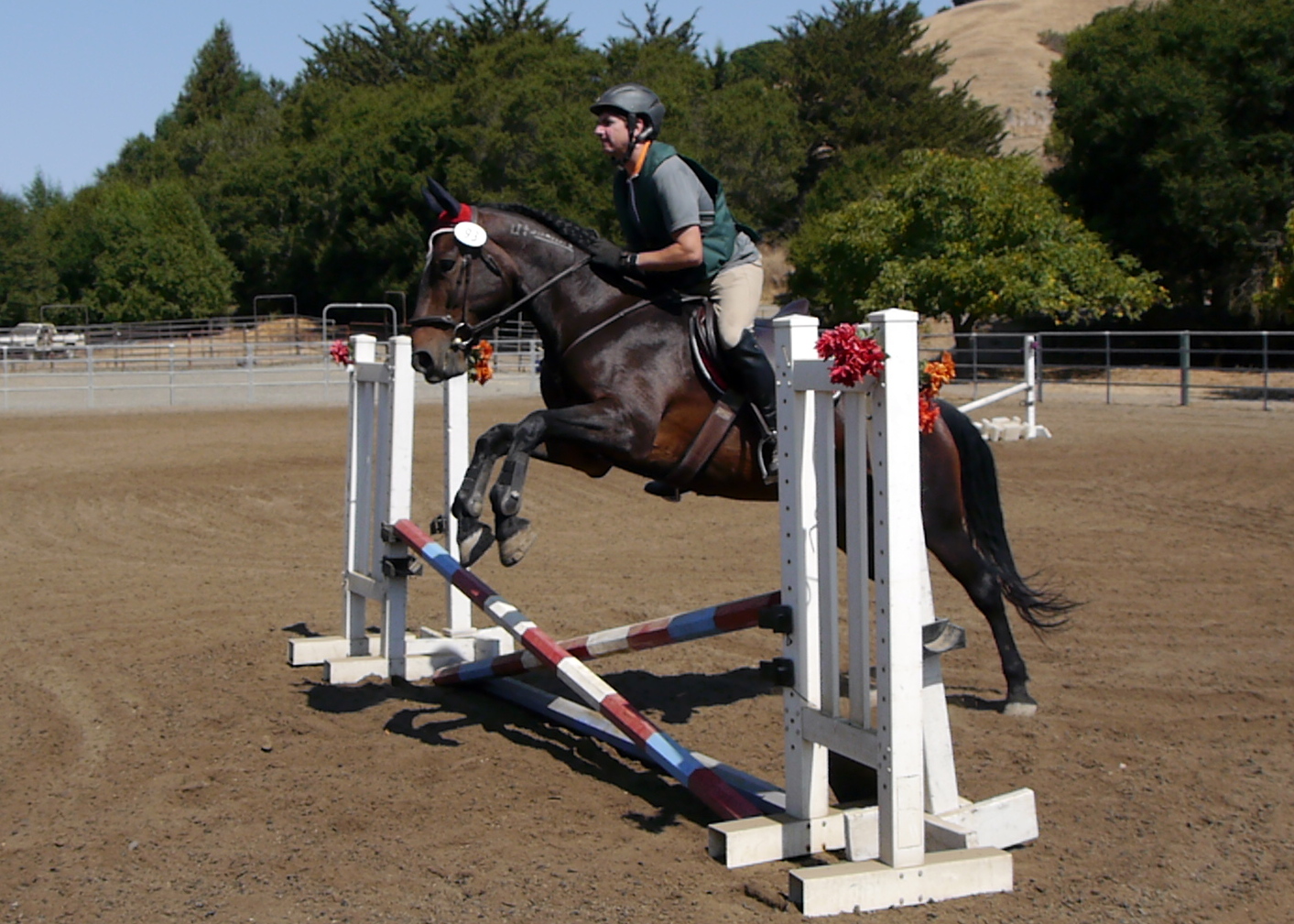 This show offers the chance to do a second round. My husband has spent years jumping Shasta who would prefer her rider leave her the hell alone especially in regards to jumping. Unfortunately, Eugene doesn’t have Shasta’s training and natural jumping ability. So he actually needs my husband to keep leg on and not abandon him right before the jump. They had a few bobbles during their first course, so I had my husband re-do some of the jumps and push Eugene forward a bit more. 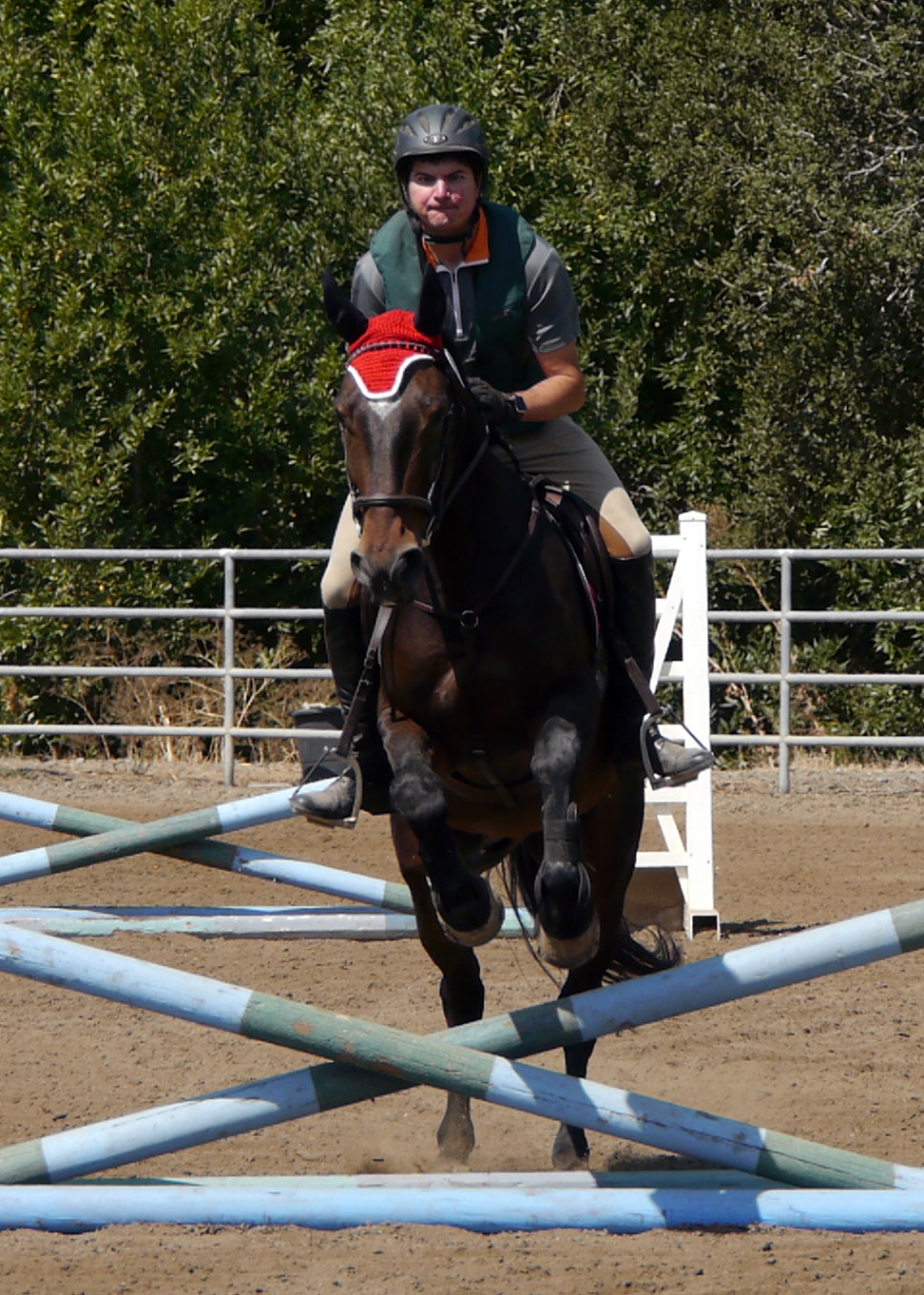 We had gone up and walked the cross country course earlier. It was a cute course. Mostly little logs, but a few bigger obstacles. You can check out our coursewalk here.

Unfortunately, I’ve lost my helmet camera so no video. I did manage to get a few pictures though. Eugene was happy to get out there and run around: 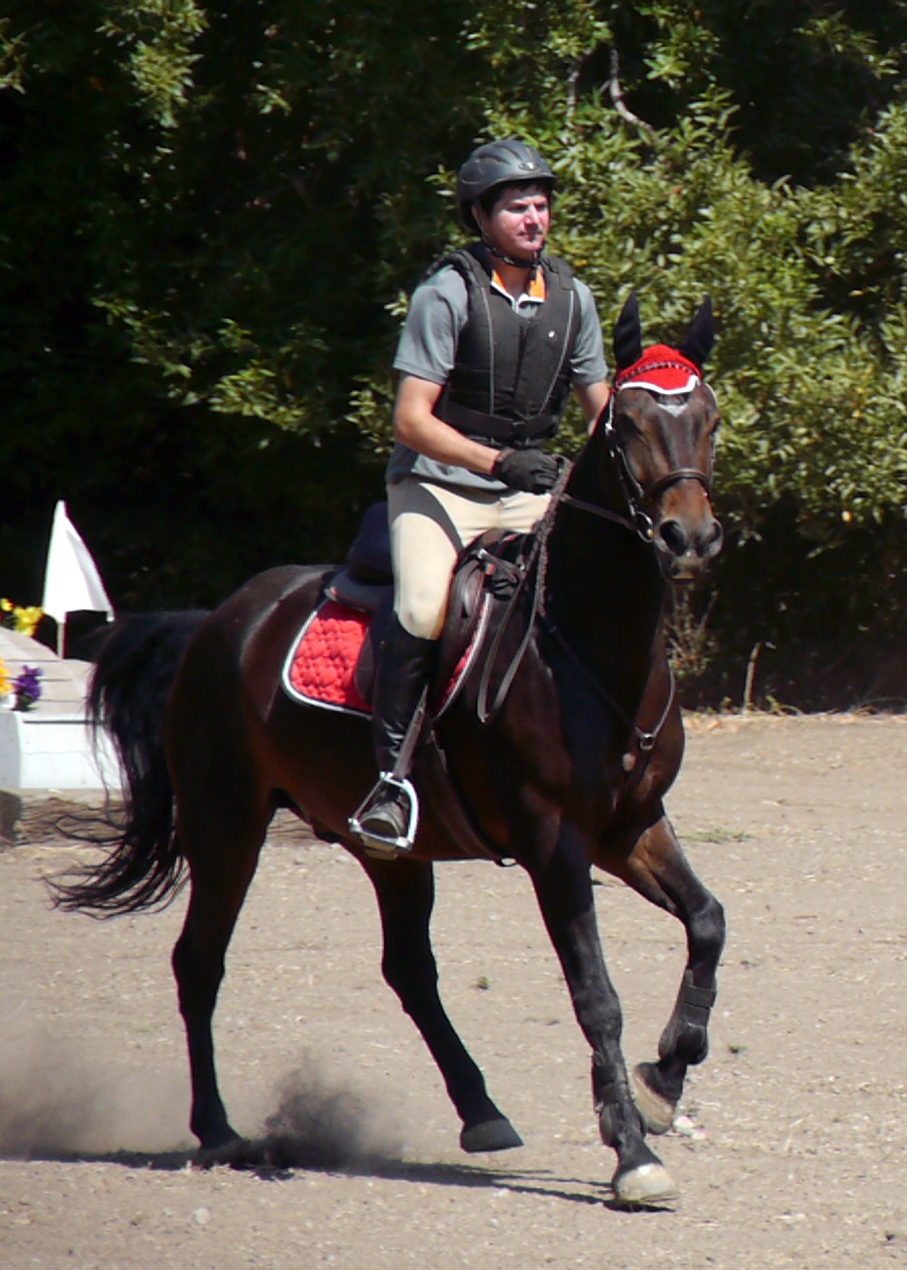 As I said, Eugene gets cross country. I think it goes back to his love of trails. Cross country is a just a trail that he gets to go fast on (which is how he’d prefer to do all trails thank you) with obstacles. 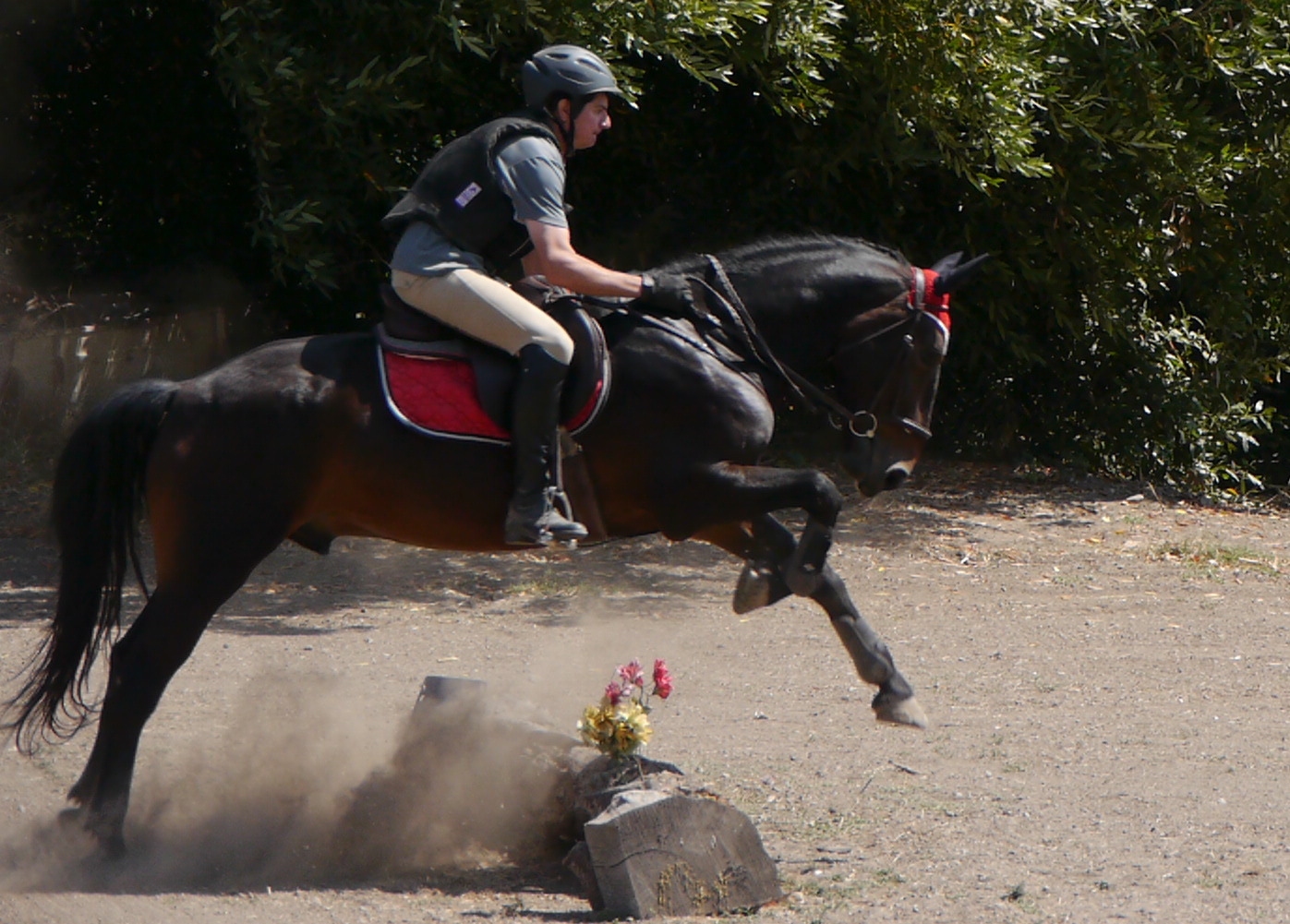 They were clear over the first 9 and at the 10th jump, Eugene just came to a slow stop. He never stepped back and hopped it from a stand-still so the judge called in not a refusal. I don’t actually think the jump was under 12″ to qualify for that rule, but hey schooling show. 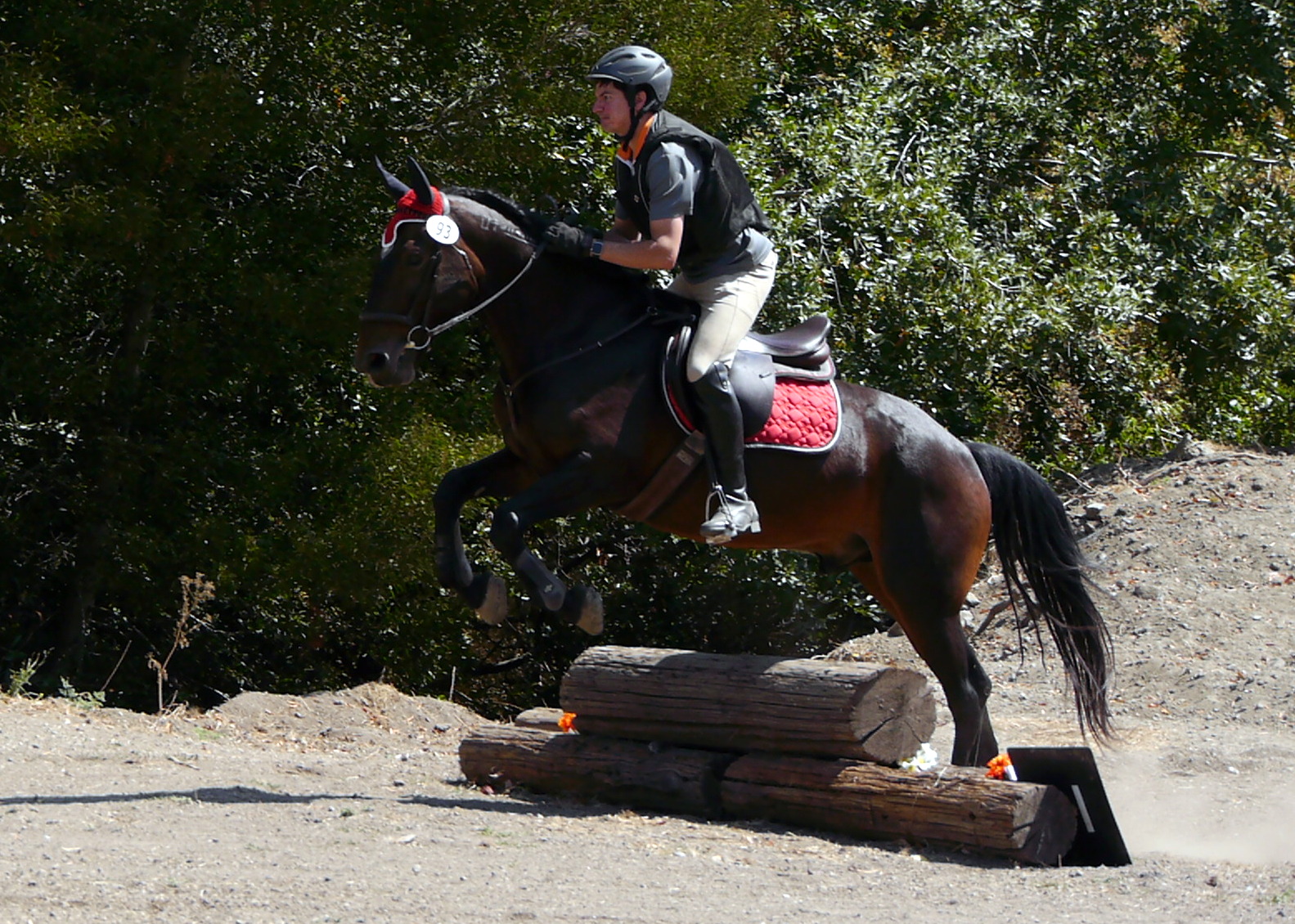 After everyone else did their XC, we did a bit of schooling. My husband re-did the scary box at 10. Turns out, if my husband doesn’t stare at it, it’s not an issue. Speaking of staring, my husband also wanted to school the ditch. They did it the first time around no problem. Then they turned to do it in the other direction and Eugene skidded to a stop. 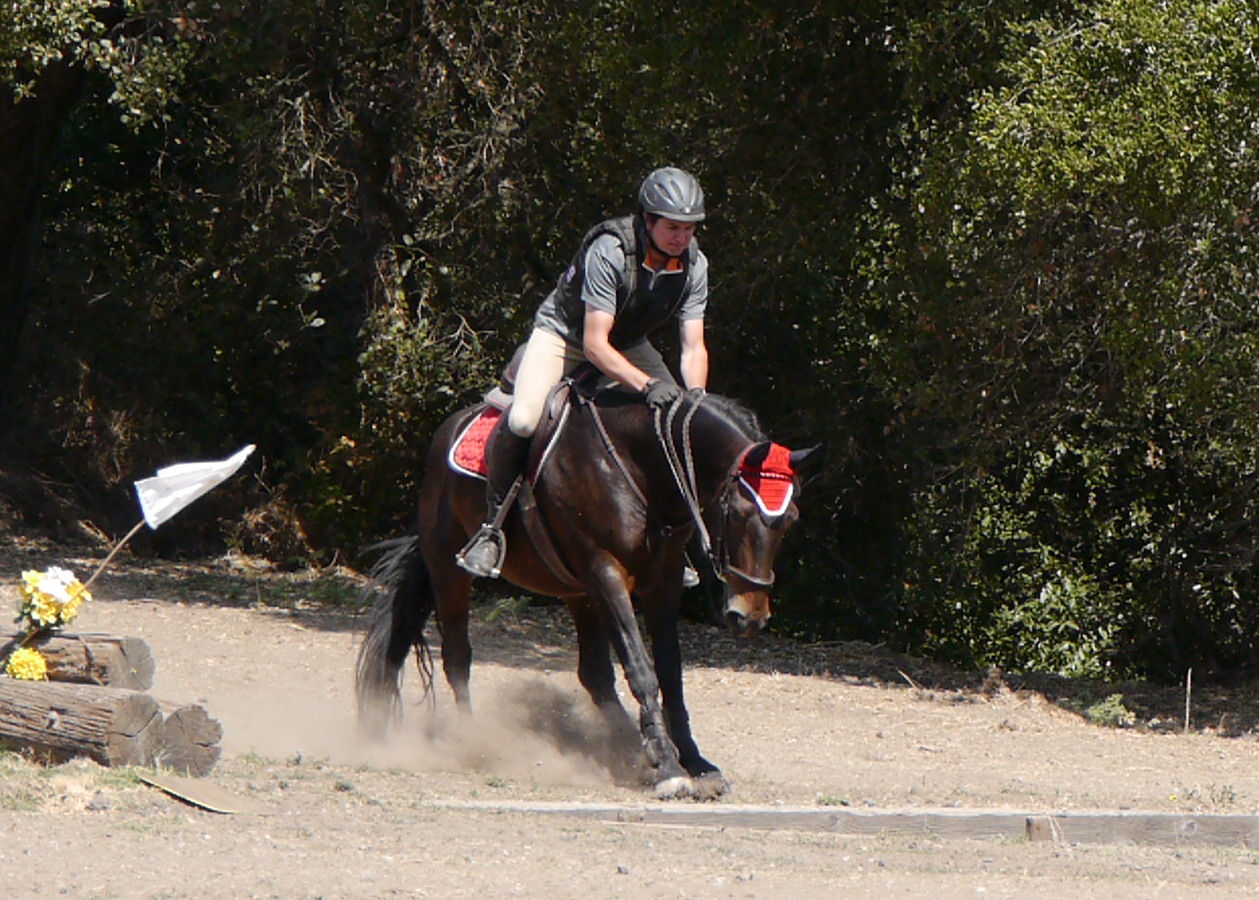 I had to explain to my husband the phrase “green and green = black and blue.” My husband has a bad habit of staring at jumps. He knows he has the habit, but fixing it is a different issue. And he doesn’t have a packer to carry him over everything anymore. Poor Eugene didn’t know why the ditch was scary, but he knew his rider was certainly staring the hell at it. They did eventually get over it and went back and forth a few times to confirm it. 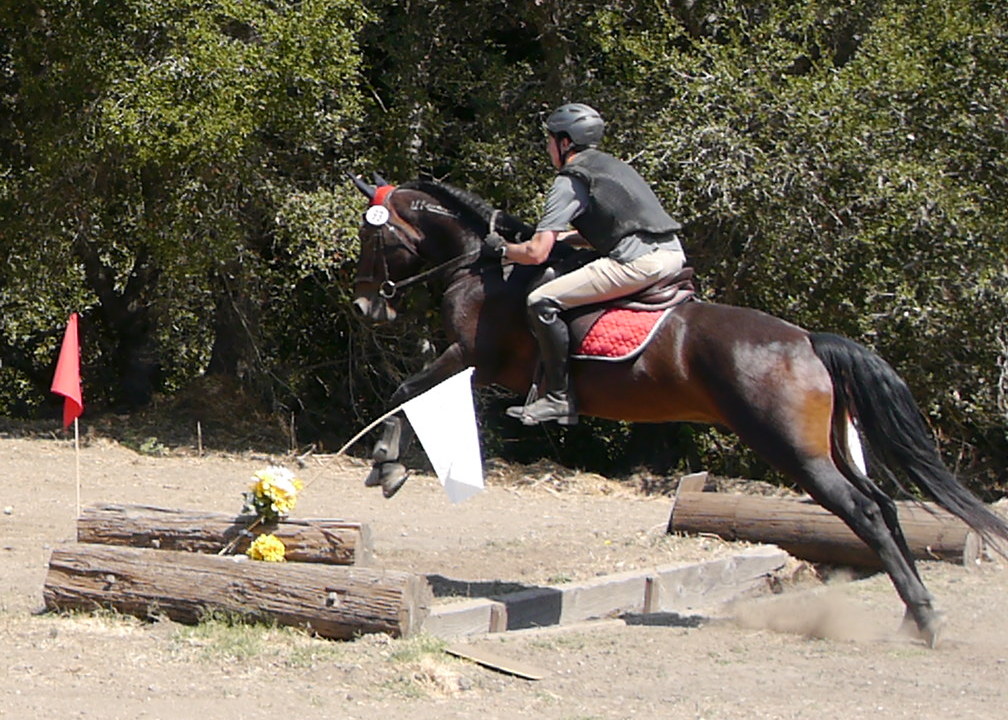 When we got back from schooling, it was ribbon time. My husband managed to maintain his 1 point lead and win the division. 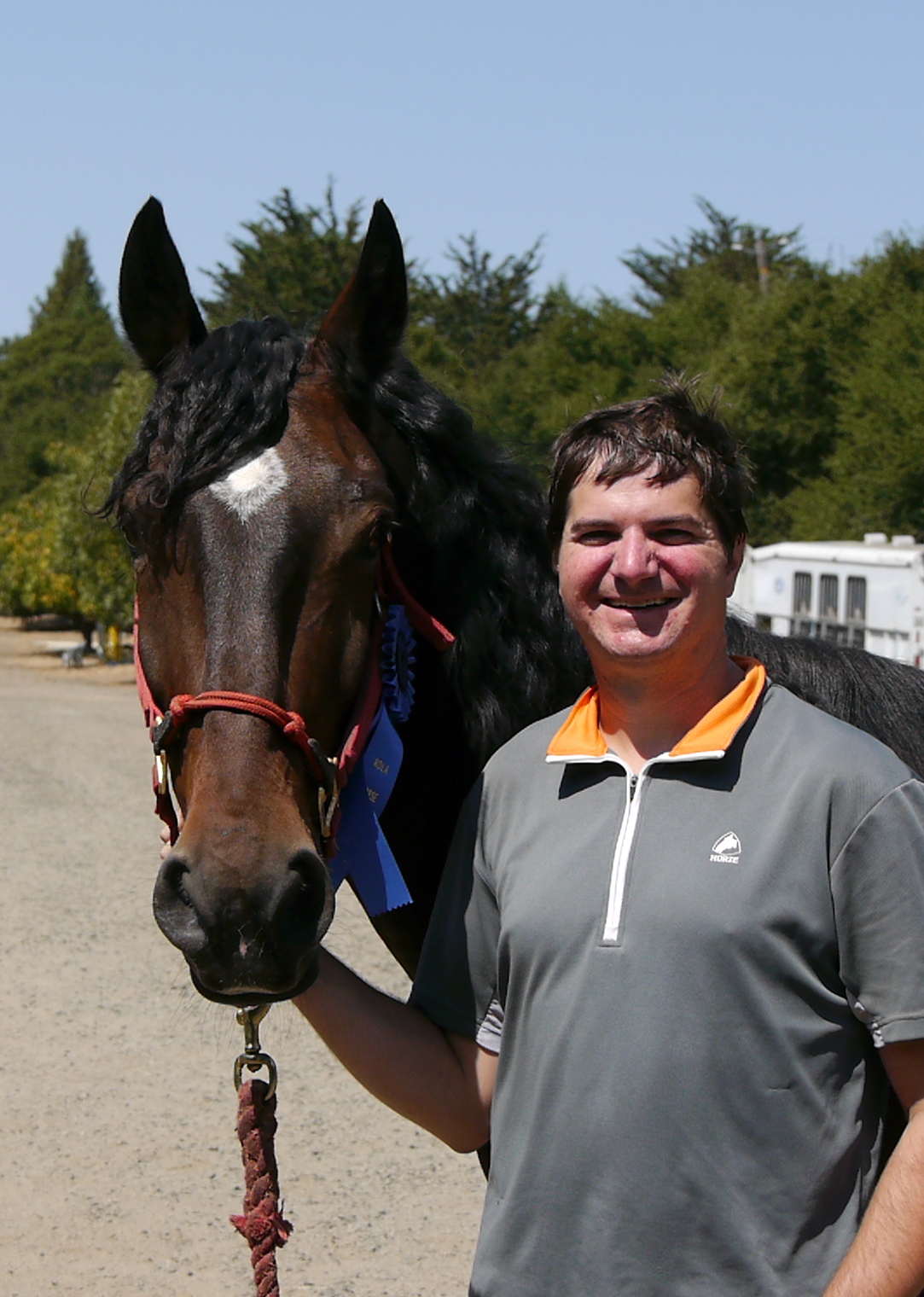 Although the ribbon is awesome, the real success was how much Eugene has improved in just the few months since his last show and how much he’s improved in the time we’ve had him.