When we left off yesterday, my husband had finished his dressage courses and we only had the derby left. The office had predicted the Derby would start a little after 4 so we had time after dressage to go back to the trailer and change out Eugene’s pad before the class. My husband also cleaned his boots and I tried to brush Eugene’s girth down. The swampy footing had really covered everything in mud. My husband had actually managed to get mud splashed all the way up on his thigh during jumping. 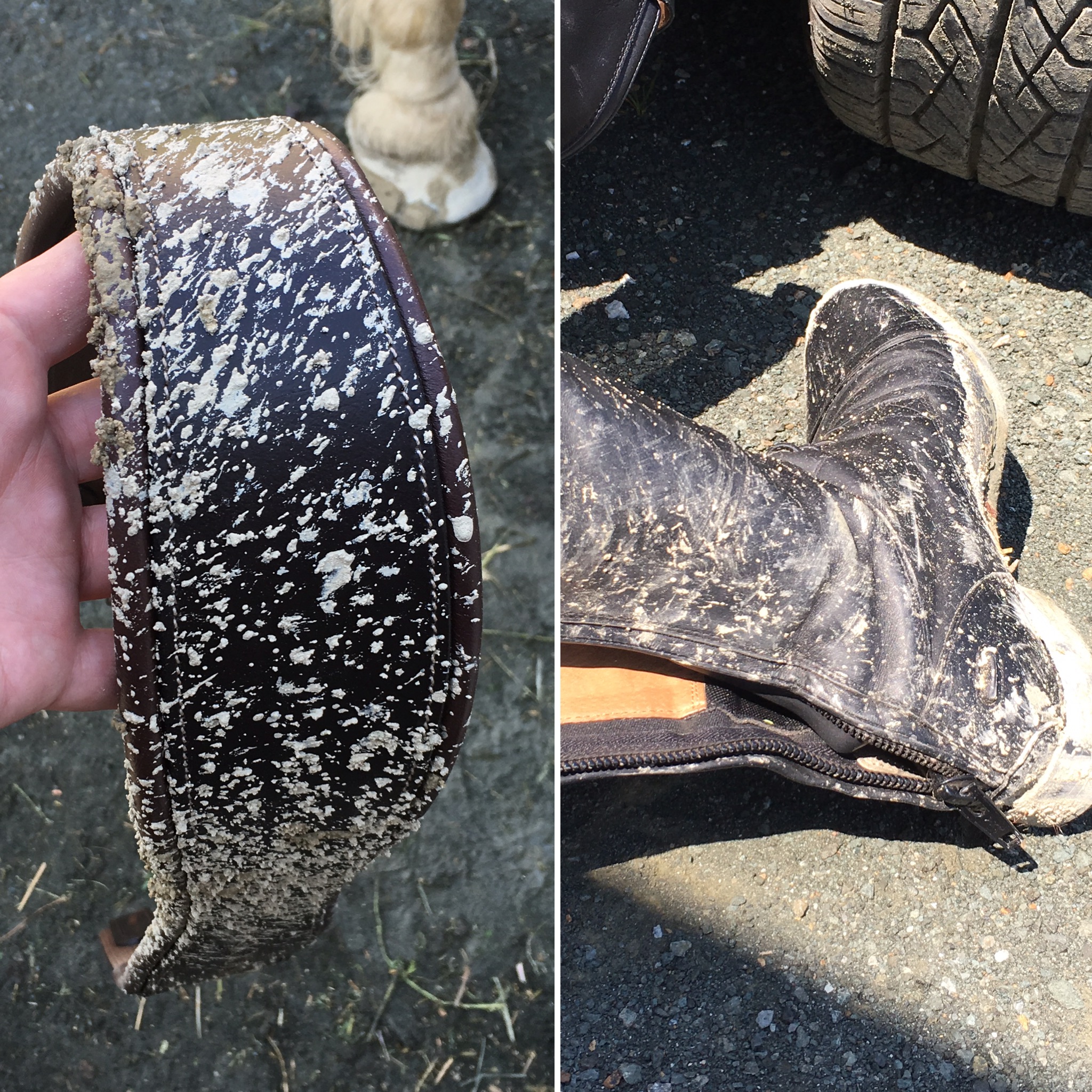 We wandered over to the hunter ring around 4 to find them no were near ready to go. They were still doing the 2’9″ division with the 3′ division to come. I had somehow forgotten the camera, but had plenty of time to go back for it. And then some more time. And more.

I was really excited about the hunter derby because I’ve seen lots of cool pictures of them and I like how they have different types of jumps like hay bales, brushes, and logs. I also like the optional fences and different heights. Sadly, they didn’t have any real derby jumps. They actually used almost all of the same hunter jumps from the rest of the day, but they did have a jump out of the arena into the arena next door with 2 jumps in there. The jump in and out was a brick wall and it was optional. 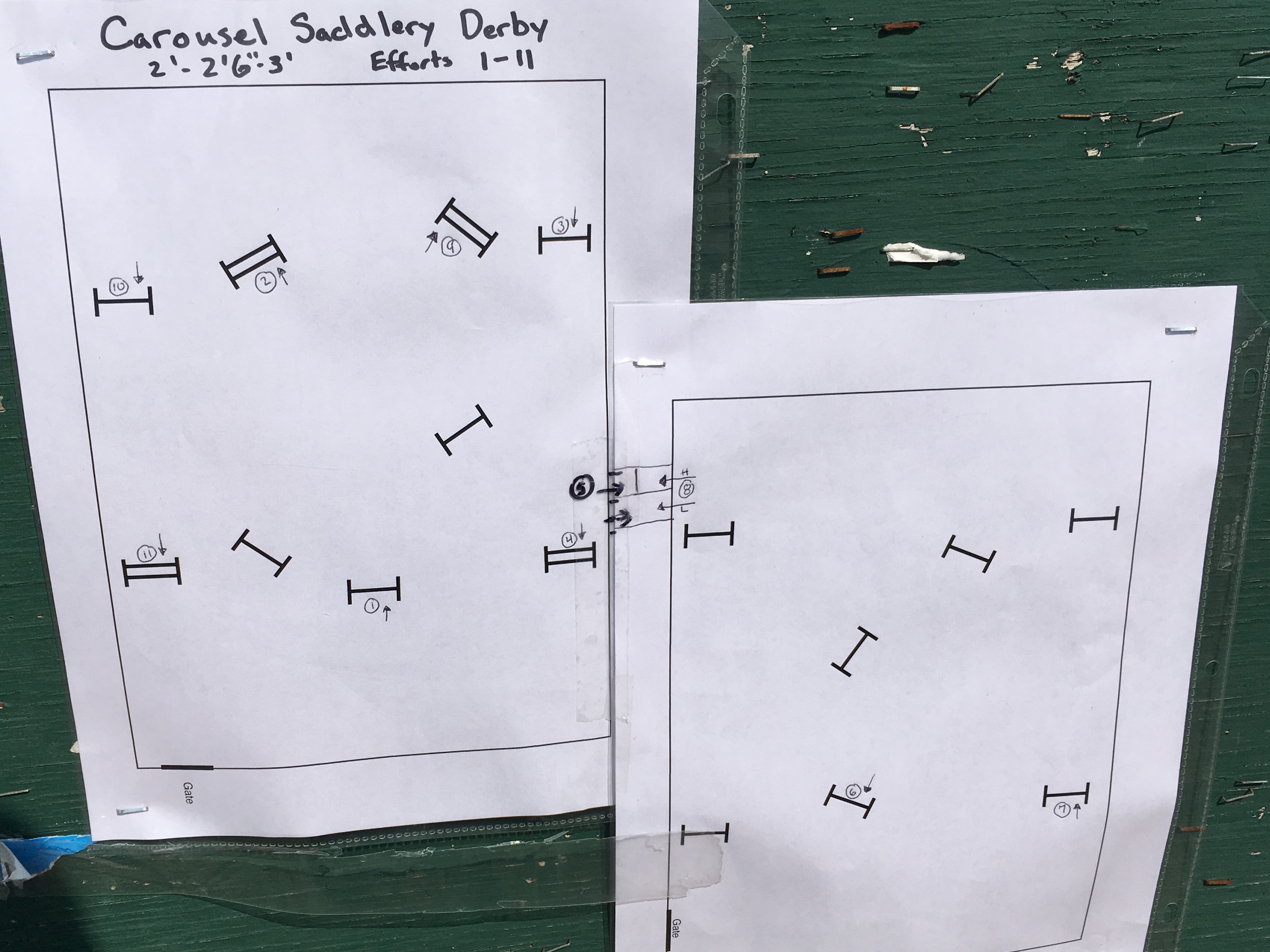 After the 3′ division finished, they opened the arena for a course walk. The above picture of the course isn’t entirely accurate though. The actual jump 5 and 8 was on a slight slant. If you jumped the jump straight you’d be lined up badly for the next jump, but the jump was scary so angling it would be difficult. We decided on taking the jump as straight as possible, but I warned my husband to skip it if he felt like it wasn’t going to happen a few strides out.

The hunter derby was a bit odd in that they were offering a 2′, 2’6′ and 3′ course but all judged together. When we came over to sign in, the course looked a little high for 2′ so I told my husband maybe he should just do that. After walking the course, we learned that it was actually set for 2’6″ because they were starting high and no one had signed up for 3′. The jumps were like 2’3″, so we signed up for that height.

Once again, absolutely no one was willing to go first. Even though people had actually signed up on an order-to-go sheet and someone had signed up to go first, the show refused to force people to go and my husband caved and offered to go first. 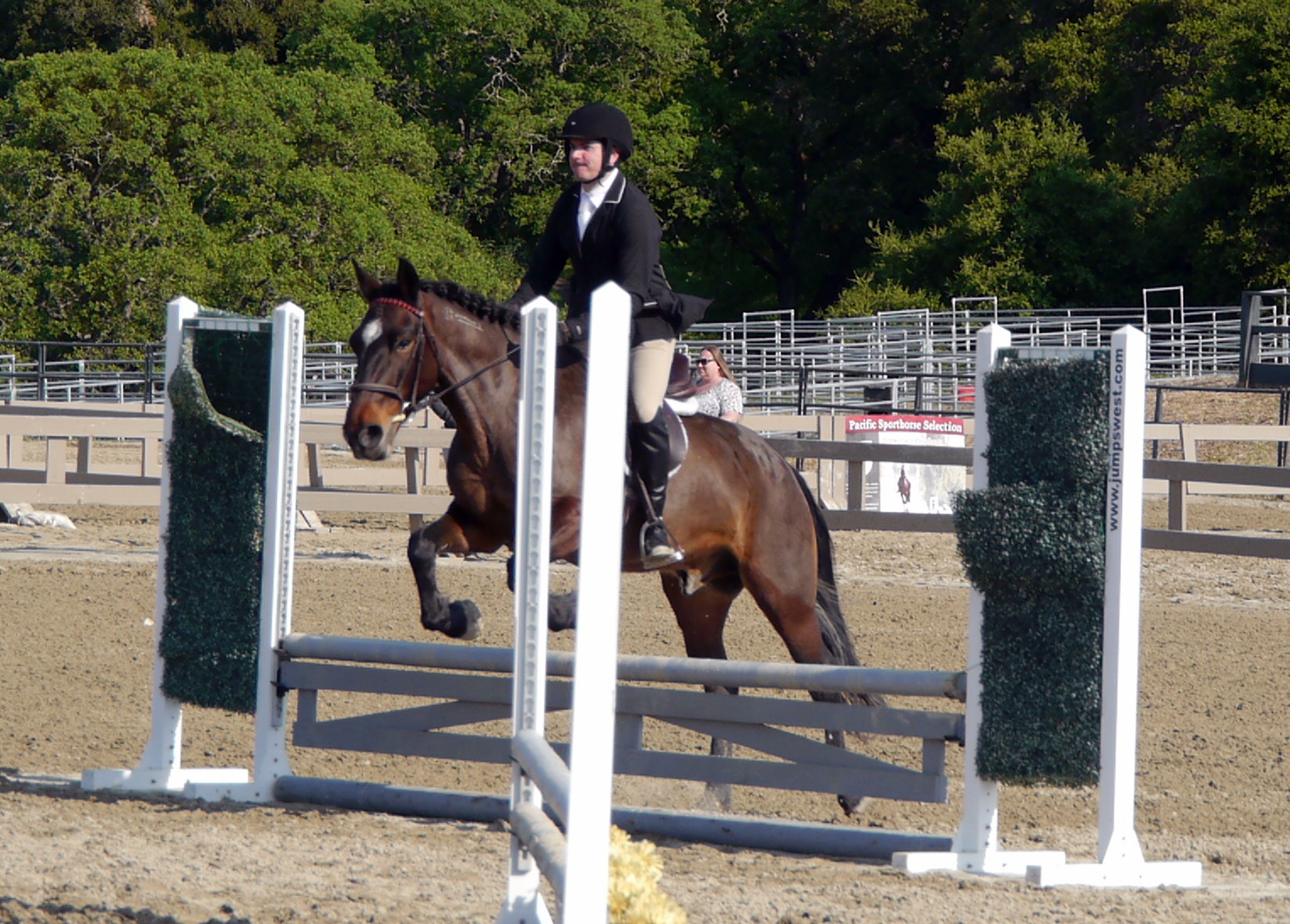 At this point in the day, Eugene was a bit tired and he sort of loped over the first jump. My husband did not get after him enough and he took down a rail on the second jump. Then he got after him and Eugene picked his feet up for the the rest of the course. 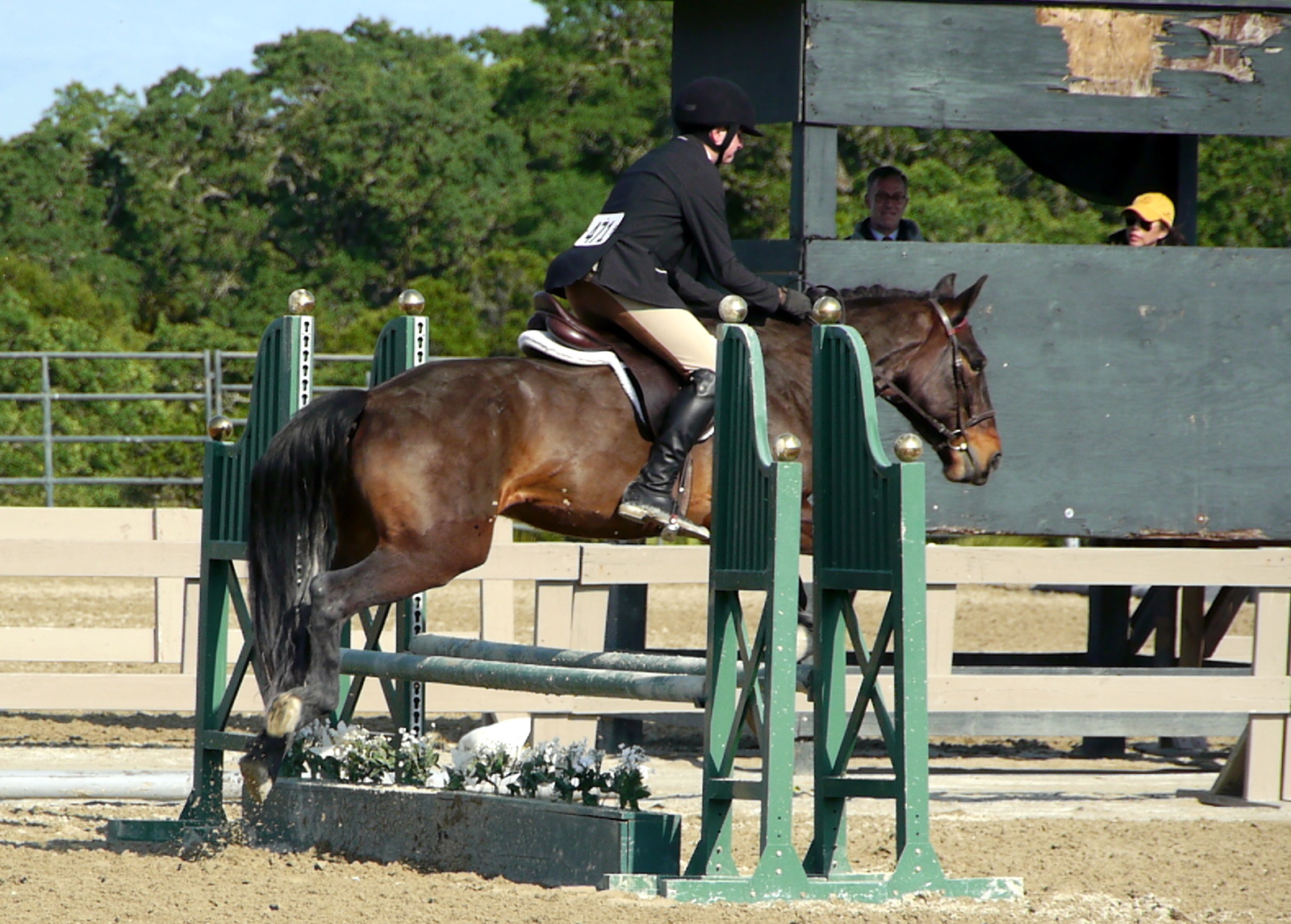 After 4, there was a turn around to 5, which was the jump out of the arena. As they approached Eugene threw on the brakes and skittered to an almost stop. I really thought he was going to refuse, but popped over it from a near stand still and actually managed to not knock it over. You can’t see from this angle, but the jump is actually 2 brick walls stacked back to back and something about the jump was terrifying. The plan was not to be jumping all the way over to the left like this, it’s just where they ended up after nearly stopping. 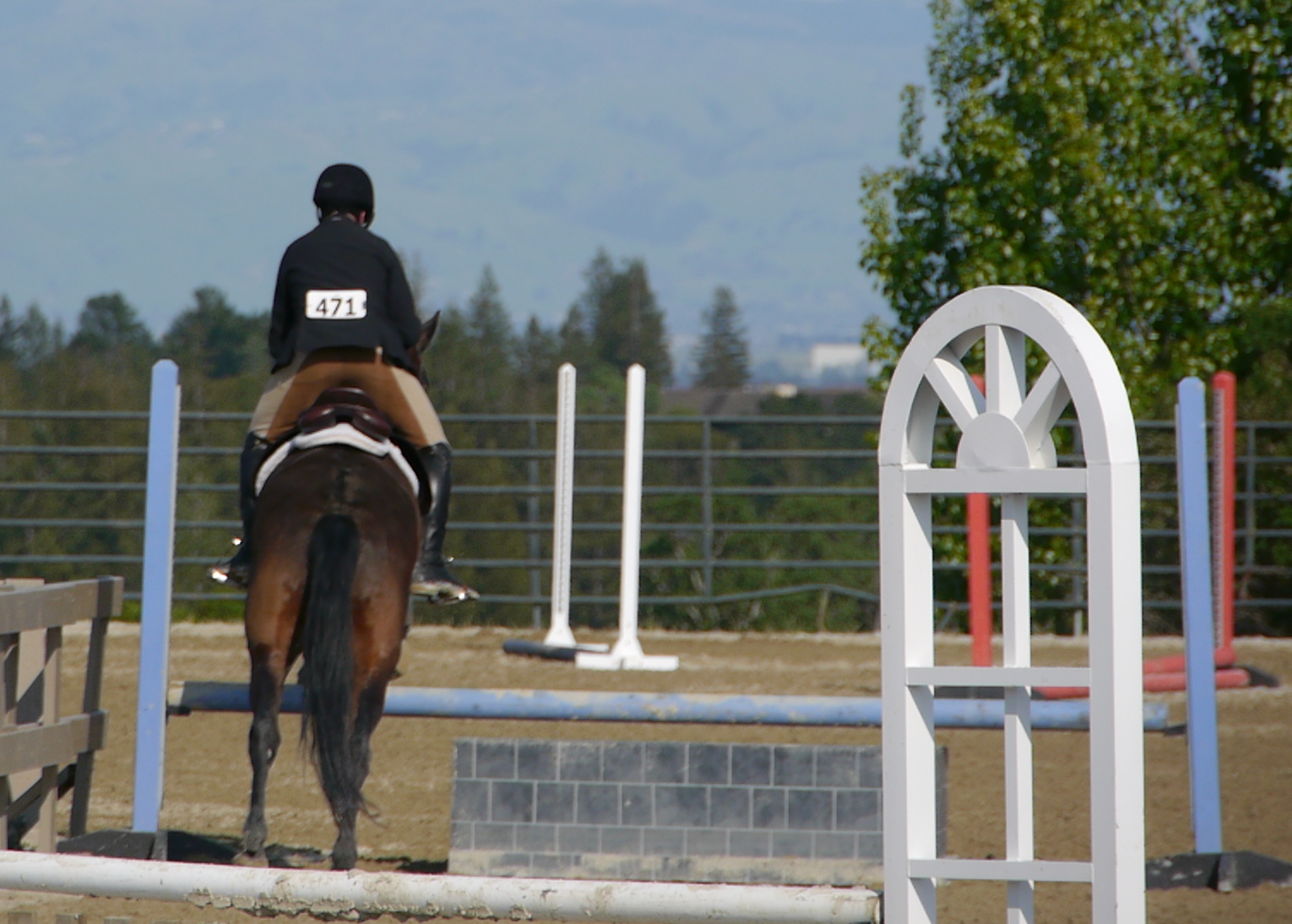 Jumps 6 and 7 were in the other arena so I don’t have clear shots of them, but they were just regular verticals. 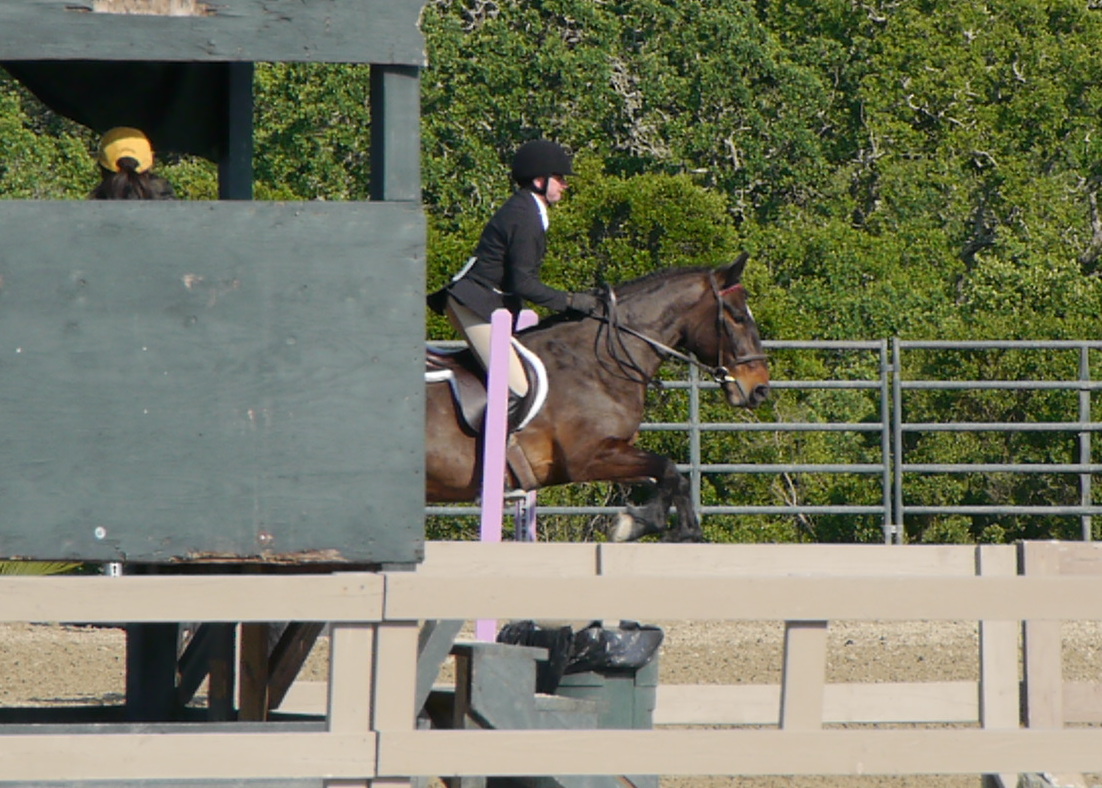 Coming back in to the main arena, I thought my husband might skip the optional fence, but he dug in and had a skittery near refusal once again. 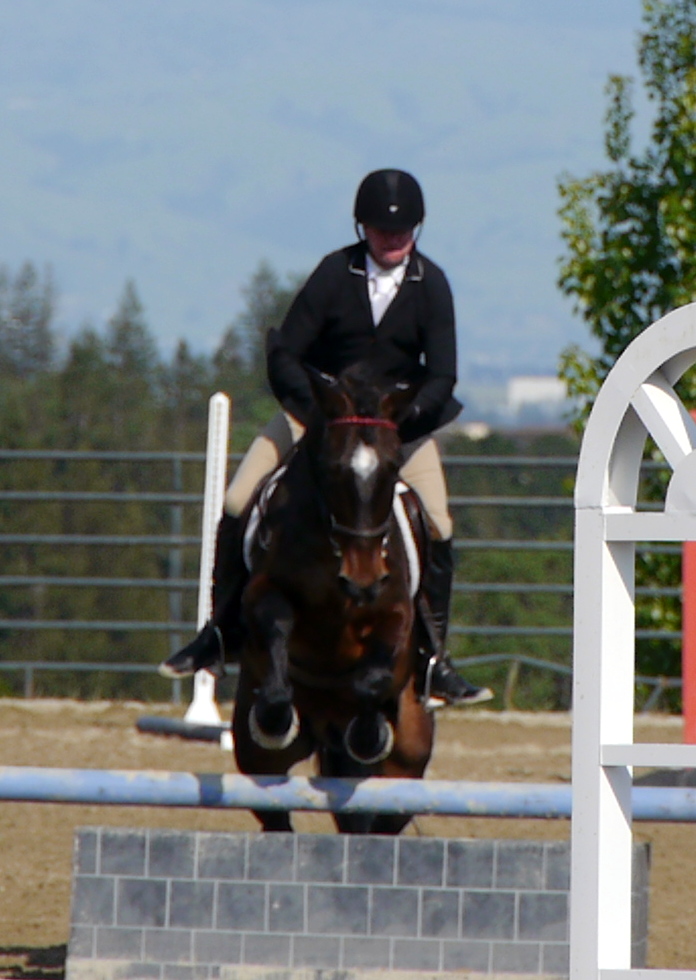 Because of the skittering at 8, their approach to 9 was a little weird, but Eugene cleared it and came in to the final line where Eugene proceeded to spook at the judge’s booth and spectator stands along that side of the arena. He spooked along this line the last time we did a class here, but he hadn’t been in this arena at all today so he was at a disadvantage to the other horses doing the class who had been. 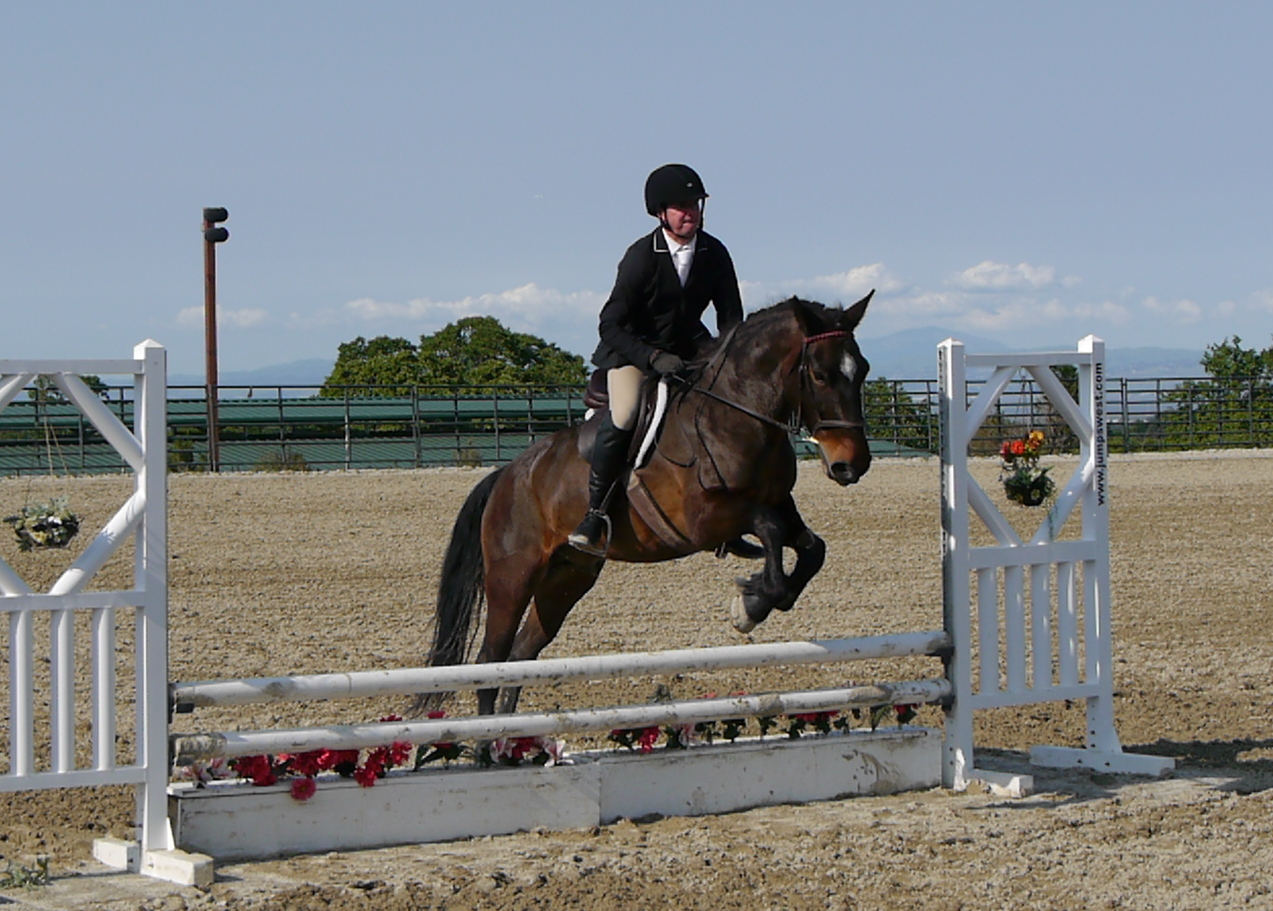 You can even see him eyeing me in the picture above. Jump 11 went well though and they circled and left the arena. His score was a 64 +4 for the optionals for a total of 68. Not great for a derby, but pretty good for Eugene. 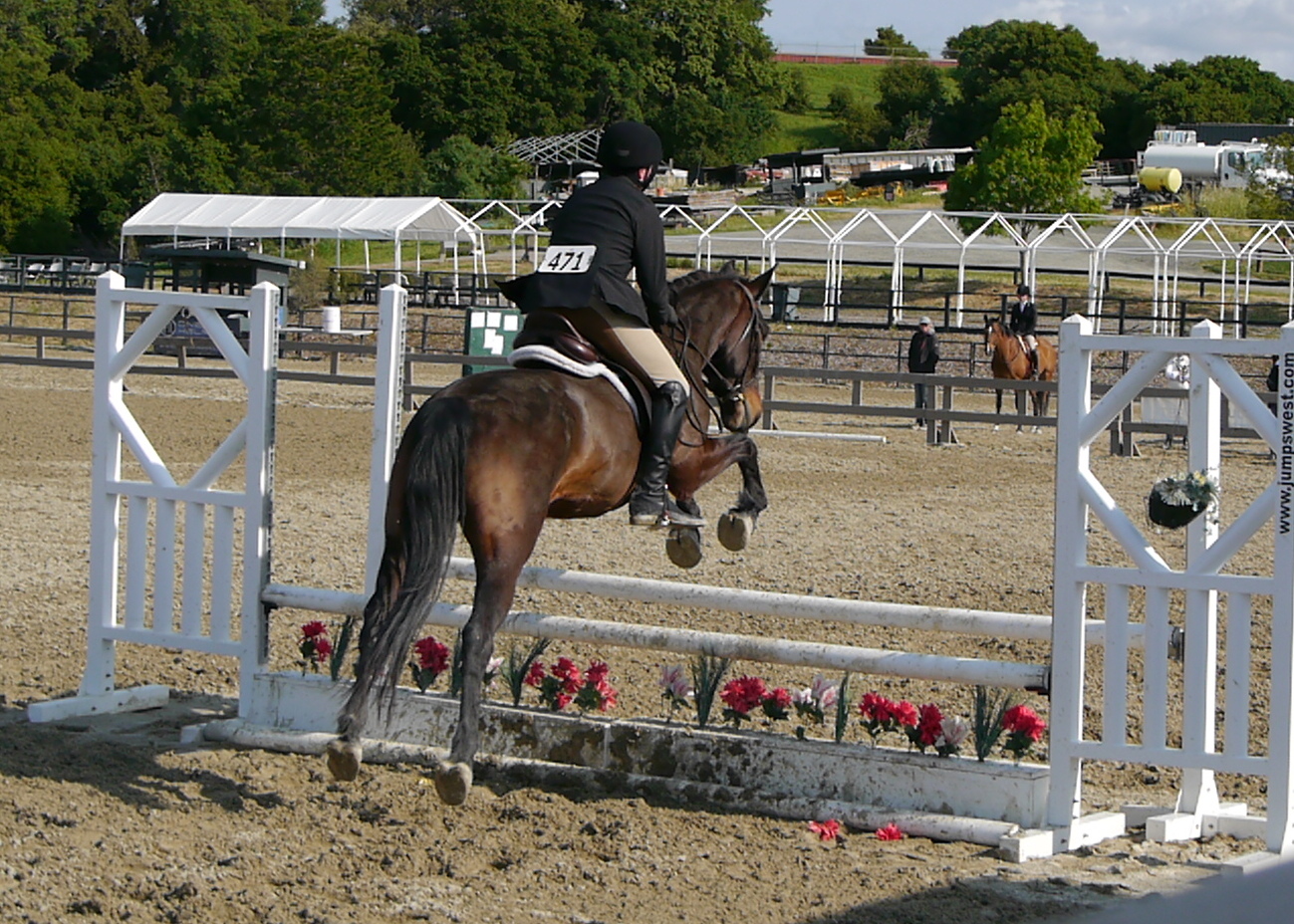 We were both really happy with Eugene. And then we watched the next 3 competitors at the 2’6″ height go and everyone had a refusal at the optional jump. One horse refused about 4 strides out and then proceeded to back up/hop sideways before the rider finally circled and got him over. I think 2 of the horses refused both ways. One skipped the optional going out and then had a refusal coming back in. All of their scores were in the 30s. The little Mustang was winning!

And then they lowered the course for the 2′ jumpers and removed the optional fence. No, seriously. They took out the brick walls and put in a little box. I knew the class was being judged together for the different heights but I didn’t realize there would be different jumps for the different heights. Especially given that the 2′ jumpers didn’t have to face the scary jump. I also didn’t realize that there wouldn’t be any additional points given for the advanced height. I ended up sitting near the woman who runs the show while we were watching the 2′ division go and she said they did it that way because the 2’6″ riders should be better riders than the 2′ riders so it should even out. Um, I don’t think that’s how it works. Especially not if you remove the scary jump. 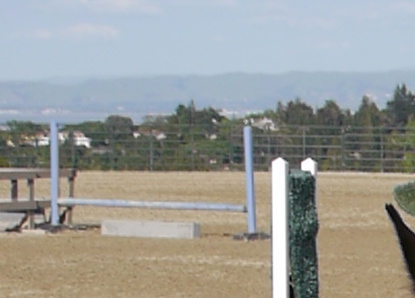 Anyway, we proceeded to watch a bunch of people go in and cruise around the 2′ course getting scores in the 70s and 80s. There were a few poles down and random errors at other jumps, but my husband ended up getting knocked down to 5th place. As far as I’m concerned though, he won that derby. I just don’t think the different heights should have been handled like that. And I wouldn’t be complaining so much about a schooling show if there hadn’t been a prize of new Ariat tall boots for the winner of the class.

Oh well, the real accomplishment was how well Eugene did. And he was very good. He went in there and did his job and tried hard even when he was scared. The judge actually came up to us after the class and complimented us on Eugene and said he liked how brave and easy-going he seemed.

They did get to go in for a ribbon ceremony and get fancy neck ribbons. I’ve never won a neck-ribbon and neither has my husband so that was really exciting. They did a victory trot around the arena and then posed for pictures.

Look at that ribbon. What a good Mustang. #horsesofinstagram #blmmustang #horseshow #hunterderby

All in all, it was a great show and a good learning experience for Eugene. I think he’s getting better and better with all the shows we’re taking him to. Hopefully he’ll be this good when we get to our first event of the season.