Since we started showing, we’ve been going to the LAHHA schooling show every year. In the past, it was a great opportunity to practice showing in a fun, low-key environment. All the funds from the show go to the town horseman’s association and they use the funds to support trails around town. I’m all for that, so even though we’ve graduated past the highest jumping level they offer, we decided to go anyway. The afternoon offers a bunch of fun games classes and we’re always up for playing games with our horses. We even convinced some of our fellow barn mates to join us for the afternoon’s games.

We still got there early enough for the jumping classes because they were offering a gamblers stakes class and I thought that’d be fine even if it was only at 2’3″. When we arrived and went to register we learned that no one else had entered the 2’3″ division. Since we know the woman running the show, we asked if she would raise the jumps up to 2’6″ for us and decided to enter the whole division.

Hunters was first and it was a nice, easy hunter course. 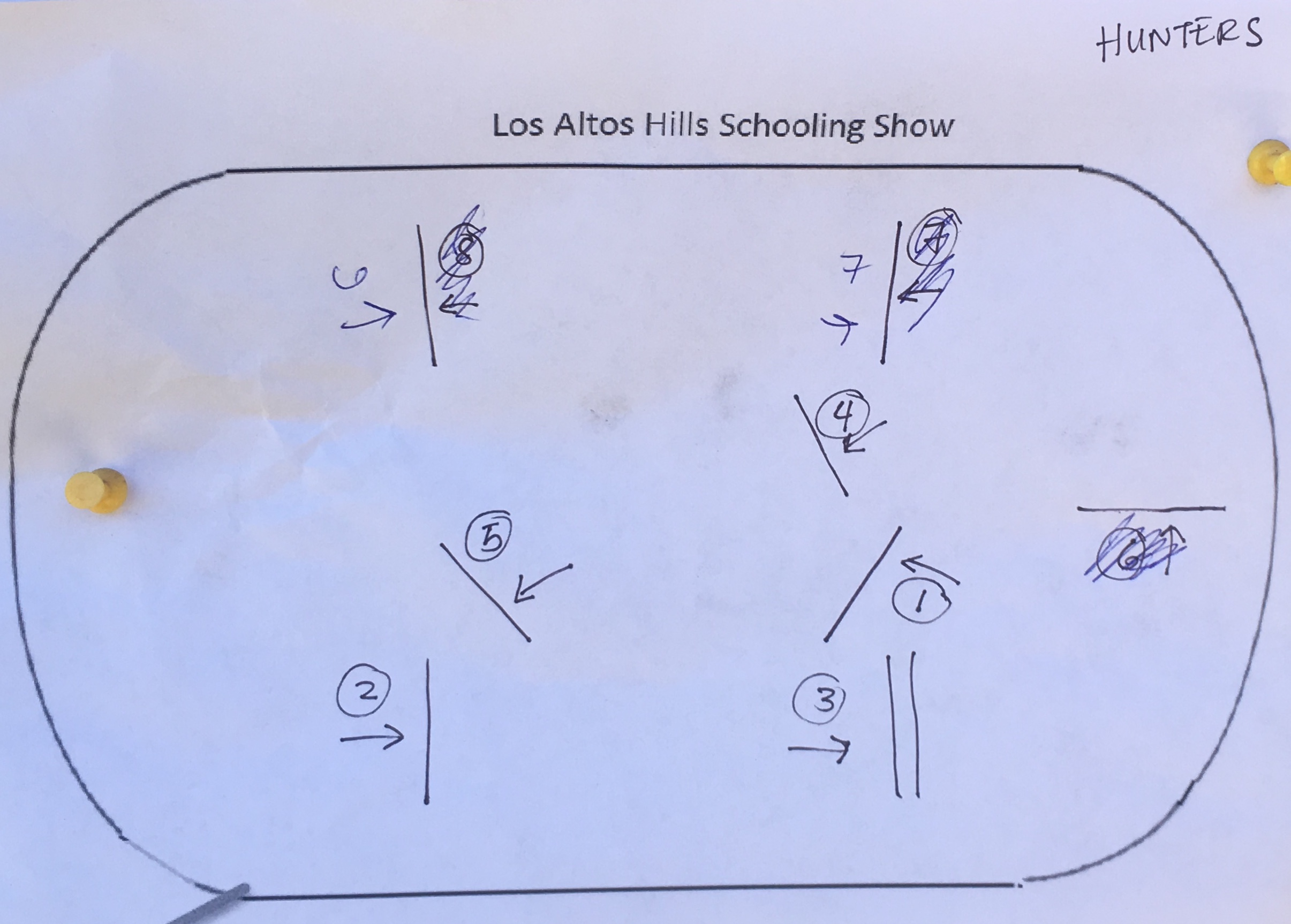 Of course, Levi had to look at every jump since he’d never seen them before and we predictably lost to my husband. 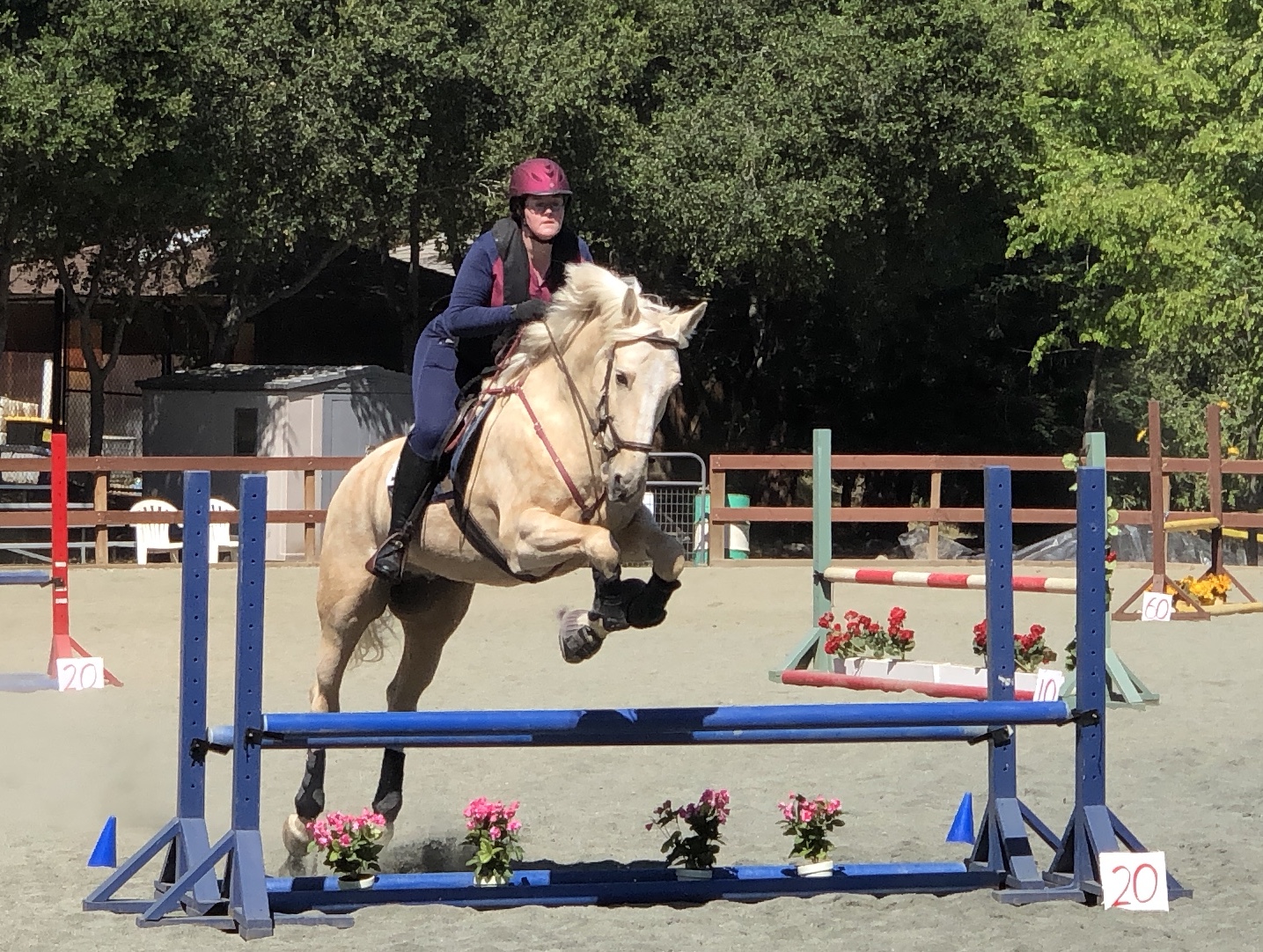 It’s a shame that Eq wasn’t first because I was definitely going to lose that one anyway. If we could have combined him and I looking stupid into one round, we might have done better in the hunters. My husband promptly attached his first place ribbon to Eugene’s bridle and spent the rest of the show sporting it. 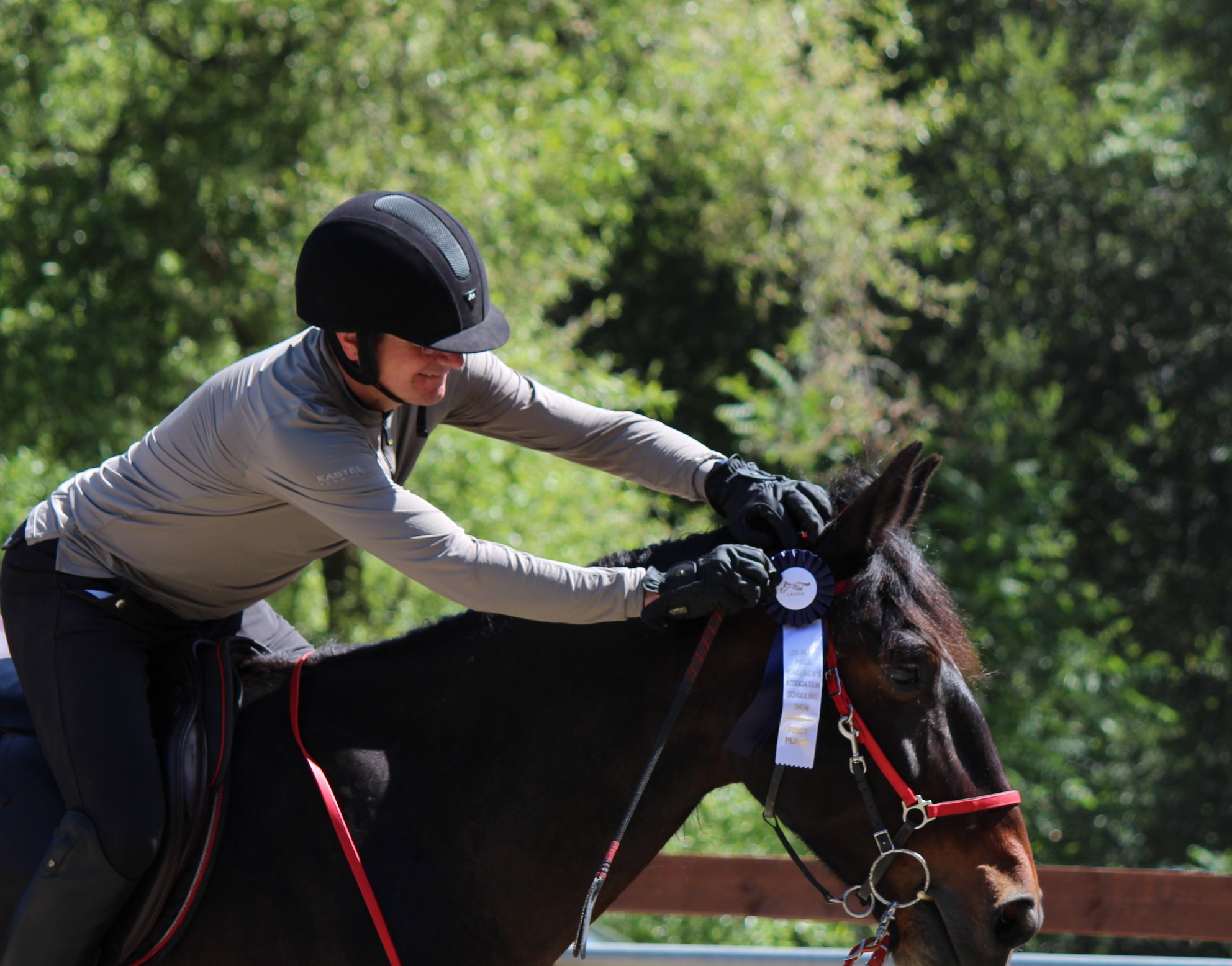 The Eq class was next and there were some weird and tricky lines in that course: 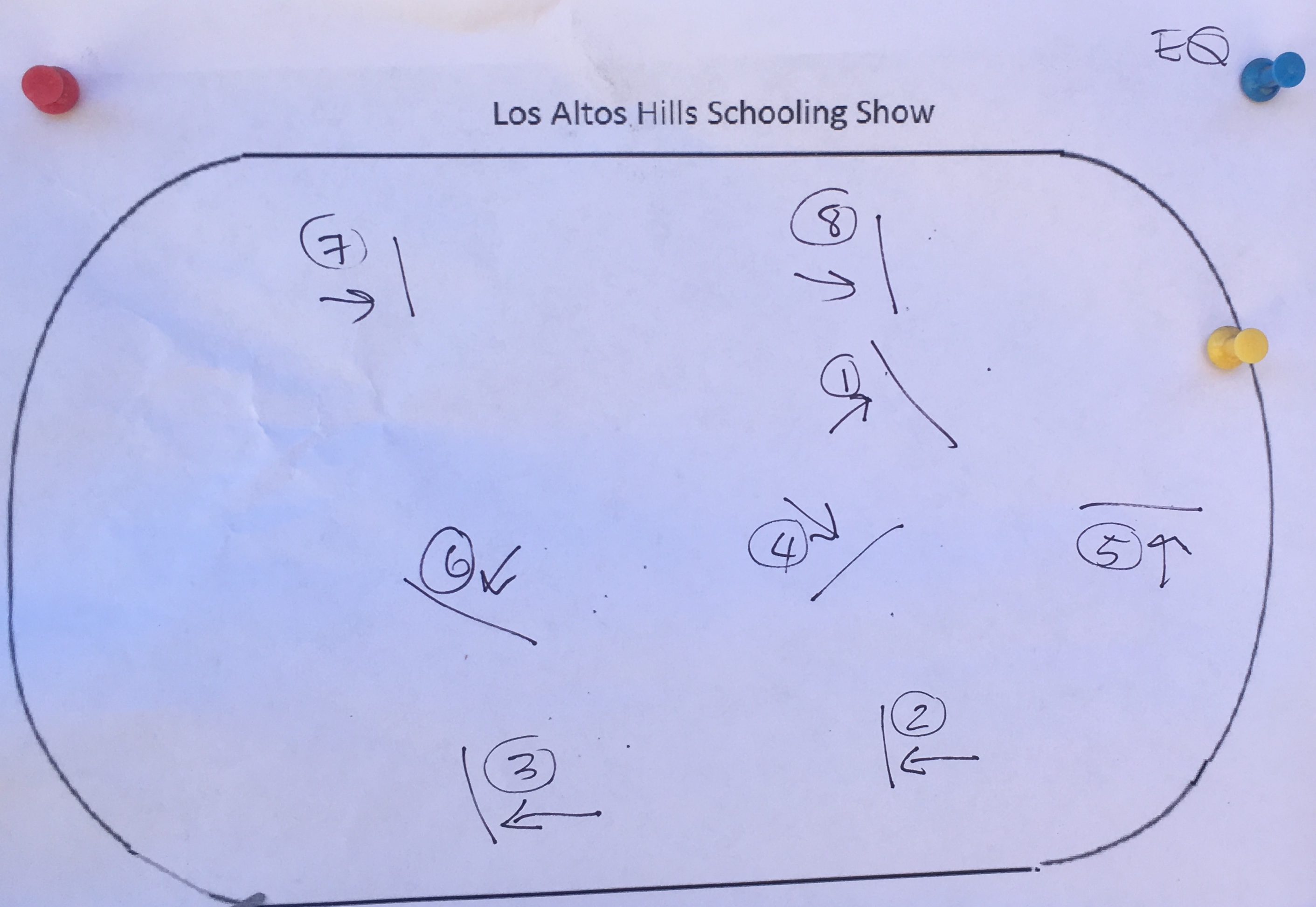 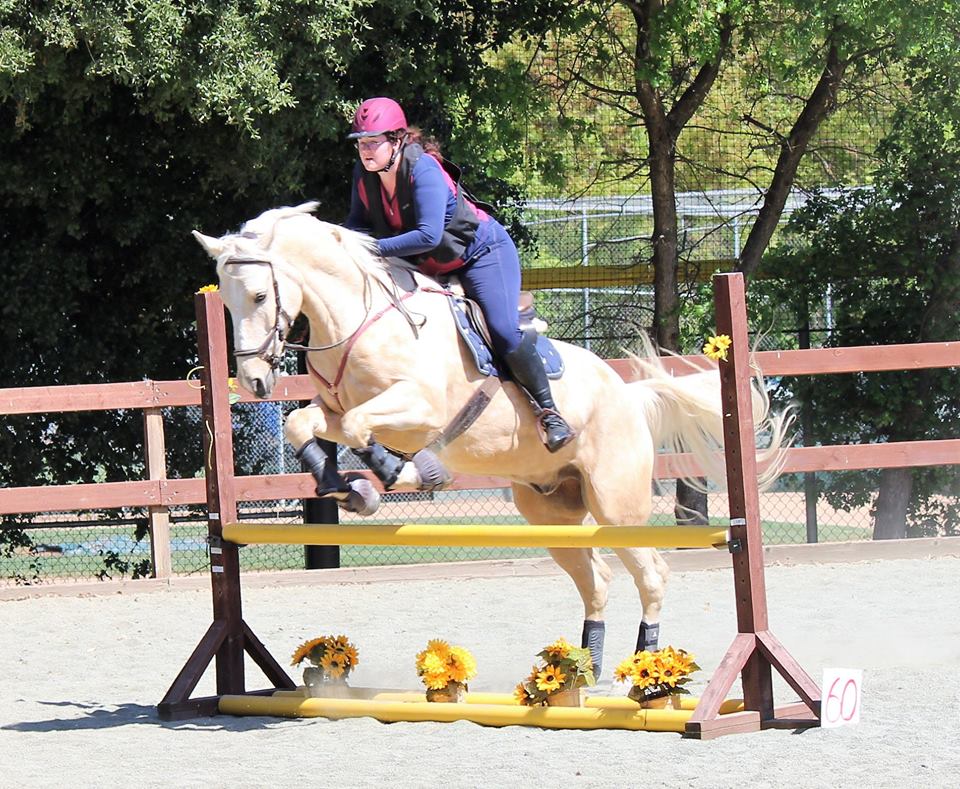 Since I have terrible Eq, I got another second place. 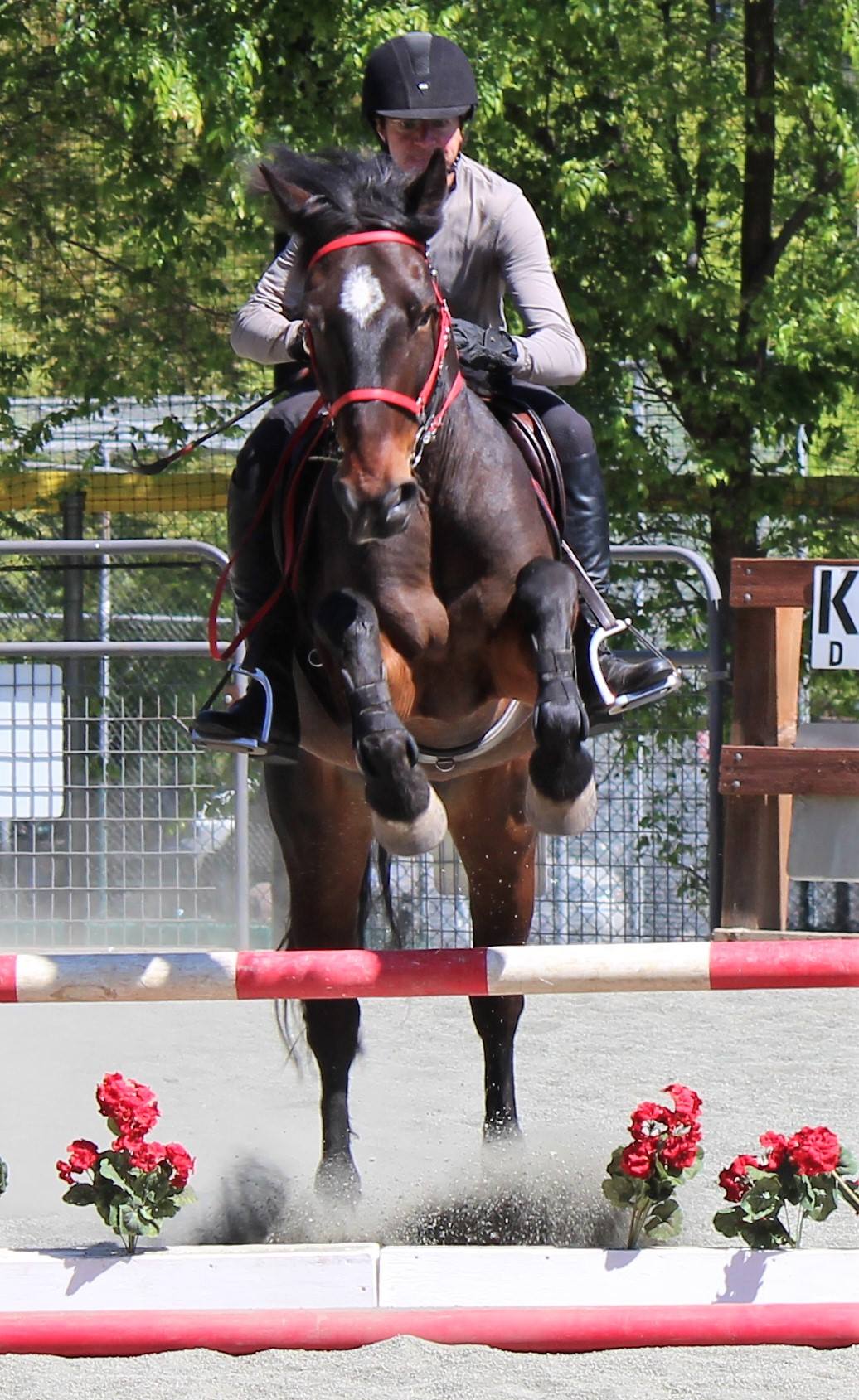 The jumper course was even more tricky. The same turn from the Eq course was complicated by adding a quick turn to another jump (#3). Then you had to weirdly contort yourself to get to #5 and then somehow make a 180 and get over #6. 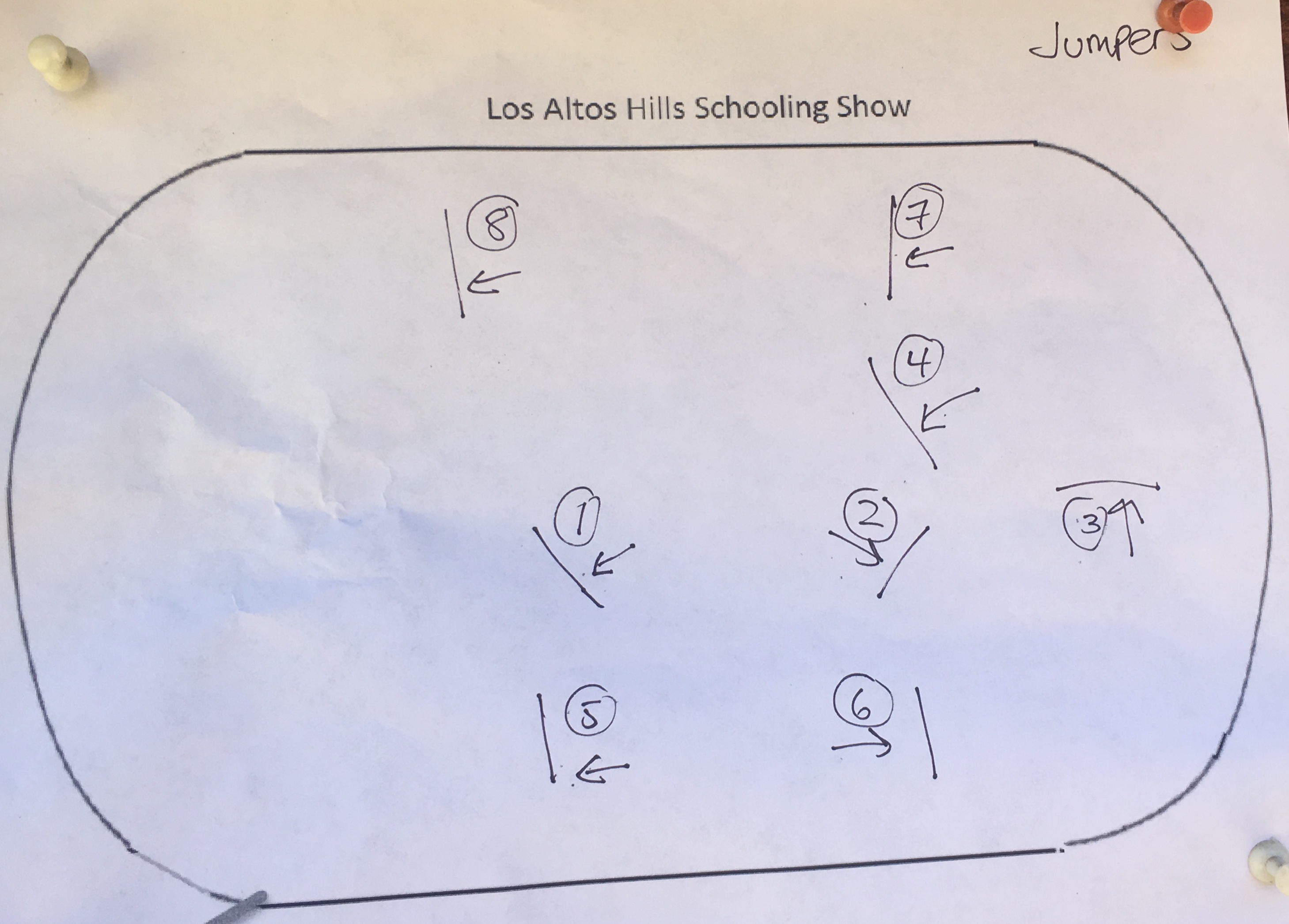 My husband went first and had a rail, which meant I just needed to go clear to win. 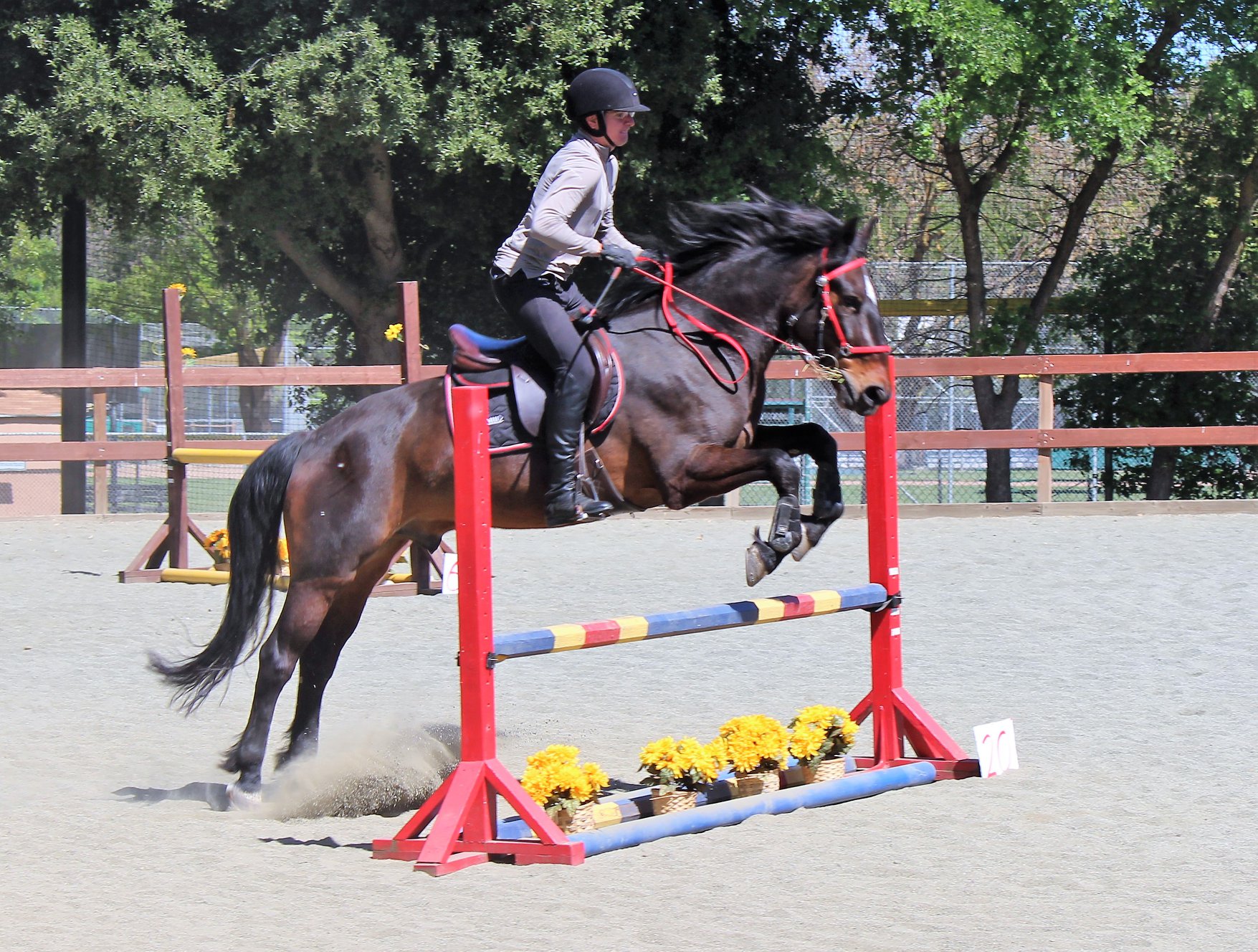 Since I didn’t have to worry about time, I slowed down and focused on getting good lines and going clean. We trotted a few of the weird turns to get lined up. We were clear all the way… until the very last jump. It wasn’t even on a weird turn, it was a nice straight line, but he knocked it. 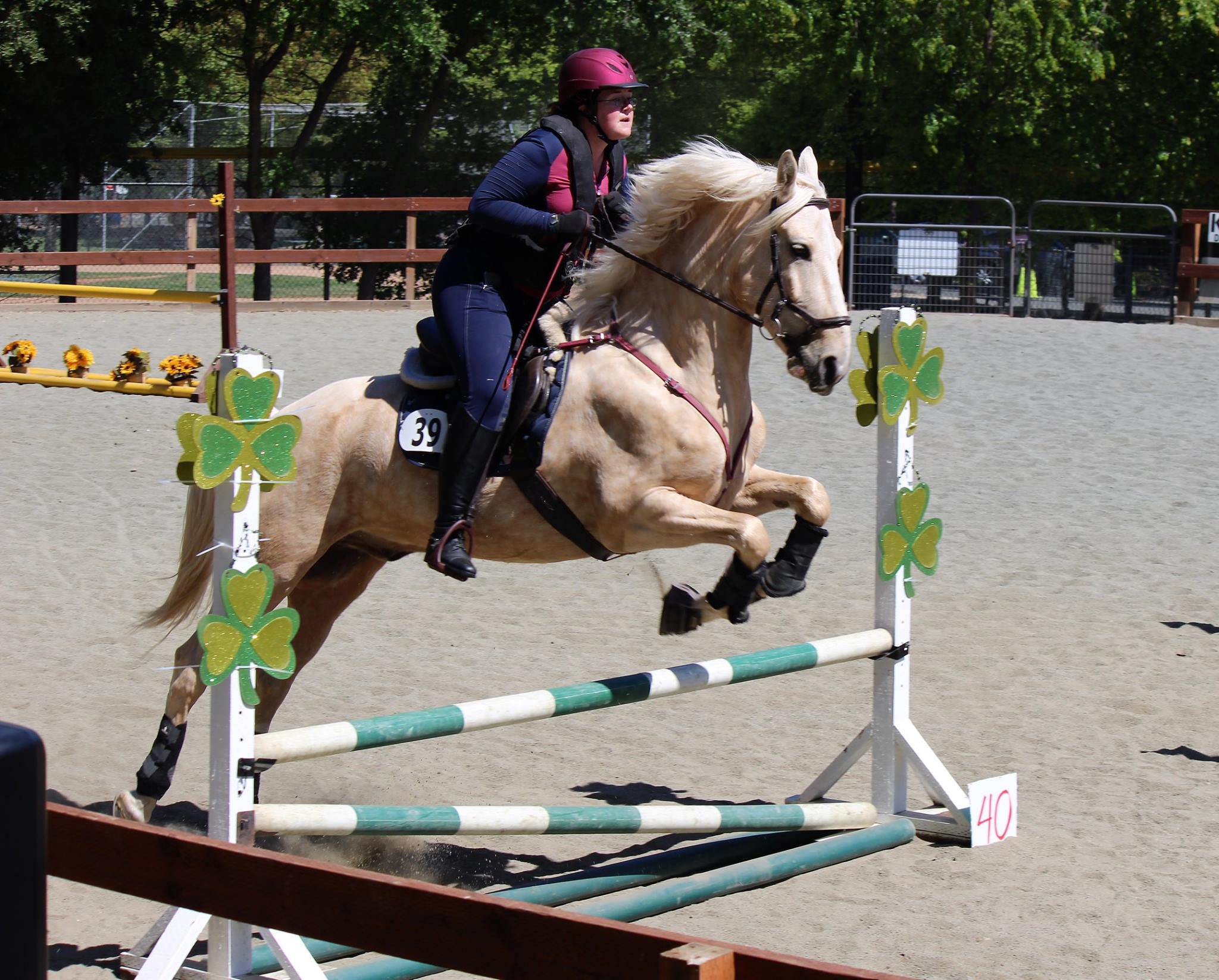 Since there were only the two of us, they had us do the jump off to break the tie. The jump off was the first 5 jumps. My husband had a rail and we were clear and finally won a class.

For the Gambler’s Stakes they raised some of the jumps and lowered some others. You can see the points on all the jumps in the pictures above. The yellow jump on the short side that was so difficult was 60 points and I had planned to just do a wide circle doing that one jump a bunch of times until they raised it to 2’9″. I was complaining that they’d ruined my plan and the judge overheard me and said that would have been her plan too! I love chill shows like this; it’s all about the fun. 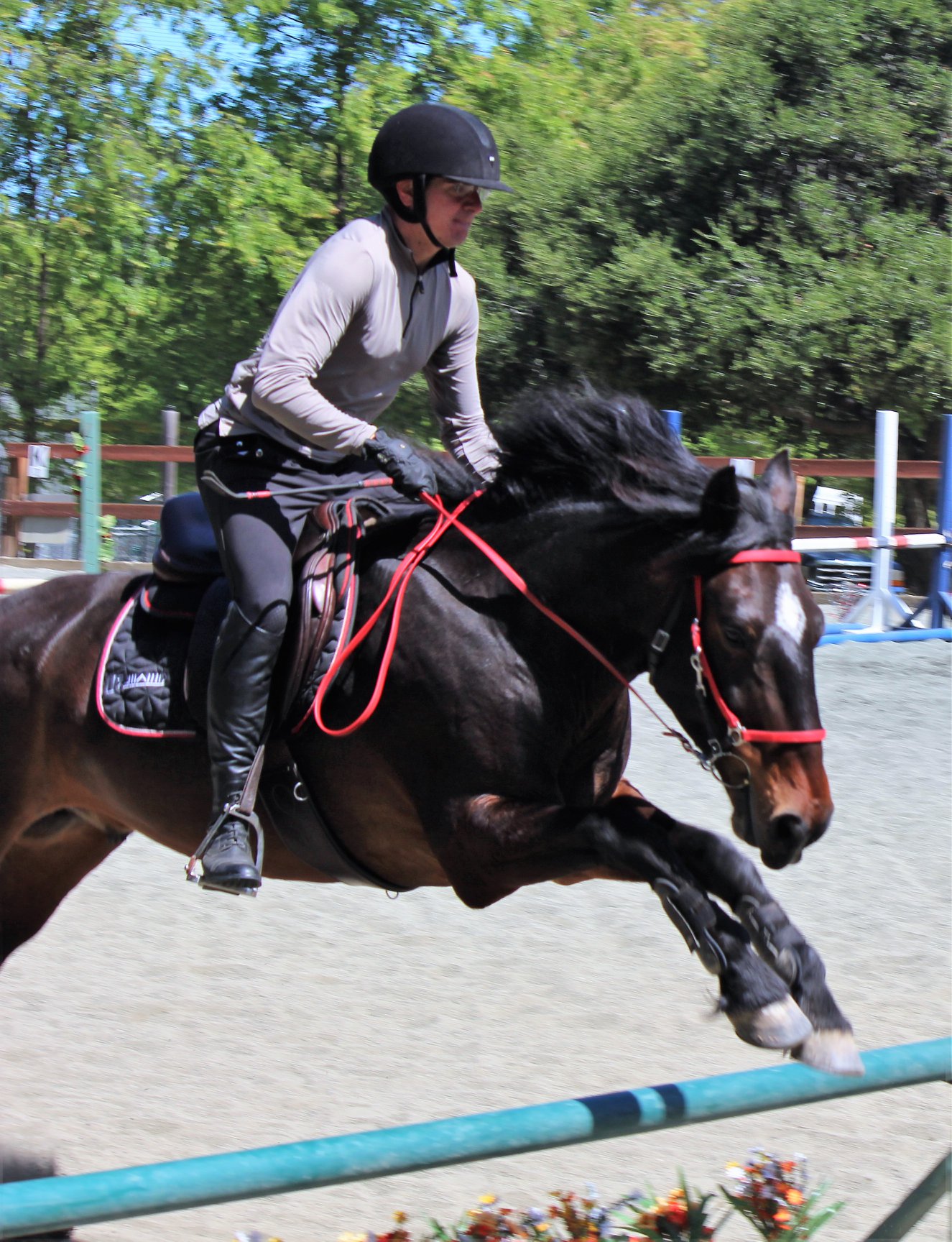 My husband went in and did laps around the 60 point jump adding in a few of the 40s for the hell of it. I figured I had no chance of winning so I’d just go in and practice a bit. We did that until we came around to the red jump, which had been lowered and he had already jumped 3 times when he decided to nope right out of there. 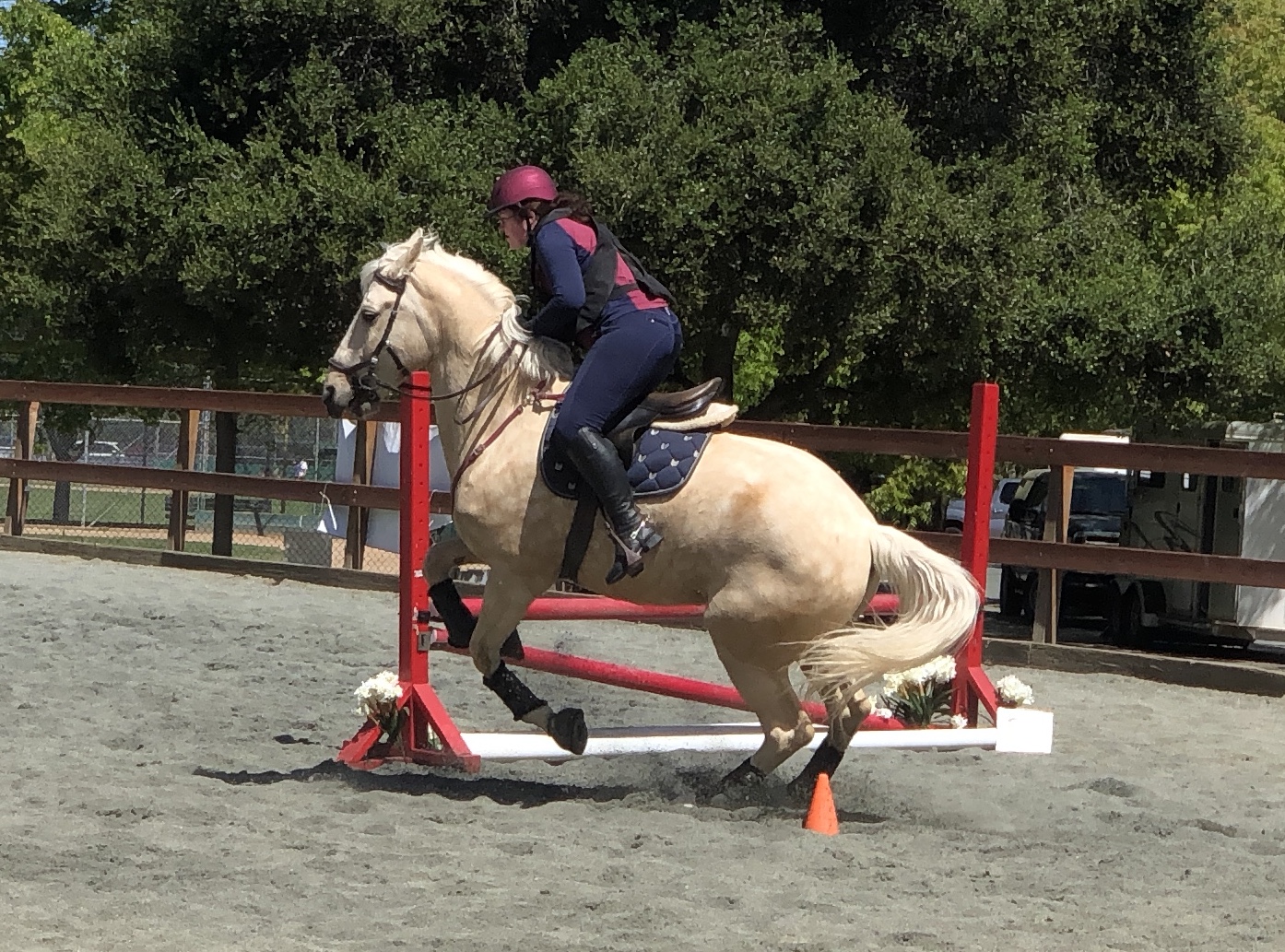 He had no excuse for that so I turned him around and just made him walk his *ss over it. 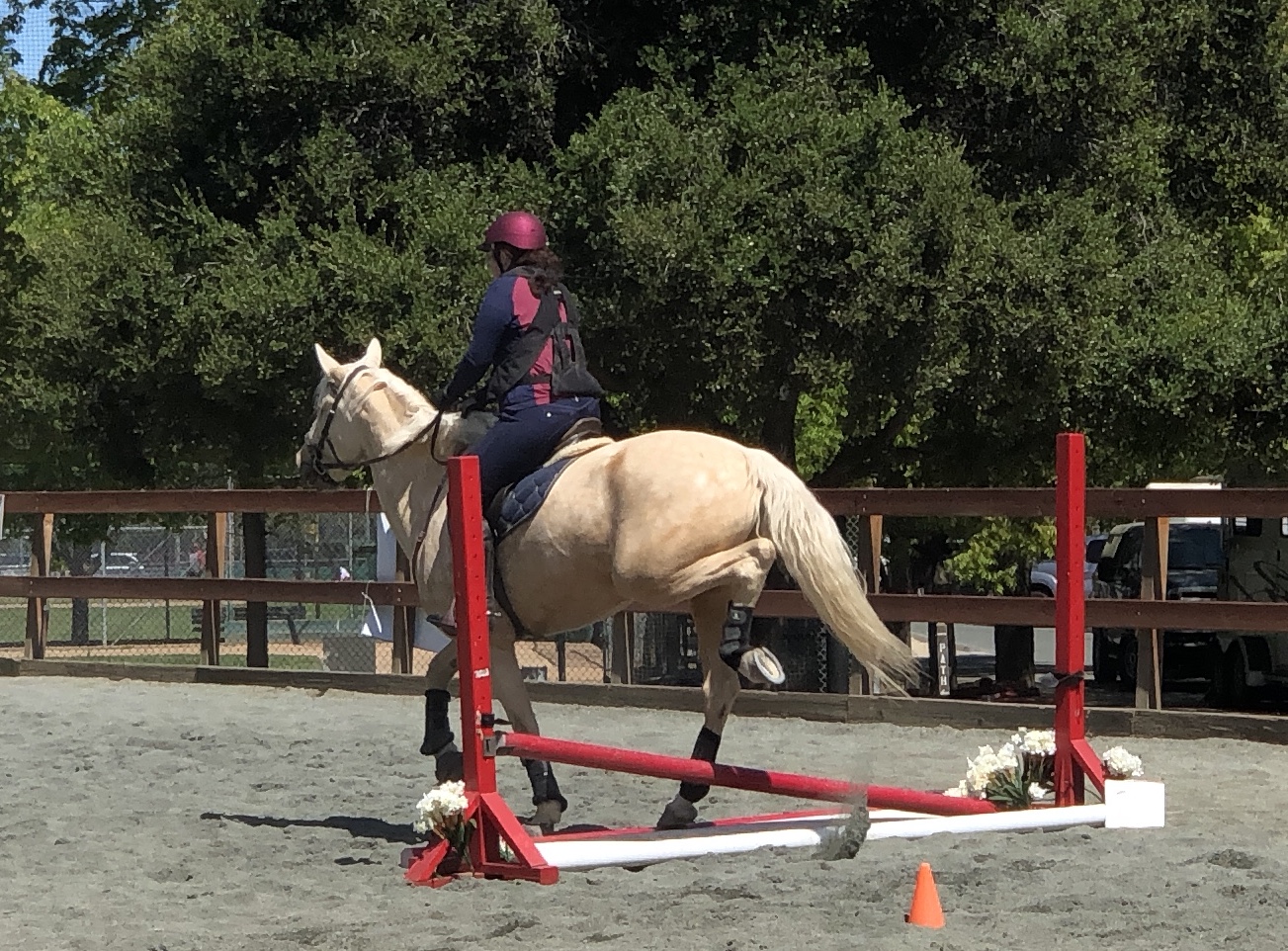 Then we carried on and jumped a bunch of other jumps without issue and even circled around and got over that same jump after it was reset by a volunteer. 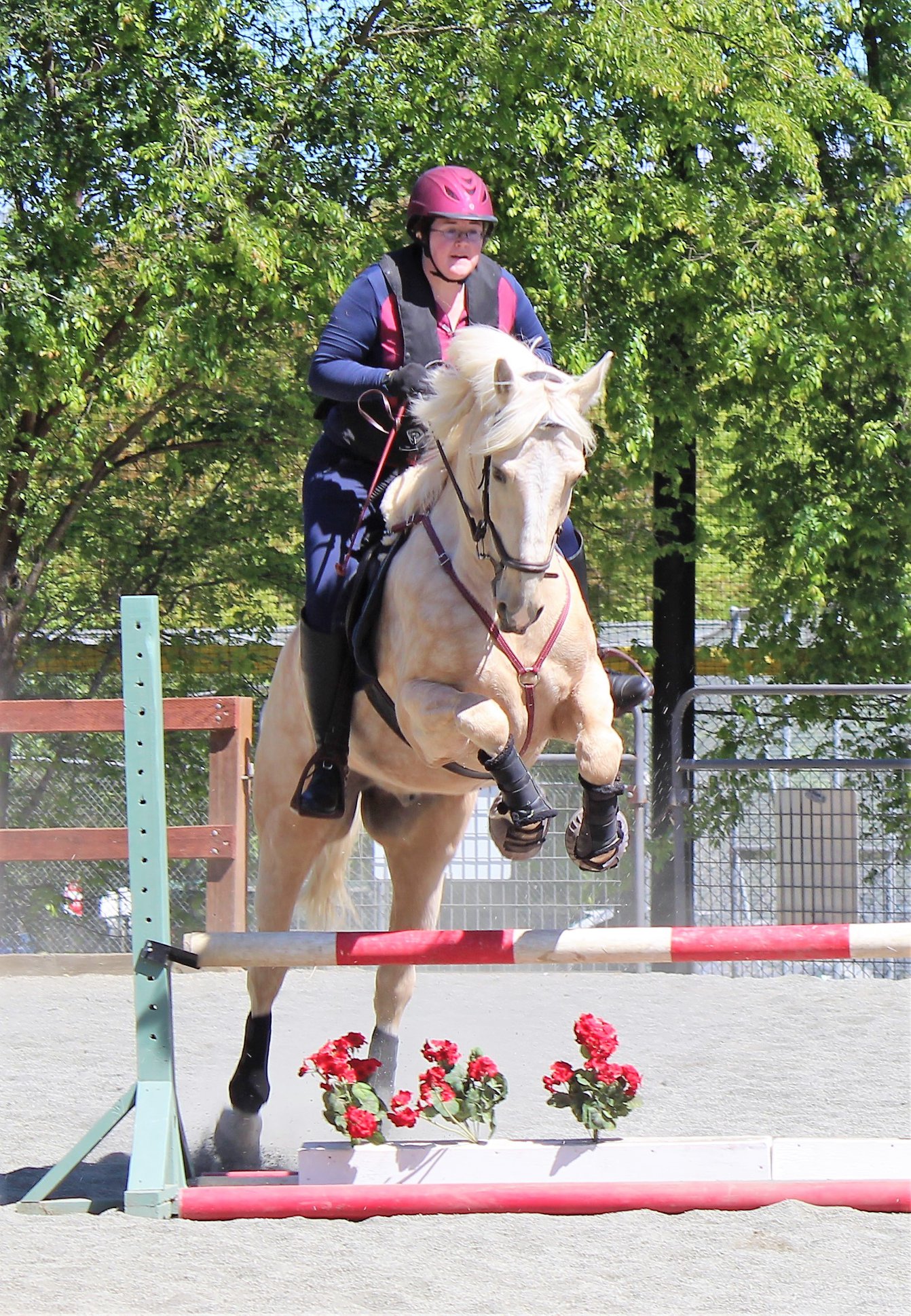 I think I ended up getting about 110 points to my husband’s 300+. He got another 1st and won the division. I still had fun though. We always enjoy ourselves at this show and the best part was yet to come: games! 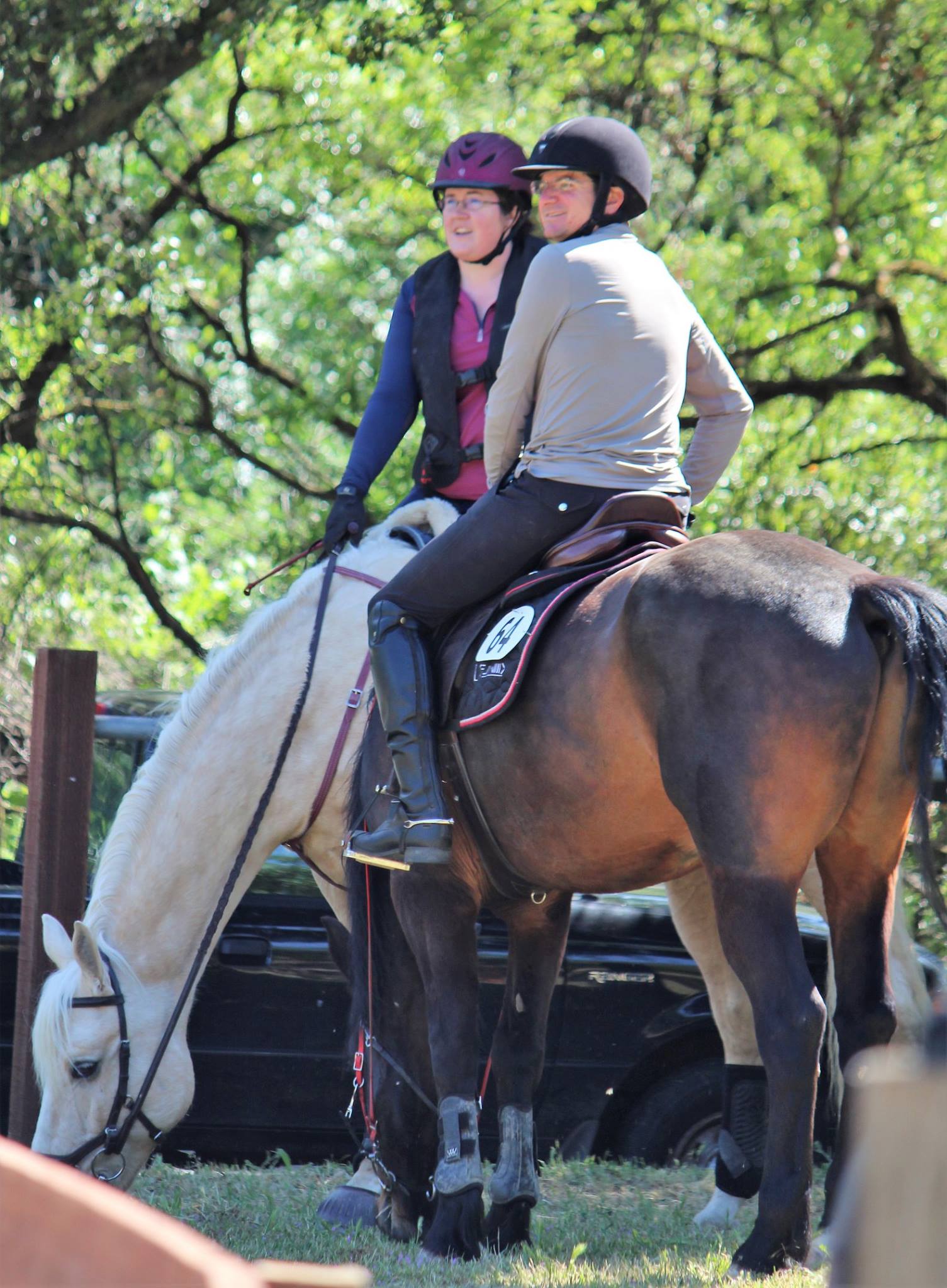