After lunch, our friends arrived. Two of the other boarders at our barn brought their green horses for exposure. We also borrowed a horse for my friend to ride. She’s ridden Nilla and Levi at this same show for the previous two years, but couldn’t use them this year. Nilla is still broken and Levi has recently decided that everything you do must mean canter and that’s not really so great for beginner riders who ride once a year. We tried out having her ride Levi a few nights before the show and he just kept trying to canter. We tried putting her on Eugene and he was so baffled that no real riding could be accomplished. He wasn’t being bad, he just didn’t know what she wanted and kept decided the safest course of action was to stop. Our barn friend offered to let us borrow Pixie and we took her up on that.

My friend did two flat classes with Pixie, who was so good one of the trainer’s there was trying to convince her owner to sell her. She’s never been to a show in her life and she just marched in to the ring and did her job. The only thing she cared about was the speaker when they went off right as she went past, but even that she just gave a dirty eye to and swung wide. She’s too lazy to spook. 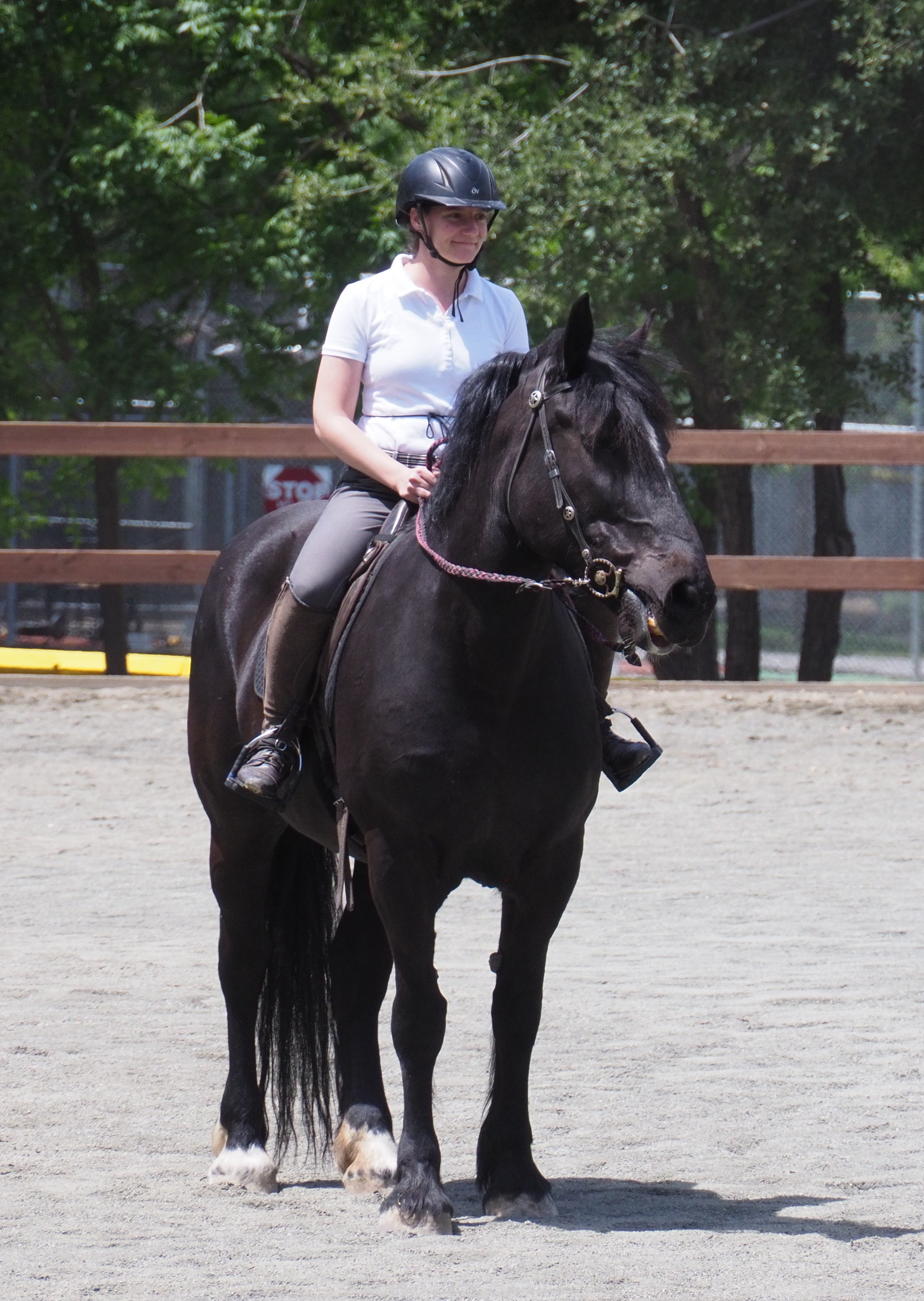 Our fellow boarders also did some flat classes with their green babies including the other barn Mustang, Devro. The show allows for any tack outside of the jumping classes so they did Maiden W/T Hunter Please and Maiden W/T Hunter Equitation in their western gear. We really love going to this show for exposure. 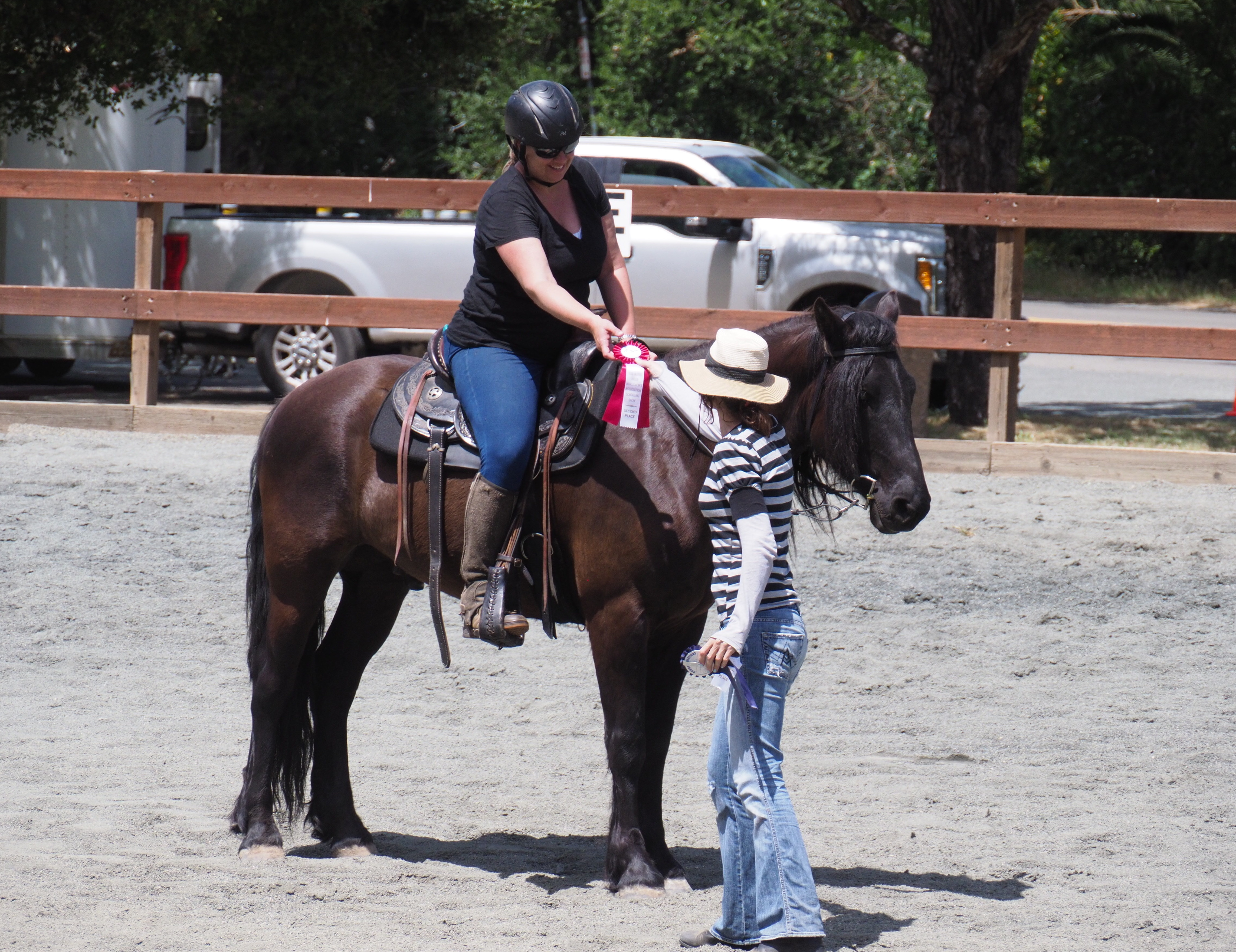 Once the flat classes were done, it was time for the games to begin. 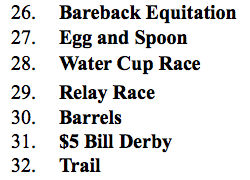 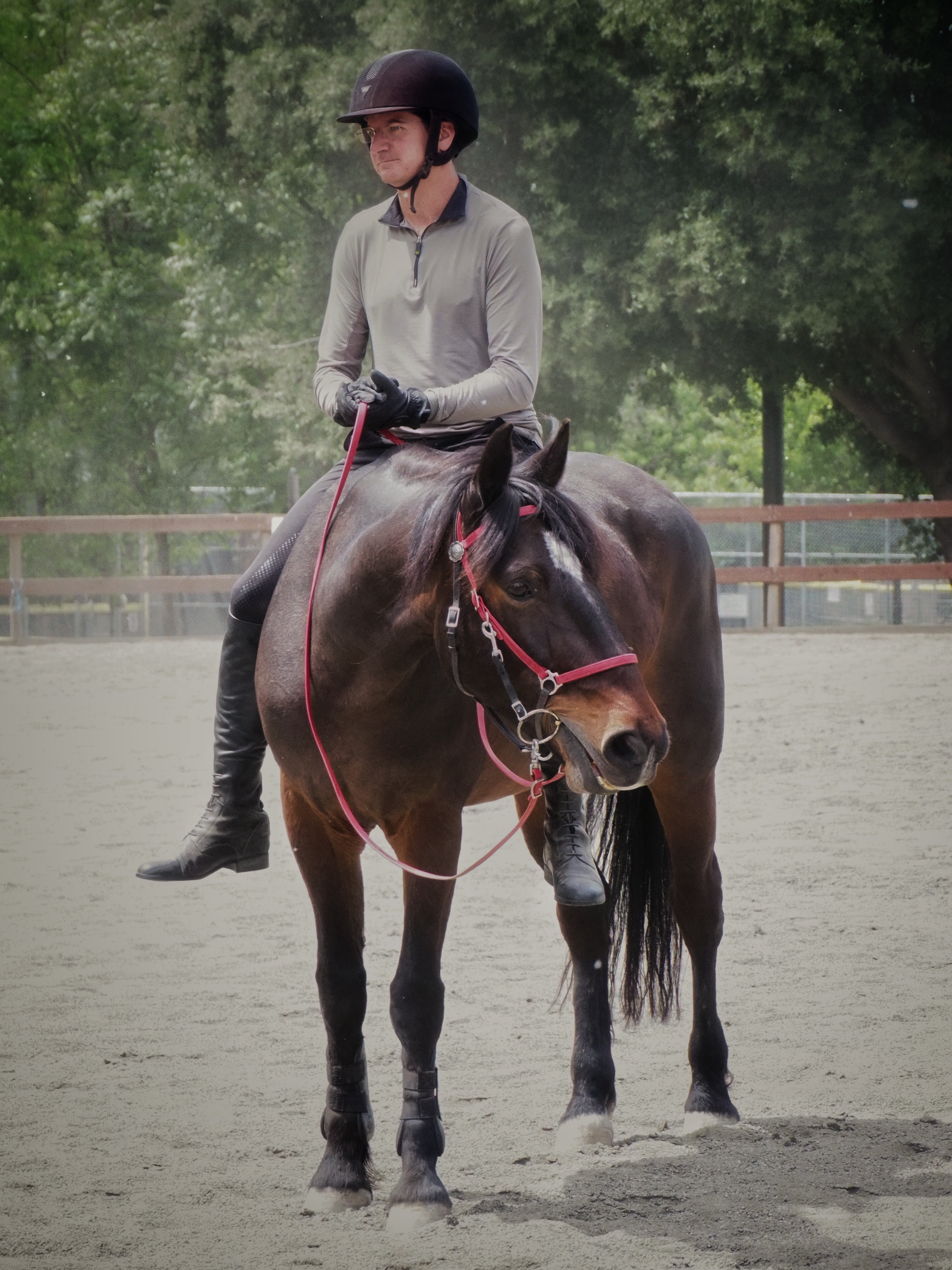 The next class was Egg and Spoon. This class was my husband, myself and my friend on Pixie. We’ve done this class a few times now and my husband always beats me because he actually has hand eye coordination, but I finally won this year. 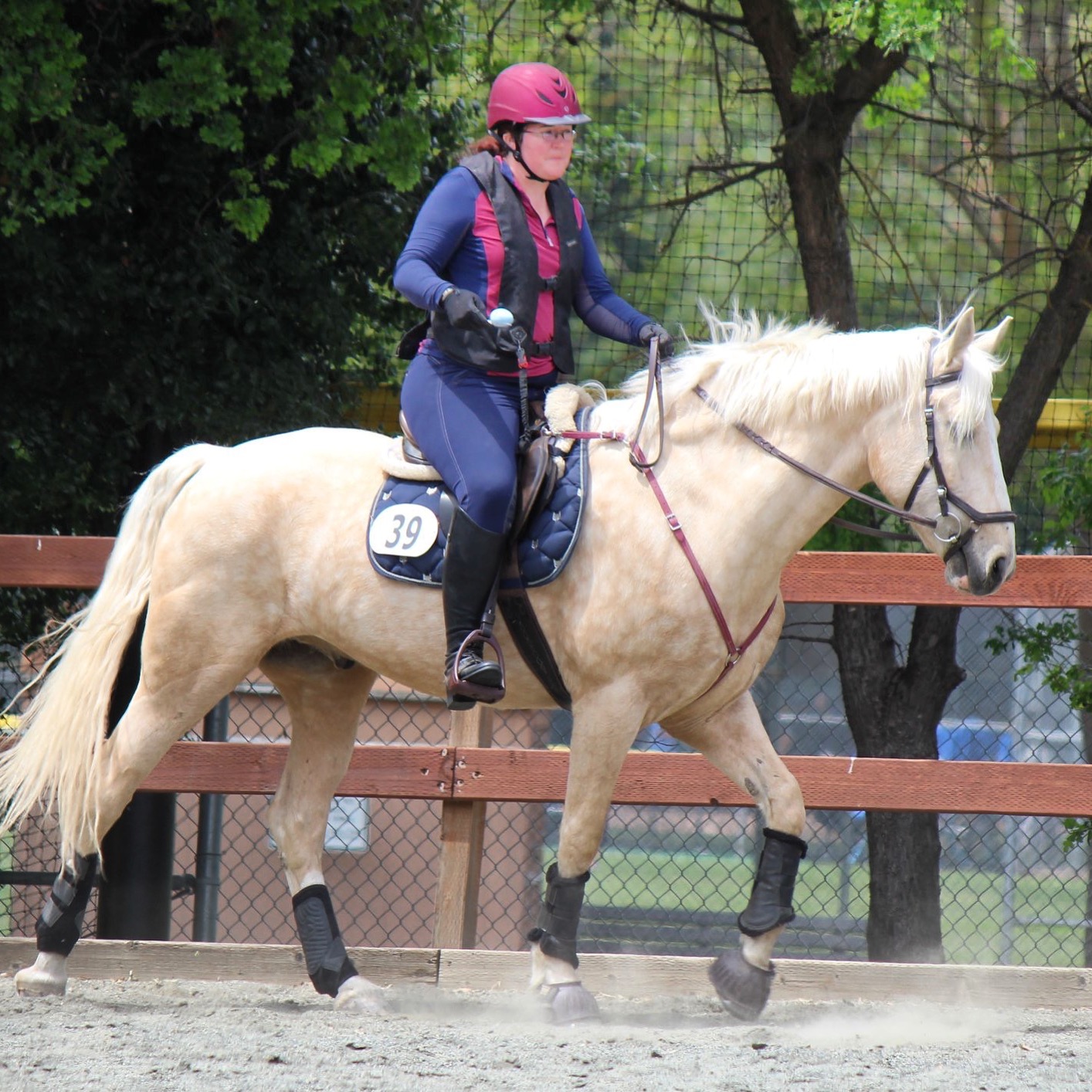 Next up was the water cup race. My friend and one of the boarders joined this class. You start on one side of the arena with a cup, ride to the other side and scoop water out of a bucket on a barrel and then run back with the water and fill your bucket.

For the first heat, it was me and the other boarder. Because her horse is very green and excitable she asked if we could walk the first lap and I said sure. Once we’d done the first lap, we started going faster and her horse was adorable, he was like, omg a race, I can go fast, look how fast I am.

Although Levi is super slow, I managed to go slow enough to not dump my water out on the sand while racing past our bucket like some people I know. 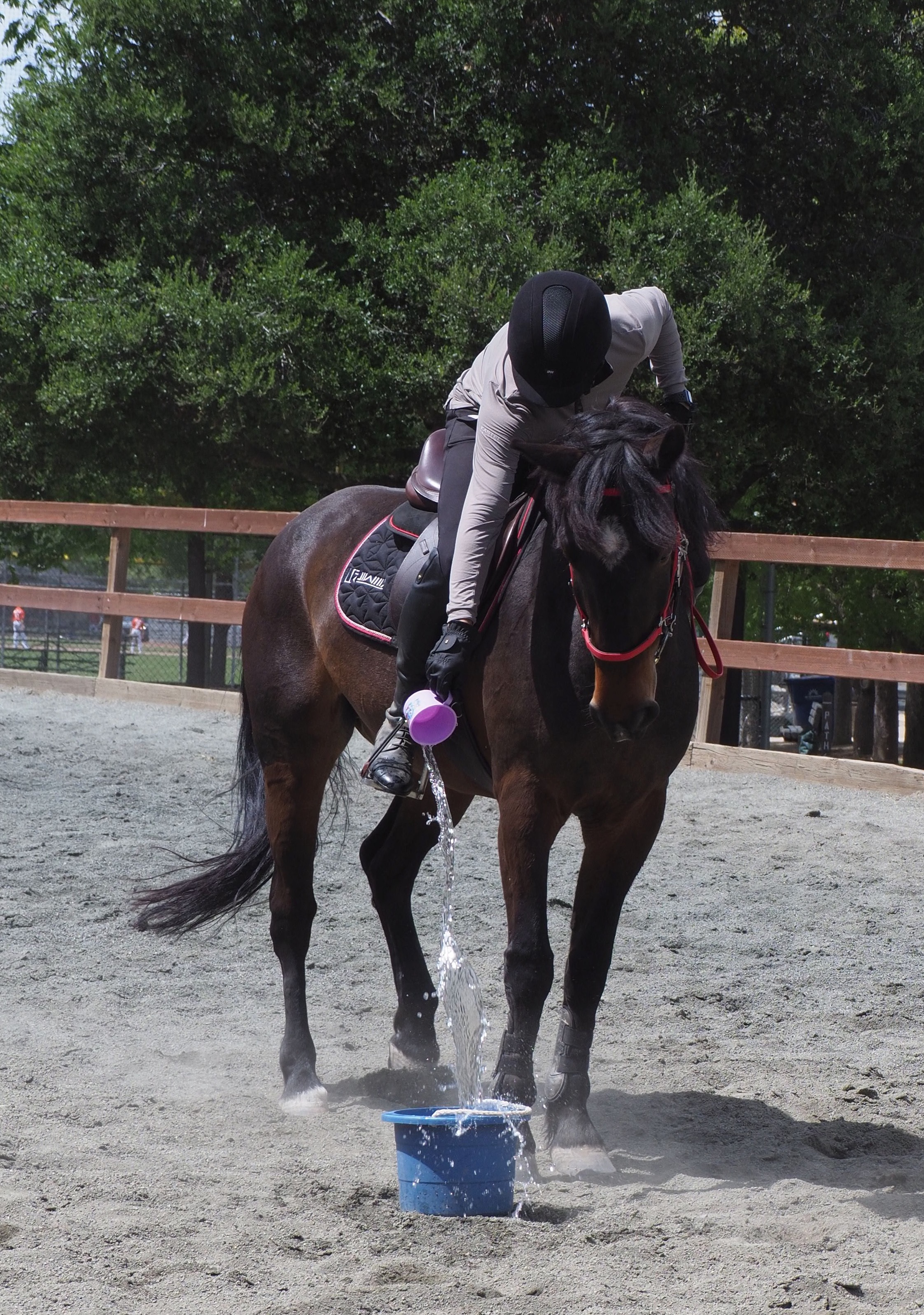 Eugene is like, “umm why are you spilling half the water when I am standing still?”

And we were tied. They even poured the water into cups to check because the level was that close. We got to do a tie breaker round and they had to check that in cups too. Initially they said I had won by the tiniest amount, but I admitted to a bit of unintentional cheating. They called time just as I was starting to pour my last water and a bit splashed in before I could stop. We agreed to call it a tie. 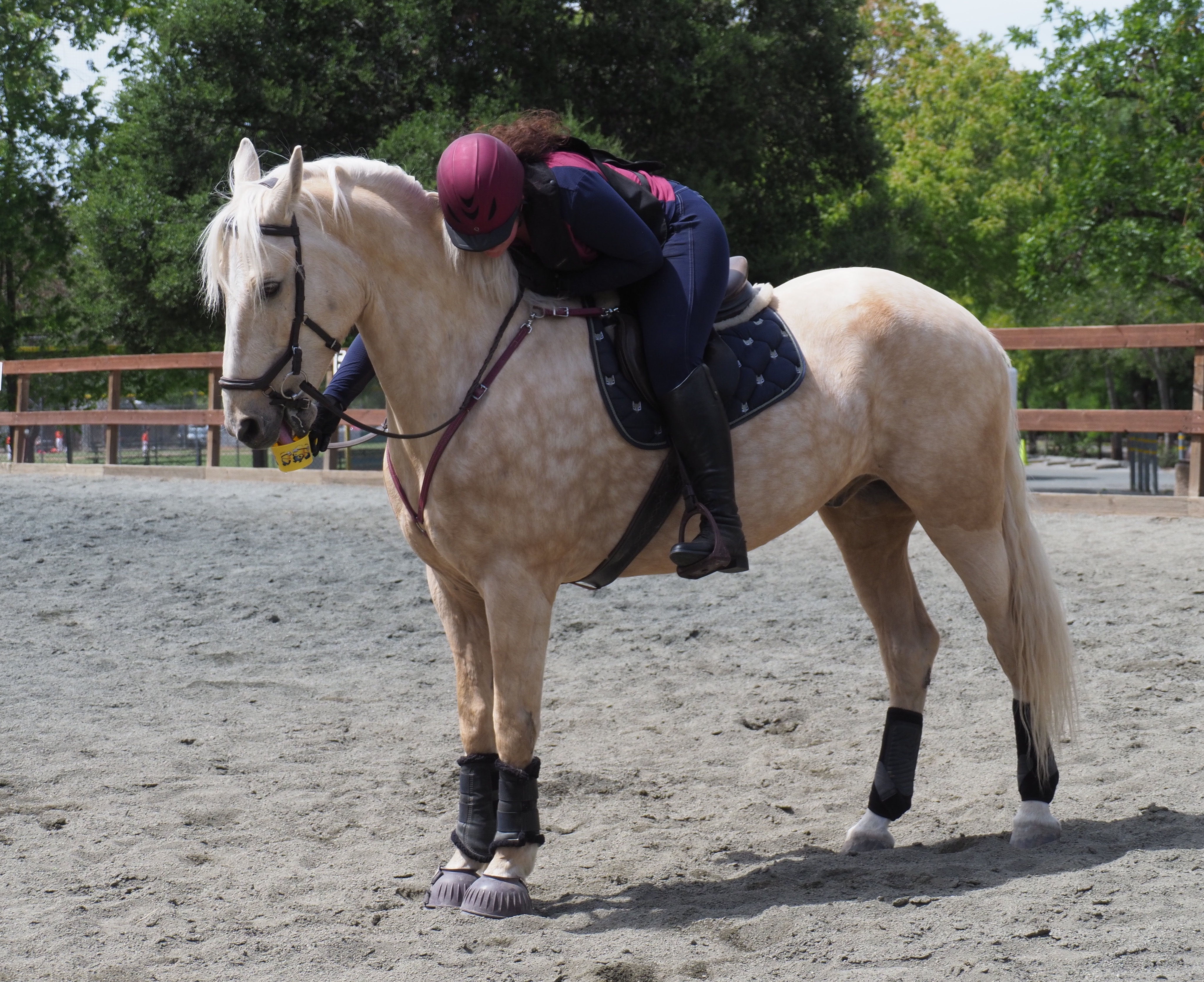 The competition was fun and all, but the best part of the water cup race was discovering the Levi and Eugene would drink from the cups. 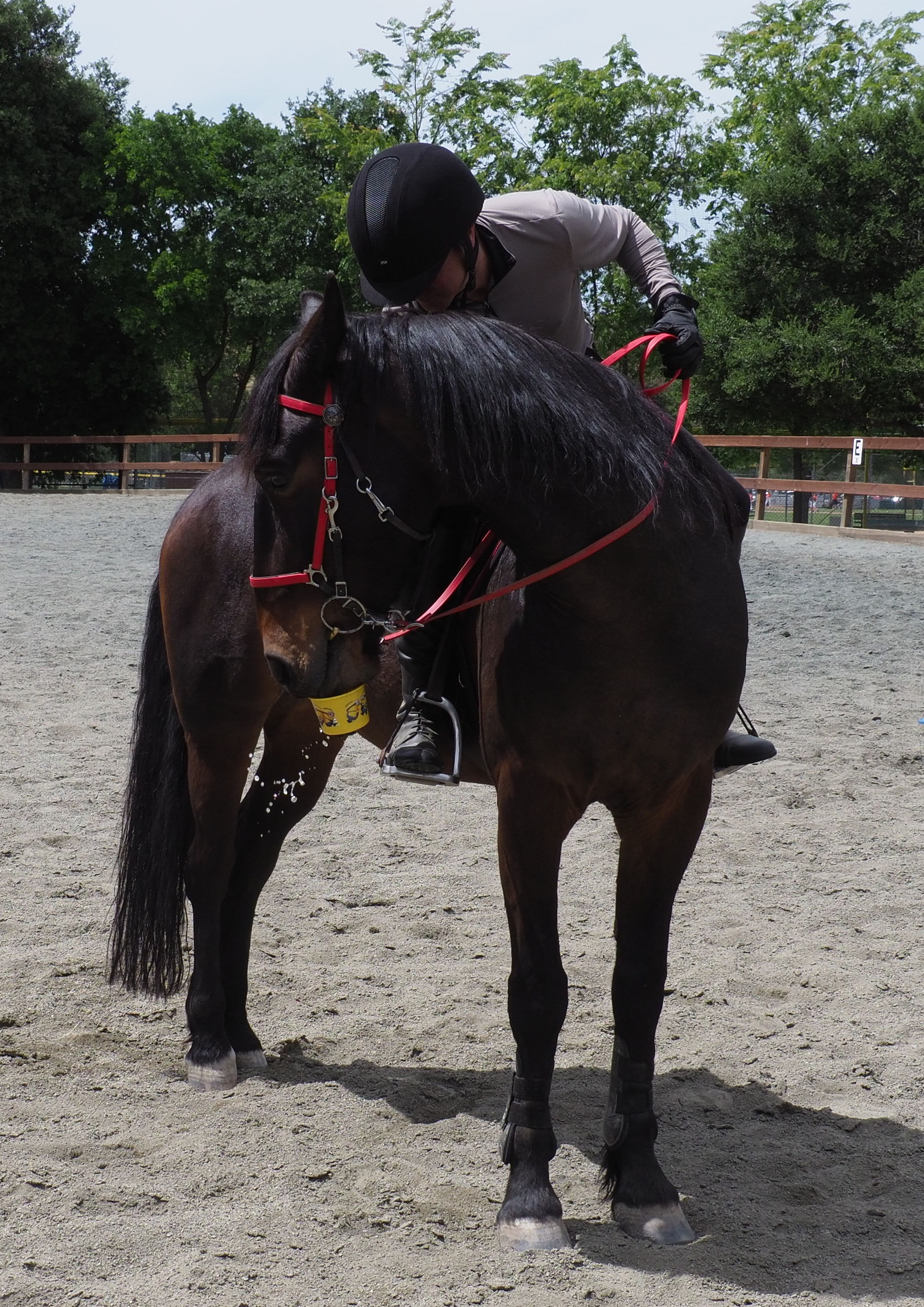 Levi and I did the first part and it was all fine. Then Axl had a Rat Race moment and lost his mind a little bit.

He was so excited about going fast she couldn’t even get him to go around the barrel at first. He was too busy winning to make turns. 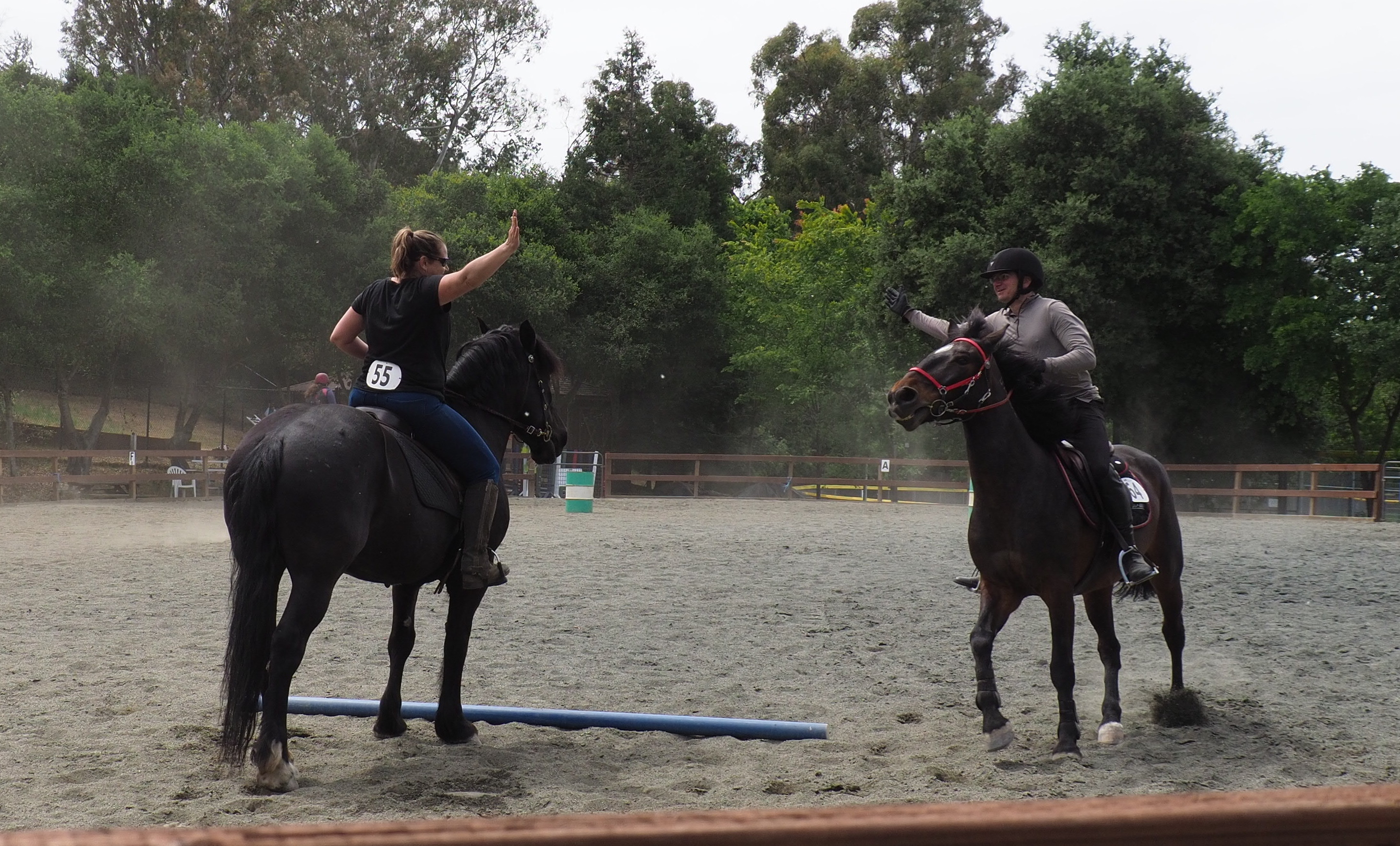 I thought it was all pretty hilarious, but apparently Levi doesn’t share my sense of humor. I guess he takes winning more seriously than I do. 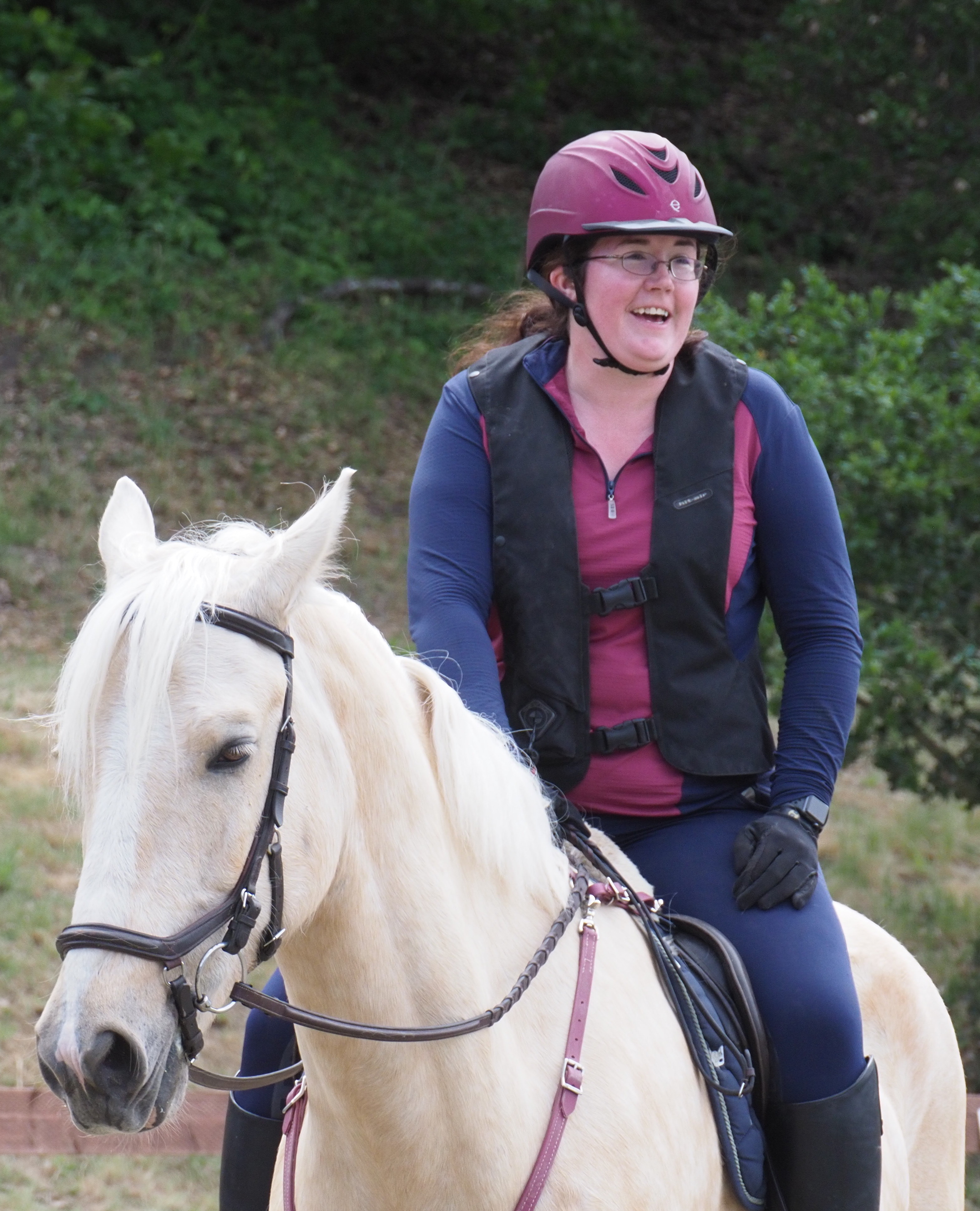 Next up was the trail class with all the Mustangs: Levi, Eugene, and Devro. This course was tough. My husband helped set up the obstacles and when he came over to tell me it, I was like, do you want us to die? The course was: Cones to evil black mats of death to scary construction alley to umbrella obstacle (pick up umbrella, open it, ride around a barrel with it, close it and put it back on barrel) to ball and water (have horse move the ball then walk over the fake water) to back through an L, canter around to stop in a square.

The umbrella part was what had me concerned, but it turns out there was no reason for fear there as Levi really could not have cared less. I tried to show him the umbrella before opening it and he was like “I don’t care.” So I opened it real slow and he continued to be like, “why is this taking so long, I don’t care.” It was also slow because I couldn’t figure out how to get it to open for a moment there.

Last year when we did he trail course backing through the L was cause for a complete /temper tantrum including attempts at rearing. This year it was just terrible. In talking to the judge she said my husband and I got about equal scores with his backing through the L being better and my stopping in the square being better. I didn’t even care. I was just happy he did it without a meltdown. 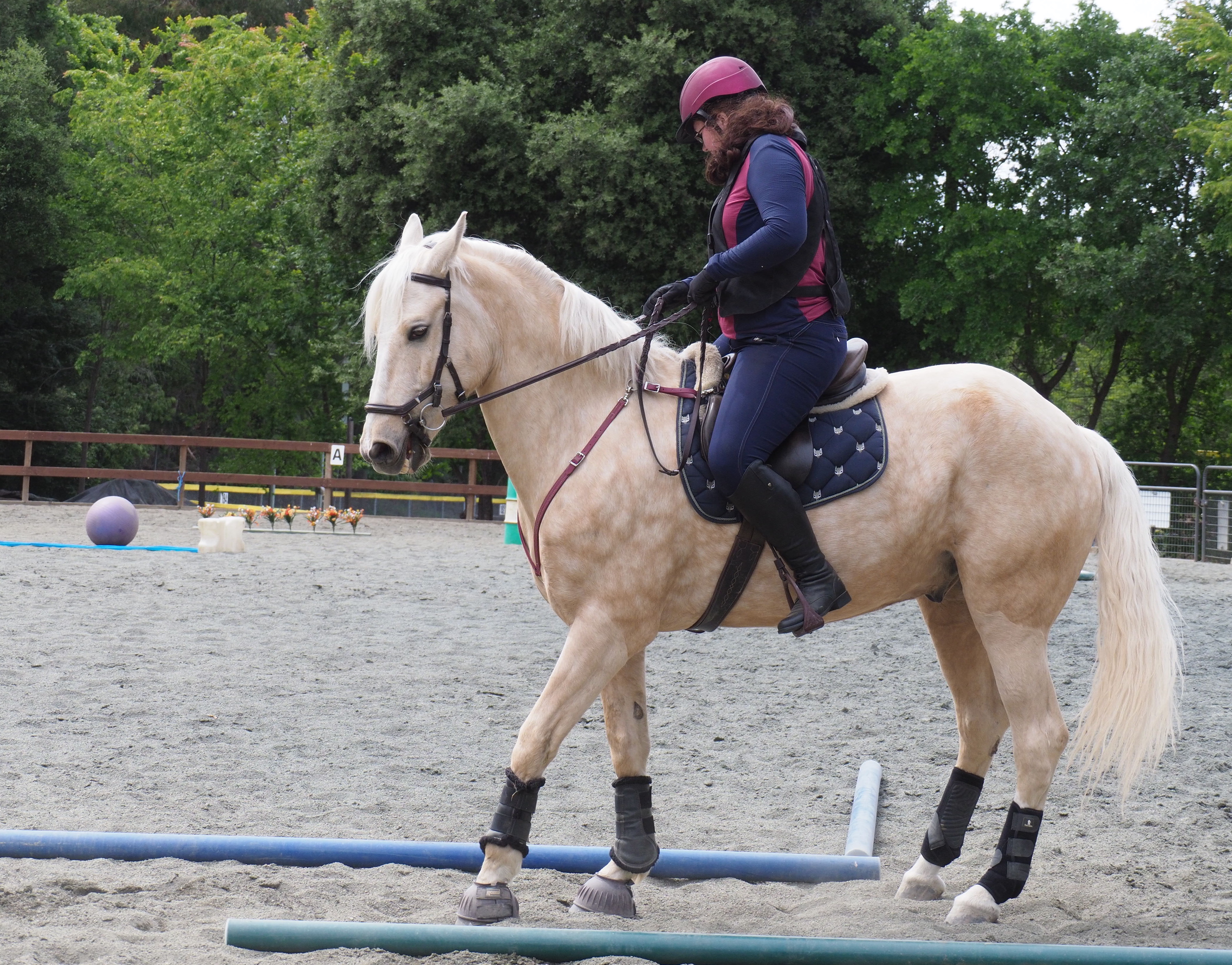 His face says I hate you, but the not rearing says it all

My husband completely missed stopping in the square and had to turn around and try it again. Pros! 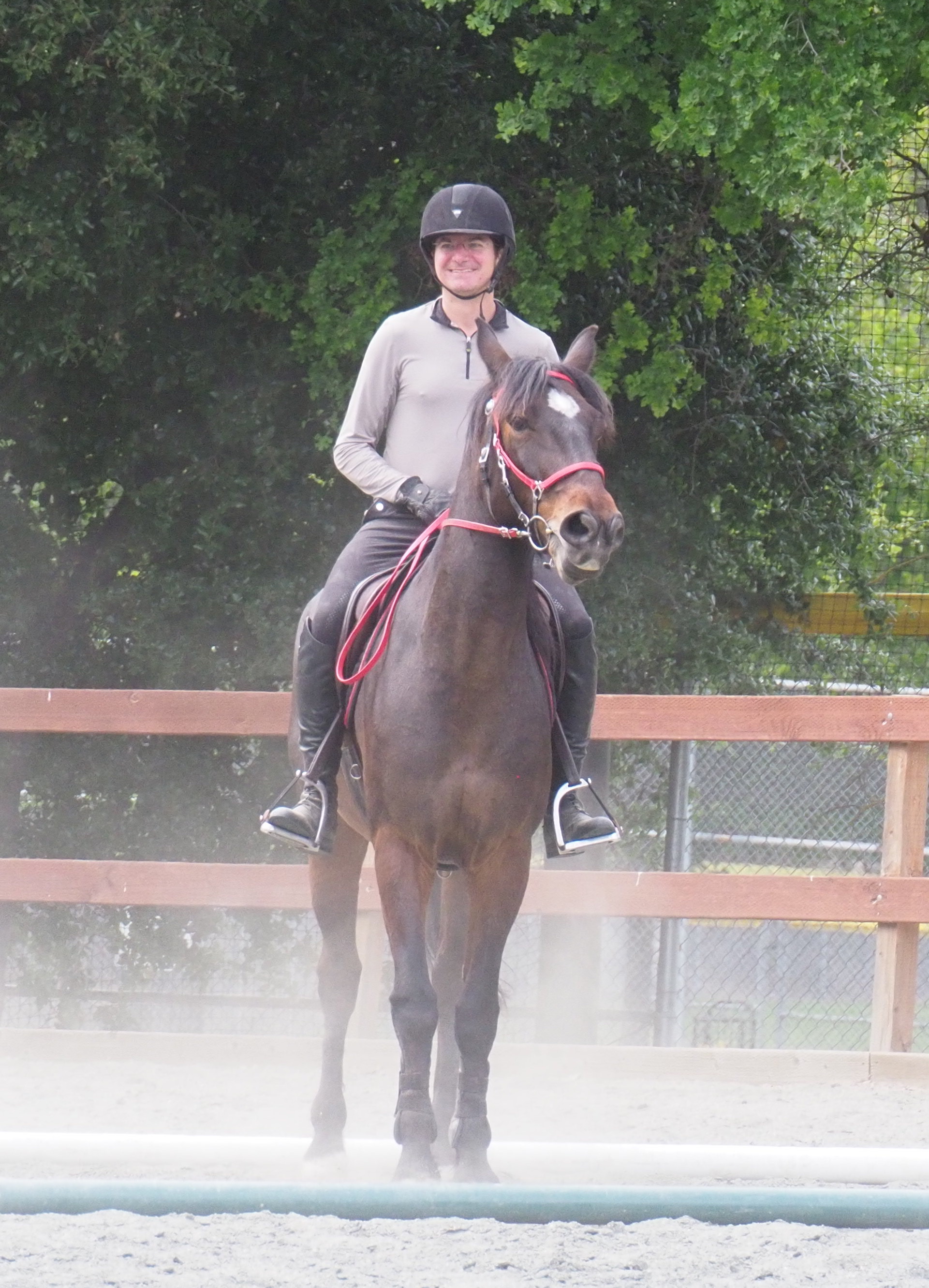 Devro was next and he was terrified of the construction alley. I eventually went in to lead him through. Even with Levi going through it, Devro took a few tries, but we eventually got him through. 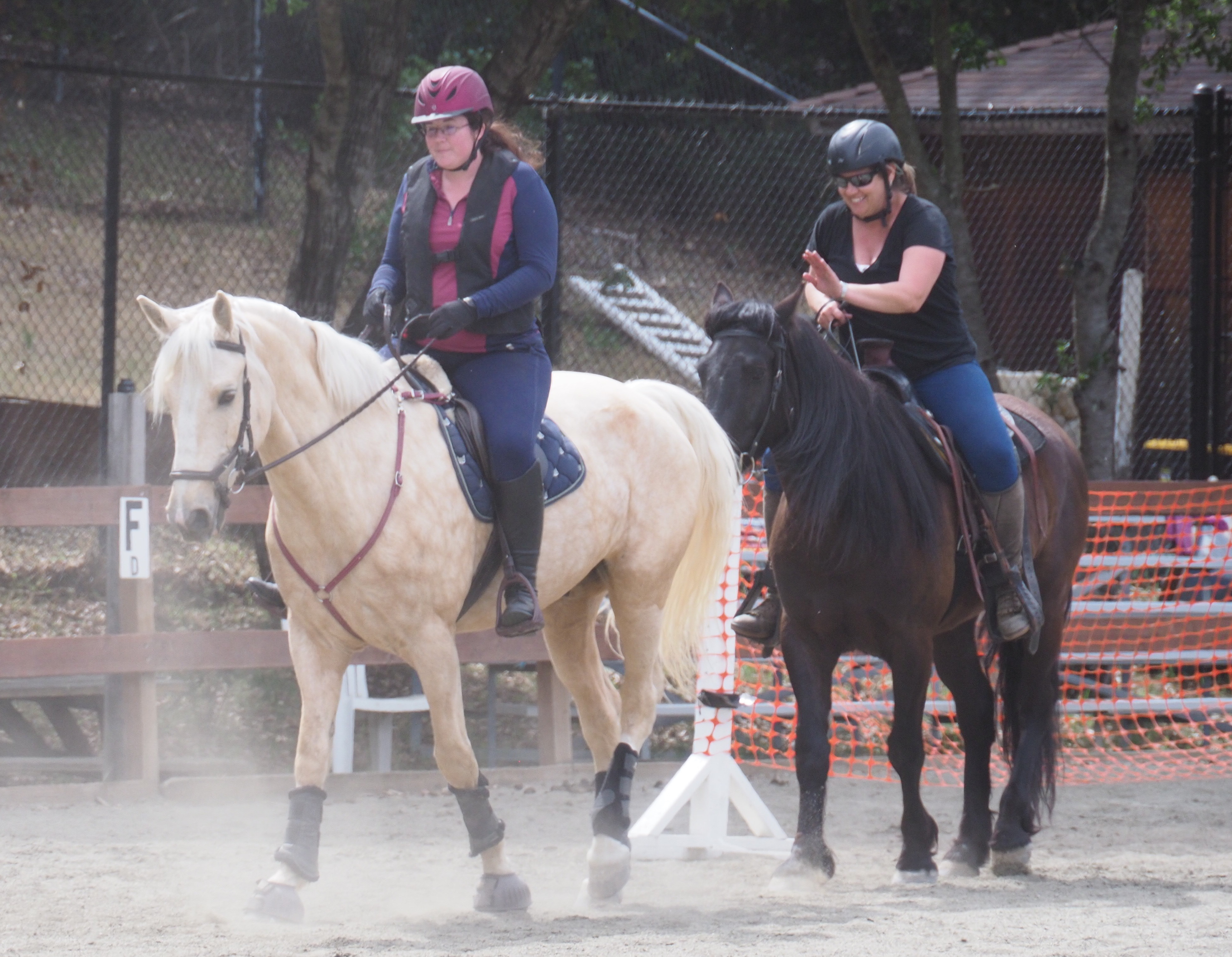 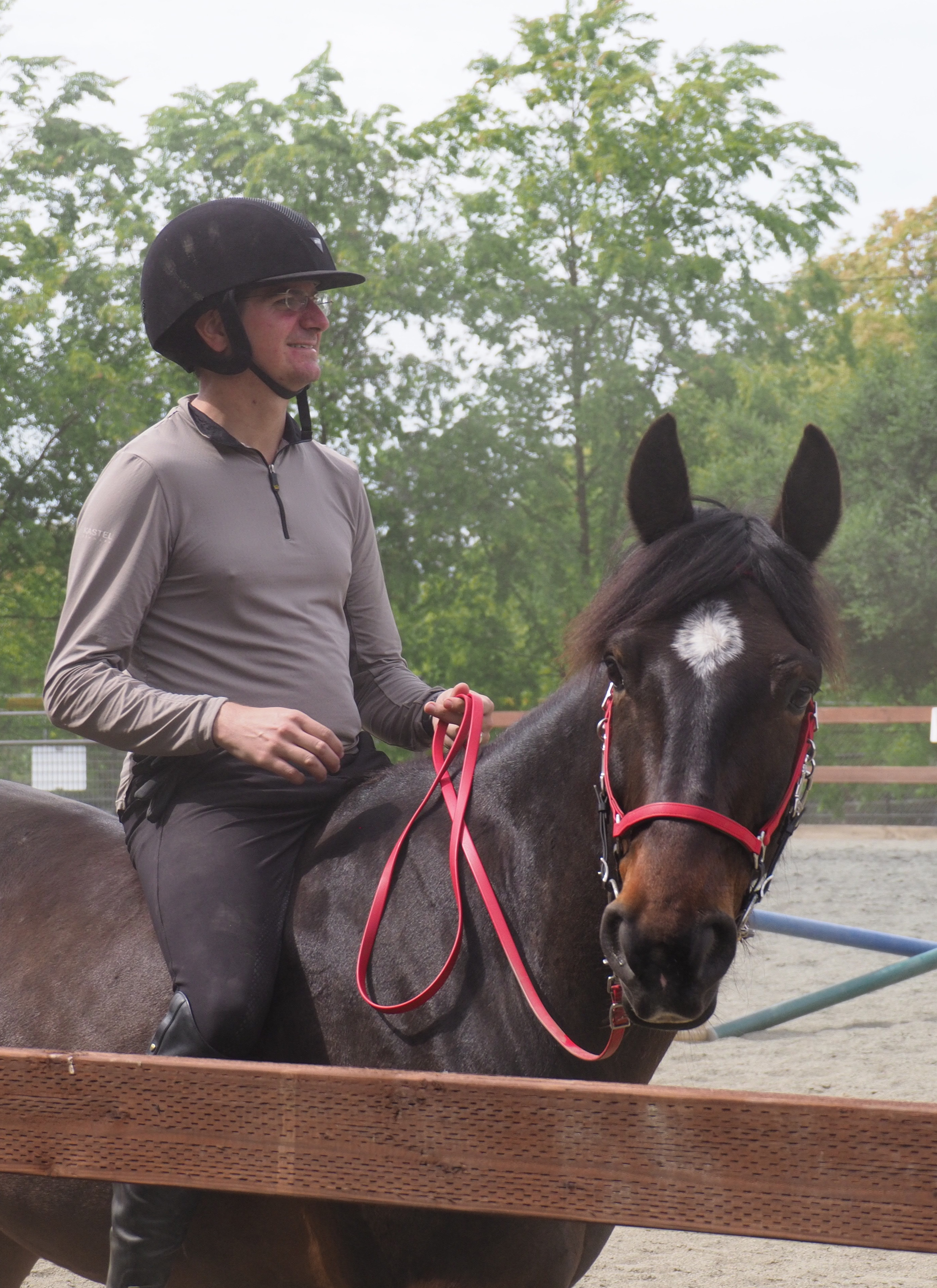 We are both so slow. Like it’s painful to watch just how slow we are. But: 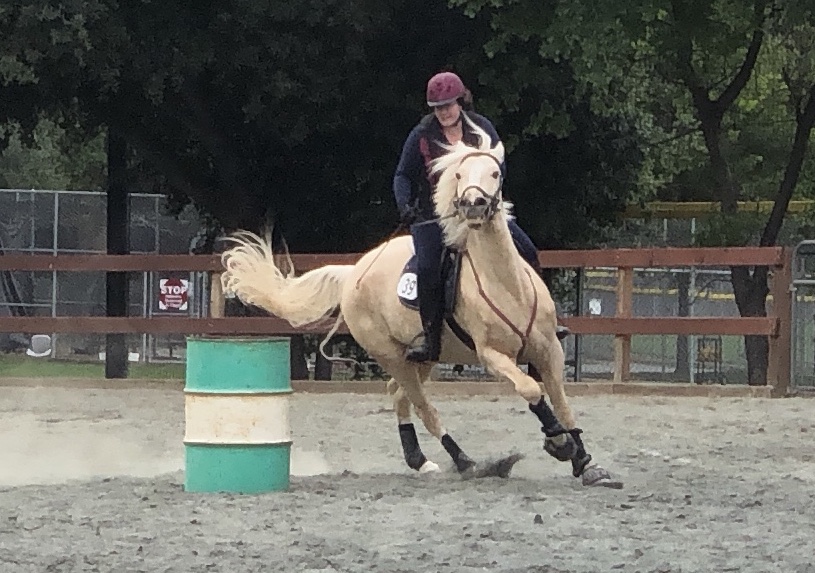 It was a super fun day. I would totally do more fun shows like this anytime. Have you ever done games classes? If so, what are your favorites?