We had a bit of a break between stadium and XC so my husband and I wandered over to walk the course. This course was even easier to remember that the stadium. Down the field, u-turn, back up the field. The hardest part was finding the first jump, which is far from the start and hidden behind a little downhill. It was also one of the biggest jump on the course. Why the biggest jump was placed first and on a downhill is beyond me. The other woman doing intro shared my concern. And Levi loves to stop at the first jump. My husband said it was small enough to walk over it, but I didn’t think so. I didn’t start at the start or walk all the way to the finish for my coursewalk because RDLA doesn’t time them, but here’s the coursewalk if you’re interested.

Now, I recognize that #1 isn’t actually that big, but it was bigger than the others and the downhill approach was concerning. You also need to remember I’ve never even school Levi over XC. And I’m a wuss.

When it was time for XC, I hopped him over a few of the stadium warm up jumps and then rode over to the XC field with the other woman doing intro who thought her horse might not be willing to go by himself. She went first and Levi was pretty good about hanging out by the start and not loosing his mind because the only other horse he could see had left him. I kept him occupied with eating dead weeds. Then the woman came to finish and apparently decided to have a redo. I didn’t know that was a thing. While Levi had held it together for her leaving the first time, the act of his new best friend returning and then racing off again just about broke his tiny brain. He threatened to have a meltdown, but I managed to stay on and not let him bolt off bucking like he did at Camelot.

Finally, they finished again and it was out turn. Levi was a bit hesitant about leaving his new best friend, but I got him going. He looked hard at jump one and squirreled his way to it, but he didn’t stop. He also definitely wasn’t going to touch it: 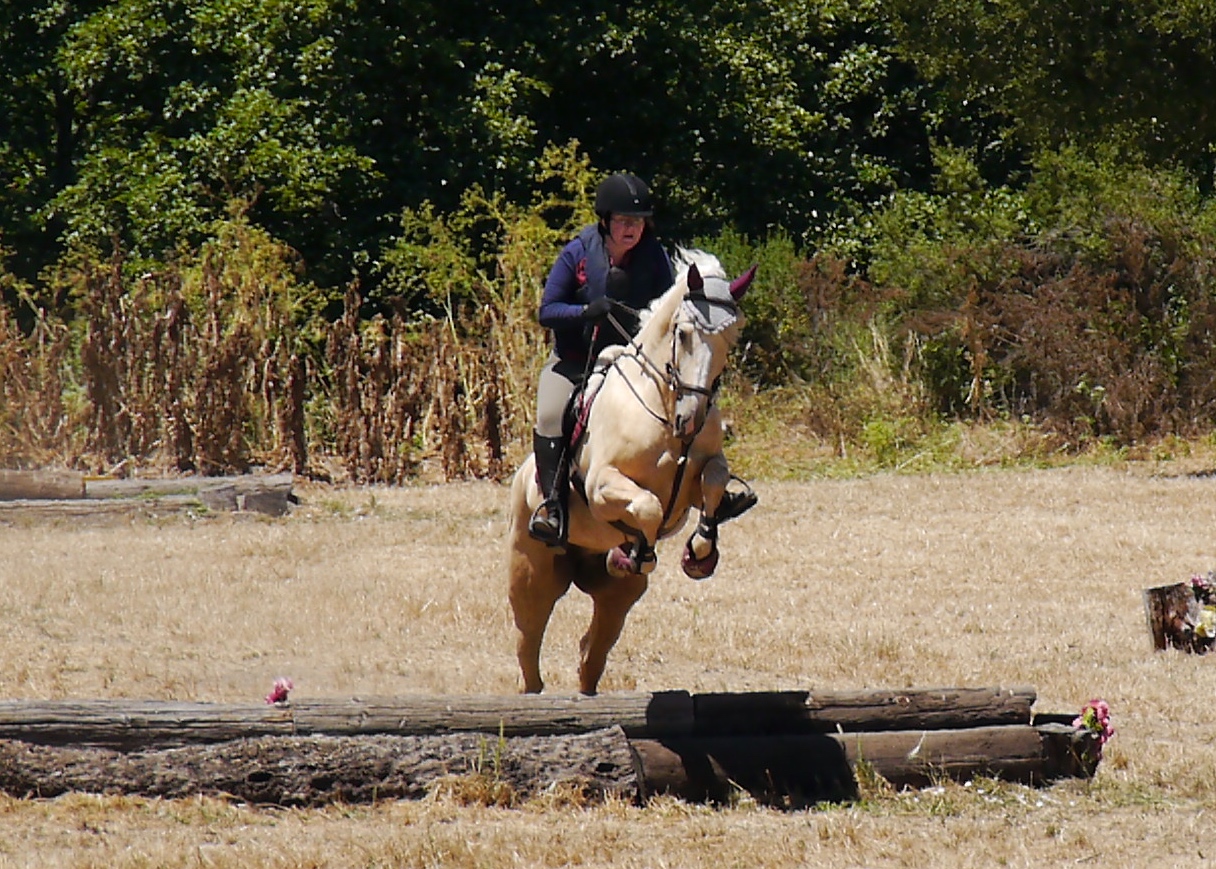 We landed going forward and not bucking and even managed to get a straight approach to jump 2. Which he was also not touching: 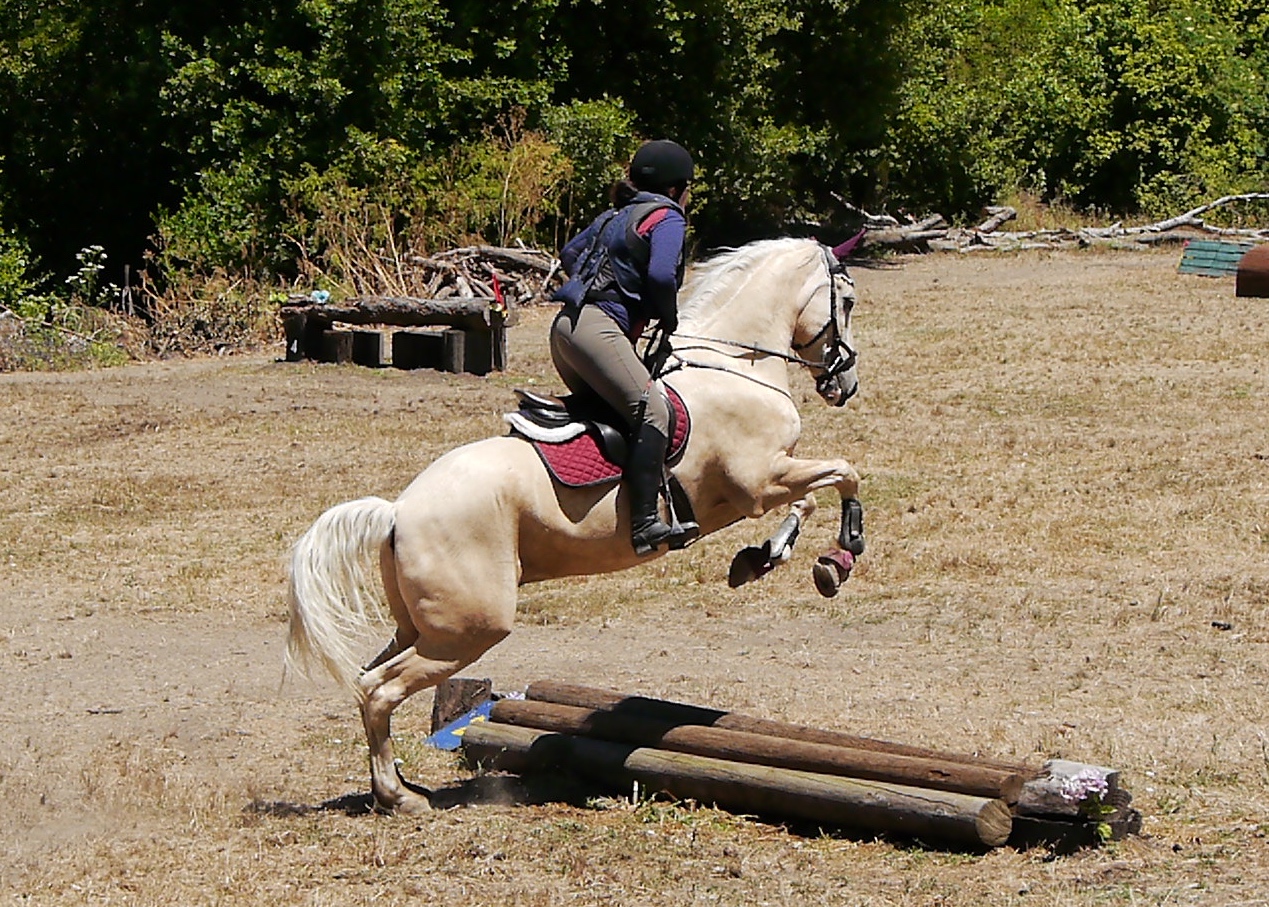 I do not know why he’s rocking back so hard, but I love it. I spent a completely unwarranted amount of time very badly photoshopping the jump out so that I can pretend that we’re not failing at jumping equitation, we’re just excelling at high level dressage. 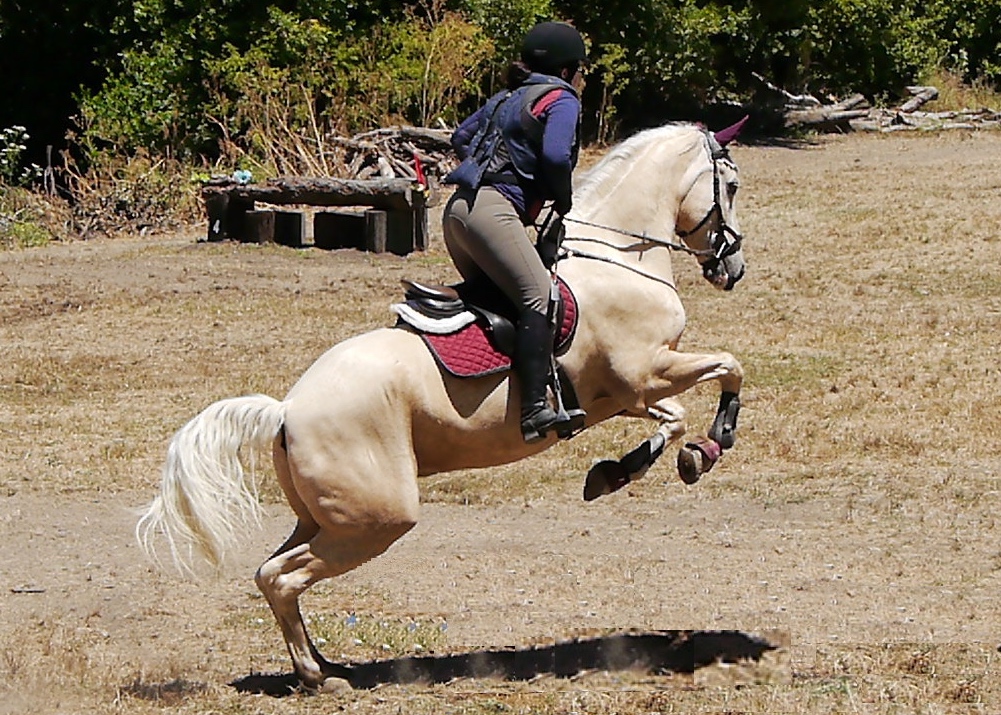 He did land going forward without any antics and jumped three at it’s actual size. 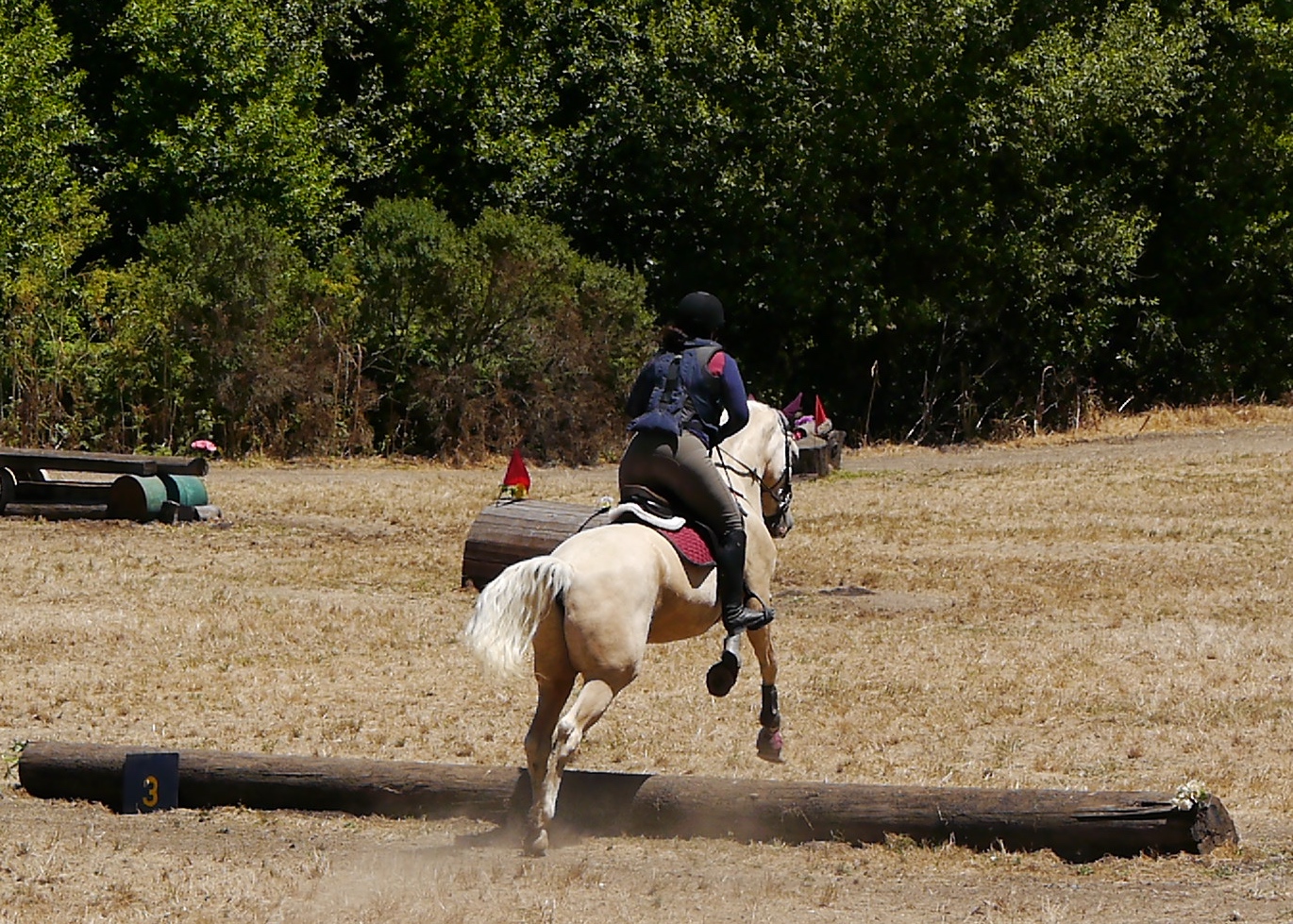 I don’t have a picture of jump 4, but it went well. Then we went through the trees and came to 5. He actually really wanted to go at this point, but I didn’t fully trust him not to bolt off back to the start, so I held him back a bit. 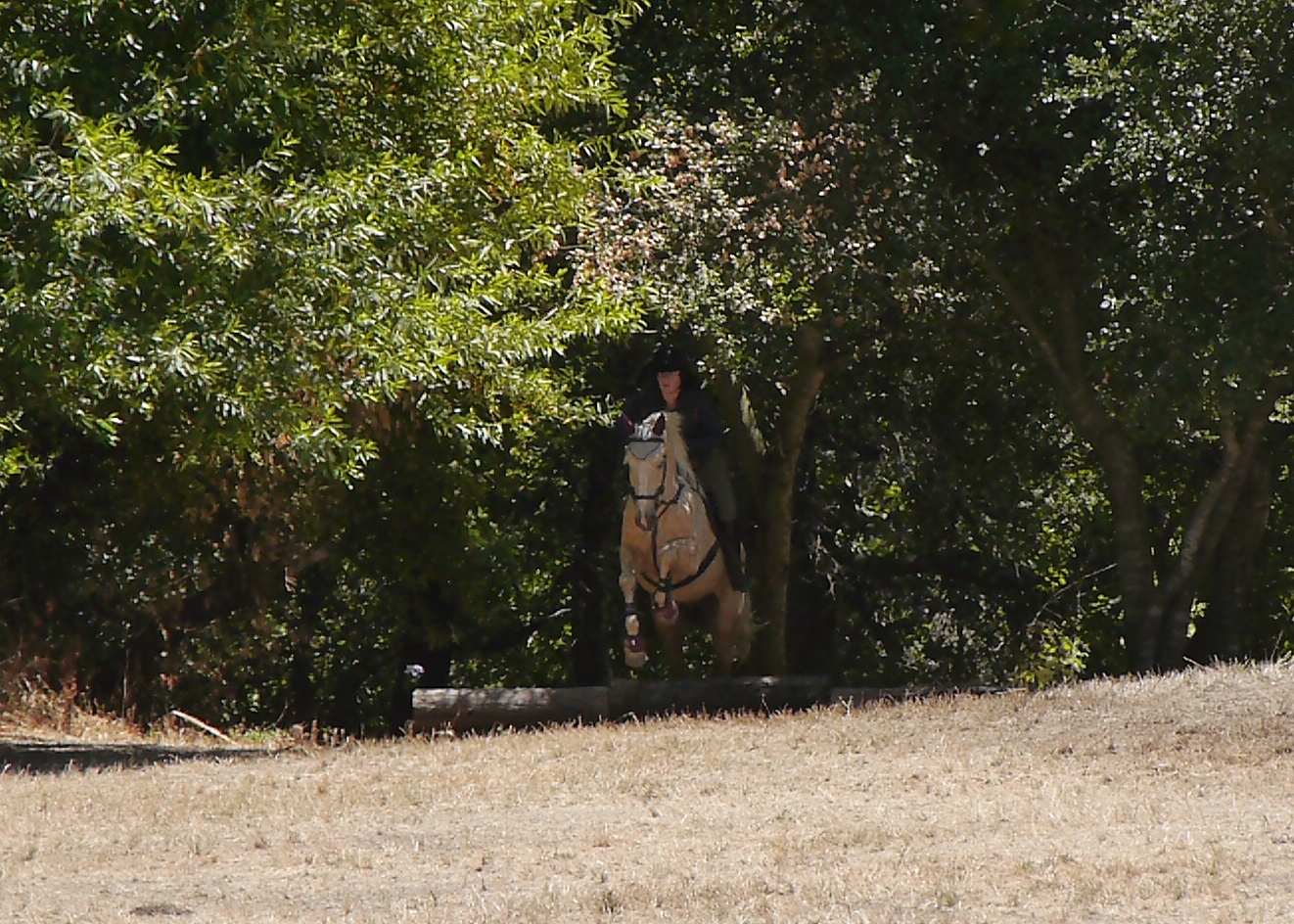 Then we wandered around like idiots because I couldn’t find 6. The number had fallen over and the backside said 4  in a different color so I got really confused. Since we weren’t being timed, I just circled around, found it and he popped right over. My husband failed to get a picture of the jump itself, but did capture the sass afterwards. 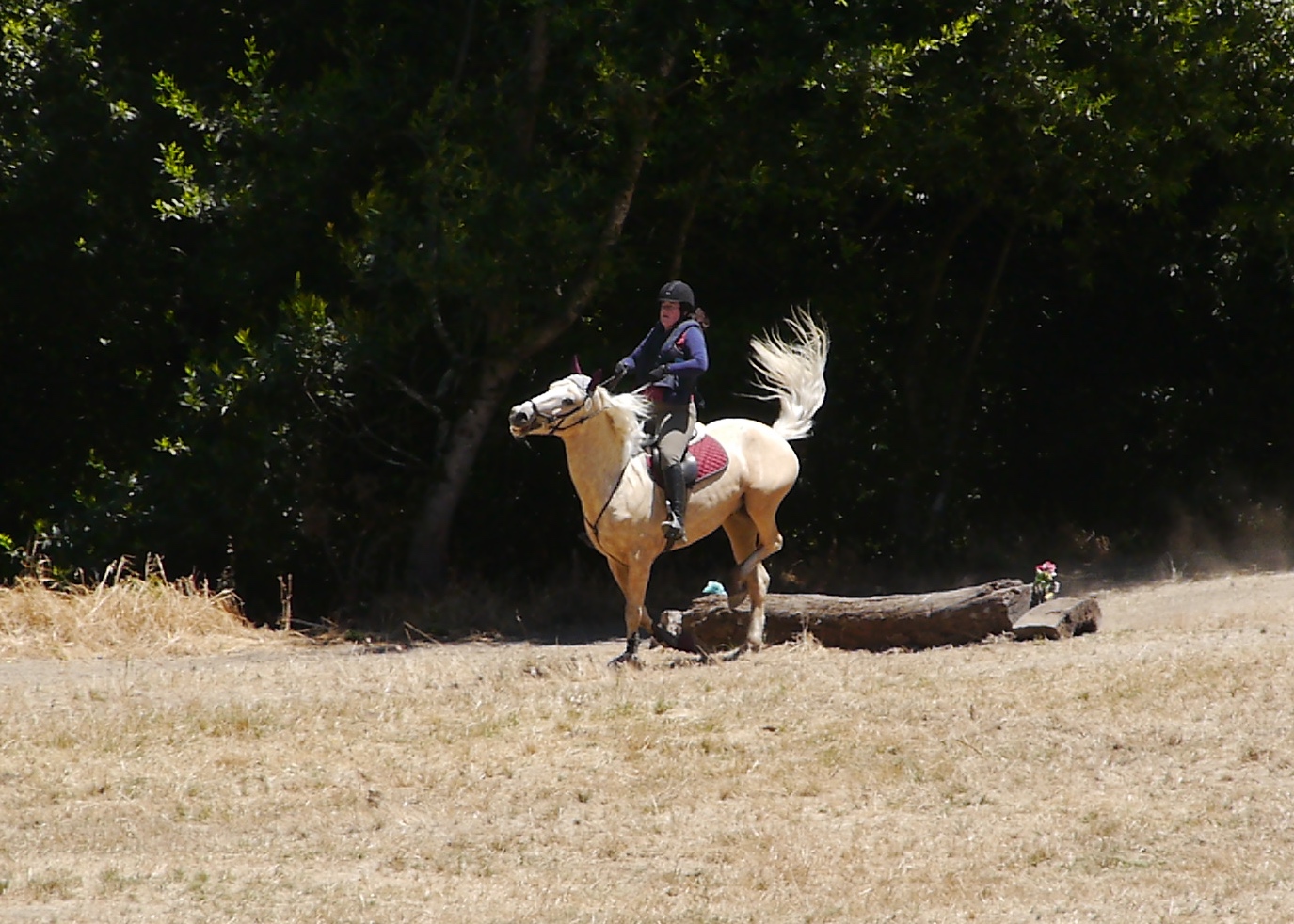 He did seven perfectly. Locked on, ears up, didn’t rush, didn’t over jump, and landed with no sass. He did need to look at it though. Just in case.

He was great for jump 8 too. Just took it in stride. I’m also super happy with my position in the picture. If only I rode like this all the time.

And then we had jump #9, which I knew was going to be a problem. I don’t know why, but all of our horses have found #9 to be scary. Maybe it’s the stripes or the fact that they’ve just jumped a ton of logs and the box is different, I dunno. He wiggled hard and when I wouldn’t let him escape sideways, he really wanted to stop, but I refused to be a part of that either and just made him walk over it. 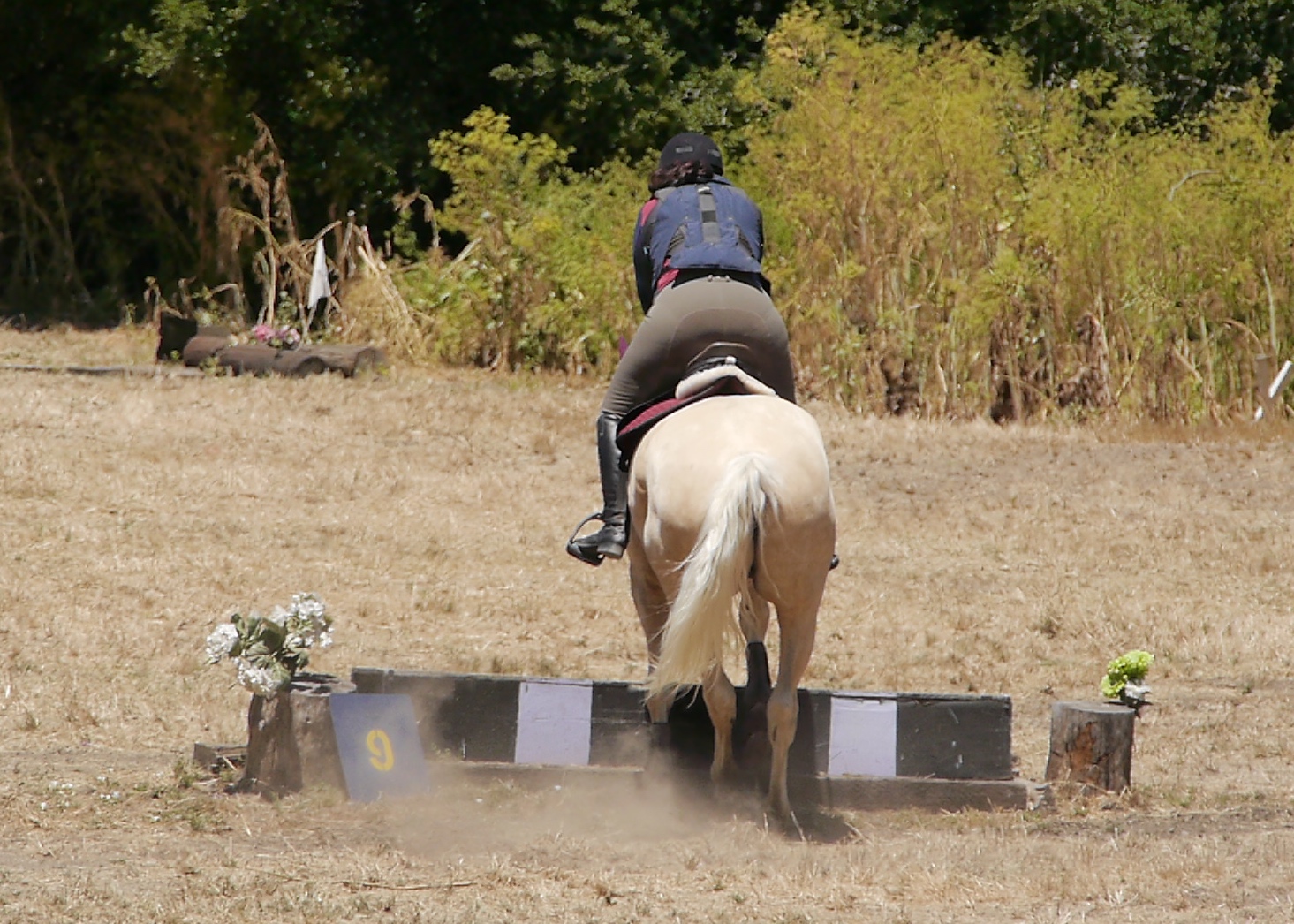 I figured jump 10 would be scary too because it was also a box and had plants decorating it. Once, he saw it, he confirmed my suspicions: he was pretty sure it was out dangerous. He wanted to wiggle, but I just jammed my legs on, gave him a tap with the crop, and tried to get him as straight as possible. He jumped it, but made sure not to get anywhere near it just in case. 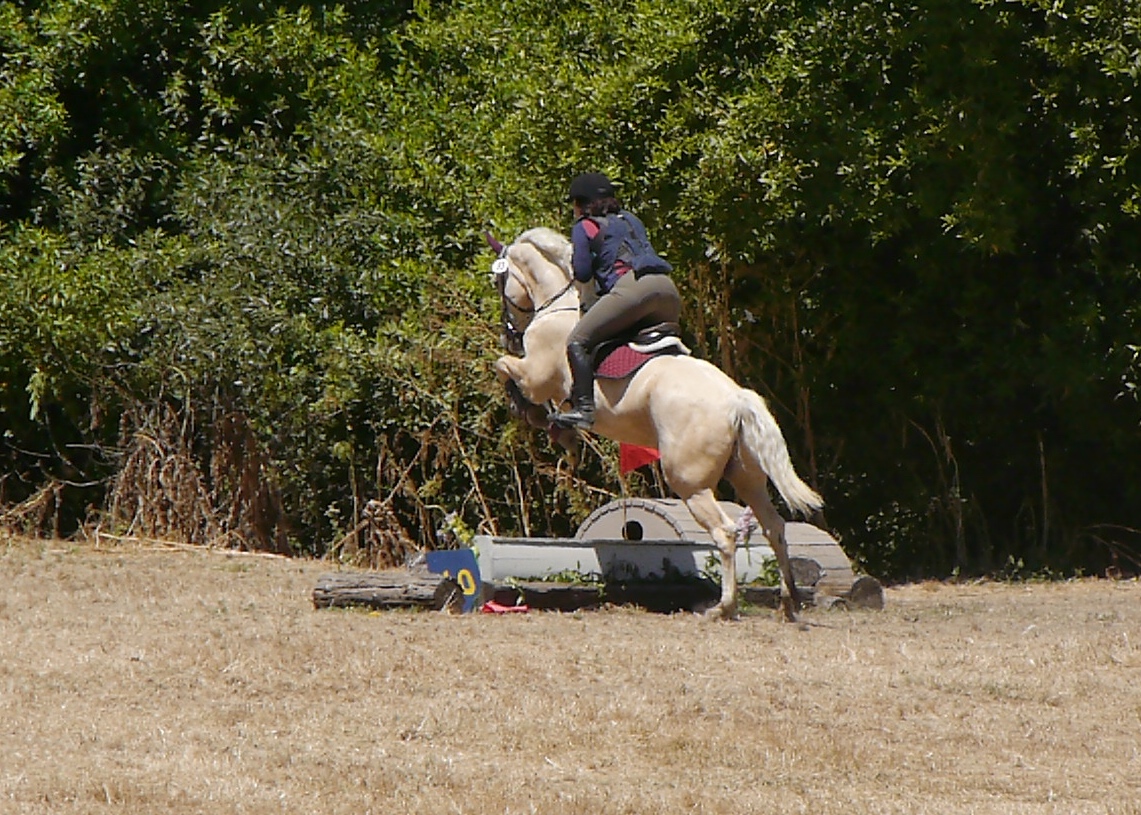 look how tucked up his little legs are

Landing off of ten, he was feeling great: there was no sass, no bucking, just enthusiasm. 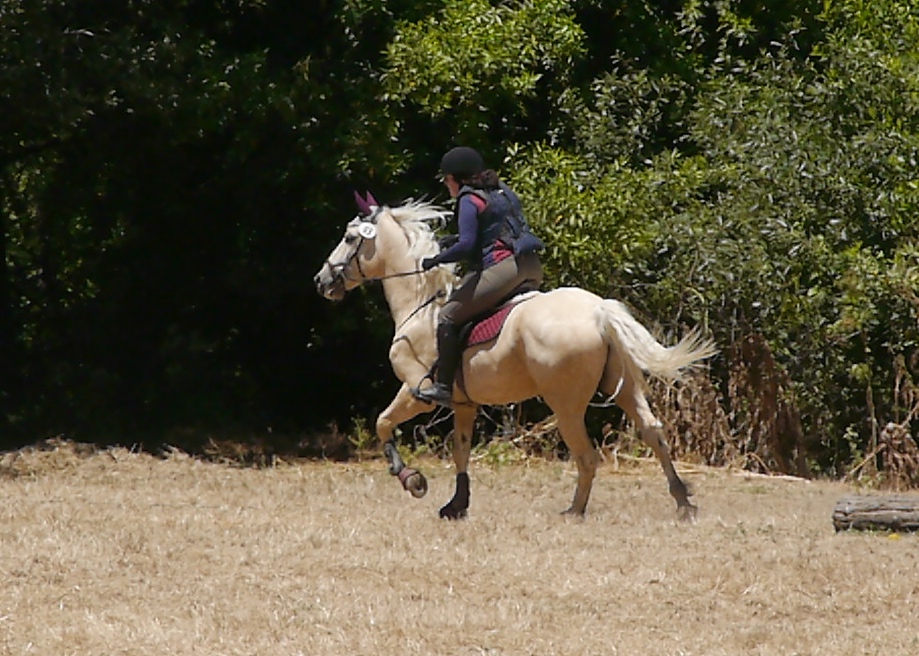 And we cantered through the finish with me patting him and yelling “good boy!”

Technically the other woman who did intro did the intro A test so the show manager considered us to be in 2 separate divisions. I have no idea why they even let her do that though; the entry form only had one test option for the intro division. I mentally considered us to be in the same division. She was ahead of us slightly on dressage, but had refusals in stadium and XC and we were clear for both so we won. In my mind. But whatever: I’m claiming it. 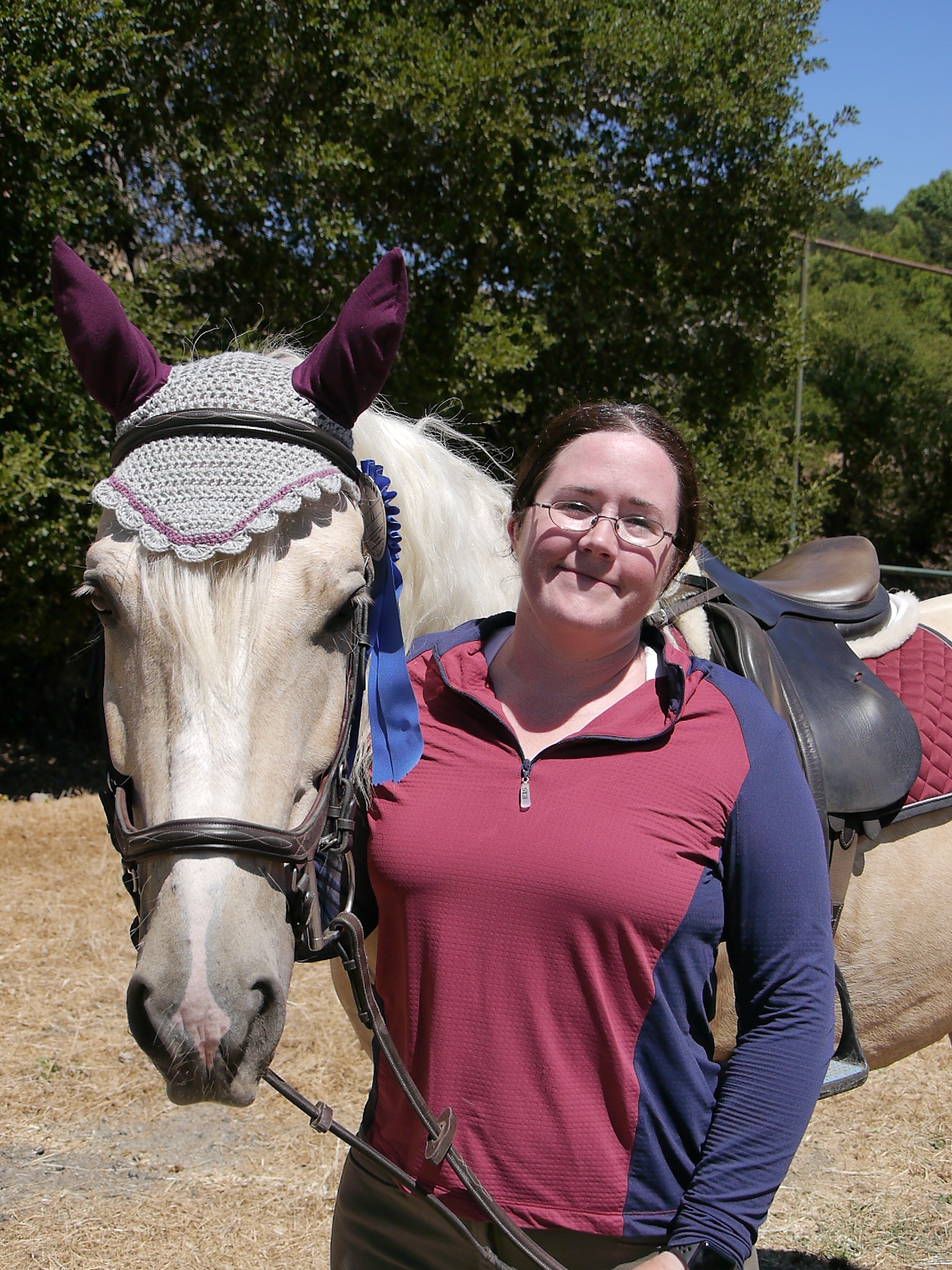 The real victory was how good he was. I was happy to take even a pity ribbon. I’ll add it to his collection and it’s a nice souvenir of just how good he was. And he was so, so good. He not only exceeded all of my expectations, he was also actually enjoyable to ride and work with.

Stay tuned for tomorrow’s post about my husband and Kate schooling Levi over XC.