Last year we were supposed to go horse camping up in the Sierra Mountains over Memorial Day weekend and it ended up raining there. So we went over to Joseph D. Grant instead. This year, I once again made reservations at Skillman Horse Camp and then watched the weather like a paranoid person. Thankfully, the weather was bright and sunshiny – and actually rather unseasonably hot for CA.

Thursday night and Friday morning were spent prepping food and packing. It’s the worst part of camping. Actually unpacking is probably worse, but that’s another story. On Friday we ended up loading the ponies and leaving the barn around 12:00. We couldn’t actually leave any earlier than 10am because rush hour lasts until 10 around here. And it starts again around 3:00. Or 2pm on a Friday. But I thought we’d be safe around noon. I was wrong.
We just kept hitting traffic. Every time we got through one bit of completely stalled, bumper-to-number traffic, we’d hit another. Our ETA kept climbing and climbing, and I was worried about the horses baking in a trailer that wasn’t moving. It’s a 3 hour and 20 minute drive in a car. I knew we’d be going slower with the trailer, so I guessed 4 hours. It took us 6 hours to get there. And we ended up taking some “creative” back routes through farm country.
The horses were very happy to get off the trailer. Nilla so much so that she didn’t fully turn herself around and tried to go sideways out of the half door. It was like this cat, but backwards and with more falling and the entire time I’m thinking she’d going to break a leg. She was fine though.

We had a really great camp site. It was over in the corner away from the majority of the other sites. The whole campground was full of towering pines and was shady and cool. The horse pens are great: really big and well constructed. 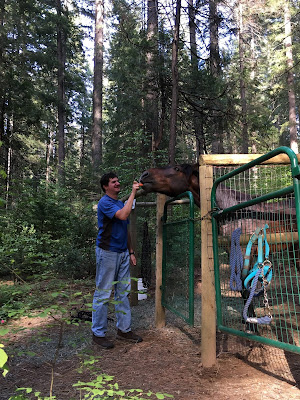 We got the ponies settled in with water and hay and then set to making ourselves dinner. Friday night was salmon and corn on the cob cooked over the fire. While it was cooking, I settled in my camp chair with my dog and a book. My parents got me this cool camp chair that comes with a foot rest last year and I love it. 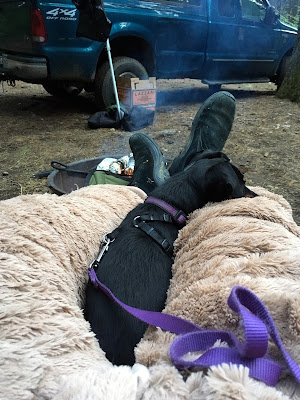 We sat out by the fire for a while before feeding the ponies their night hay and settling into the truck to watch a movie on the iPad.
Saturday we awoke to feed the ponies and the dogs then make ourselves chocolate chip pancakes. Once the ponies were finished their breakfast hay, we tacked up and headed out. There aren’t really any “destinations” from the campground, but we thought we might try to ride towards the Towle Mill Site that was named on our map. My husband had the actual published map of the area and I had a printout from the Gold Country Trails Council. They didn’t match each other and neither of them really matched the actual trails either.
I will say, the most frustrating part of riding here was how easy it was to get lost. We would be riding along, following a trail and come to an intersection. There might be a trail marker or there might not. Frequently there weren’t. We’d look at the map and think, okay, this is the first intersection since we left this specific point so on the map this must be that intersection on the map. This is logical thinking. But it doesn’t work out there. The maps didn’t have trails that existed and had trails on them that we never saw any evidence of. 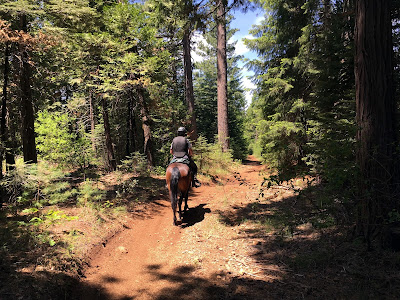 At one point we were on a jeep road, and figured okay, let’s just ride along this until we find a junction and then we’ll know where we are. As we’re riding along, my husband spotted a pond and we walked over to let the horses drink. As Eugene was trying to climb into the pond, I noticed that the water was burbling out of the hillside and realized this was a spring. I remembered seeing a spring marker on my husband’s map. Pulled that out and we finally knew where we were. Not where we thought we were, which was concerning. But hey, at least we finally knew. 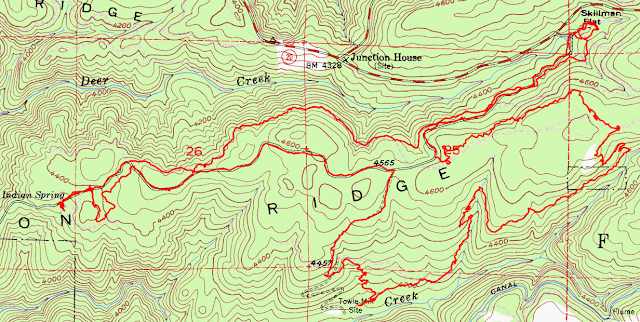 At this point we’re at the far left of this track at Indian Spring. So we go back east looking for a logging/jeep road numbered 20 12 3 on my map, but which isn’t numbered on my husband’s map. We take that south towards the Towle Mill Site. It turns into the Towle Mill Loop, which us a single track trail for hikers, bikers, horses, and dirt bikes. If you look at the bottom of the track, you can see that we ride over where the Towle Mill Site is. We never saw anything.
At this point, neither of us cared. We just wanted to find our way back to the campground. The Towle Mill Loop is pretty well signed (for this area, not in comparison to actually well-signed trails) so we decided to follow it back. Here’s the map I’m following for reference: 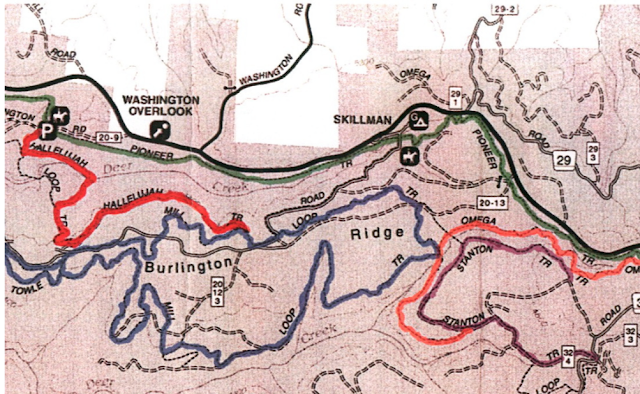 So we were following the blue loop through the woods and we came across a muddy puddle. The ponies were so thirsty they actually drank from it. Now Eugene drinks form anything and everything, so that wasn’t surprising, but Nilla wouldn’t even drink from the clean spring, so I was shocked to see her gulping up mud. It wasn’t even that hot out, they were in the shade, and they weren’t even sweaty, but apparently they were very thirsty. 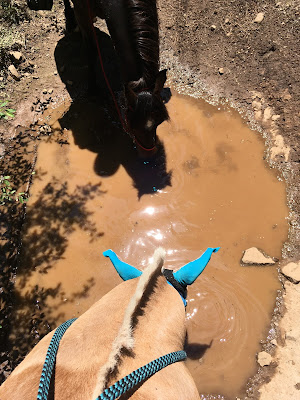 If you look at the map, you can see where the blue trail goes north then makes a sharp U-turn and heads south around the middle of the screenshot. When we got to this point, there was a well signed trail junction. Except this trail junction isn’t on my map. It’s not on my husband’s map. There’s just a sign pointing left or straight in the middle of nowhere. So we go straight and eventually that other trail merges back in with ours. At least we assume it’s the same trail. We just came across another marked trail junction on the left that isn’t on our maps.
Finally we got to the intersection with the Omega trail. At this point on the map, it’s a 4 way junction and we want to be on the blue trail so we should go left. Here’s a map with arrows to explain my thought process. We took the left most turn that we could. 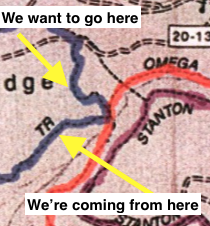 We came out onto a jeep trail and there are trail markers for both Omega Trail and Stanton Trail. Now, according to the map, Omega and Stanton don’t cross here. We seriously have no clue where we are. I have an internal compass and I knew where we were in relationship to the camp. I just didn’t know what trail I was on or which to take at any given turn. We started riding back along this jeep road. Worst case, I knew we could take this back a ways and then connect to a different jeep road to get to the campground. As we’re riding along, we come across a trail crossing and I hear voices. It’s a group of 7 riders also from the camp. We waited for them and I was planning to ask them if they know where we were and they’re asked me the same question. Because everyone was lost.
We got back on the blue trail and followed the group for a bit. Eugene was loosing his mind because there were other horses and he wants to go fast and this has never happened before. So we had to pull over and eat grass a few times to get separated. Finally we hit a Jeep road that we rode all the way back to camp. 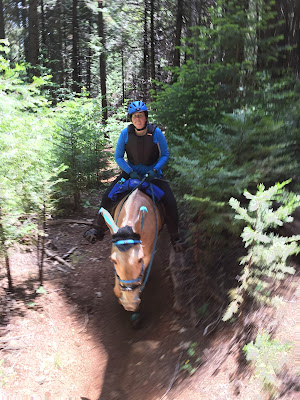 The trails there were beautiful with towering pines for shade and cool breezes. The footing was great. I know they run an endurance ride out of Skillman and it would be great since the trails would be marked. But I was not impressed with riding them without markings. I spent years as a kid and teenager doing Orienteering. I know how to read a map. I know how to use a compass (and I had one in my phone). And we had a real map in addition to this print out so it’s not like we wandered into the wilderness unprepared. But none of that will help you when the maps aren’t reliable and there are unmarked trails all over the place.
Back at camp, we groomed and watered the ponies and fed them their afternoon hay. Then we had our own lunch. At one point, I saw that Nilla was lying down. At first, when I saw her lying down, I had panicky thoughts of colic, but as I approached I could see that she was just resting and eating her hay. 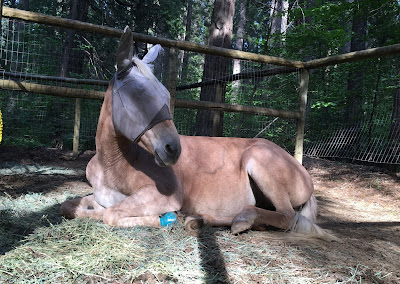 Apparently 13 miles of mostly walking was exhausting. She’s clearly not up for any actual endurance rides at this point. It was very cute though.

The campsite was nice and shady which made sitting around and relaxing fun, but did make trying to heat our solar shower rather difficult. The dogs were thrilled to have human laps to sit on. We had chicken burgers for dinner and then s’mores for dessert. 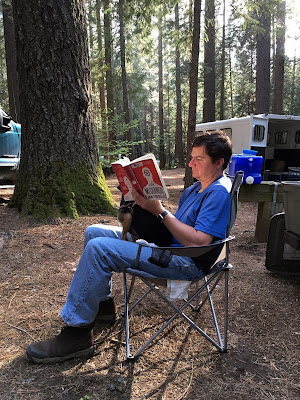 Since this is already pretty long, I’ll cover the next two days of camping in my next post.