Our Mustang adventure actually began on Tuesday when we had to remove all of the inside partitions in our trailer to make it look like a stock trailer to try to get it approved by the BLM. This was a bitch and a half since the center divider now has a full metal panel and weighs hundreds of pounds. We finally dragged everything out, took the trailer home, and took pictures the next day. The trailer was approved.

On Friday, we had to get up early so we could fill the truck up and fill the tires on the trailer. This ended up taking longer than I thought so we ended up getting a late start. Our first destination was actually Reno, NV home to the AERC Convention. It was theoretically 4:15 hours away, but we were towing a trailer and then we had to deal with snow going over Donner Pass. I was pretty much convinced we were going to die. And unlike the Donner party, it was not going to be slow and cold, but a fast and fiery death. I don’t like driving over Donner Pass with a trailer even when it’s not snowing. When it’s snowing and the visibility is shitty and the road is mushy and there are crazy-ass truckers going flying down steep grades, it’s even more terrifying unenjoyable.

We did survive and got to the AERC convention around 4:30, which was just in time to annoy some vendors who wanted to be off at the Tevis cocktail hour instead of showing us saddles. It was really cool to see and try some of the saddles I’ve been looking at online. I really want a Reactor Panel Saddle now. They just cost more than a horse. 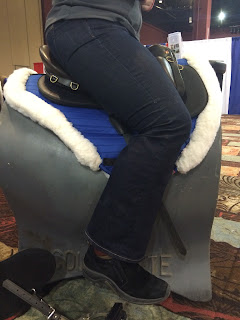 We checked out the used tack swap and I got a NWT crupper for 1/2 off. Sweet. We also browsed the other vendors and I really want a pair of the soon-to-be-released Ariat trail boots that The Distance Depot had demo models of. I forgot to grab a picture of them.

We grabbed dinner at the Casino and then started our journey to our hotel in Carson City. As we started down the highway, there were signs warning that the highway was closed in a few miles to trucks over 9 ft or anything towing a trailer because of high winds. We were able to take an alternate route for about 9 miles, but then were stuck with no way to go but back to Reno. So I called the hotel and was directed to take this small, winding road through Washoe Valley. The wind was seriously intense and thankfully we have a huge ass truck and made it in one piece.

In the morning we got Dunkin Donuts because bumblefuck Carson City apparently gets Dunkin Donuts, but not Silicon Valley. WTF. I might be overly bitter about this. Anyway… 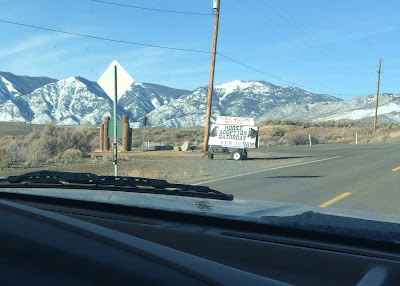 We drove to the prison and got checked in by security. There was a long line of cars and trailers in front and behind us. The auction was packed. There were a few hundred people there. Which is more than usual. The auction rules say no blue denim and not cell phones or camera. So I didn’t get a lot of pictures because I was trying to hide my phone. 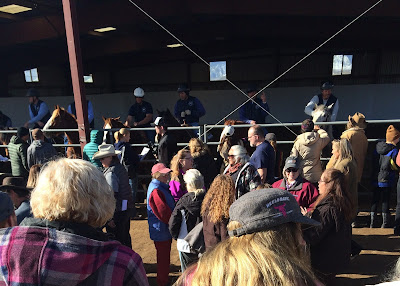 We turned in our application and got our bidding number. From 9-10 the prisoners are standing at the fence on the horses and you can go up, talk to them, ask them about the horses, and even ask them to demonstrate a skill. We started with the horses on our list. Johnny Cash and McFly were very cow-hocked so they were eliminated. Zephyr was listed in the catalogue as 15.2, but was actually only 14.1. He looked short in his video, which is why he didn’t make our top three, but we still though he might be different in person. His trainer said he’d sticked him and he was 14.1. He said the catalogue must have been a typo. Such a shame as he was adorable. Gunner looked great and was super friendly so he stayed on our list. It turns out O’Malley was actually supposed to be auctioned back in October but was lame from a bad trim job and got held back. So he’d had twice the training of the others. Jericho was confirmed as being more over-at-the-knee than I was comfortable with so he was also eliminated. Eugene had been on our list, but I hadn’t liked his video so he was pretty low on the list. He moved much better in person. We also liked Squirrel a lot so he was added to our list. 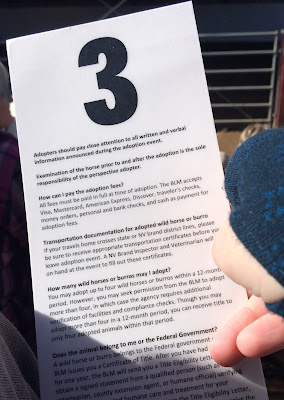 Before the auction, the prisoners all do a drill team exercise to the tune of “The Devil Went Down to Georgia” on the loudspeaker. The three lead horses carry flags and all the horses zip around each other. It’s awesome. Eugene was one of the flag carriers. His trainer told us in advance and before the performance we saw him go and get all the flags. He left Eugene standing untied, walked into the building, got the flags, came back and mounted while holding all of the flags. It’s questionable whether I could even do that with Dijon and I know either Shasta or Nilla would have given us the finger about it. After the drill exercise, the prisoners all stand in line and the National Anthem is played.

The head trainer did a speech and then a few other people spoke. I don’t remember who they all were. I know one was a woman talking about the new prisoner Mustang training program that’s been started in Sacramento. One of the others was from the BLM I think. Once that was done, the auction began.

The horses were sold in catalogue order so Gunner was first. I knew he’d go for a lot because of his color, but I was unprepared for the prices at this auction. He went for $5,100. And I think he could have gone for more as the winning bidder just held her card up the entire time. The other people would stop and whisper and think, but this woman wanted him. The head trainer said that was a record for the most money on the first horse.

I was a little blown away, but I thought he was a popular color so the next horse should be back to normal. The next horse was a chestnut. He was nice, but nothing fancy and not very tall. He went for $3,100. The average at most of these auctions is about $800-$1000. There are often a few horses that either don’t sell or go for the minimum bid of $150. This was not the average auction.

Our list after Gunner was Eugene, O’Malley, and Squirrel. The order was rather unfortunate as I would have liked to do O’Malley first and keep Eugene as a back up to him. But we went with what we had. And the bidding for Eugene was way more than I would have expected. He’s a nice horse, but I didn’t feel like he was that appealing to the majority of the bidders there (mostly ranchers and western riders). Part of what drew us to him was that his trainer said he’d make a great endurance horse. He actually told us that Eugene, Squirrel, and Johnny Cash were the best horses for that as they had the most energy and confidence on the trails. Well, it turns out the other person bidding against us also wanted him for endurance (I spoke to her afterwards). 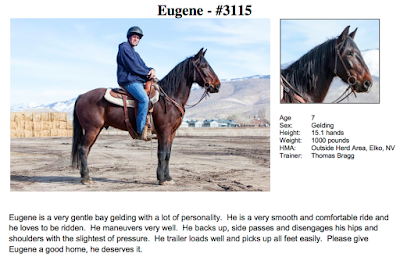 And that’s how we ended up spending a hell of a lot more than I thought we would on a green broke Mustang. And it wasn’t even one of the ones I thought we’d get. But really, I should have seen it coming: 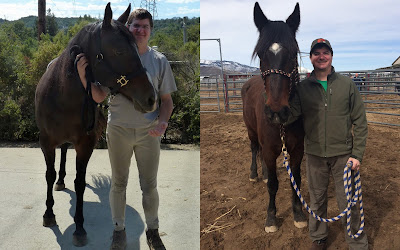 We showed his picture to one of the people at our barn and she said she sensed a theme.

My husband went off to pay and got a bag of goodies, all of Eugene’s paperwork, and a hat. Then he went over to talk to the trainer some more. 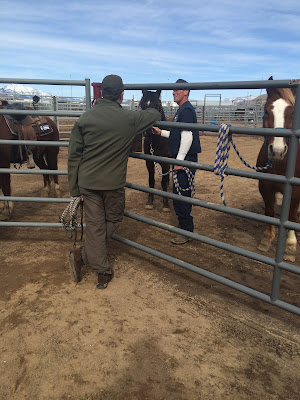 We had to wait for the end of the auction to load up and I was really enjoying watching it anyway. Some of the trainers did tricks like standing on their horse’s backs or roping off of them. One trainer had his horse stand on a raised platform and then climbed beneath his belly. Another trainer did a handstand on top of his horse. It was really fun to watch. 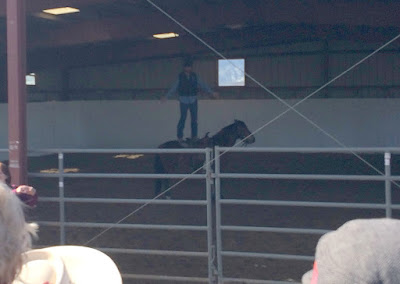 The bidding was pretty crazy. The cheapest horse went for $850 and the most expensive went for $6000. The average price was $2600, which is about what the high bid normally is. This was a very successful auction for the program. 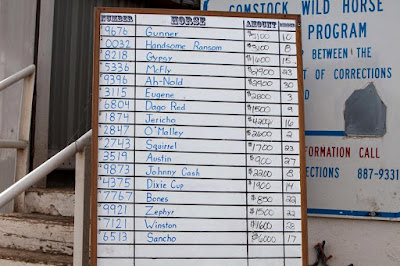 Once the auction was over, we had to wait a bit for other people who got their trailers lined up before us. While they were loading up, my husband spent some time with Eugene and his trainer learning more about him. 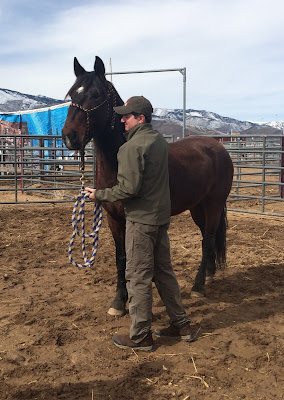 By the time we got loaded up (around 12:30) and headed out, it was almost 1pm. The GPS said 4:45 to the trainer’s barn, but it thought we were in a car and could drive through Tahoe. Hell no. We were sticking to highways and even if we wanted to drive through the Sierras on winding roads, it would have taken us so much longer to navigate those turns.  So we drove back through Reno. With the extra miles, stopping at border control,
and the whole going slower with a trailer thing, we didn’t arrive at the trainers until after 7pm. Poor Eugene had been on the trailer for close to 7 hours, it was pitch black out, he didn’t know us, and was understandably quite upset. I didn’t blame him. He was very snorty and concerned, but he unloaded without freaking out and walked in the dark by headlamp with the trainer and my husband to his pen where food and watered waited.

He’ll have a few weeks with just the trainer working with him before my husband starts lessons though we plan to visit next weekend to see how he’s doing and try some saddles out. I don’t know how this will go, but I hope it works out. My husband and I really enjoyed the auction and we may go to the Sacramento one coming up just to see it. I would highly recommend the Carson City auction even for someone not looking for a horse. It was a really cool experience. 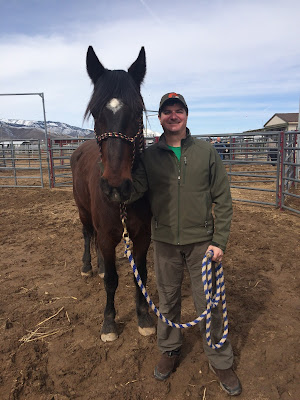