At the end of July, Nilla was diagnosed with a minor suspensory tear. The tear is very small, on only the lateral part of the suspensory, and below the branch. All those things make for a very good prognosis. Provided healing goes well, she should actually be able to return to regular work. She didn’t need stall rest and was allowed to be on pasture rest with hand walking. The vet originally wanted to see her again after 60 days, but there was no way she was going to be healed at that point and I didn’t want to waste tons of money and time taking her in just to be told she was doing well and needed more time. I suppose he could also have told me she was doing badly and we needed to change up the plan, but she never seemed to be getting worse. My initial plan was to wait 6+ months before taking her back in, but then I had to take Levi in and figured I’d combine the trailer trip.

I have to say I’ve been pretty bad at the whole suspensory care thing. I was supposed to take her on her 15-30 minute walks every day, apply Surpass every day, apply the ultrasound device daily. I did this for the first few weeks, then it got to be too much and I just turned her loose in her pasture and ignored her. She got fed and pet and – after my farrier yelled at me for letting her get thrush – I picked her hooves and sprayed them regularly, but for the most part she was ignored. She got lots of movement in her pasture and was pretty happy. 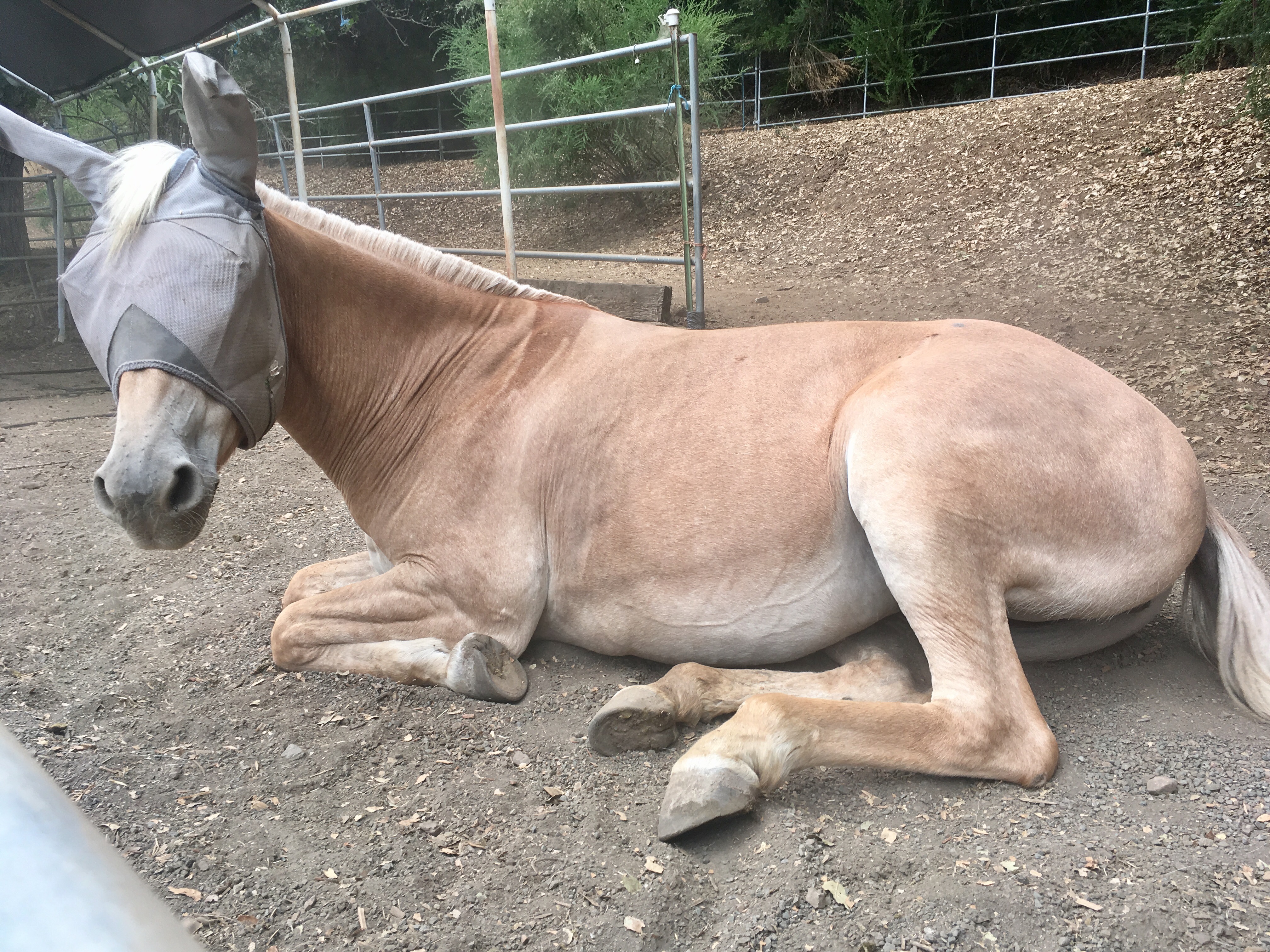 At the vet hospital, Nilla got poked and prodded and trotted a bit. She was still very slightly off, but the vet noted that she was now willing to drop the fetlock on the bad leg which she had been keeping it as stiff as possible last time. She was perky and full of energy and marched around when they let her trot.

She was sedated (by which I mean she was slightly sleepy and just tolerated the ultrasound because it wasn’t that bothersome) and the vet got some good images. Her suspensory is looking so much better. The size is down from 45mm to 35mm. I totally forgot to ask the vet what size it’s supposed to be, but he assured me that the reduction was excellent and he was very impressed with how well she was doing. 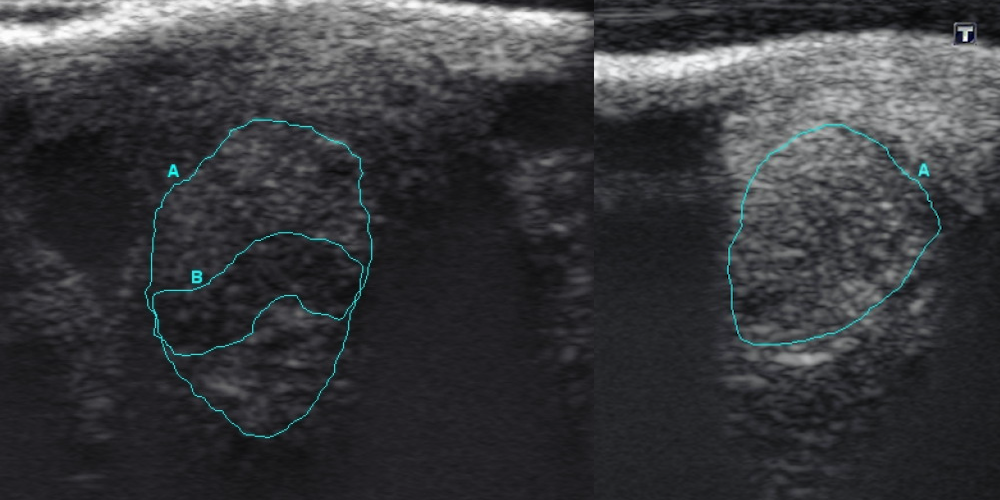 You can also see from the image above just how much the tear (the dark discoloration in the left ultrasound) has dissipated. It’s almost gone. The general swelling of tissue surrounding the suspensory is also way down: 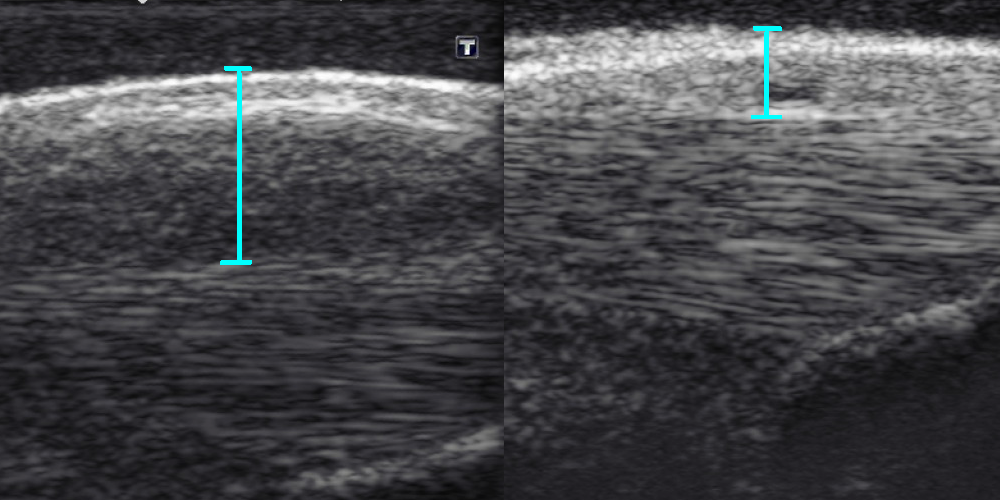 The pattern of the suspensory fibers is also much more even and consistent now. The vet was impressed enough to authorize her to begin rehab. She’s supposed to be ridden for 30-45 minutes with ten 30 second trot reps interspersed. We get to up the duration of the reps by 30 seconds every 4-5 weeks depending on how much she actually gets ridden. If weather or anything else keeps her from getting out 4-5 times a week, then I’m not supposed to up her time. The real problem we’ll face is footing. She can’t go in our arena because the footing is too deep, but the fire road/trail I can trot back and forth on gets slick if it rains.

The other problem we’re going to face is attitude. When I got back from our holiday trip to the east, I tacked Nilla up for her first ride and she was lit. Nilla has a lot of energy and is a very forward ride, but she’s always seemed pretty content to be a pasture pet so I was surprised when she literally dragged me over to the mounting block. A few years ago I got tired of Nilla walking off when I was mounting and taught her to stand for a treat. She took to that like a crack addict and we’ve been good ever since. Well, she remembered and she wanted her treat. 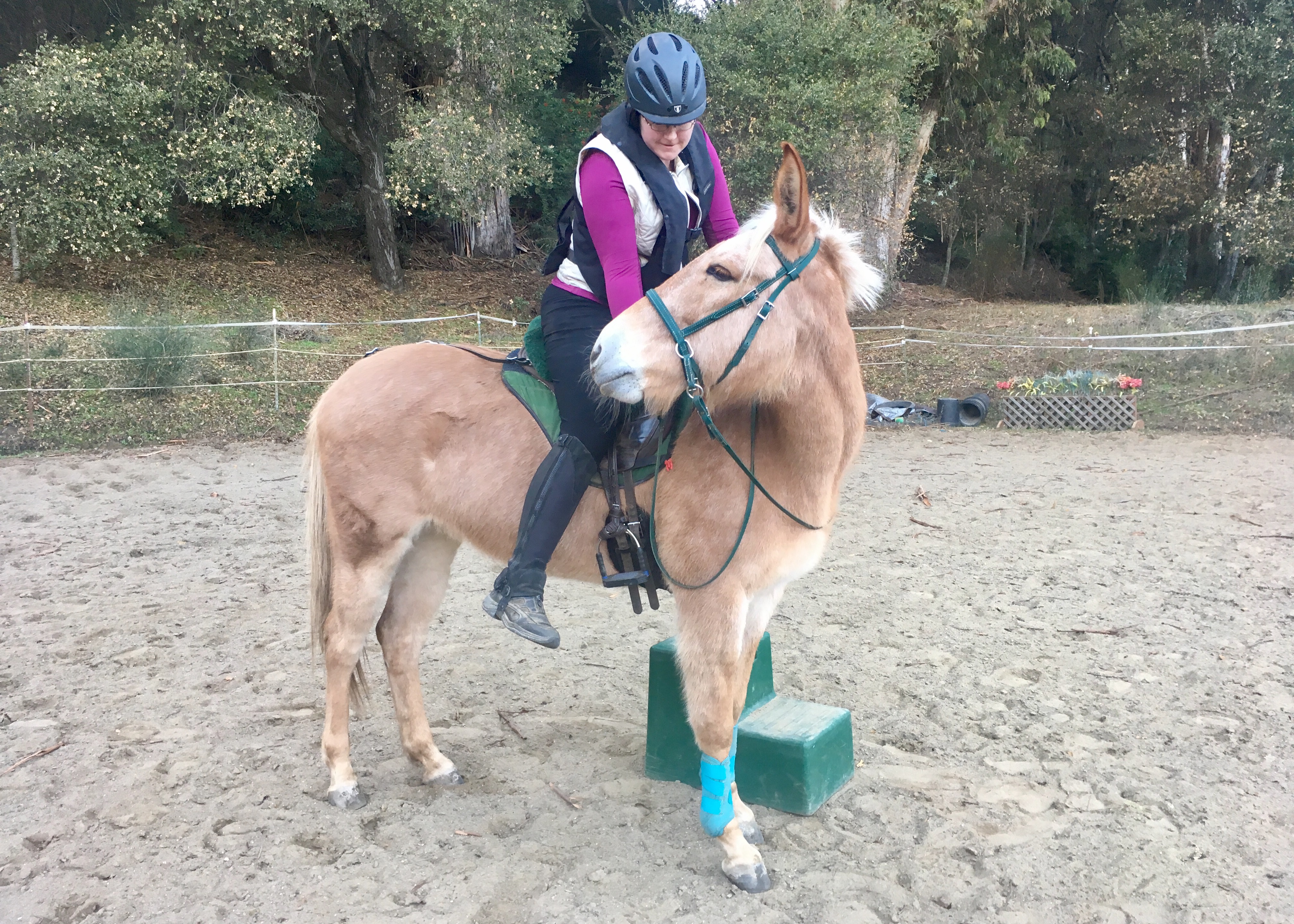 She then proceeded to try to trot up the hill (not allowed) and generally let it be known that she did not care for my input on what we should be doing. We left the arena and starting walking and trotting back and forth along the fire road. She was exploding into trot and dragging me down the trail. After a few laps, I asked her to turn around at a different spot and she was pissed: head down, shaking it side to side, and pinning her ears. Another lap or so later we were walking past the turn off for the arena (where she could see Eugene) and she took advantage of the loose reins (we were walking) to rear and try to bolt down the hill. B*tch!

She also lost her bitless bridle privileges. I rode her again on Sunday and used her hackamore. She had a few moments of attitude, but I was better able to control her and I was also expecting them more. I think I’m going to switch to using her dressage saddle and bridle. Might as well do some work on rebuilding her decimated topline while we’re walking.