If you follow me on Instagram, you’ve seen the little quilted ponies I’ve been making. I picked up the pattern because it was cute and I thought I might try making them on commission. I started with making one for Dijon’s owner because I owed her a favor and thought she’d get a kick out of having a little stuffed Dijon. She loved it and so did everyone else. 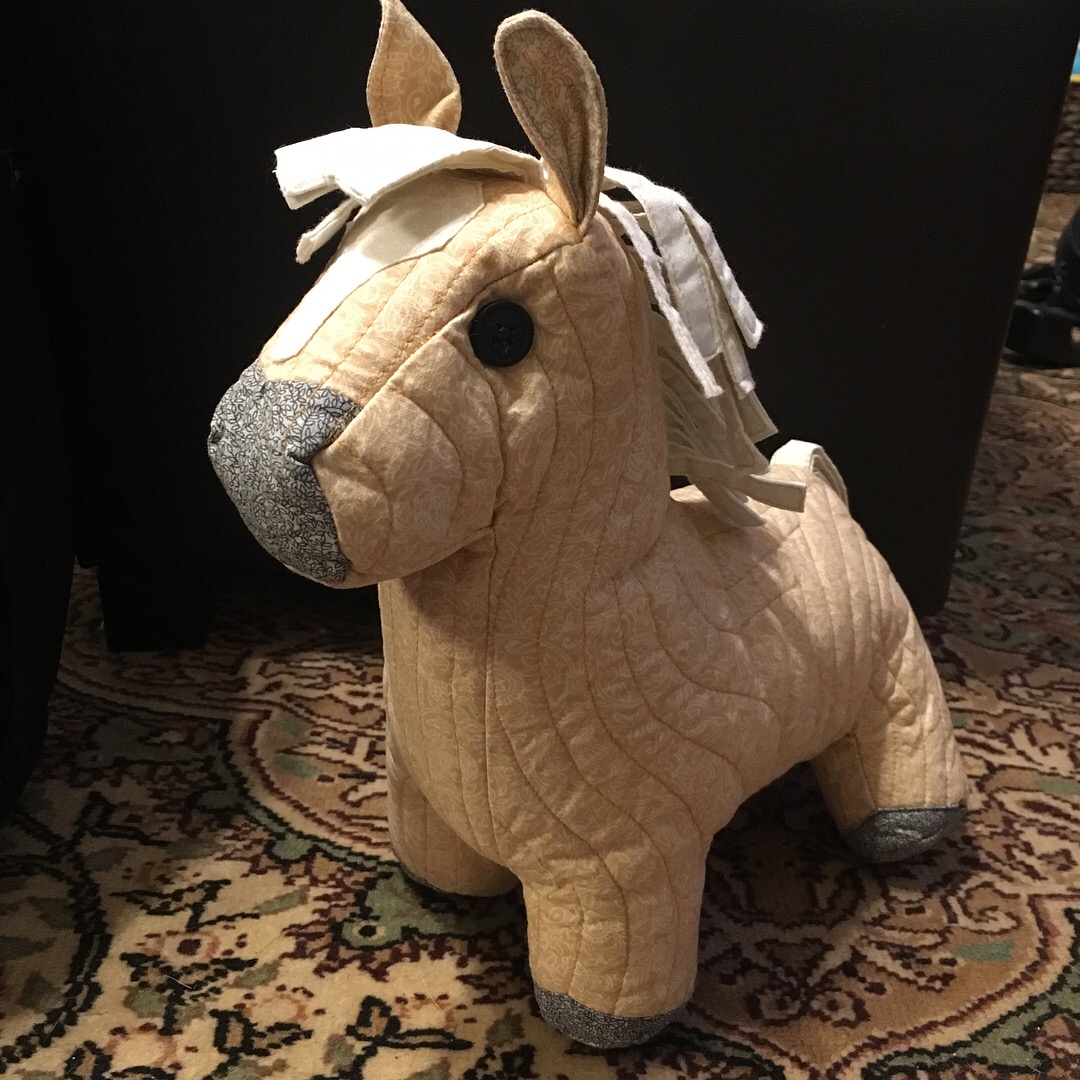 It’s pretty ridiculously cute. I wasn’t actually anticipating it coming out as well as it did, but as soon as I finished it, I knew I needed to make one for myself. A lot of followers on Instagram and Facebook were asking if I was going to sell them. Well… that was my initial thought on trying out the pattern, the process turned out to be a pretty time intense. It ended up taking me about 20 hours to make that first horse. At that rate, I figured I’d need to sell them for about $800 to make it worth my time. So, yeah…

A lot of my time on the first horse was spent on pouring over the directions, which are very detailed, but this is not what I would call an “easy” project. I did some quilting as a kid, but haven’t done a lot recently and my machine sewing skills are somewhere in the intermediate area. The directions walk you through the project step-by-step, which is awesome, but I spent a lot of time going back and forth from ironing, cutting and pinning to sewing. I also had to change out my thread colors a bunch. For the second horse, I didn’t need to read each direction multiple times and I did all the ironing, cutting and pinning in one batch before moving on to do all of the quilting in one batch before finally starting to combine the pieces. 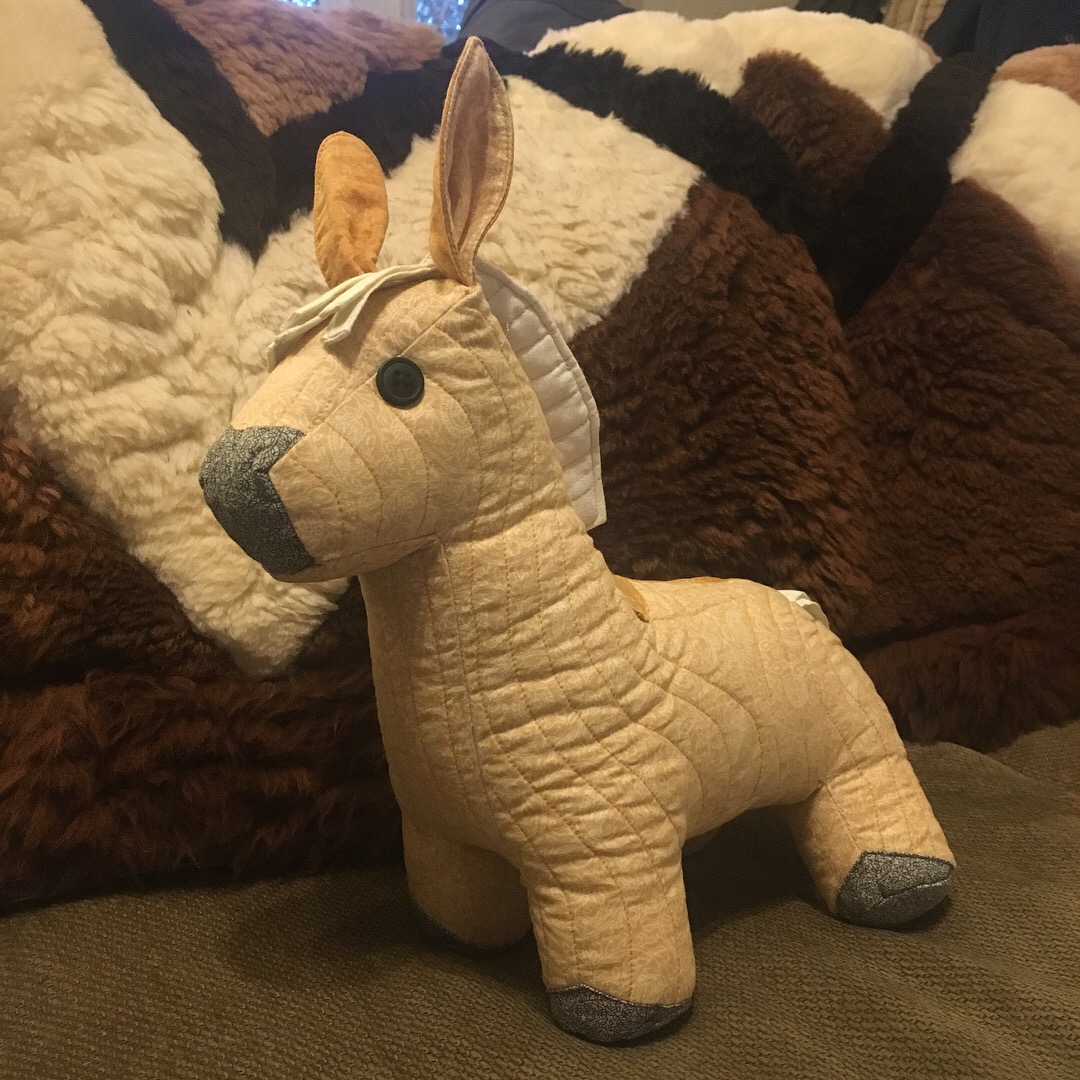 For the second quilted pony, I did have to modify the pattern to make it into a mule. I added a mohawk, enlarged the ears, and added her shoulder and back striping. This wasn’t too hard, but it did slow me down a little bit.  All in all, the second one took me a little over 10 hours. To be fair, these weren’t 10 straight hours completely focused on sewing. I definitely looked up occasionally to watch the TV that’s playing in the background – I haven’t entirely memorized Psych yet – or go get a drink, let the dogs out, etc. Even without distractions, it wouldn’t be a quick turn project. 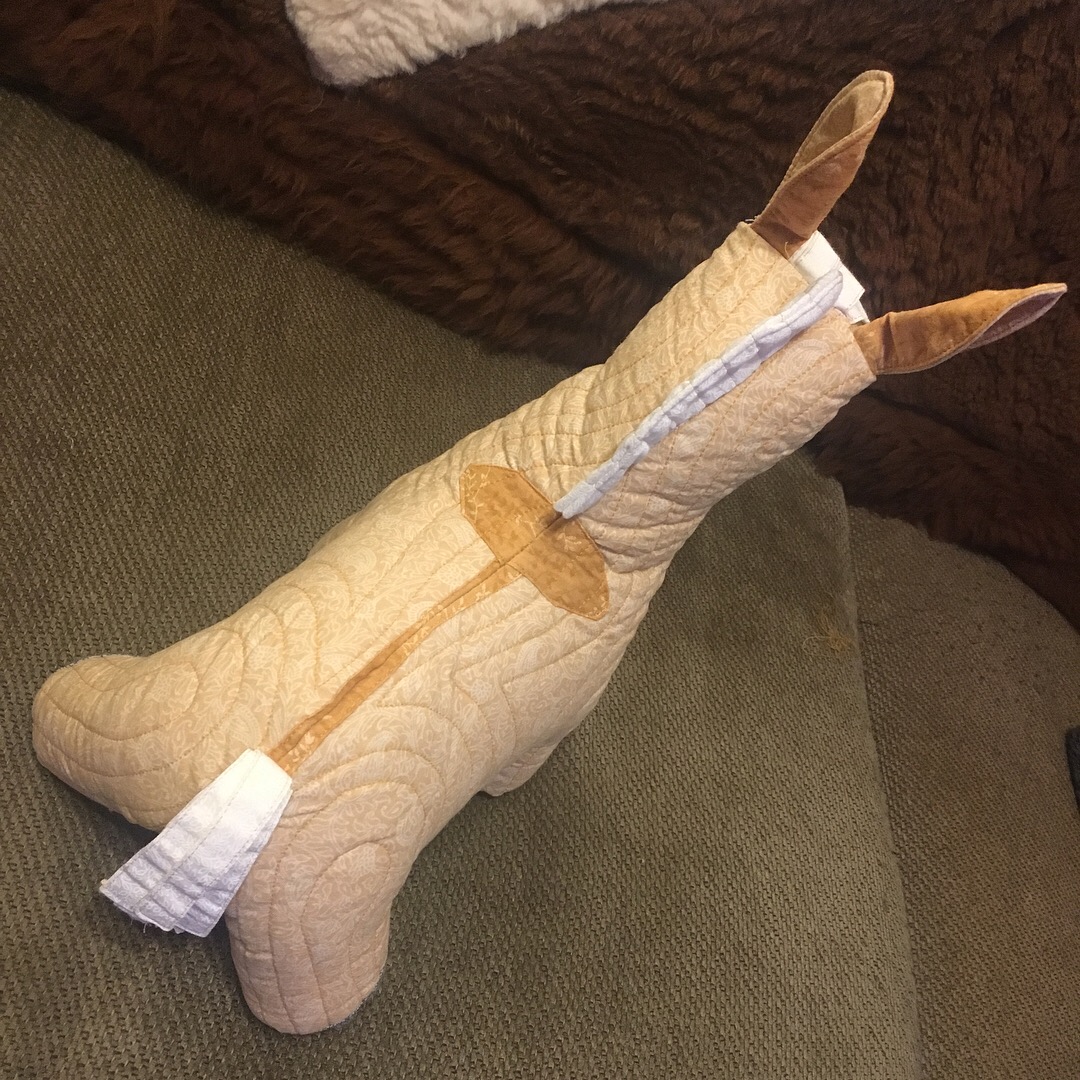 At this point, I was pretty addicted to making quilted ponies. It’s not like I don’t have other things I should be doing – like paid work – but I just want to sew ponies instead. I debated doing a fun one, like a galaxy pattern or a cute kids fabric, but decided to make a Eugene instead. 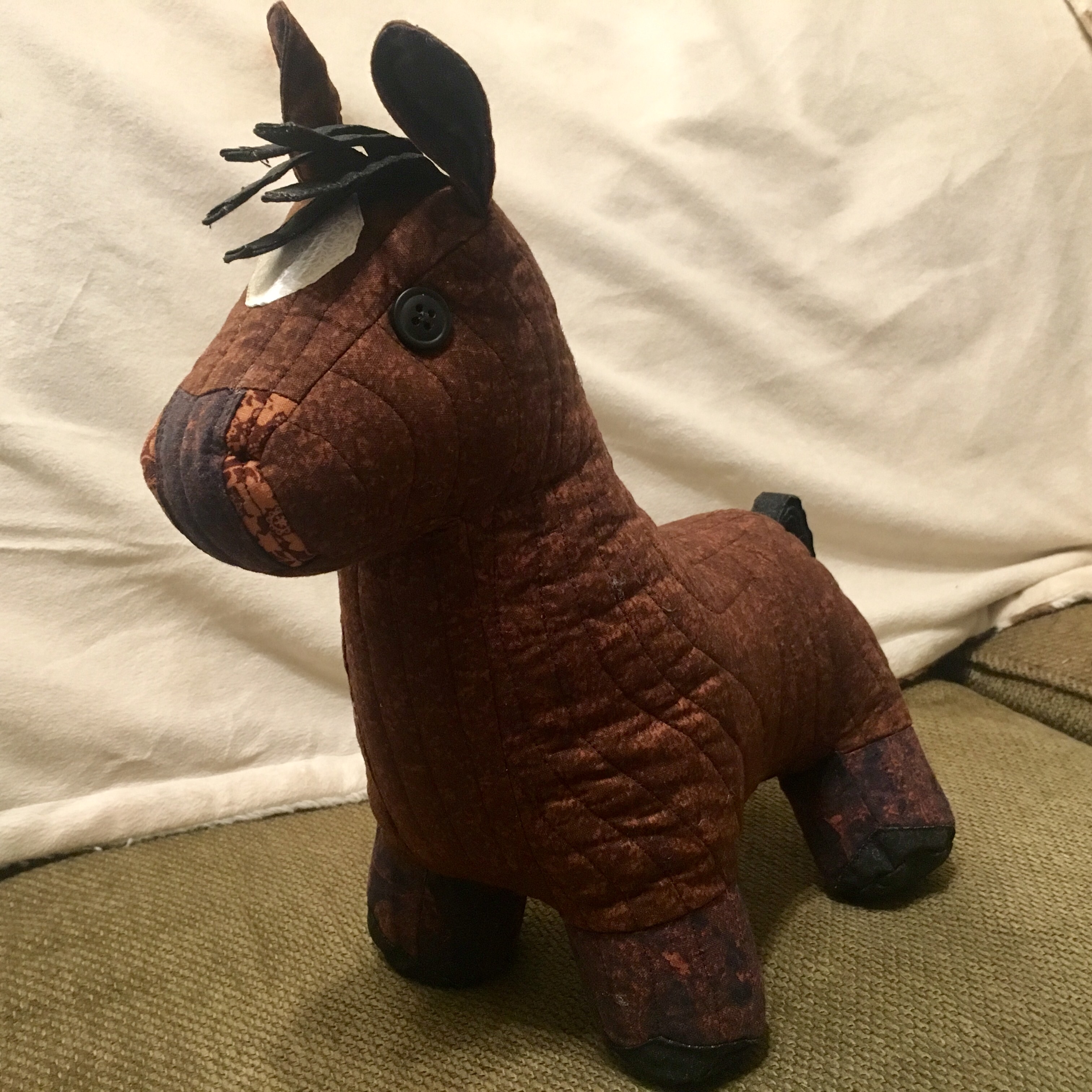 I didn’t time myself for this last one. I didn’t take me as long as the Nilla, but it wasn’t fast either. I once again had to spend some time figuring out how to make modifications, like adding the coronet band and darker legs. I also spent an annoyingly long amount of time hand embroidering his brand because I don’t own an embroidery machine… yet. 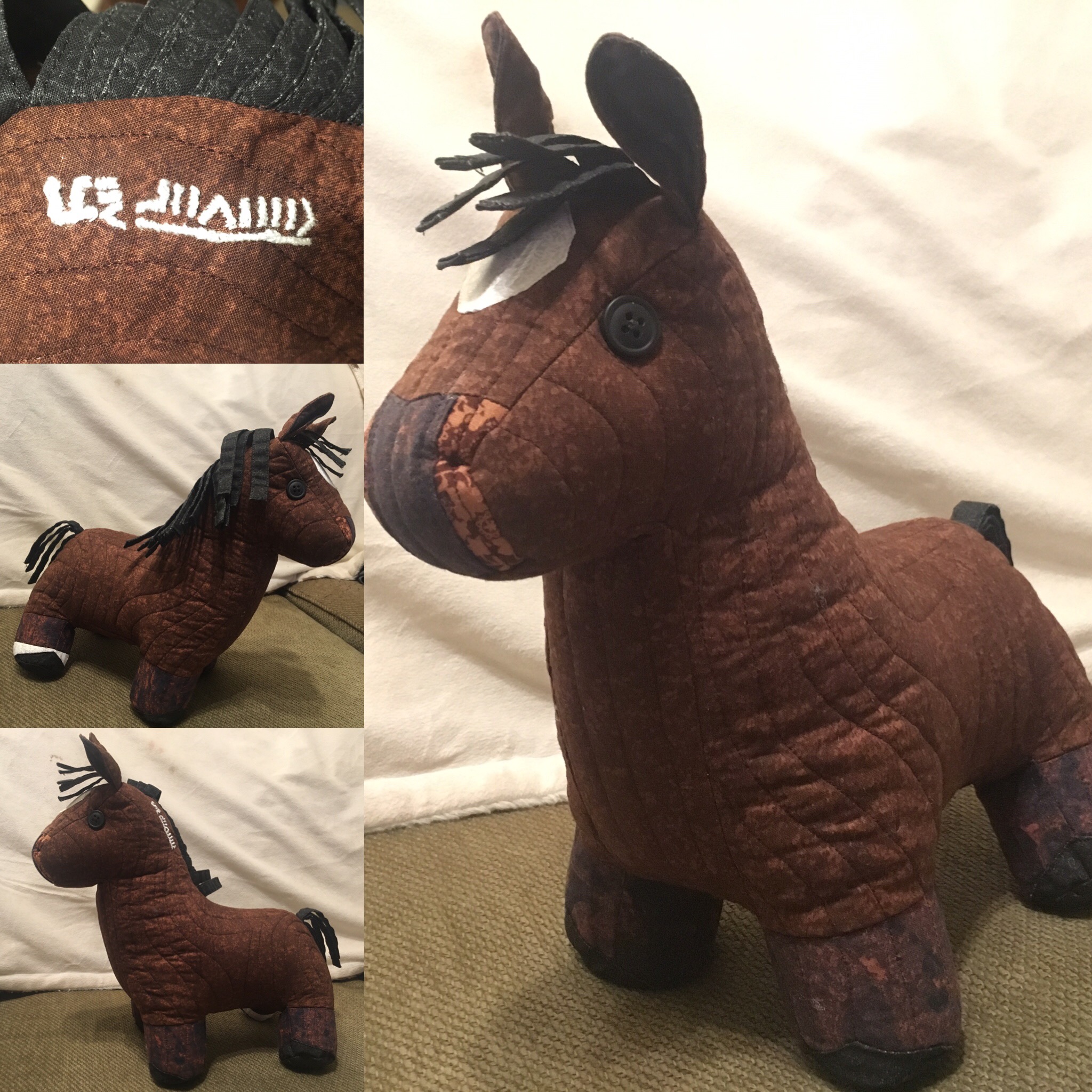 In the end, I don’t think I could make these and sell them for less than $200. If you’re interested in one, let me know. I’ll probably make some more for fun no matter what. If you’re interested in making your own, the pattern is from RumpledQuiltskins who sells the pattern on her Etsy store. She also has a bunch of cute patterns aside from the horse like a lion, cow, and pig. I reached out to her and asked if she’d like to share a coupon code for readers and she generously created one for 25% off. To get 25% off the pattern use: RQS2018 at the link above. 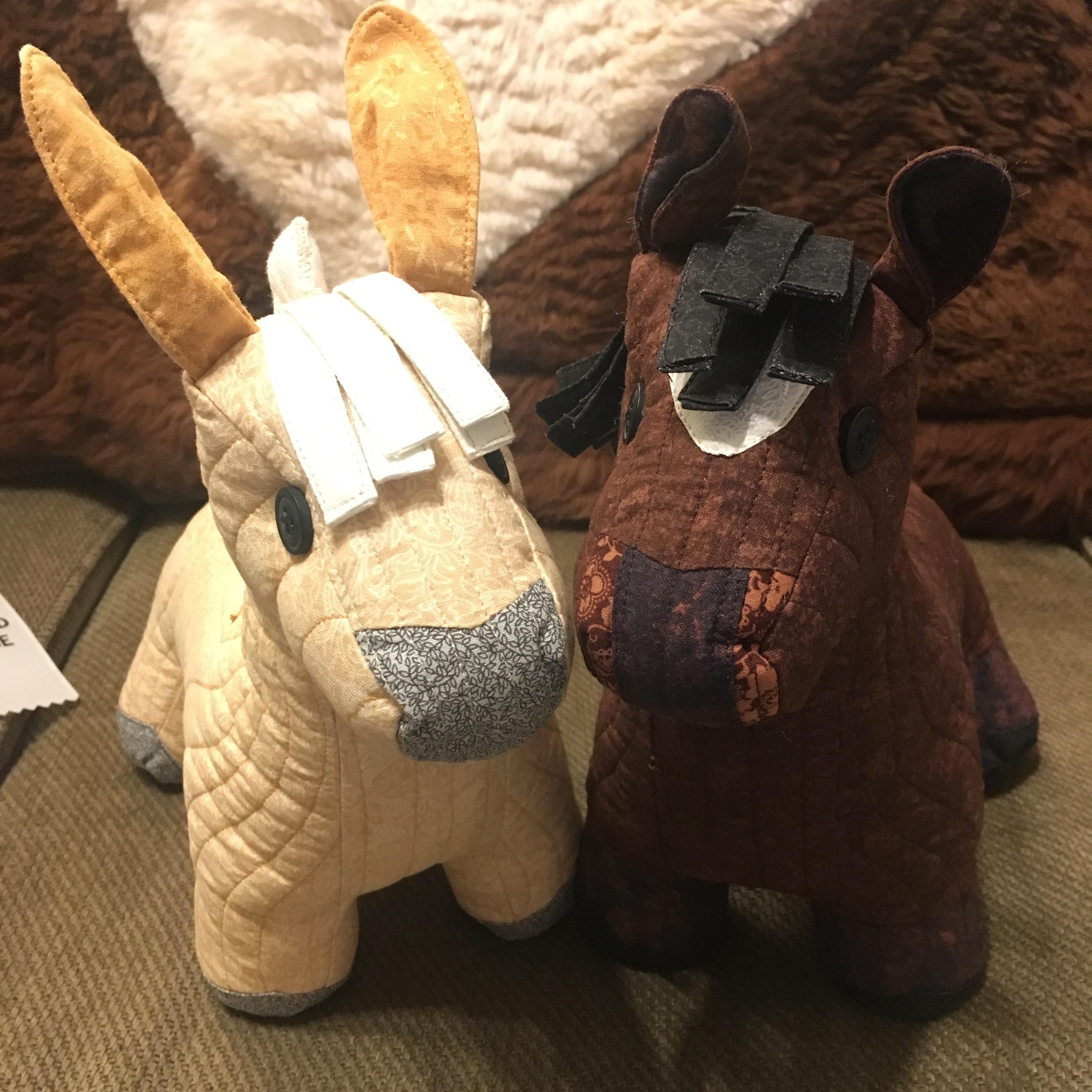 You know you wanna make one…

As always, this isn’t a sponsored post and there are no affiliate links. I didn’t receive anything in exchange for writing this post or sharing the coupon code. I am sharing the pattern because I really like it and I asked RumpledQuiltskins if she’d like to offer a coupon code because a lot of people have asked for the pattern. Enjoy!