So, I already complained about this show, but I figured I should still do a recap because I like being able to look back on this blog and see what I’ve done and if any progress has been made.

We actually talked to the two college girls into coming to this show and they convinced one of the other boarders to trailer them over so it was like a group outing. My husband did the Short Stirrup/Rusty Stirrup division with Eugene. This was Pleasure, Hunter Under Saddle, Equitation, Hunter Hack, and Hunter over fences 1’6″. The flat classes were the first three classes of the show so we got there a little early to register, but we figured the class itself would be warm-up so we didn’t get there too early. 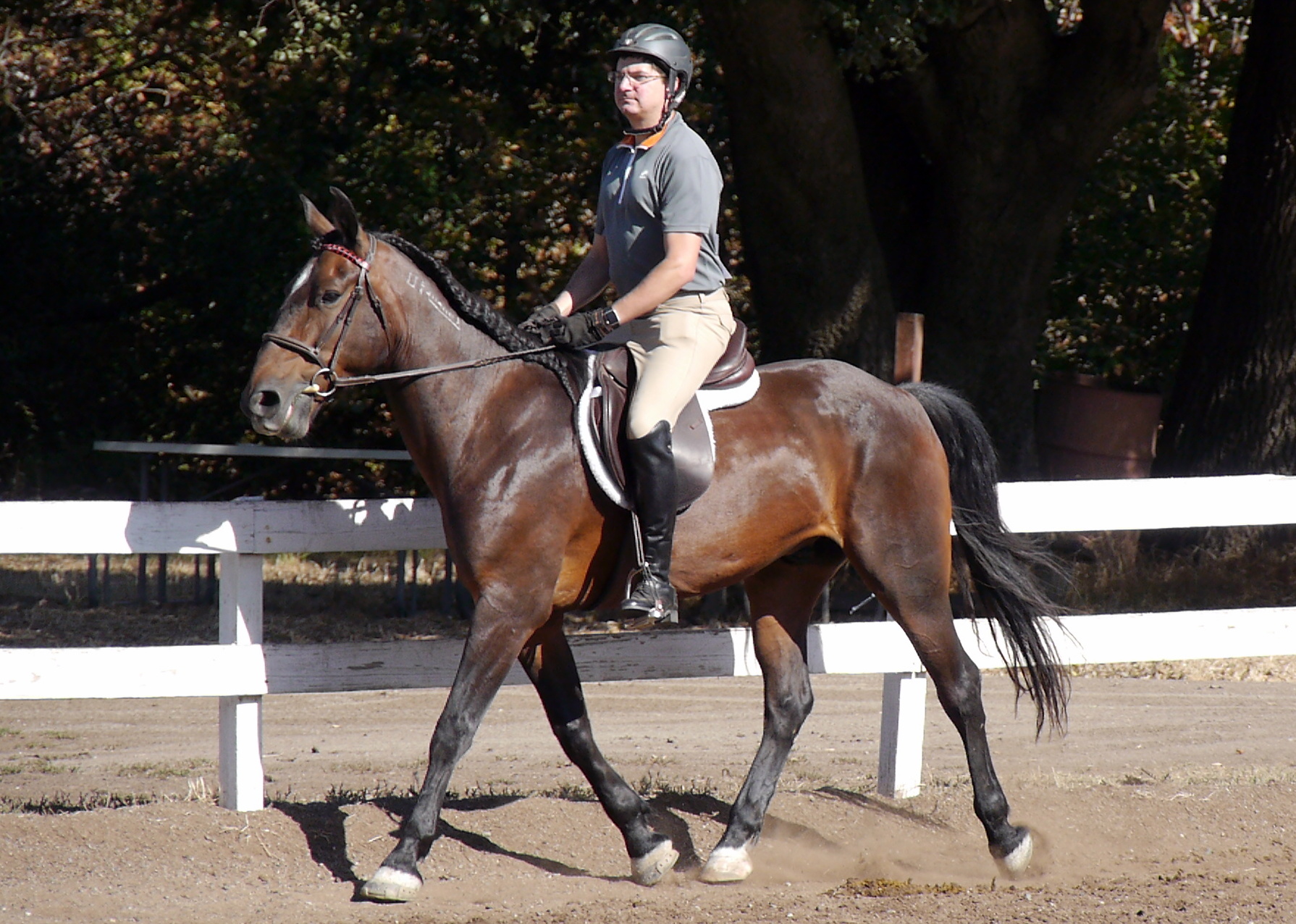 I had originally tied Nilla to the fence near the arena. Apparently it was okay for other horses to be tied there, but the mule was terrifying and I had to move her. Seriously, I should have just scratched and gone home at that point. But c’est la vie. 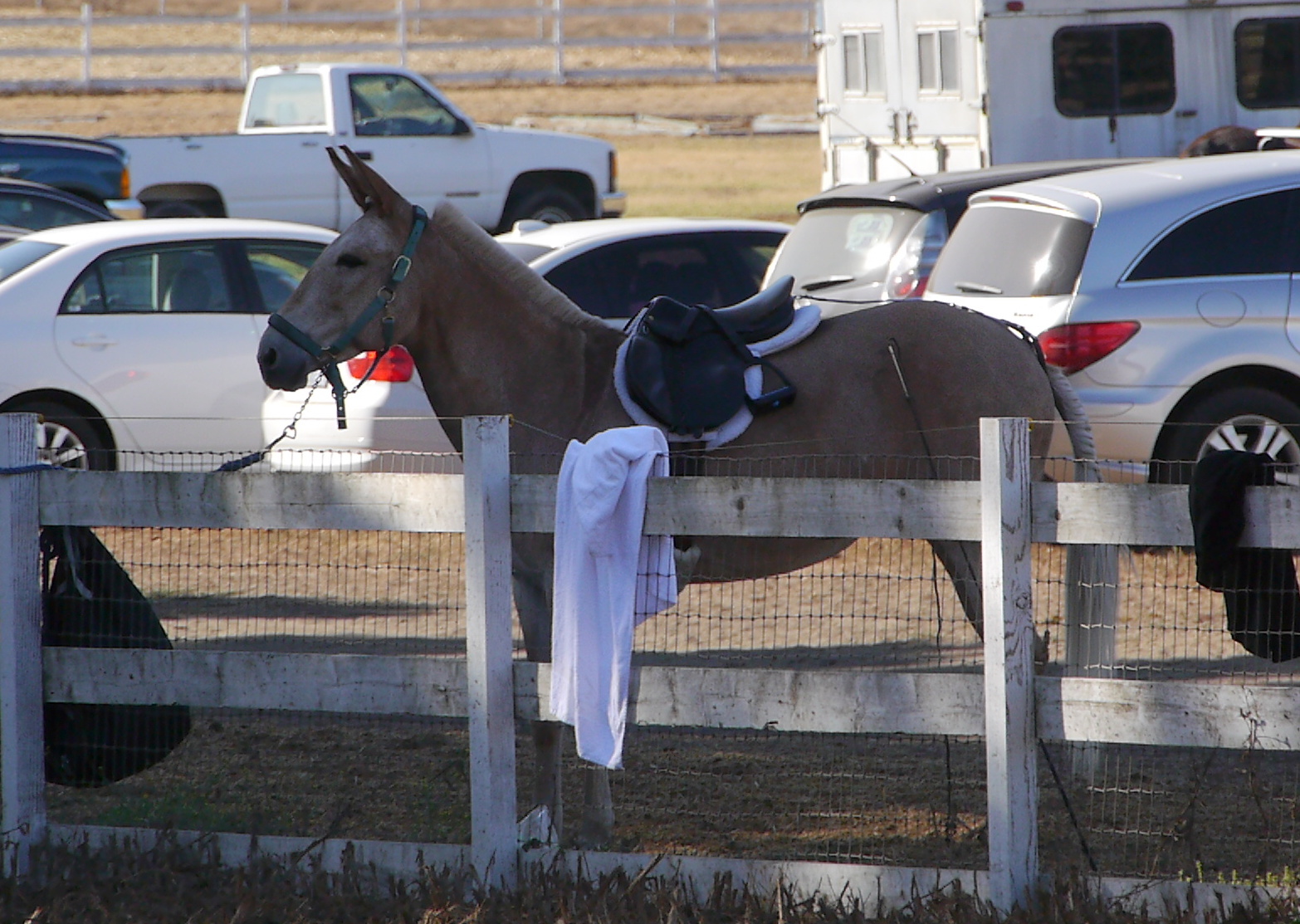 Anyway, my husband got 6th in the pleasure (out of 8) but they were only doing ribbons to 5th. The organizers were actually having an argument about announcing to 6th and stopped doing that after this class, so that’s the only one we knew placing for. 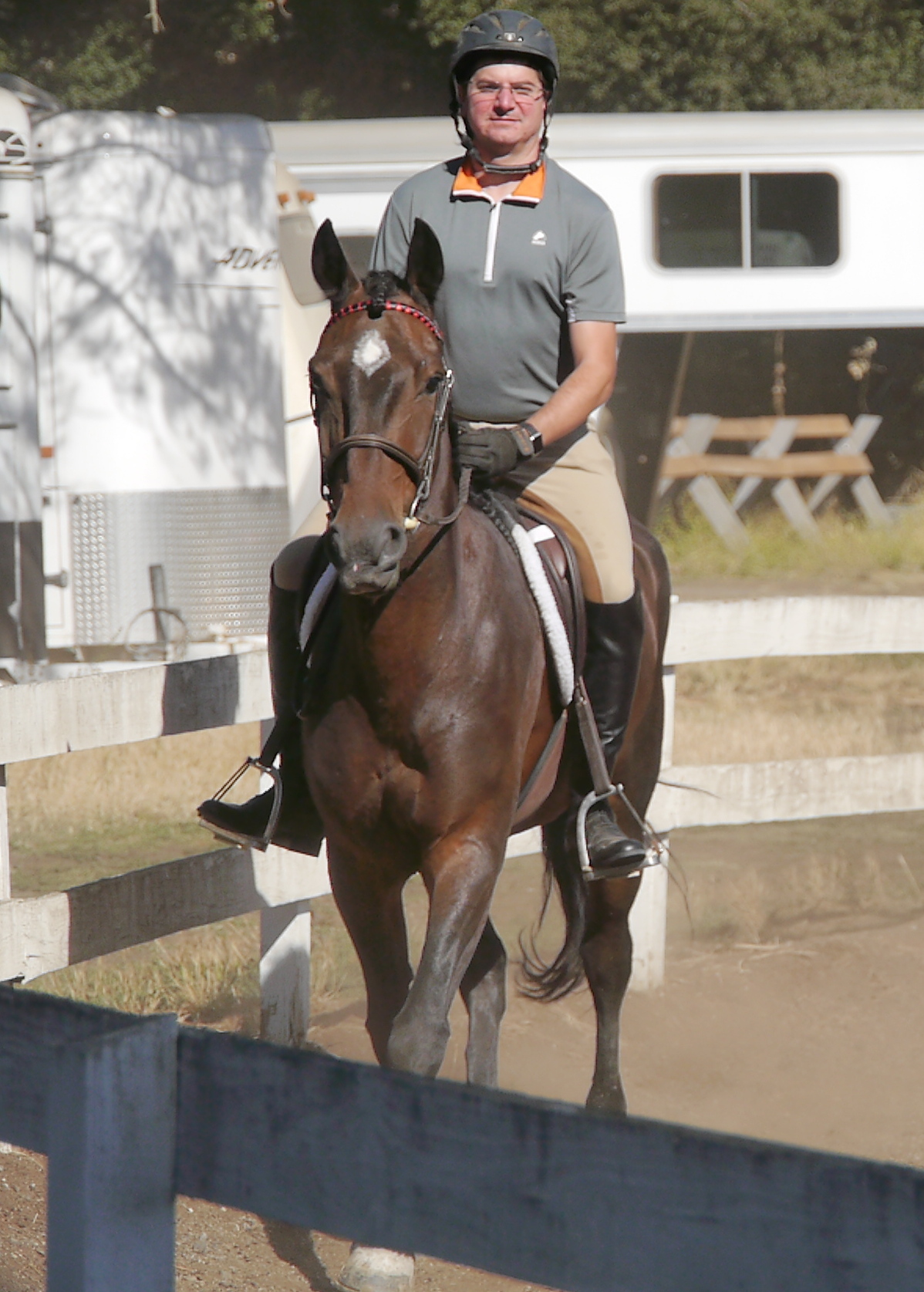 I braided Eugene for the show and he looked super cute, but he does like to keep his head in the air like a giraffe so no real expectations for winning hunter classes. At LAHHA, Eugene got a bit too excited being in the ring with so many other horses. At this show, he was much better, so for the purposes of helping Eugene get used to busy arenas, this show was a success.

I did the Beginner Division, which had a ton of entries. The Pleasure had 12, then people kept joining and I think the Equitation ended with 14 or 15. They actually started having the Pleasure class enter the ring and line up along the fence while they were doing the ribbons for the previous class to keep things moving. However, a few people objected to Nilla, so the ring steward asked if I would mind standing over to the other side. Sigh, no, I don’t mind. But really, people need to STFU. 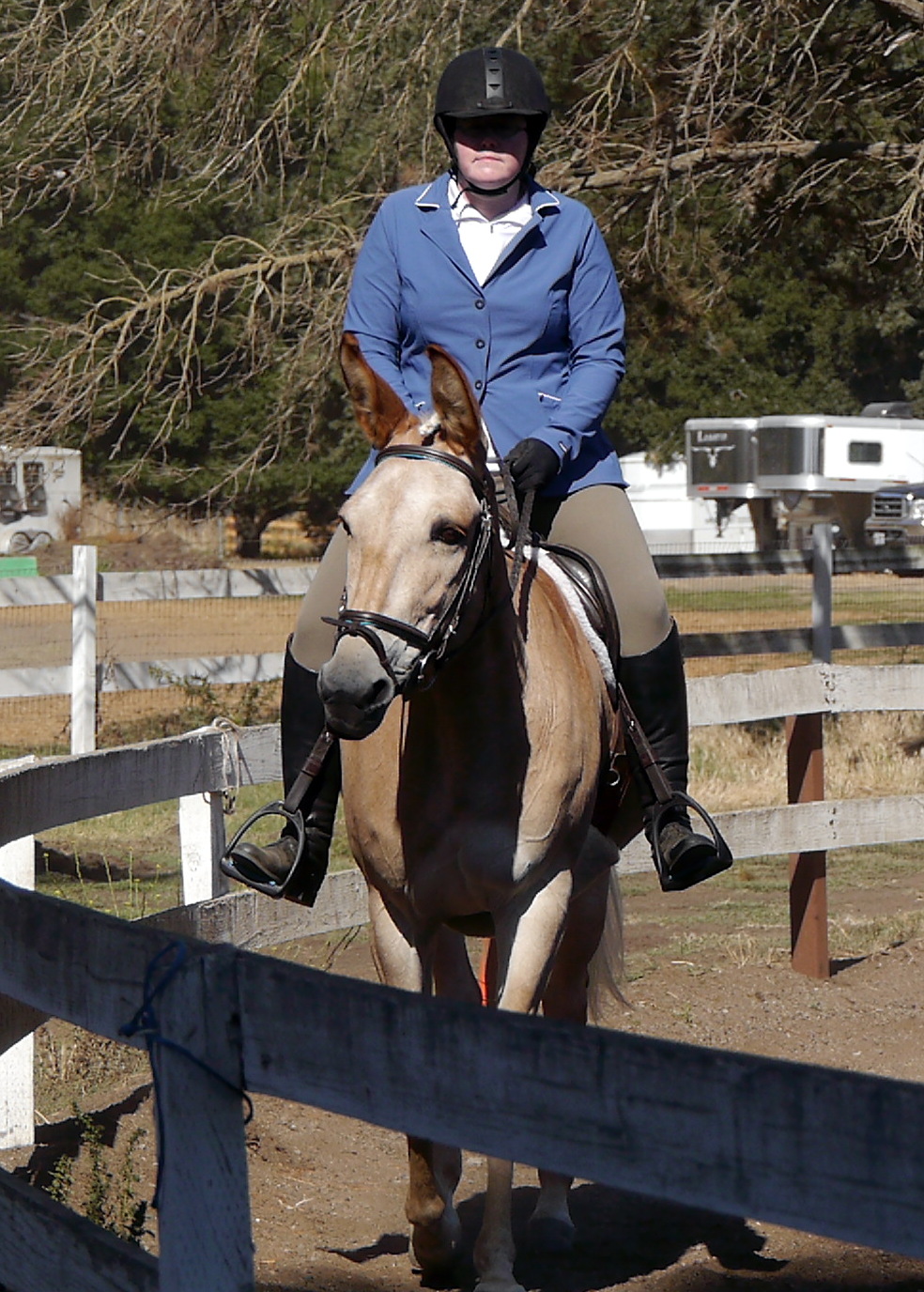 This class was something of a disaster. There were several horses bugging out about various things. They first tried splitting the group for canter to the left and then for canter to the right they must have decided it was taking to long to split and tried having us all canter at once. Multiple horses started bucking, flying sideways, or spinning. We literally cantered for three strides before the judge called for walk. The scary mule was lovely though. Even when a horse bolted past her at the canter. 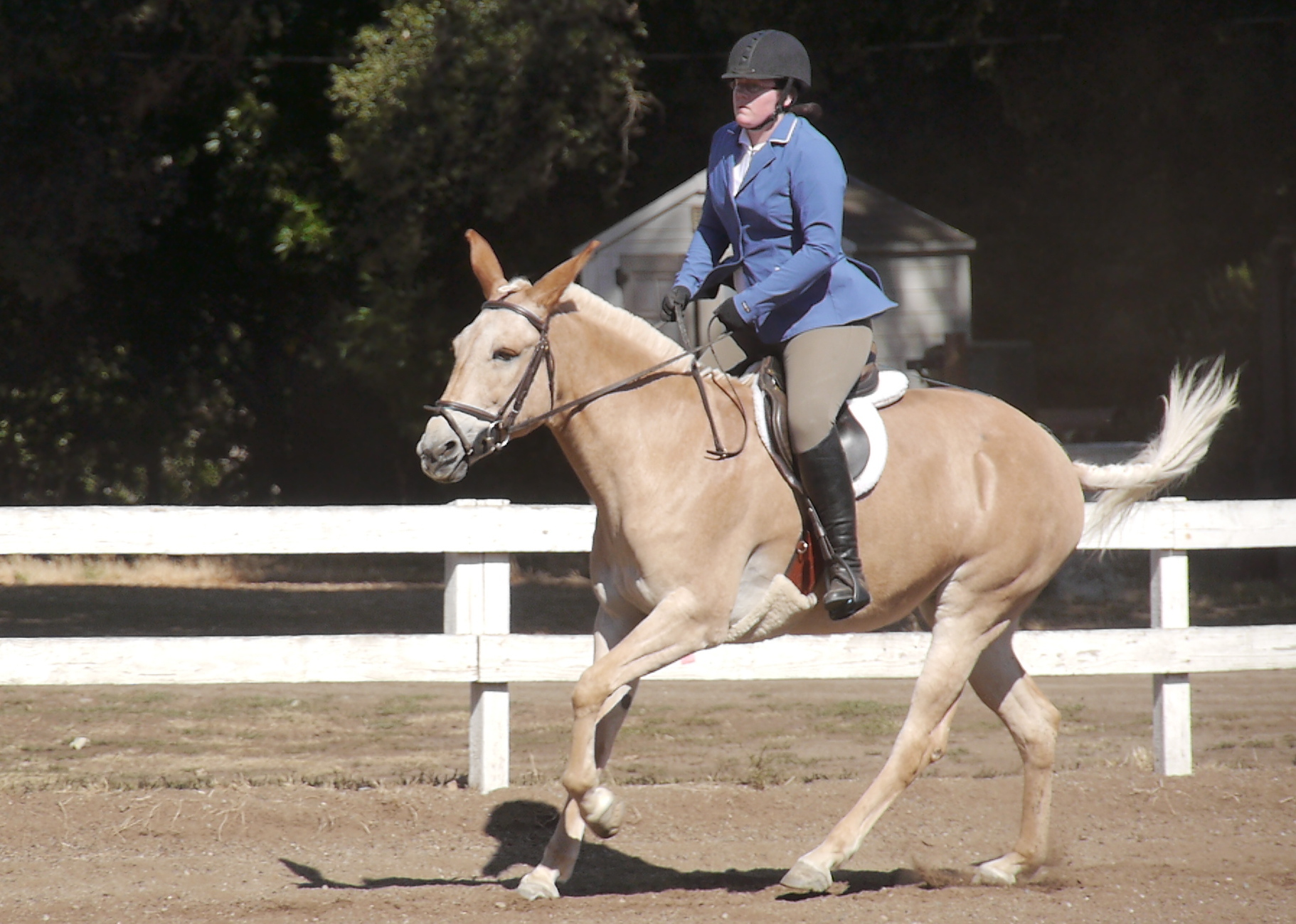 At the end of pleasure the judge came over to tell me that flash bands aren’t legal. And I asked if I should take it off and she said, no, it’s a schooling show so you can keep it. Okay then. Well, thanks for the chat?

Despite how terribly the whole everyone cantering together went, they did the same for the next two classes. The mule continued to be very good. Other horses continued to freak out. One of the other riders in my class actually had to yell at a kid for running up his horse’s ass. I don’t blame him. It was pretty scary behavior. Especially for people on less chill horses. I was thankful that Nilla doesn’t care about shenanigans. Lizards, yes. Insane behavior, no. 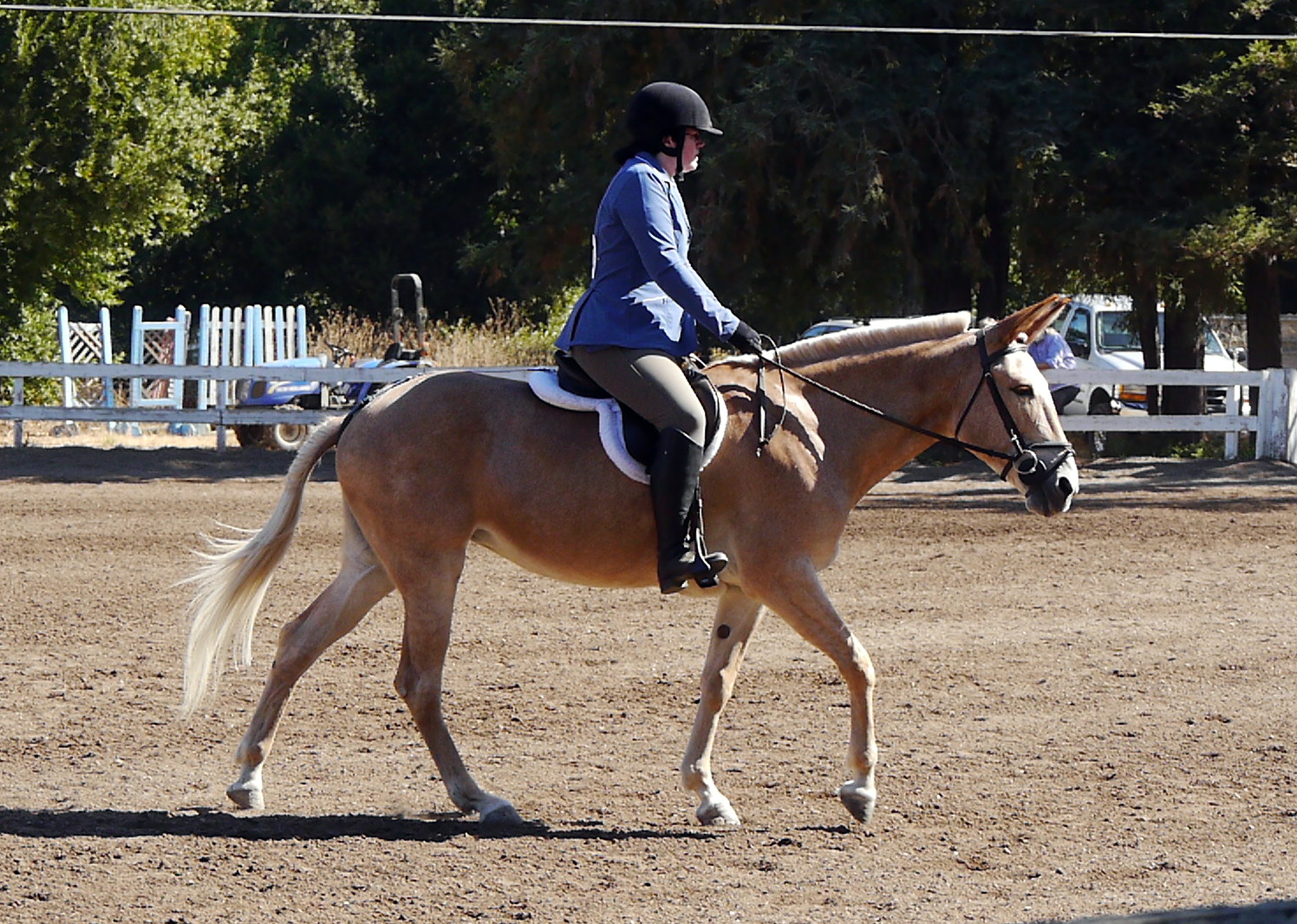 We had a little break before Hunter Hack. I thought that my Hunter Hack was after lunch so I stripped tack, but then realized it was before lunch and tacked back up. So fun. We hung out under the shade waiting for the class to start. 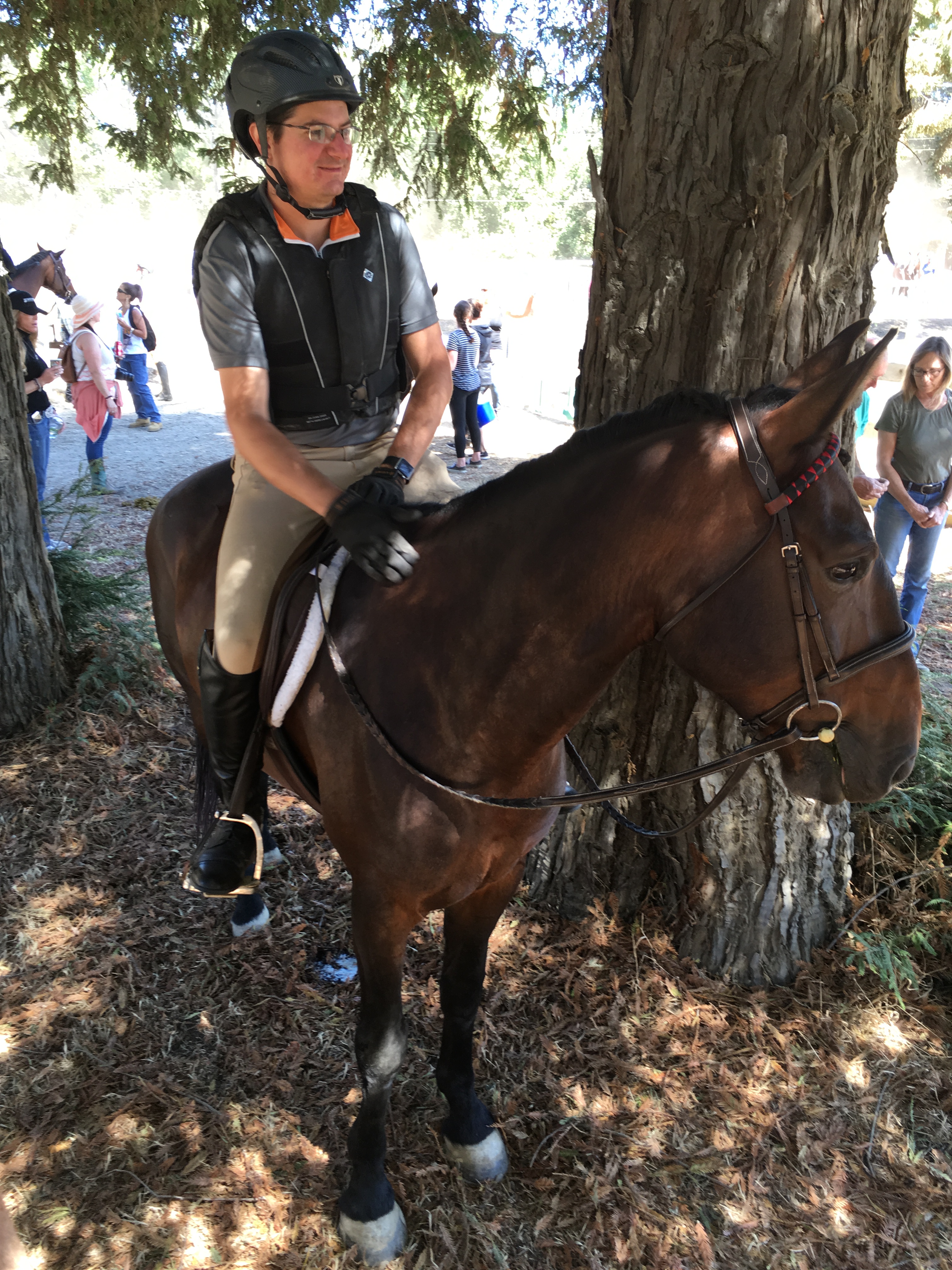 Because my Hunter Hack class was right after my husband’s, I was mounted and thus couldn’t get very close to the ring to take good pictures (because mules are scary, remember). My husband managed to score 5th in his class though. That was his only ribbon for the day. 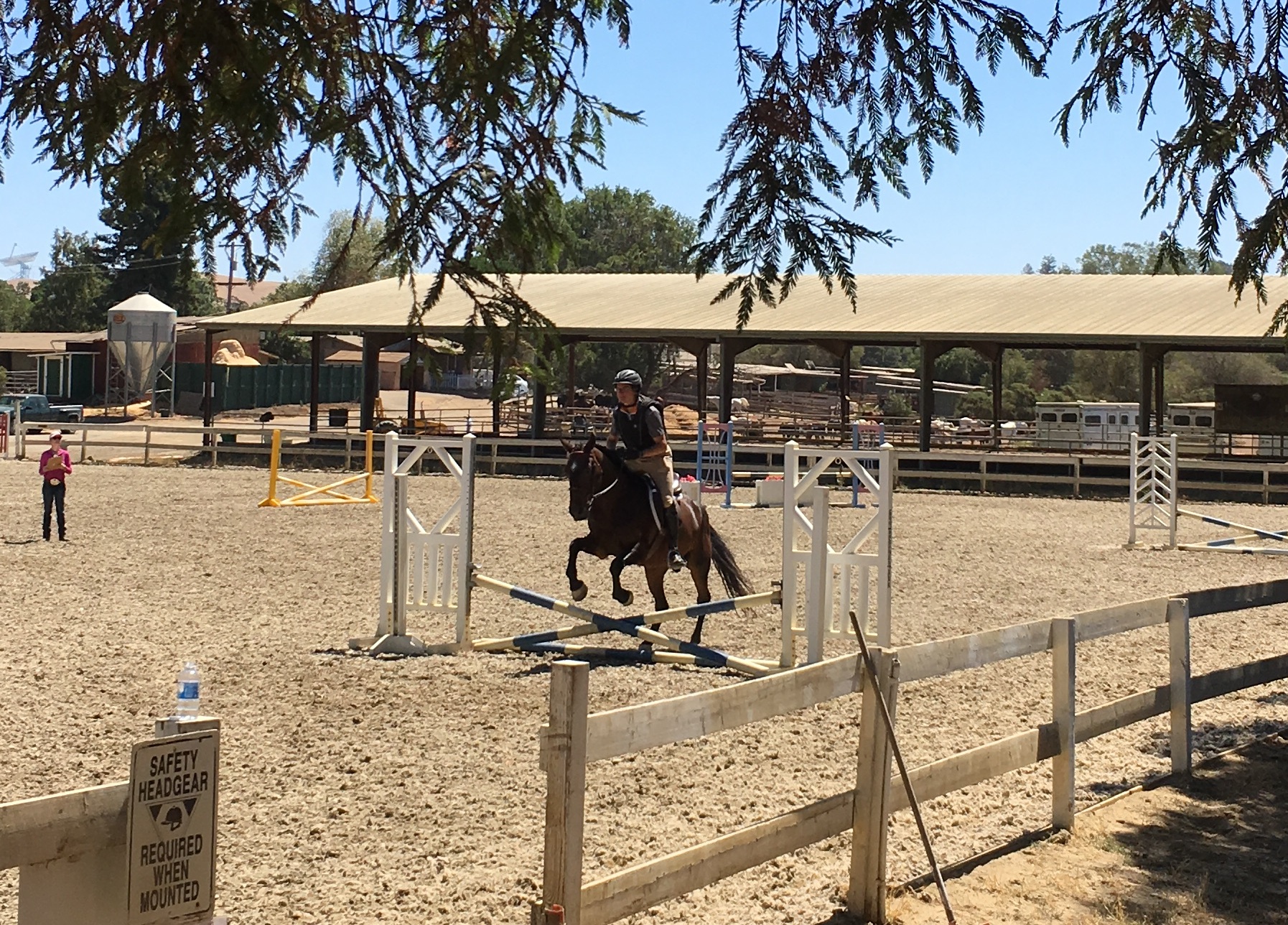 The Hunter Hack was at least being held in the larger jumping arena so there was more room for my division to spread out and cantering wasn’t quite so nerve-wracking. I thought Nilla did quite well, but we trotted in between the two jumps and the judge commented that trotting wasn’t allowed. I approached her during the lunch break and asked about that and showed her the show premium saying trotting was allowed between fences. She said she didn’t know that. 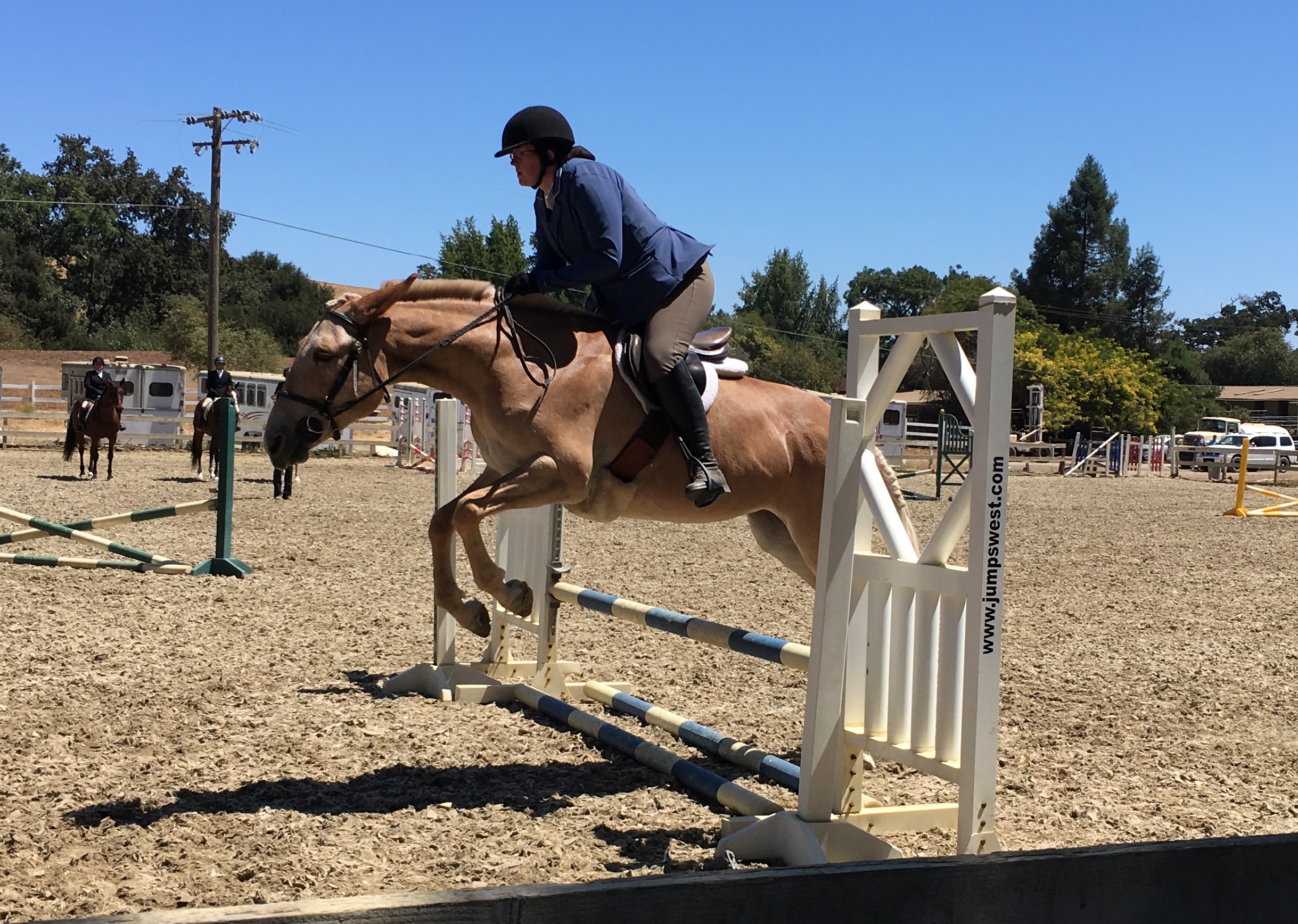 Lunch break was pretty short because they were offering warm-up/schooling rounds during lunch after the ring was dragged. It seemed like almost everyone signed up for it so it took forever. My husband and the girls from our barn all did the 1’6″ hunters (I feel like I usually see 18″ and not 1’6″, but this show called it 1’6″). Of course, I don’t think a single cross rail was higher than 12″, so it was a little difficult to get any good pictures as Eugene was mostly just stepping over the jumps. 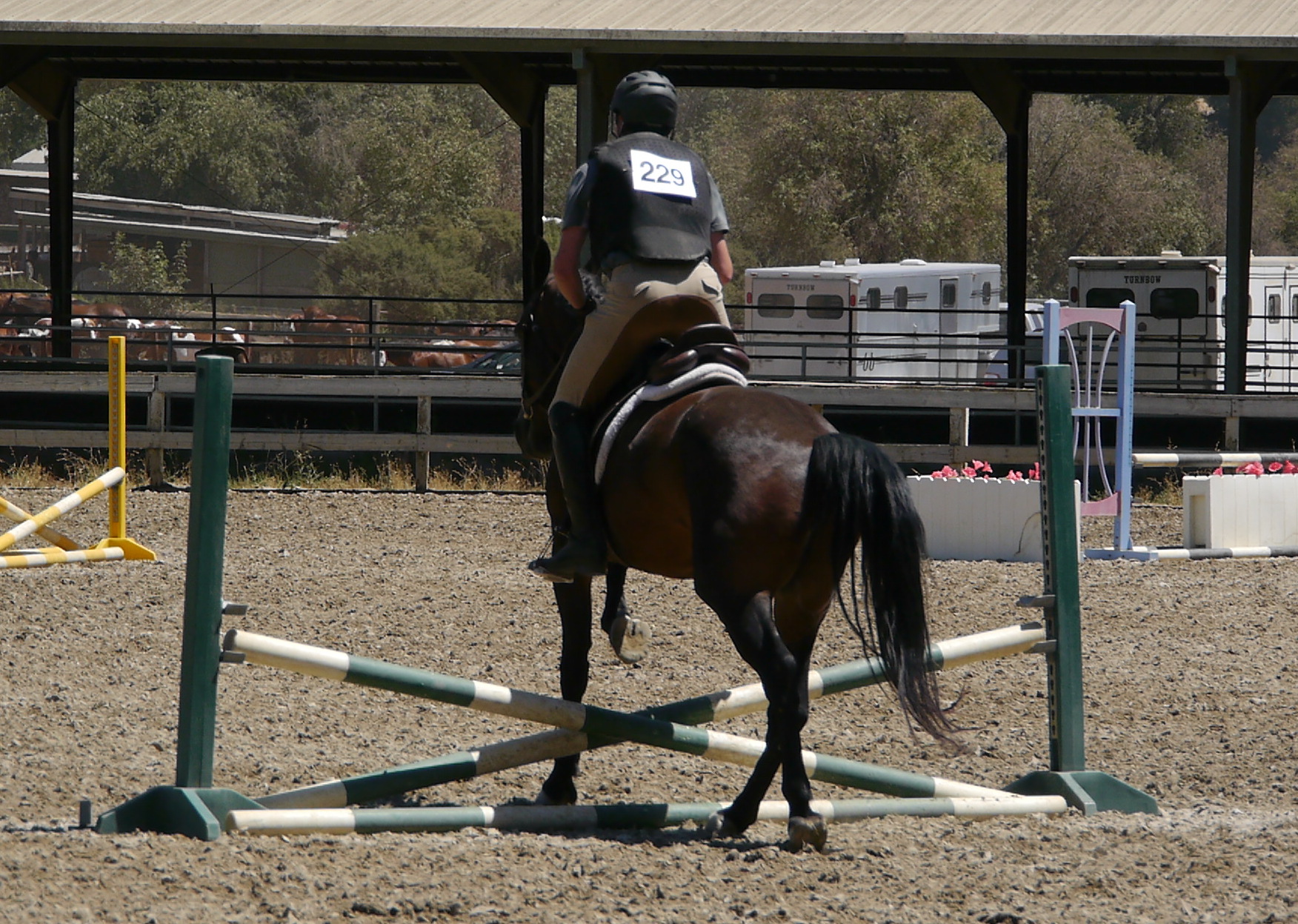 Eugene was a really good boy and was much more relaxed and confident at this show. One of the girls from our barn got 4th in this class, which the little group from our barn all cheered very loudly for.

I did Hunter 2′ and Jumpers 2′ after that. Hunter went terribly. Nilla was really convinced it would be better to run back out the gate instead of turning to look at the 4th jump so when I finally dragged her head around and got her lined up to the jump she was rather surprised by it and knocked the pole down. 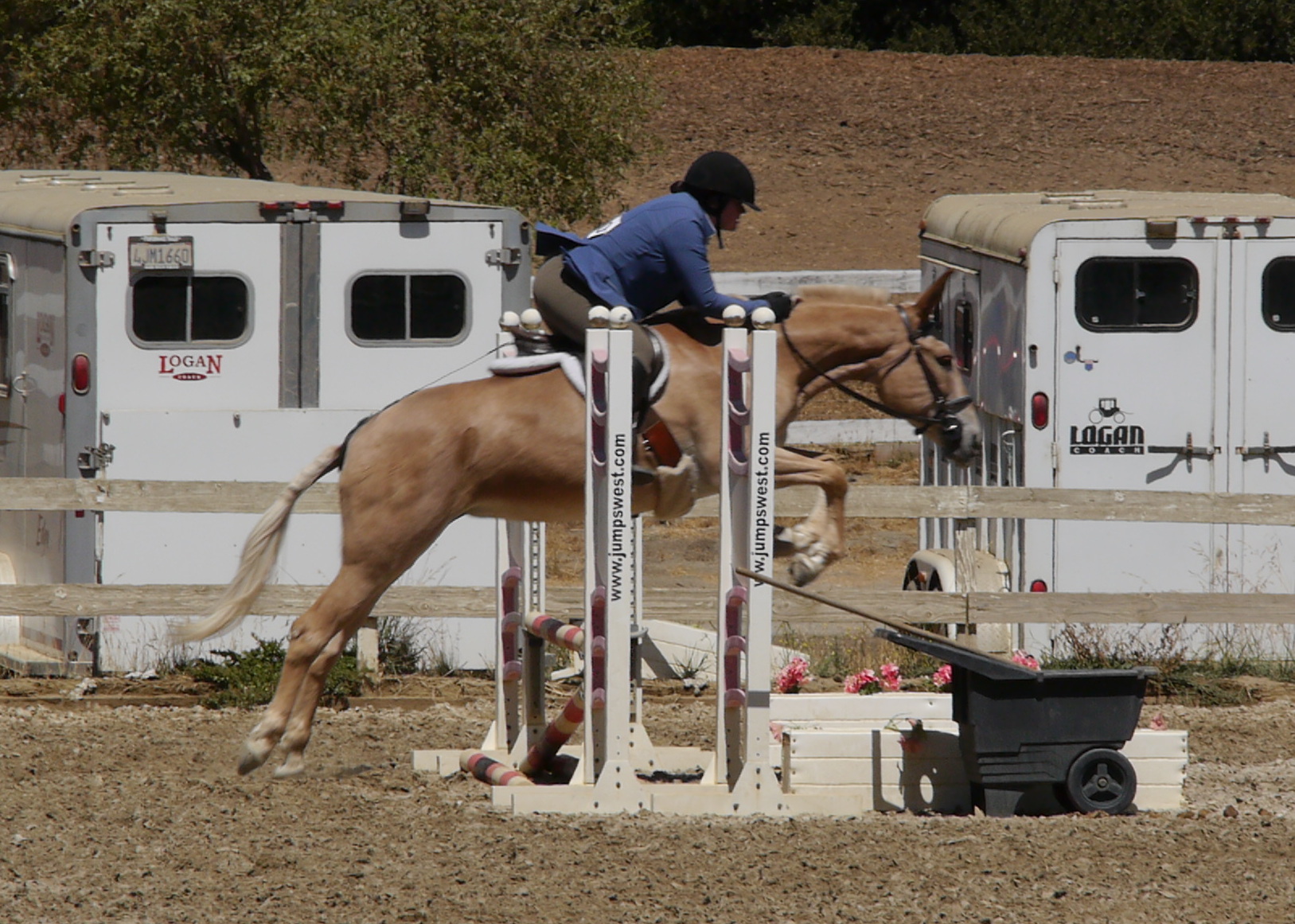 Jumpers I figured we actually had a chance at since we just had to go clear and then get a good time in the jump off. No subjective scoring. Nilla normally hates touching rails. However, when we went in, she got quite sullen because she was convinced we were done. After all, we’d been standing around for more than 30 minutes. Why would we not be done? So she was behind my leg and basically ignoring me the whole way to the first jump. Which she hit. With that down, I actually figured, there’s nothing to lose now and I schooled the crap out of the rest of the course. I made her canter the jumps and I made her listen to me. No running out towards the gate. Pick your damned feet up. Leg on means go. She flew around that course. 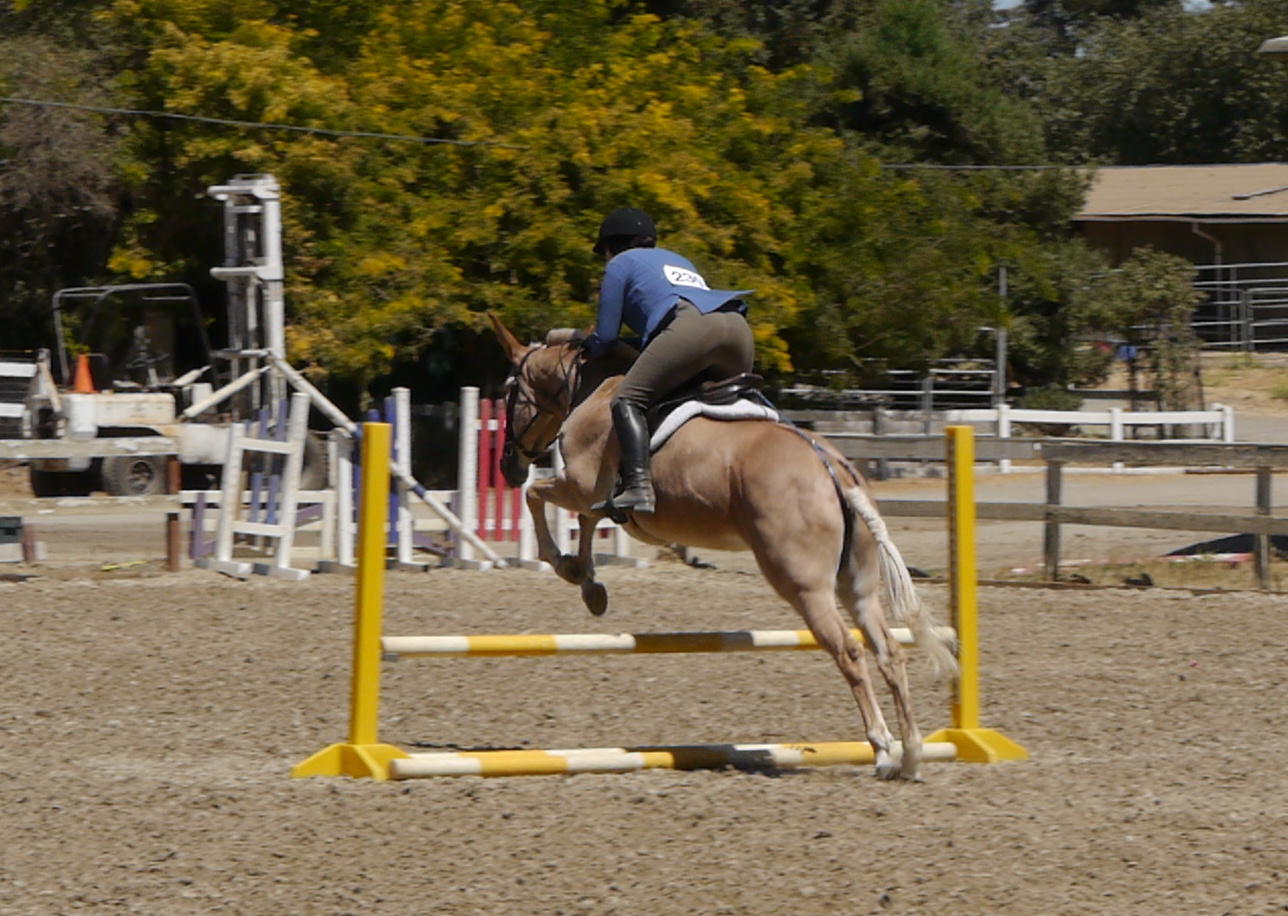 We obviously didn’t get to do the jump off, but it was a good lesson. I knew she wasn’t listening to me and I should have done an intro circle and made her wake up before going to the first jump. I also rarely canter jumps since she misses distances with cantering and hates when I mess with her decision making. So I usually just trot around and leave her alone. However, if she’s going to piss off and not keep her end of that bargain, then I won’t keep mine. And that course went really well after the first jump. Apparently I need to just start actually riding her more instead of just being a passenger.

I’d still like to try to find a jumping trainer in my area who will travel as I’d like to get better and we clearly need the instruction. However, I have had a hard time finding anyone who is actually good who will come to our barn. I have thought of trailering out, but it’s such a project to hook up the trailer. Maybe this fall.