Although Levi’s still missing his shoe, I was tired of not riding and wanted to get out this weekend. The trails at Wunderlich have pretty decent footing – not a ton of big rocks or all gravel. We invited our barn mate who has the third prison Mustang, Devro, to join us on a ride to Alice’s Restaurant.

We started the ride heading to the meadow where we found the views a bit obscured by smoke. We’re not even near any of the fires in California, but there are so many big ones, the smoke is migrating down to us most days. 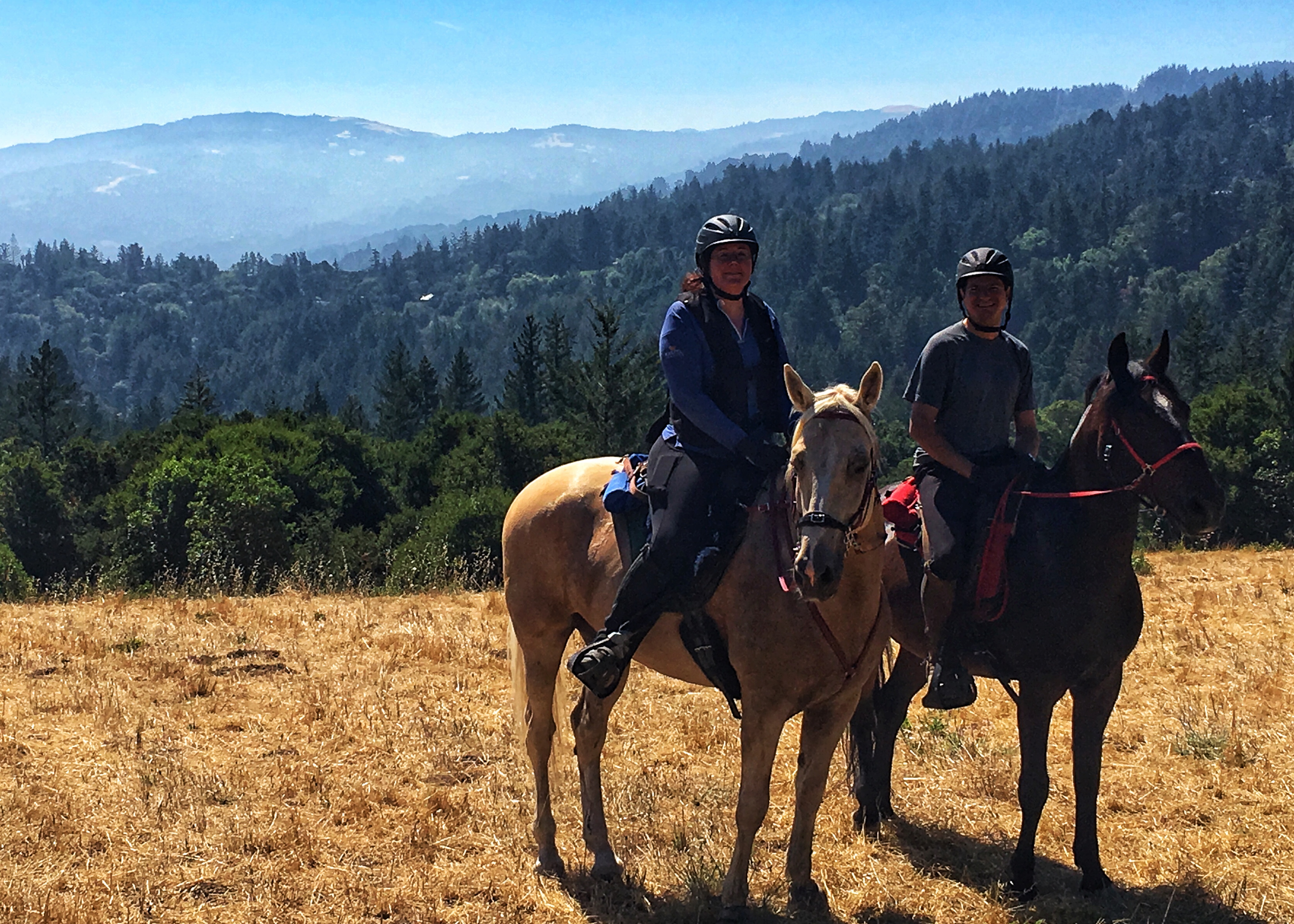 Wunderlich is one of my favorite parks in this area. I love riding through all the gorgeous redwood trees. The park’s always cooler than the surrounding area and it becomes one of our go-to parks in the hot summer months. 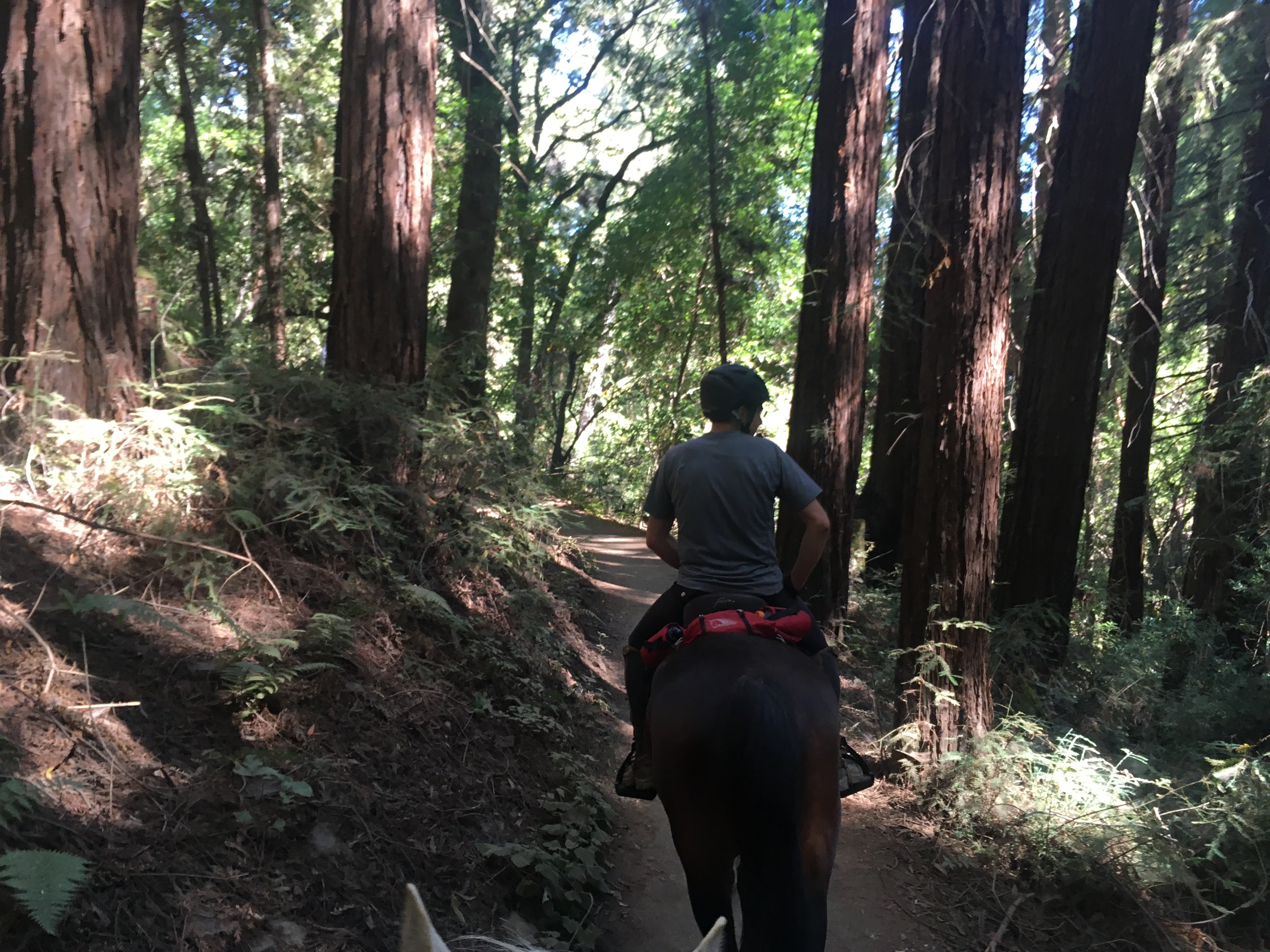 When we got to Alice’s, it was still early enough that it was only mildly packed. We had to wait a little bit for a table and we got mobbed by small children who wanted to pet the ponies.

While Levi is the friendliest of the horses, he super mouthy and I don’t trust him not to bite small hands – especially when children are literally poking those hands into his mouth. I let a few parents hold their kids up and pet his head out of mouth range. Eugene was surprisingly good about crowds of strange people surrounding and petting him. 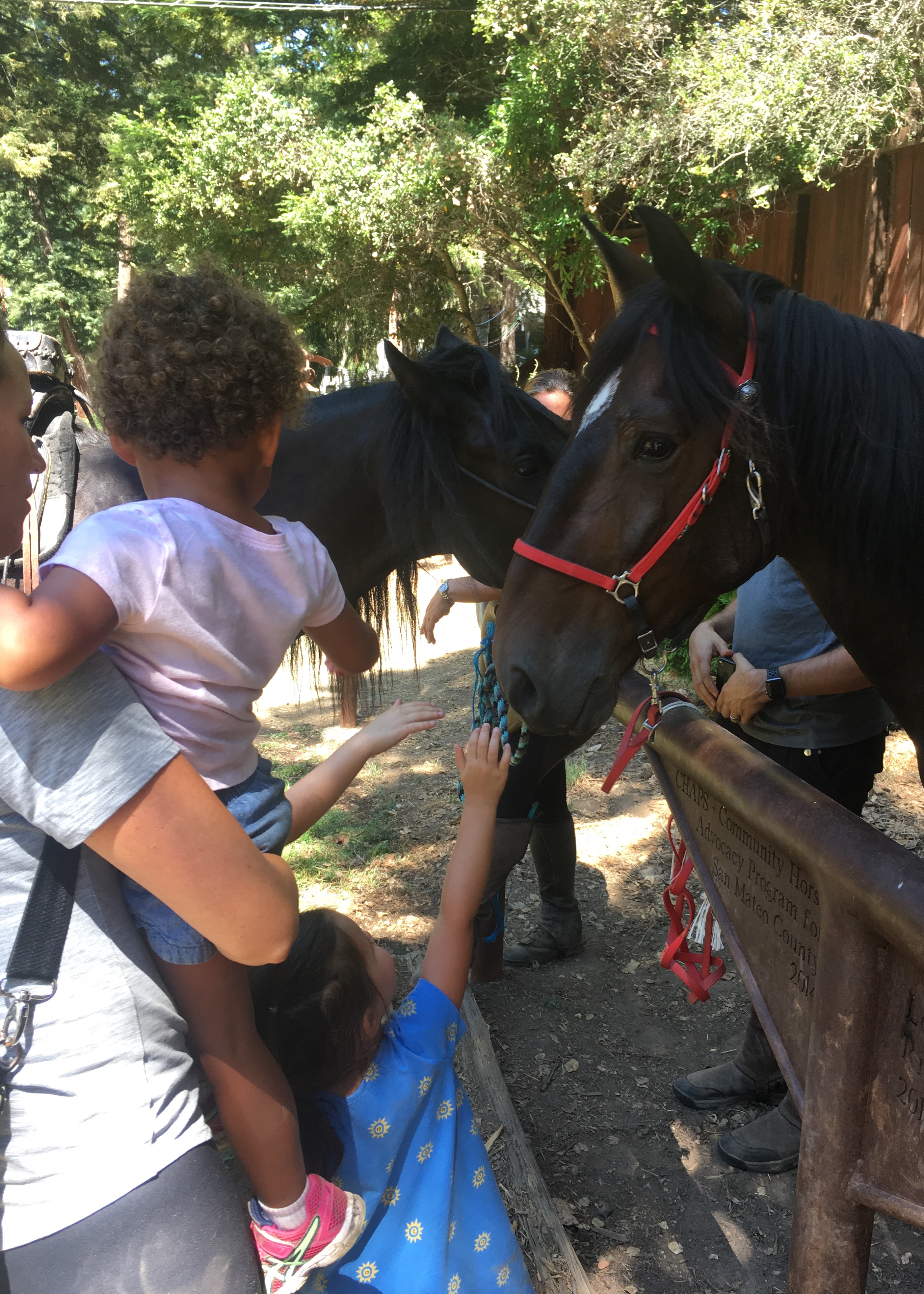 I’d say he’s growing up, but he ran away from me when I went to catch Levi that same morning so, maybe not.

Lunch was great. There’s a reason the crowds are so big at Alice’s; the food is really good. It’s like upscale diner/bar/grill food. 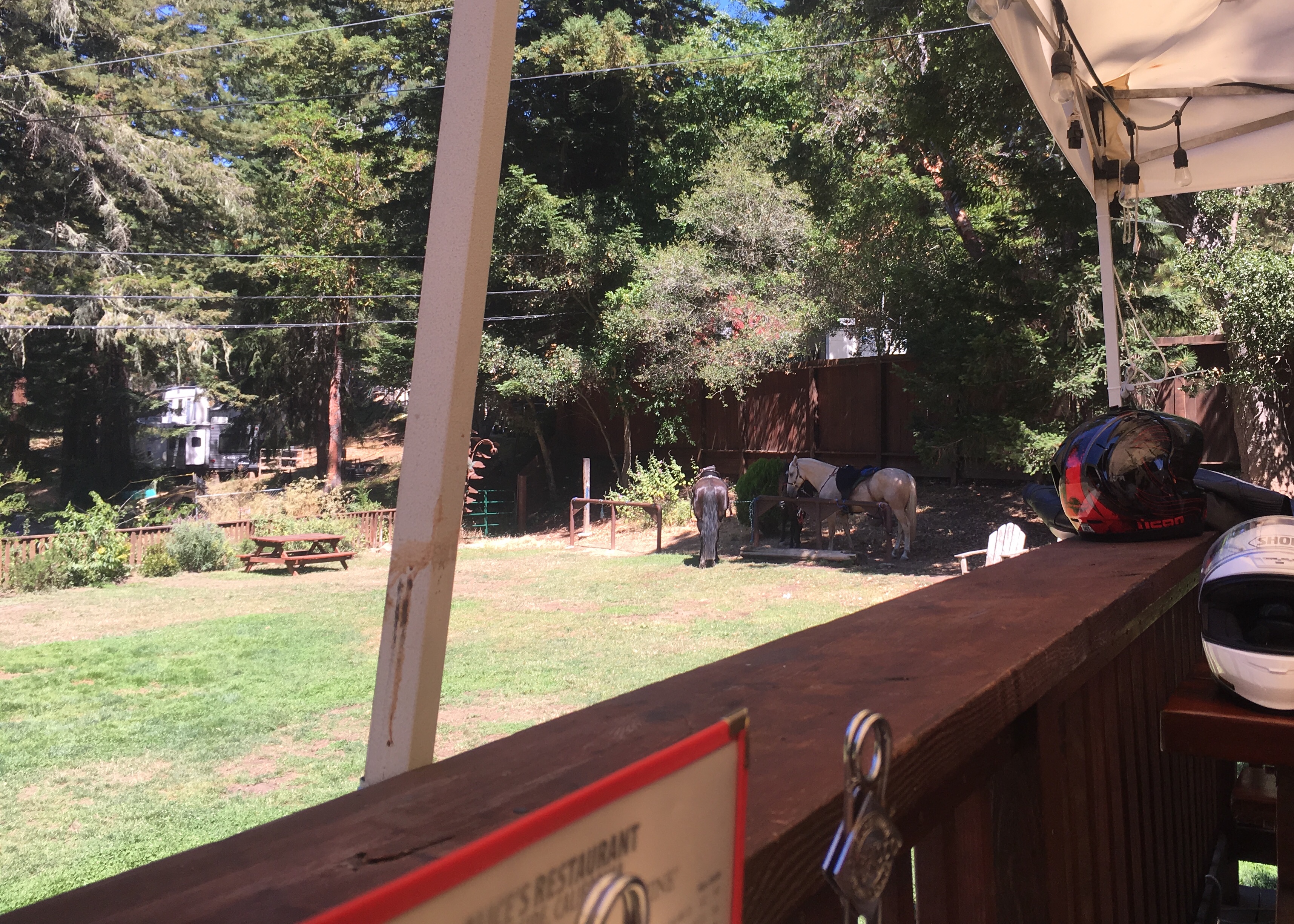 The view’s not bad either

The ponies had a nice snooze in the shade while we ate. Another couple with horses came in while we were eating and they took our spots when we went to leave. As we were riding back, we passed more riders heading for Alice’s. It’s a popular ride.

The ride back was nice as well. They’ve fixed the trail since the last time I rode there and the new trail has actual switchbacks instead of direct descents down the mountainside. I saw an article about how a lot of the trail repair was paid for by the Woodside Horse Owner’s Association. I wish there were a sign at the park telling people about it. While most hikers we meet are, if not happy to see horses, at least polite about it, some hikers give horses dirty looks. They don’t like the smell and the supposed “destruction” of the trails that they imagine horses do. When really, most trails in this country were created with horse power, and in many places horses and mules are still the only way to keep fire fighters and rangers supplied. I could go on and on forever about that, but I still think it would be nice if angry hikers knew that equestrians paid for the trails they’re walking to be fixed. 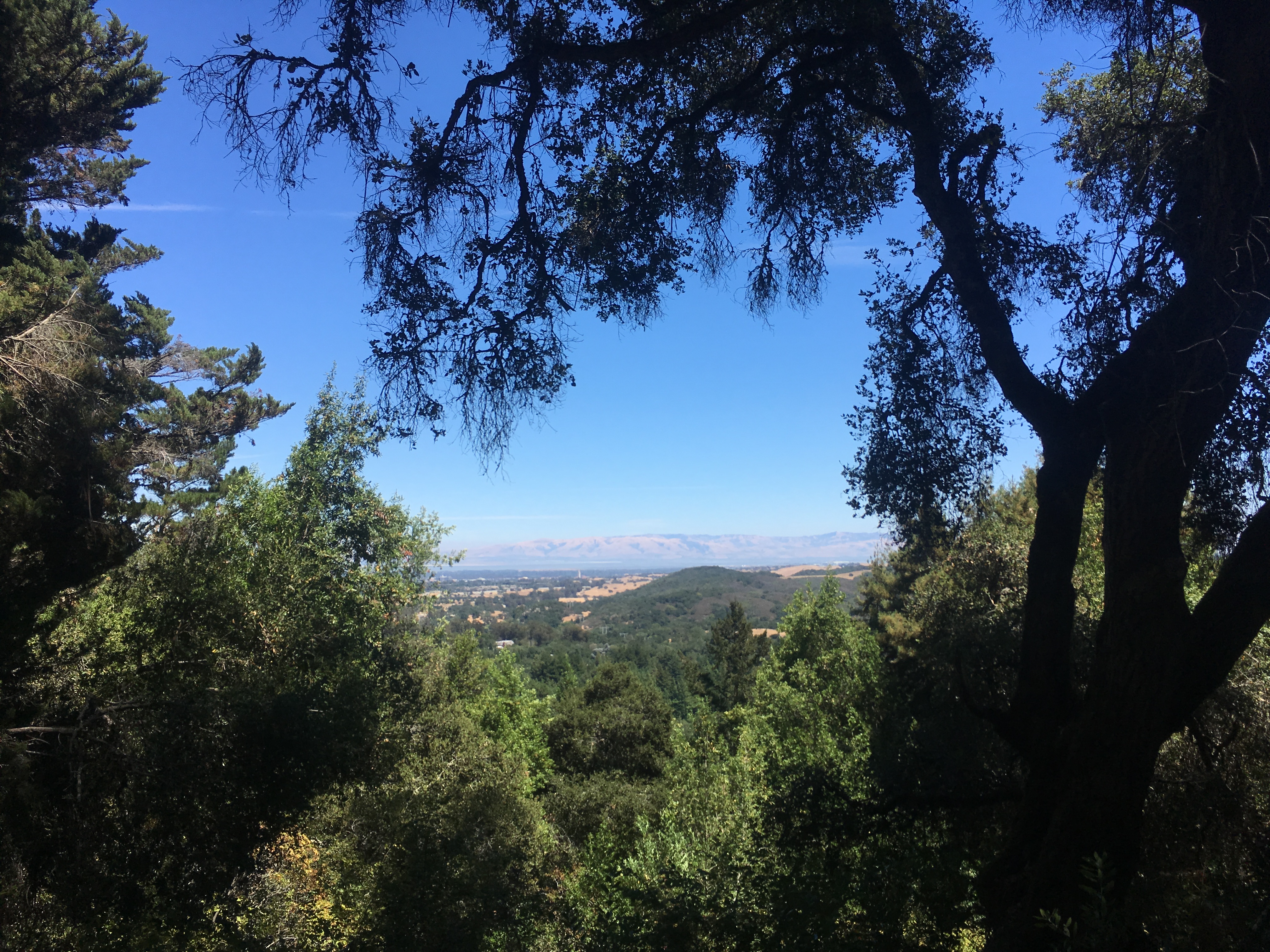 The fog had burnt off, but the smoke haze remained

It was a great ride and a good way to spend the day. The three Mustangs all get along really well and seemed to enjoy themselves out on the trails. 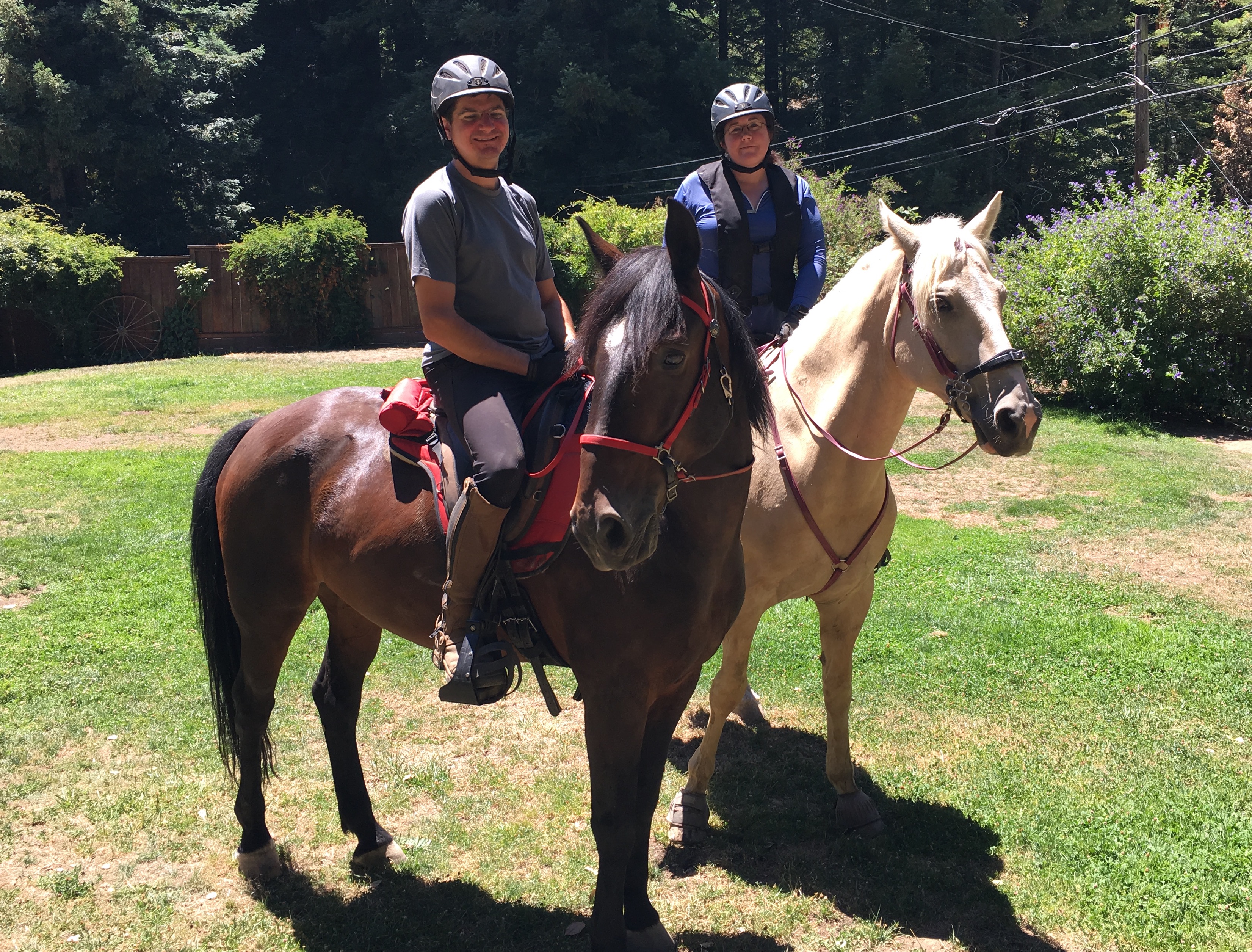