On Saturday my husband and I went to the JK Presents schooling show at the Woodside Horse Park. They have a cool thing on Saturdays where you can do ticketed rounds. Each ticket cost $20, which is still pretty steep to me for a schooling show, but cheaper than actually judged classes. You buy some tickets then hand one over when you want to enter a class. If you go clear, you get a blue ribbon. That’s it.

After Eugene’s behavior at the Eventful Acres show, we realized that he needs to go to a lot more shows to learn to relax and get over it. Since this show was 15 minutes form our house, it was convenient. We did have to get up super early to be there for the 8am .65m class, which initially was annoying, but given how freaking hot it was, was actually a good thing.

My husband did 2 rounds at .65 jumpers but they had rails so no ribbons. We went up to the hunter ring to try Equitation just for a change of arena and jumps since the whole reason we were there was experience. 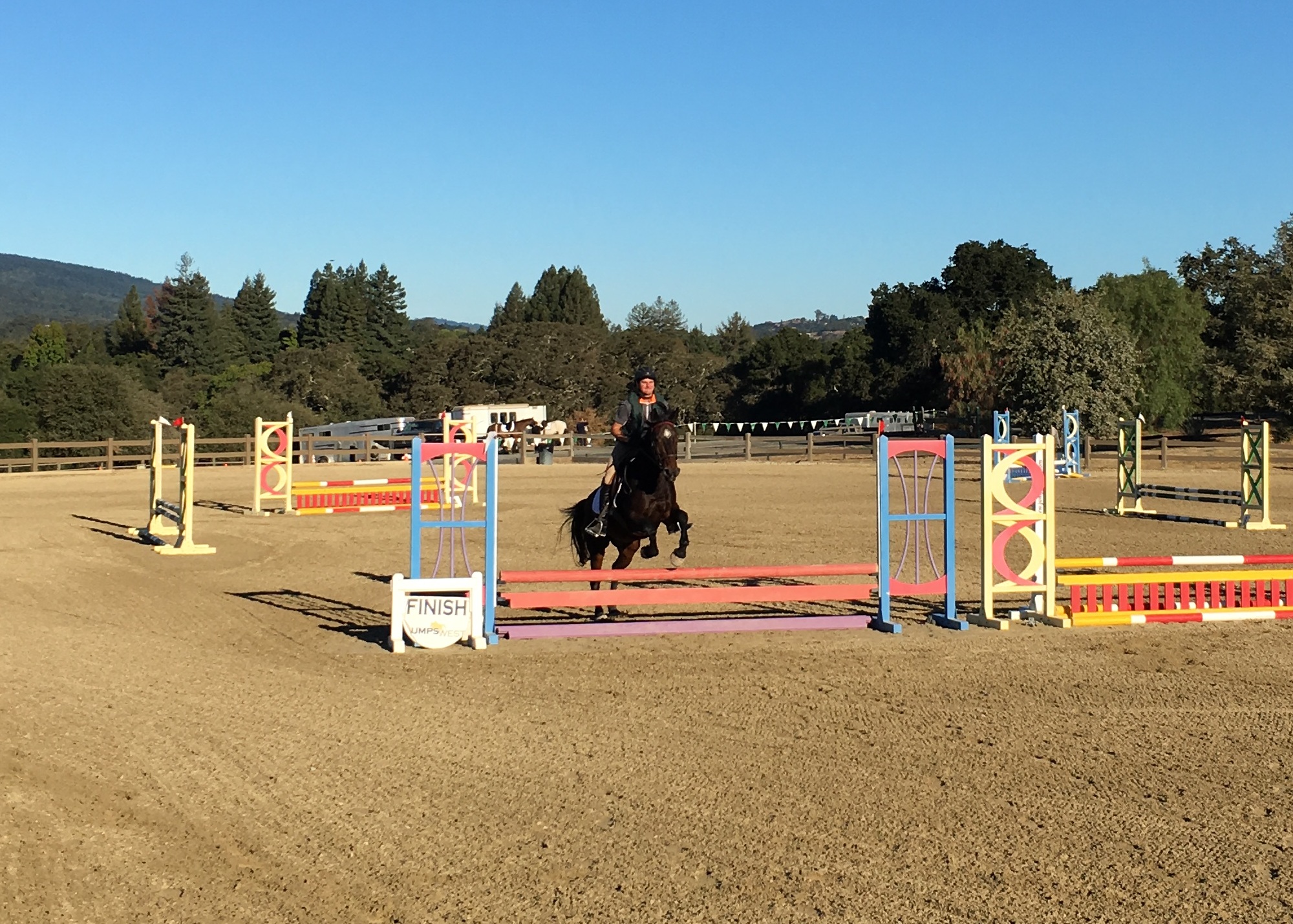 Eugene had plenty of stuff to spook at in the arenas, though the warm ups were running pretty quiet and weren’t very busy so he didn’t get much practice at that. I was really impressed with this spook as I thought my husband was going to quit and come back around, but he said no, he knew Eugene could step over it from a standstill and he wasn’t letting him out of it. Apparently he was spooking at some horses you can’t see on the other side of the bank. Since rails were the only thing that counted, they actually got a clear round ribbon for this one.

To keep mixing it up, we went back down to the jumper arena and they did a round at .75m. They proceeded to hit like 4 or 5 of the 9 jumps, but whatever, we weren’t here for winning, we were here for experience. He hit the first few and then learned to pick his feet up. 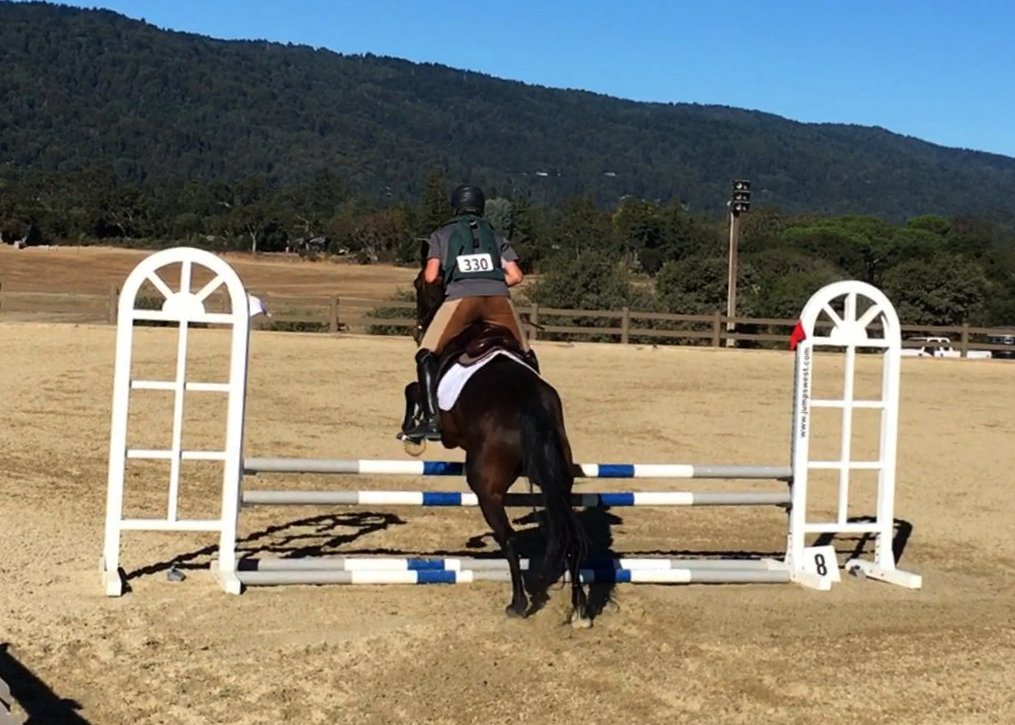 So we ventured back up to the hunter ring for the 2’3″ class where Eugene went clear again. I guess running into jumps taught him to pick his feet up? Or maybe he just actually tries when the jumps are bigger? Who knows. 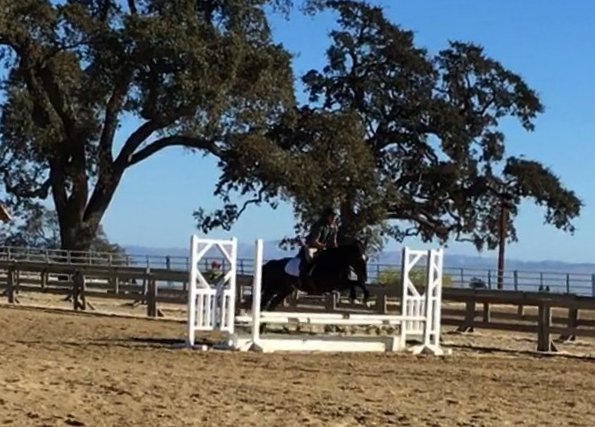 Blurry screenshot from the video

As for me and the mule, we had a similar experience. Nilla went around knocking poles down at the .65 and then went clear at .75. I had originally planned to do .85 as well, but the mule was in a mood and it was freaking hot so we just went home. 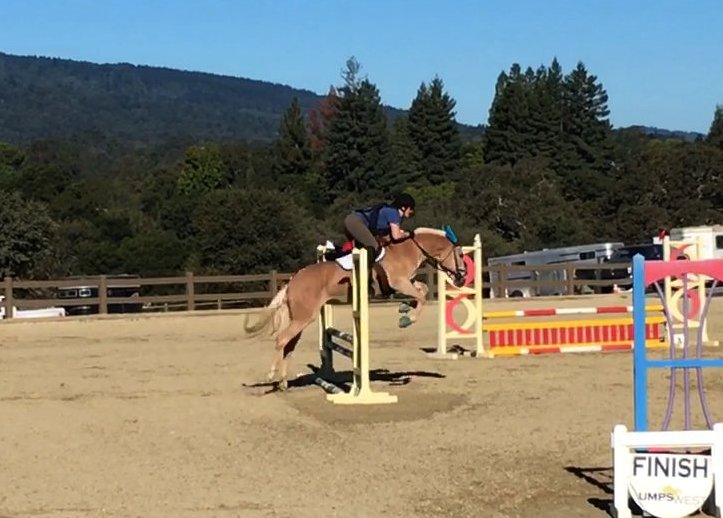 Nilla does not like to take input from me in regards to striding leading up to fences. Then we inevitably gets super close and has to jump awkwardly. I can have a fight with her and get the striding right, but it’s generally not worth the fight. She’s a mule. She has opinions and she’s up for a fight. I’d rather just let her get the bad strides and move on. Some days she’s in a more listening mood and I can actually guide us around a course like we’re not idiots, but Saturday was not that day. And she doesn’t actually need show experience like Eugene does (jumping experience yes, show experience no) so no reason to stress it.