The weekend after Camelot, we went to a local schooling combined test. This event was casual, fun, and only 15 minutes from our barn. They were doing the B tests for most divisions and my husband was eager to do a trial run of Novice B. I was interested in going because they were offering an intro division. I moved up to BN because intro isn’t challenging to either Levi or me at this point and I was getting a bit bored of trotting over 2′ jumps. However, Camelot showed me that I don’t feel comfortable at 2’7″ yet. I thought a round at intro might build my confidence up again.

We got to the Ranch in the morning, checked in, and then went to walk the course. The jumping portion was a combination of stadium jumps and cross country jumps out on the cross country field. It was a very inviting course at the intro level. The novice level had some challenging jumps including a sort of Weldon’s Wall with ditch in front of big jump and a huge rolltop that even the course designed said was probably training height and offered to let my husband do another jump in that line if he wanted to.

My husband was up first for both dressage and cross country. Their dressage test wasn’t terrible, but it wasn’t one of their better performances. Eugene was a bit disengaged and my husband didn’t get after him enough. The judging was crazy generous even for a schooling show and they pulled off a 29. 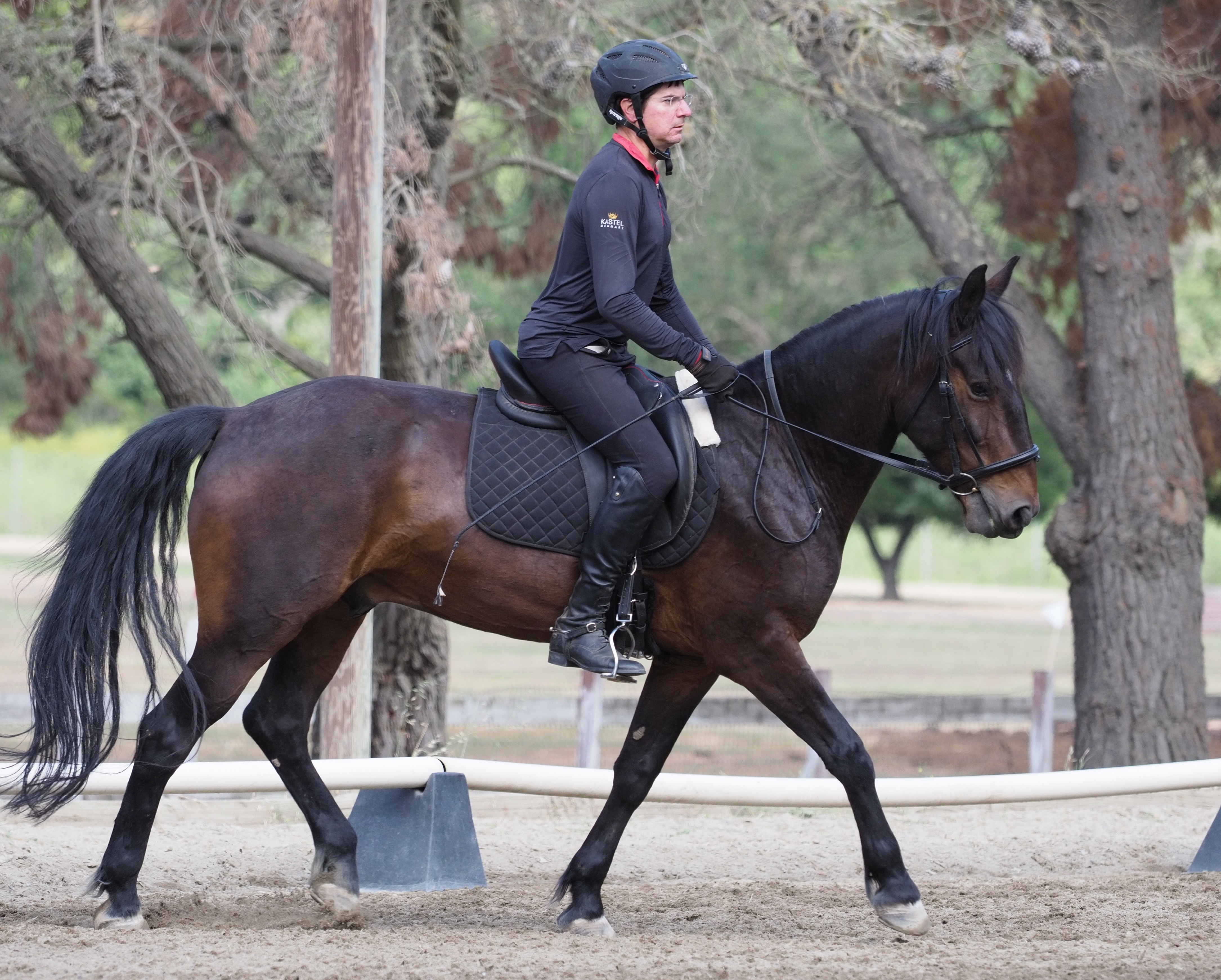 Novice B is a particularly difficult test for Eugene. The test has you do a canter circle at B, trot between B and M, then go immediately into a stretchy trot circle at C. Eugene doesn’t even do a stretchy trot well to begin with. Asking him to do it off of canter, which is the gait he has the most difficulty going on the bit in is really tough. 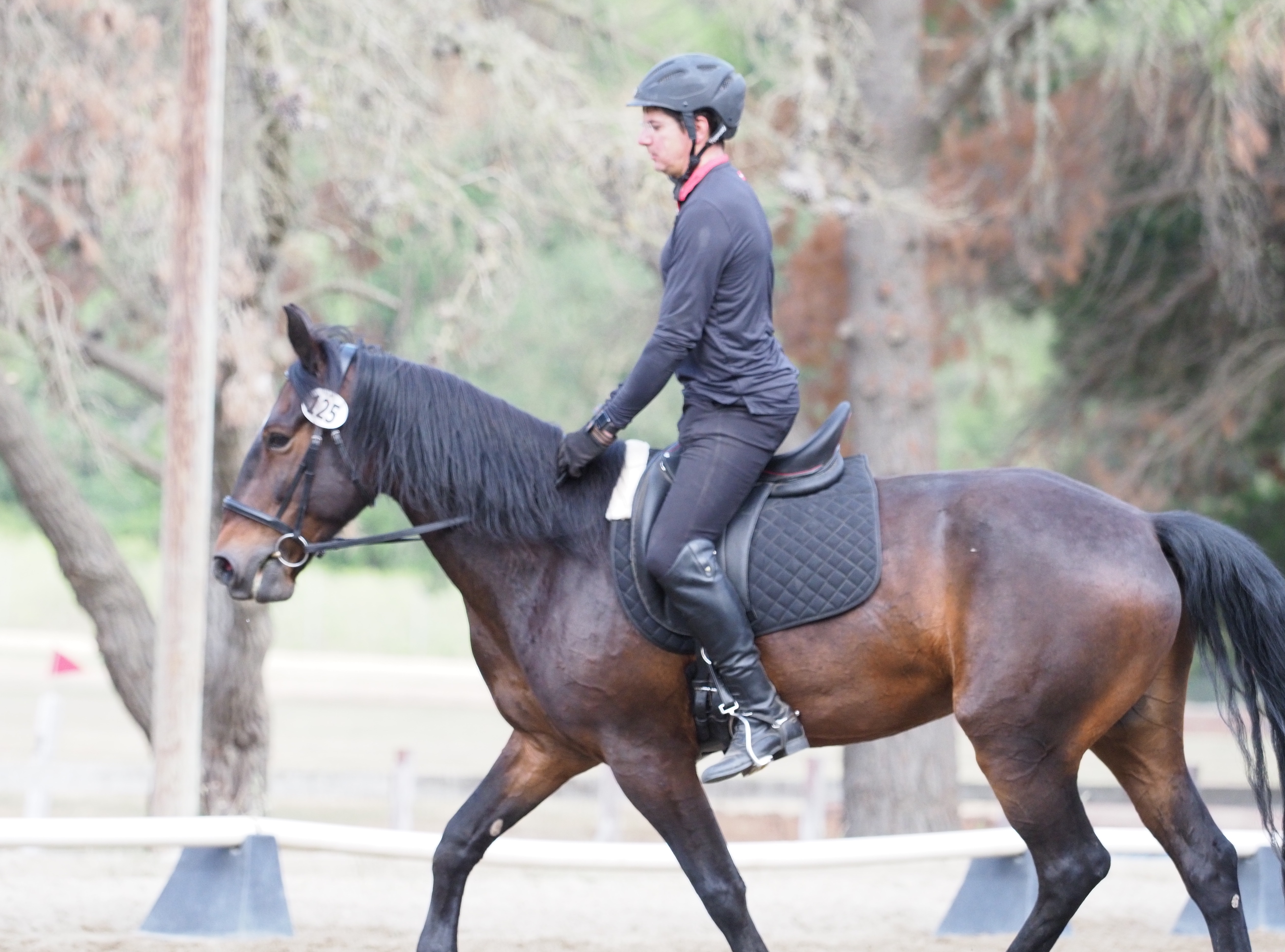 Eugene really just take the longer reins as an opening to raise his head instead of seeking the bit. Because the judge was generous they got a 6, though the comment was “needs to show stretch.” Although the scores were somewhat useless, the comments were on track. They got their leads and several comments about being “prompt.” 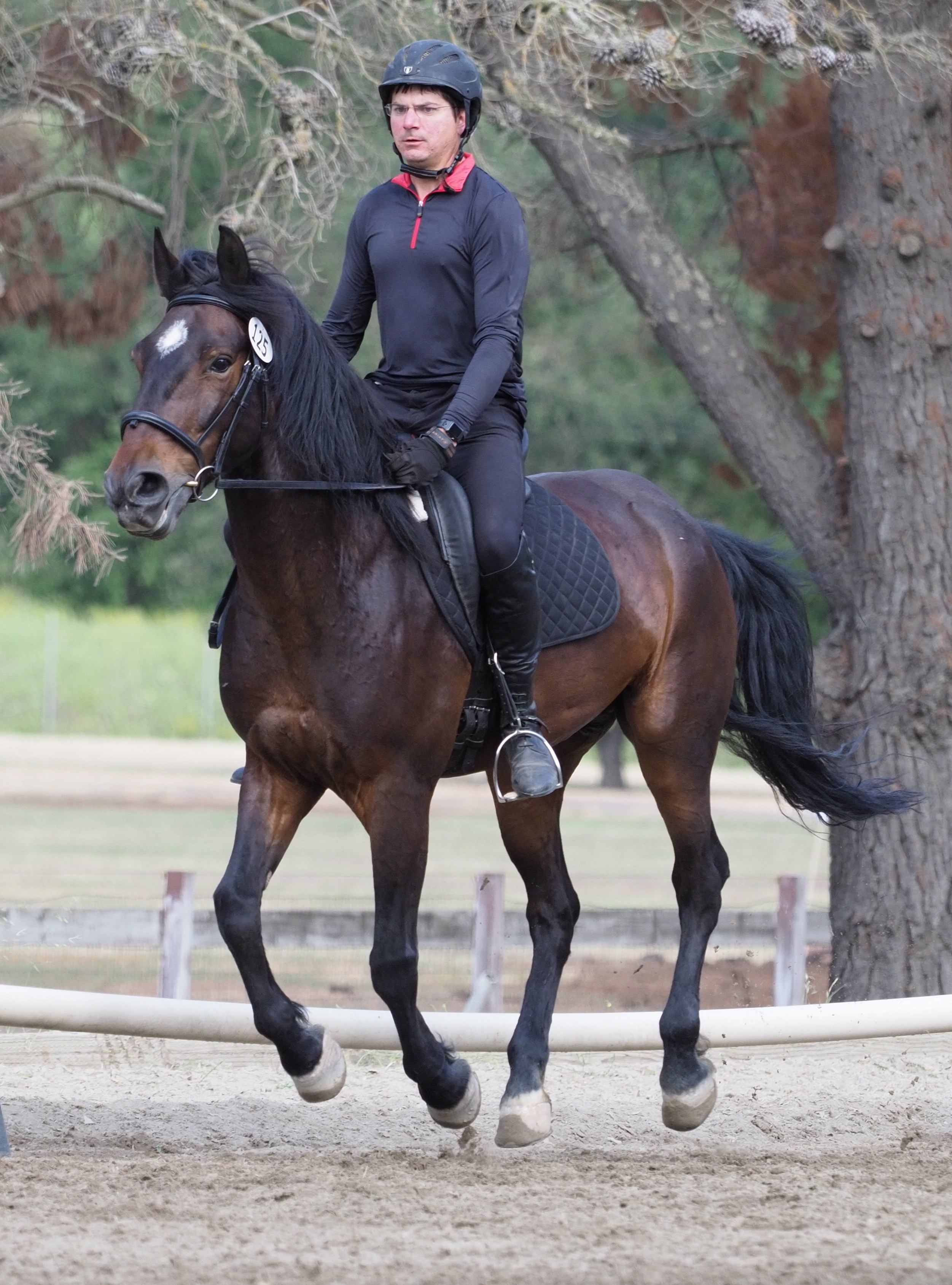 They had just enough time after dressage to swap tack and then go warm up for jumping. I missed warm up because I was out on the field getting ready to take pictures.

Eugene left the startbox sluggish and behind the leg and my husband just let him be like that and headed towards the freaking giant ass rolltop. And Eugene was like, umm no. 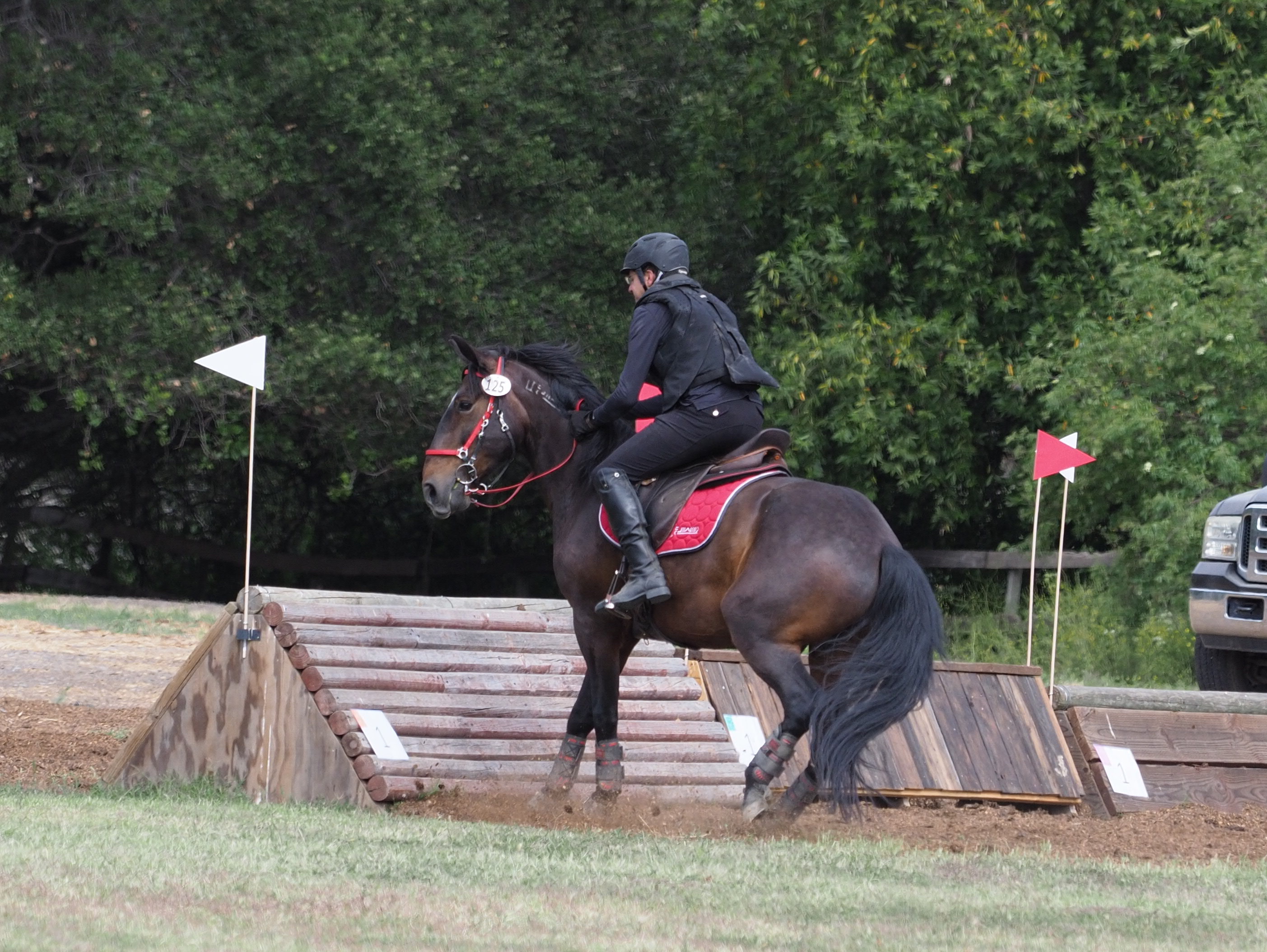 Eugene: I cannot do this Training jump from a crawl

My husband has been coasting for a while on Eugene’s good nature. He wants so much to please that he’d jump anything my husband pointed him at regardless of impulsion, straightness, ability, whatever. Now that the jumps are getting big, Eugene needs him to be a better rider. They circled and got over it. 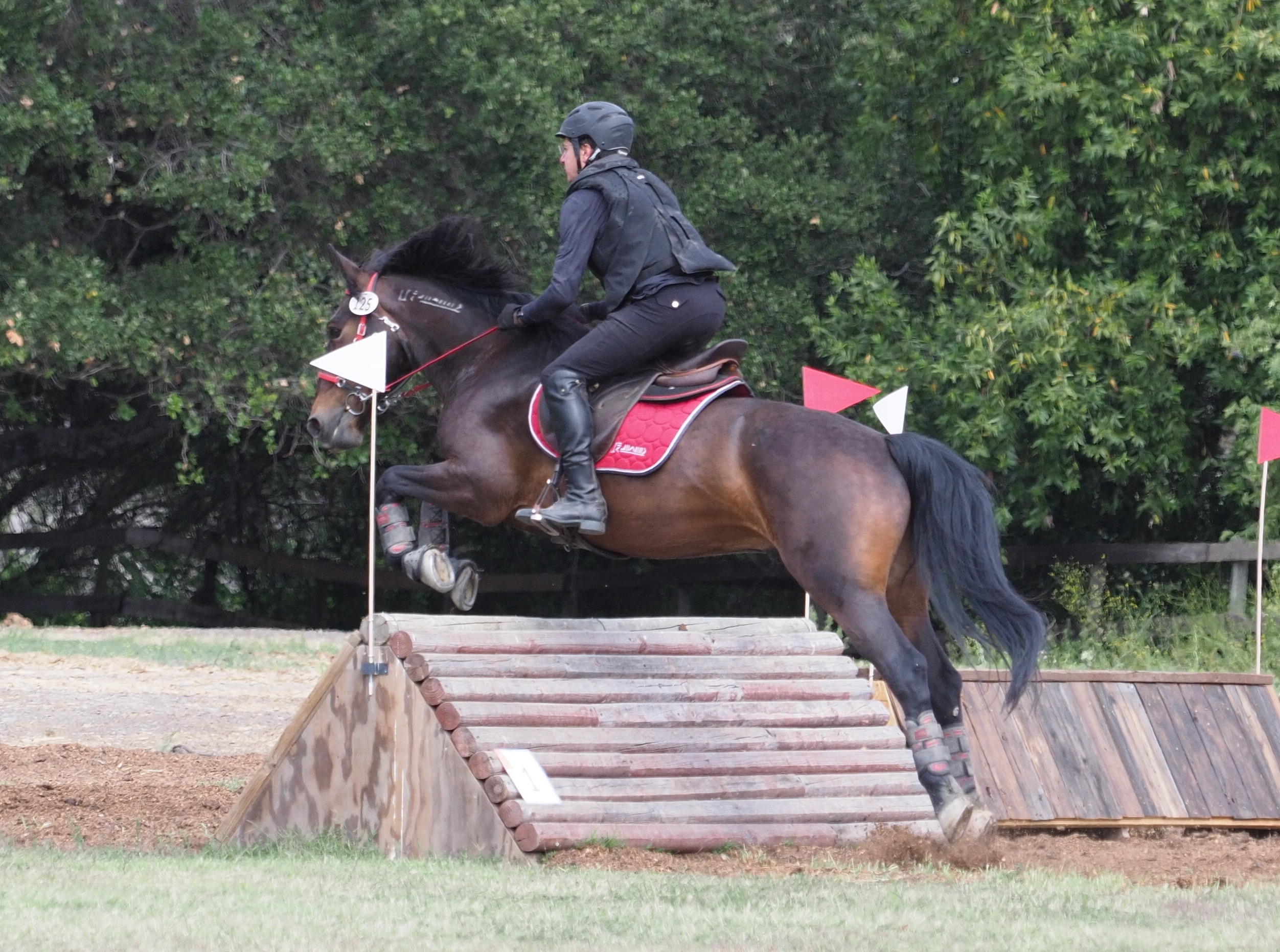 They never gained impulsion though and the whole course was just a crawl. I was standing in the middle of the field muttering “hit him” to myself. They were getting over things, but oh so slowly. 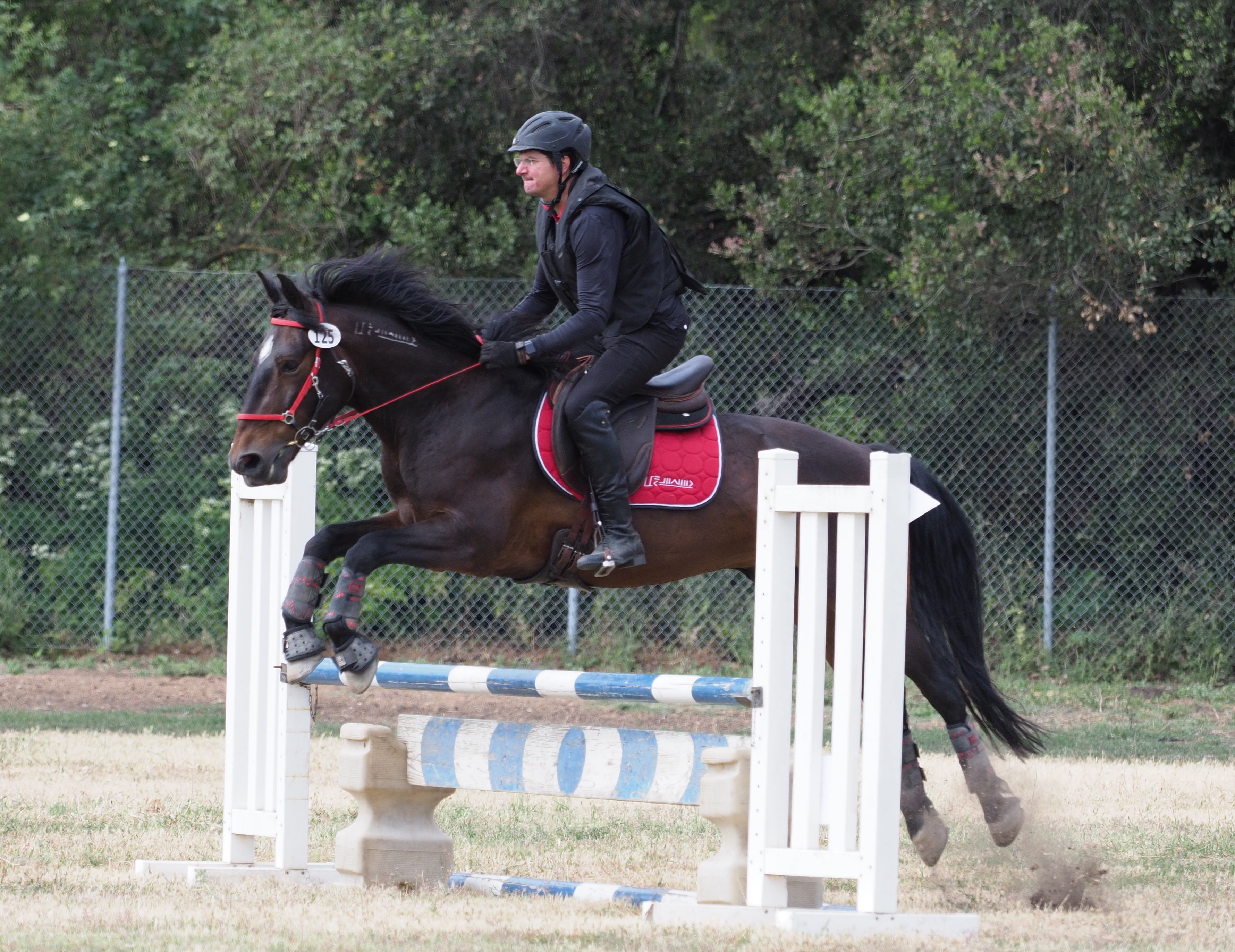 They did get over the mini Weldon’s Wall jump which I thought might be spooky to Eugene since he doesn’t like ditches, but Eugene was so focused on the jump he didn’t notice the ditch. 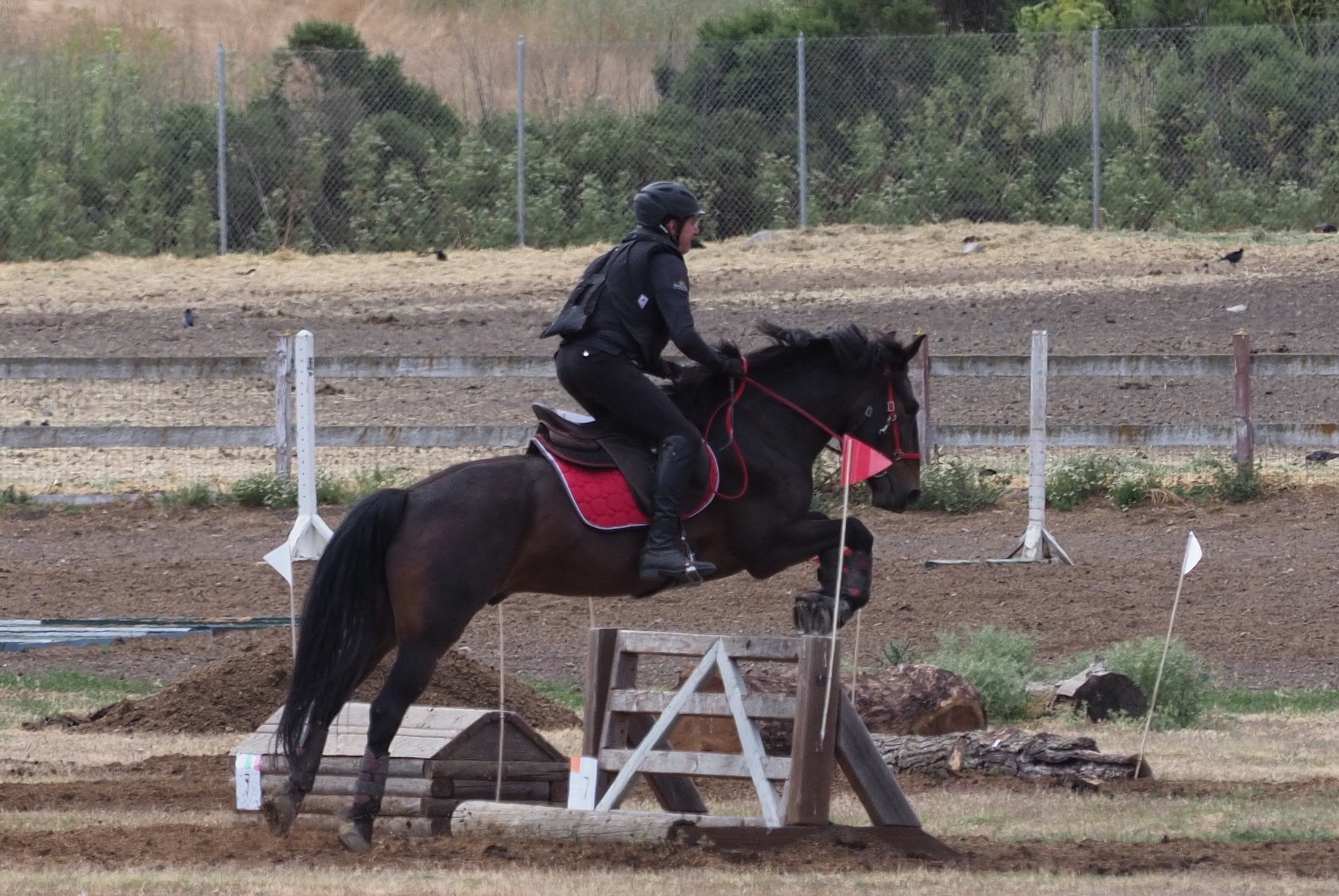 The novice course had to go over 2 jumps pressed up against the back of the field. The first jump went fine, but the second one was hidden between the back fence and a giant, shady tree. It was really dark and claustrophobic back there and I knew Eugene would be unnerved. 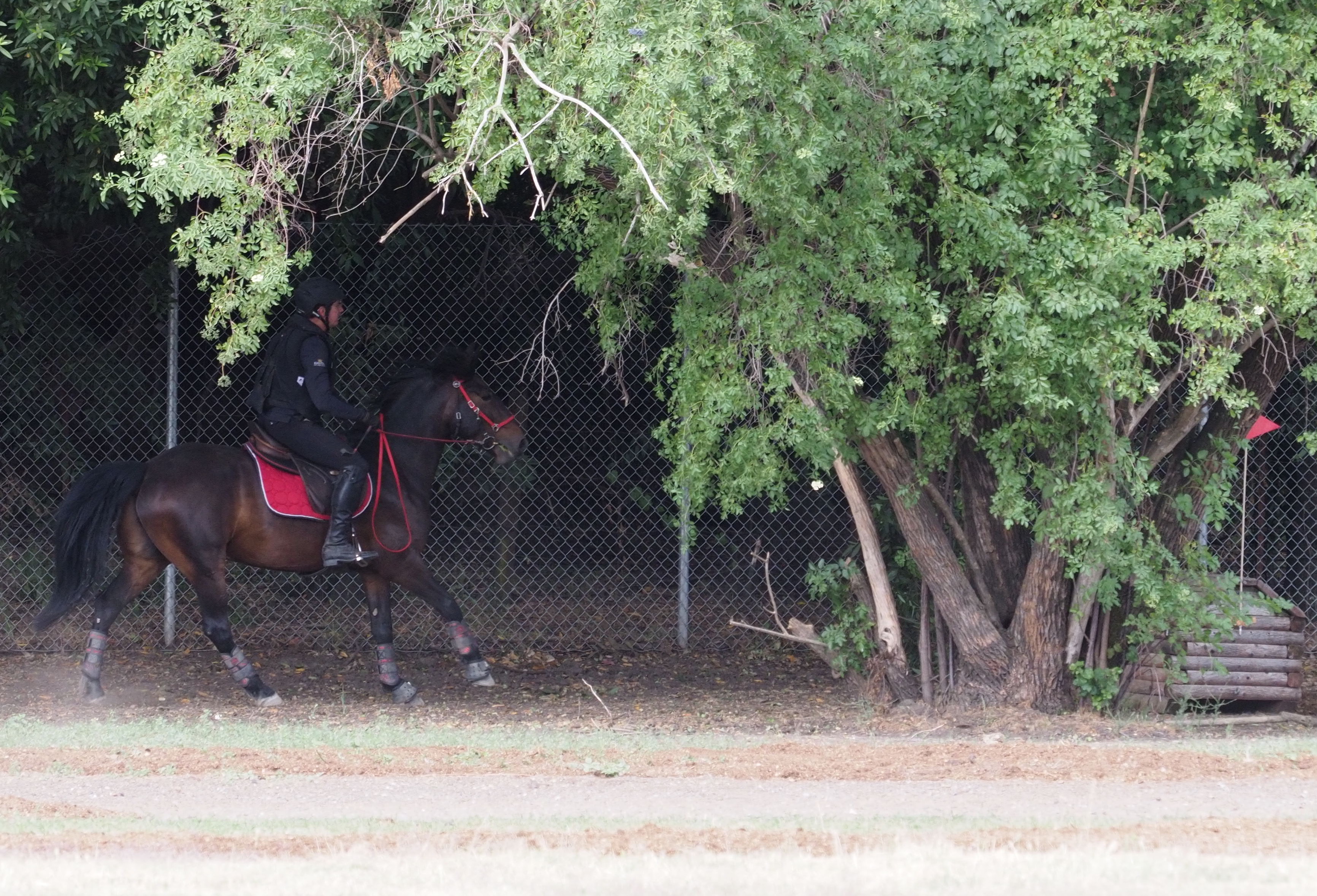 I was right and they had another refusal. A circle had them over it on the second attempt though I mostly got a picture of tree: 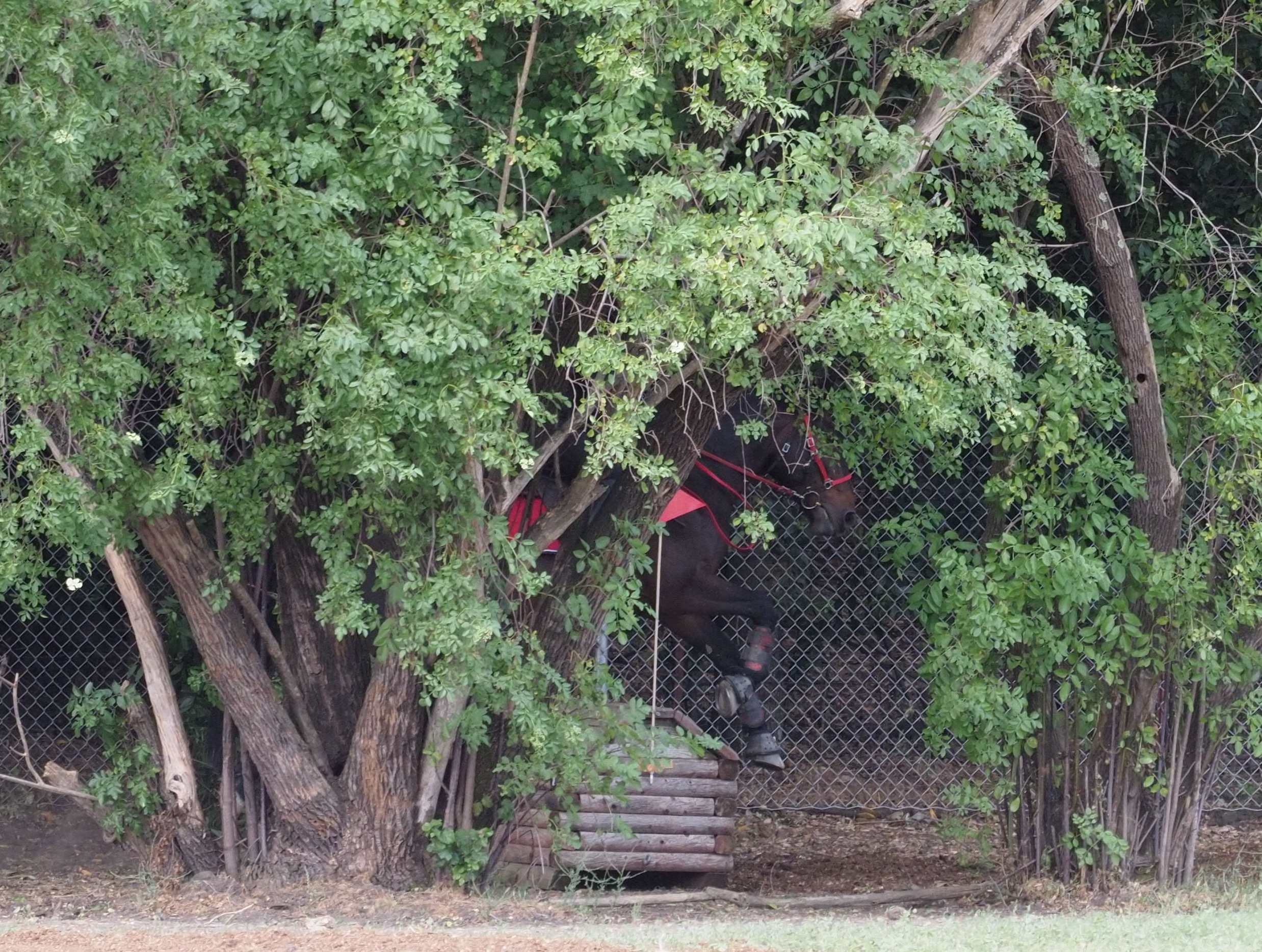 They got over everything else though and kept all the rails up. Their division was just 3 people so they even got a ribbon despite the refusals. 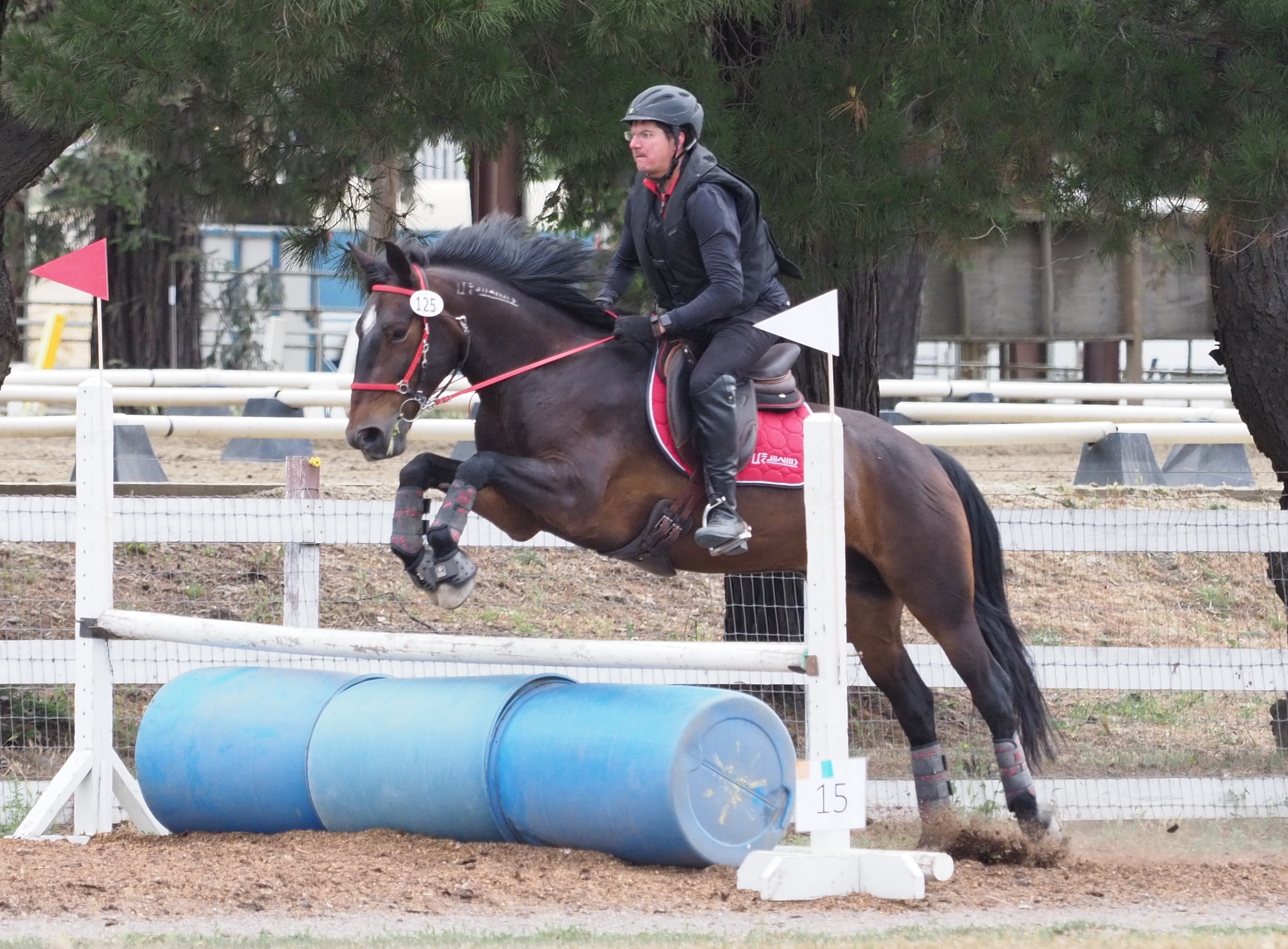 Although the riding was certainly part of the problem, it’s unlike Eugene to be so backed off of jumps. His unwillingness to pick up the correct lead in canter and his recent hesitation at jumping had me thinking he might be a bit uncomfortable. It has been over a year since his last hock injections. Luckily for Eugene, we had already booked the vet to come out the next day for that very purpose.