Nilla developed a very minor girth gall after the Weaverville endurance ride. The swelling didn’t show up until the next day and it was gone within a day of that. I figured I should get a new girth for her endurance saddle – I’m going to try a mohair girth – but didn’t think it needed to happen ASAP given how minor the swelling was. I added a sheepskin girth cover to cover us (ha ha ha) until I could get a new girth.

I couldn’t get the sheepskin on my shaped TSF girth so I left it off for our lesson. Turns out that was a bad idea. The next day she had a huge swelling. On both side this time. Which figures, because we finally had a good dressage lesson. Of course she needed to injure herself; we can’t actually have progress.

Since I want the gall to heal fully this time, I stopped riding her. In one day of poulticing, I got the swelling down to almost nothing and 48 hours later it was basically gone. However, if I poke around there, I can feel some very slight sub-dermal swelling. I know that galls really need a few weeks to fully heal even if they look fine on the surface, so she’s getting some time off.

On Saturday, my husband and I rode over to the winery. I rode Shasta who was like a lit wire so I was unable to hunt Pokemon on our ride over. She did double duty as a pack horse and brought our picnic with us. 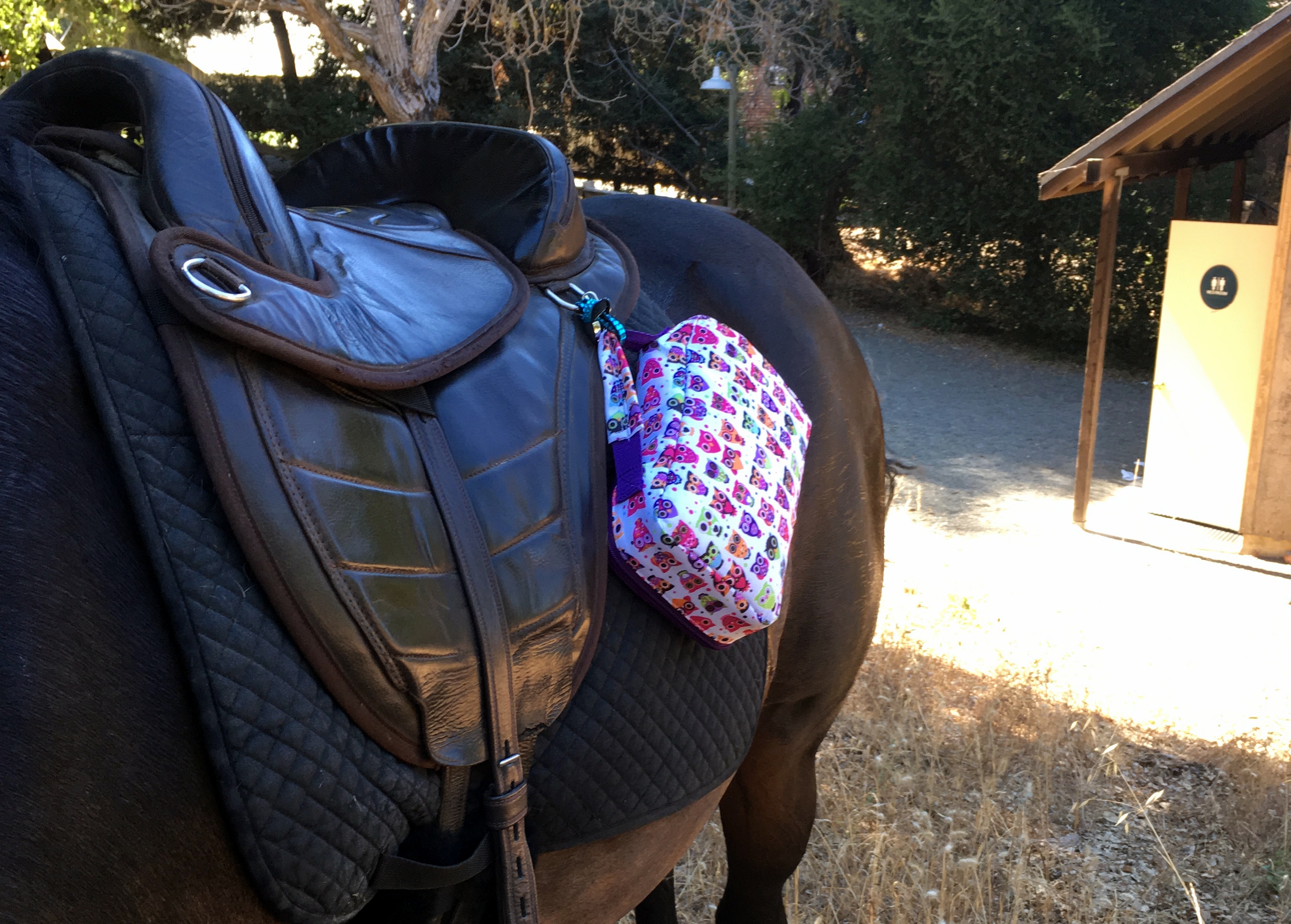 This is how professionals pack food, right?

I do love this little cooler lunch bag. It has lots of slots and compartments to keep all your cheese, crackers, and chocolate separate. And it comes with a built in ice pack to keep everything cool. Which comes in handy when it’s 95 freaking degrees out. 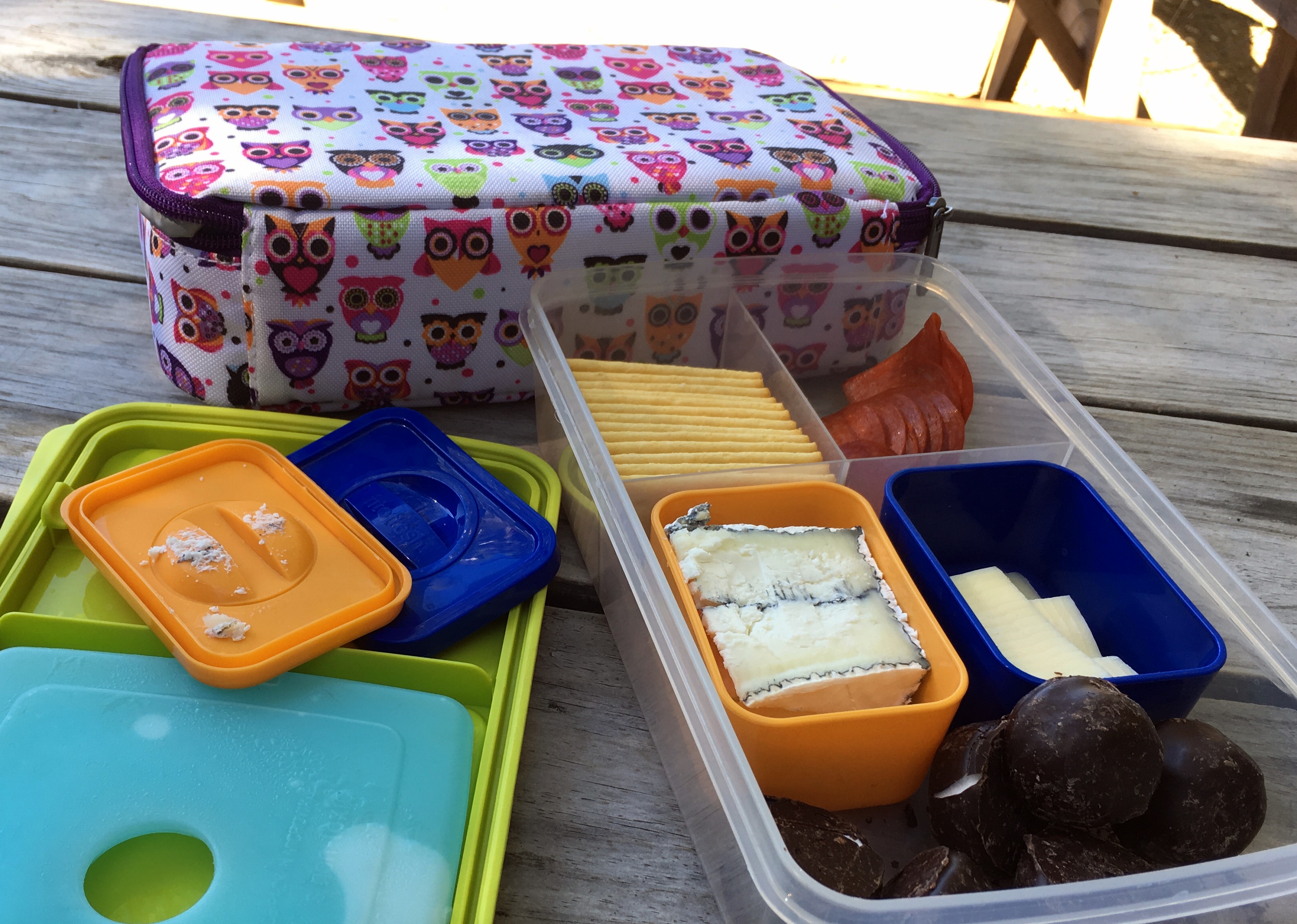 We did a wine tasting and then had a picnic at the tables outside the winery with a glass of wine. The wine tasting and picnic were a test to see how Eugene would do with being tied up as my husband planned to ride him to a restaurant on Sunday.

I’m in a few horseback riding meetups and one of them was doing a ride through Wunderlich to Alice’s Restaurant for lunch. The ride was a bit too long for Shasta’s current fitness level so my husband went without me. I met the group at the restaurant for lunch. My husband said that Eugene was great. He minded his manners and wasn’t bothered by riding with new horses or being tied up next to them. 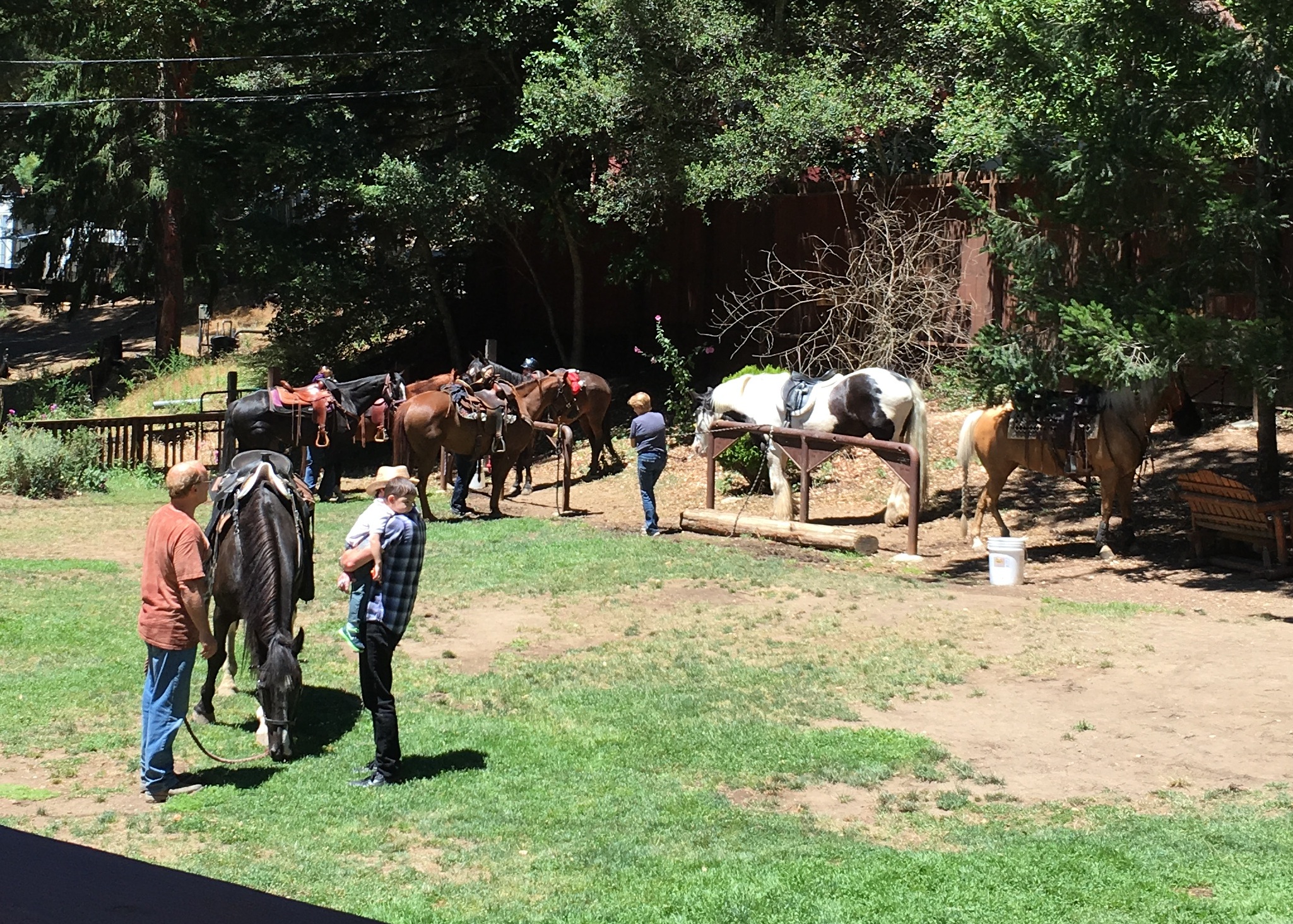 Eugene was even feeling so relaxed that he rolled with his tack on while tied up. My husband had to run over and re-tie him tighter. In the future we’ll take his tack off and just let him have a roll before getting tied up. I’m really hoping my husband and I can do this ride again sometime when I have a functioning equine. 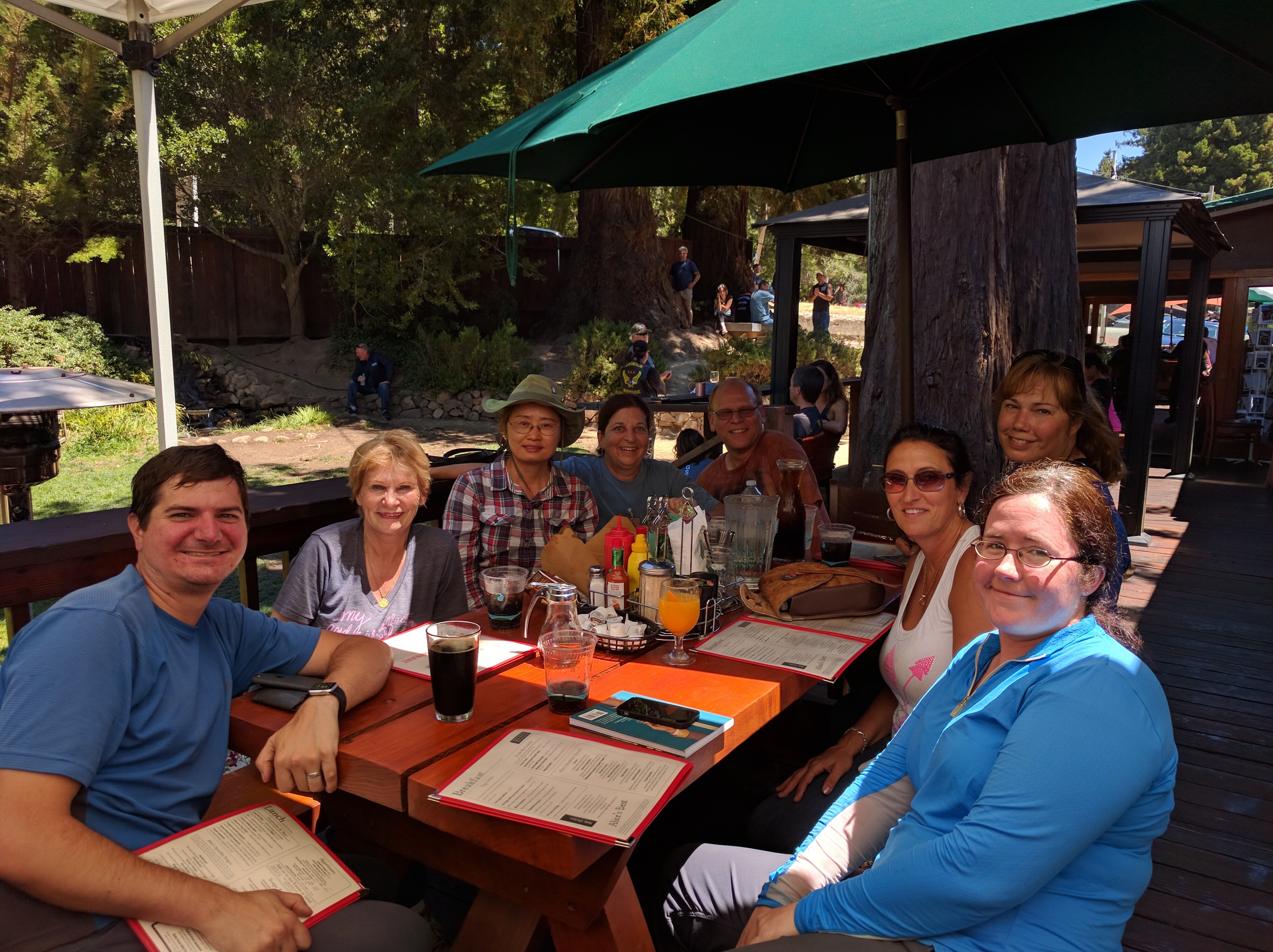 PC: The waitress whose name I do not remember

After the rousing weekend of Pokemon hunting and not really riding, I topped it off by not riding on Monday either. Instead, I dragged Nilla up to the arena to work on her ground tying skills. She used to stand pretty well if I needed to set jumps or poles, but she’s been getting progressively worse. Last week she just walked herself right out of the arena while I was setting some cones for my husband. So we had a practice session. 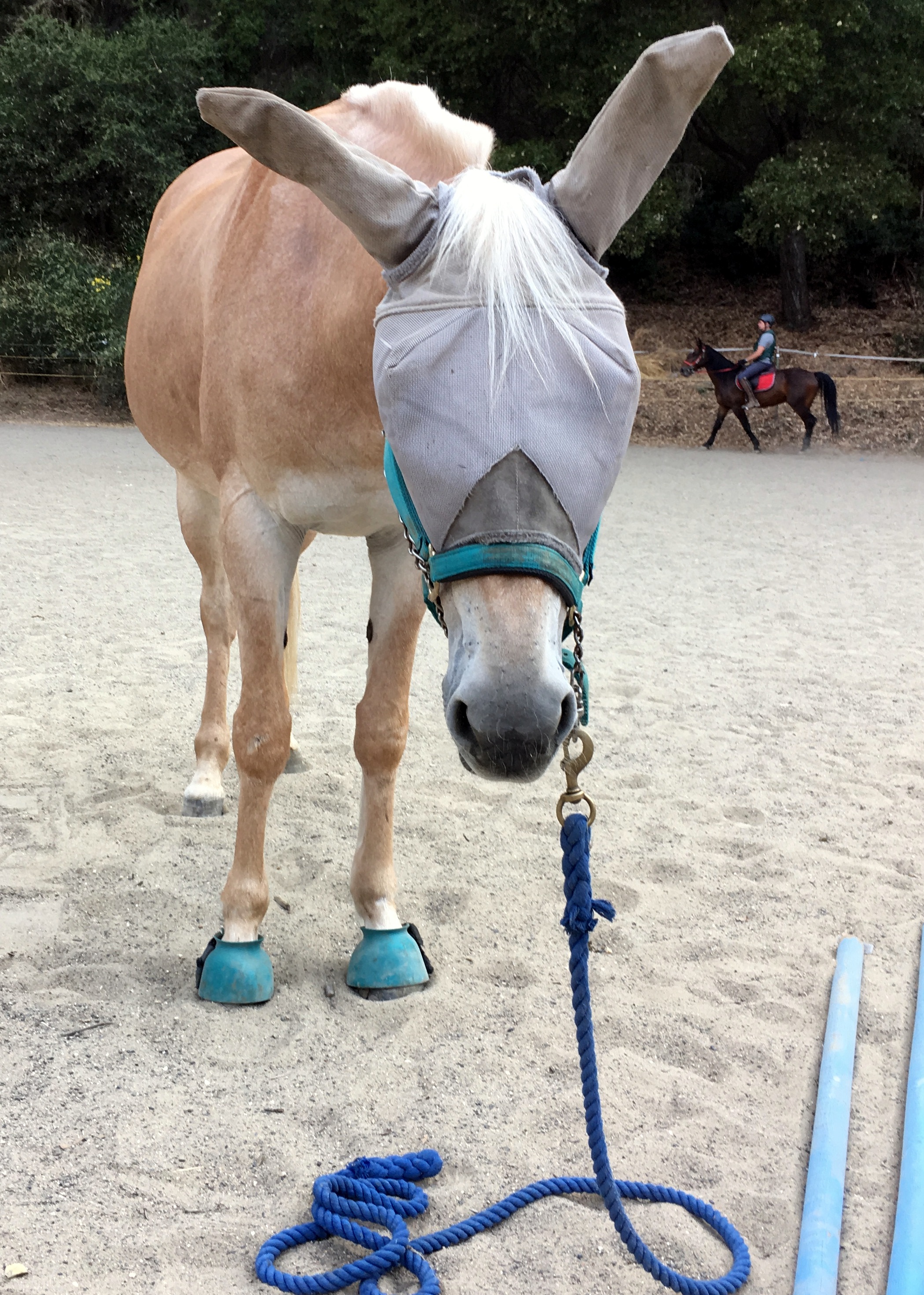 Watching the mule stand still was predictably boring (although I did have to frequently catch her and return her to her spot), so I started looking for other things to do.

Remember Nilla’s lizard phobia? I found a little baby lizard and put it on her. Officially not scary. 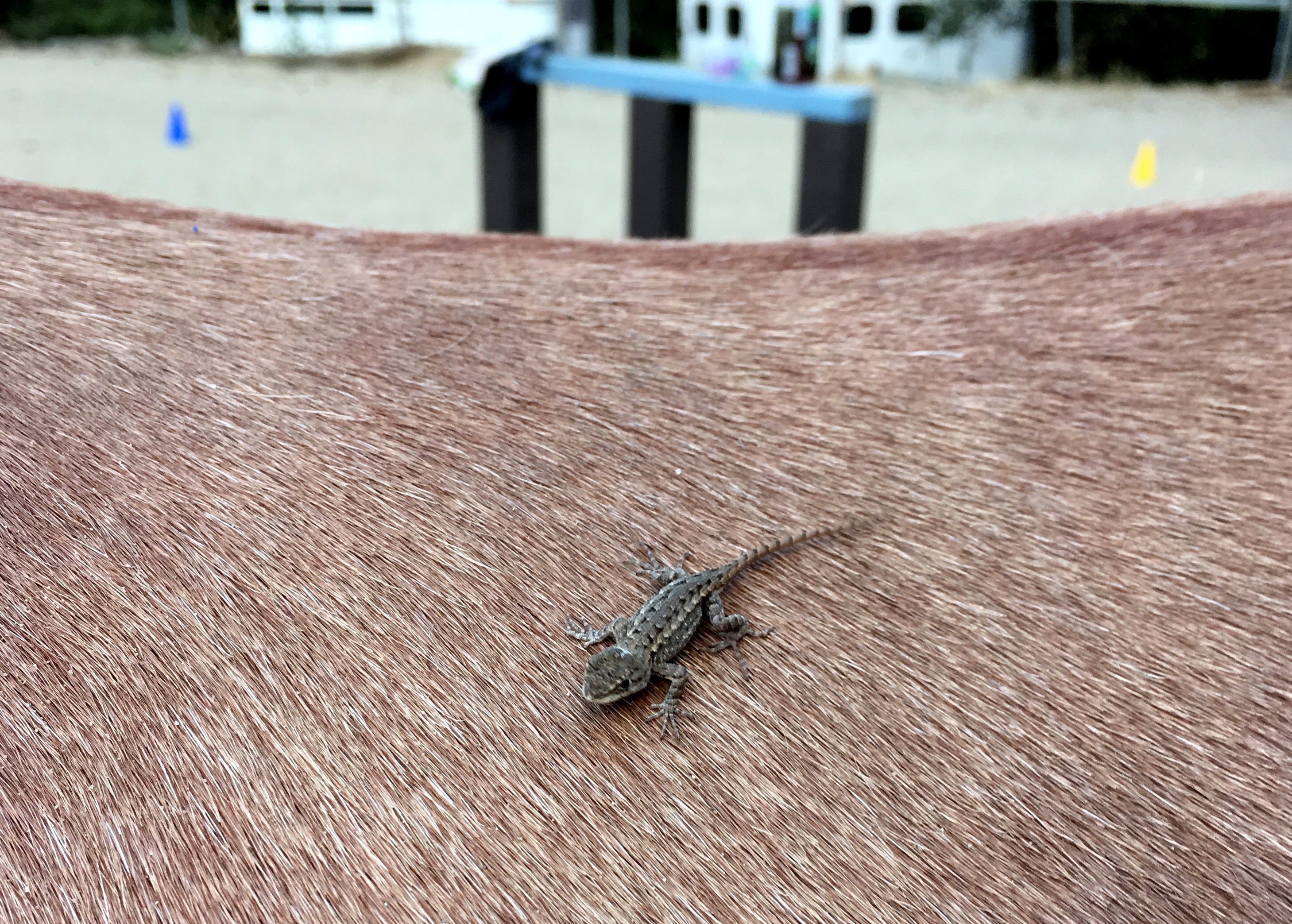 The lizard was returned to his hiding place in the jump standard and no lizards were harmed in the making of this photo.

Then I figured, why not see if Nilla will do some coon jumping. That’s what mules are supposed to be good at, right? Turns out she will. Although she was honestly pretty baffled as to why I wanted her to do this.

We’ll have to try some higher jumps another night.

What do you do with your horse when you can’t ride? And if you have any great girth gall healing tips, please feel free to share those as well.