When, I left off yesterday, Nilla and I had just finished dominating dressage. By which I mean we were in 7th out of 9. I actually didn’t know this going into Stadium because we were so rushed, there was no time to look up scores. After my dressage test, we ran back to untack Nilla while my husband got Eugene ready. Then I watched his dressage test at 12:53 and had to race to get Nilla tacked up and ready for Stadium at 1:40. By the time I got her tacked, got all my stuff on, and actually mounted, my husband was kind enough to inform me I had 7 minutes to warm up. Well, okay then.

We walked over to the warm up arena, trotted around a few times, popped over the X twice, the vertical twice, and then walked over to the stadium arena. Thankfully, Nilla had reverted from yesterday’s deer/demon hybrid back into a relaxed jumping mule and was being really good. 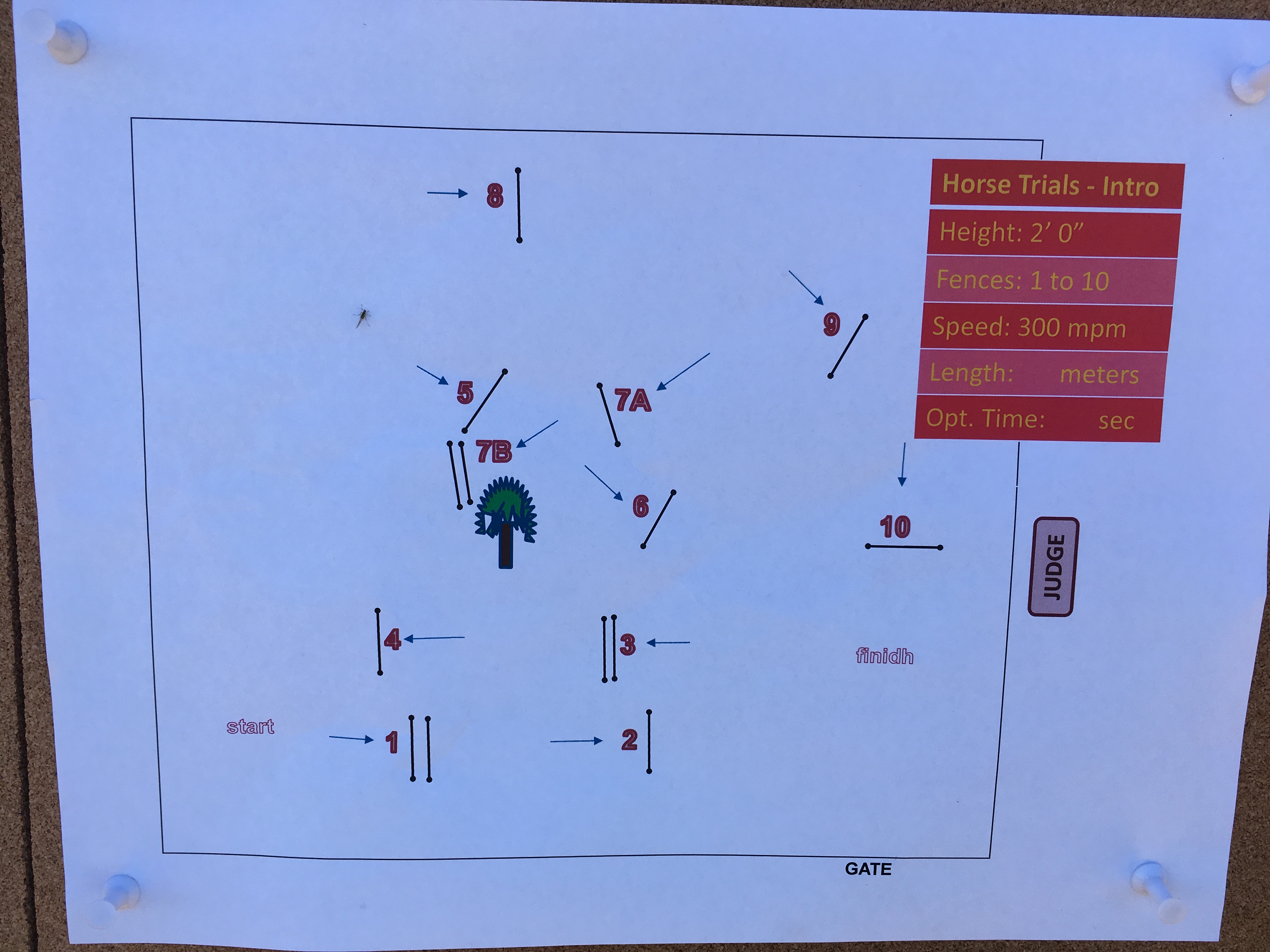 Also thankfully, we had walked the course before dressage. It was an interesting course. Sort of serpentining back and forth with pretty easy turns. The weird part was the jump choices. 1-2 and 3-4 were lines with the first jump as an oxer and the second as a very large cross-rail. I saw them out measuring and they were setting the center of the X at 2′, which makes for a much bigger jump. And they look a big confining and intimidating. Nilla doesn’t care. But I think it’d be a challenge for some horses. The most interesting part to me was the 2 stride combo at 7 ending in a tree. 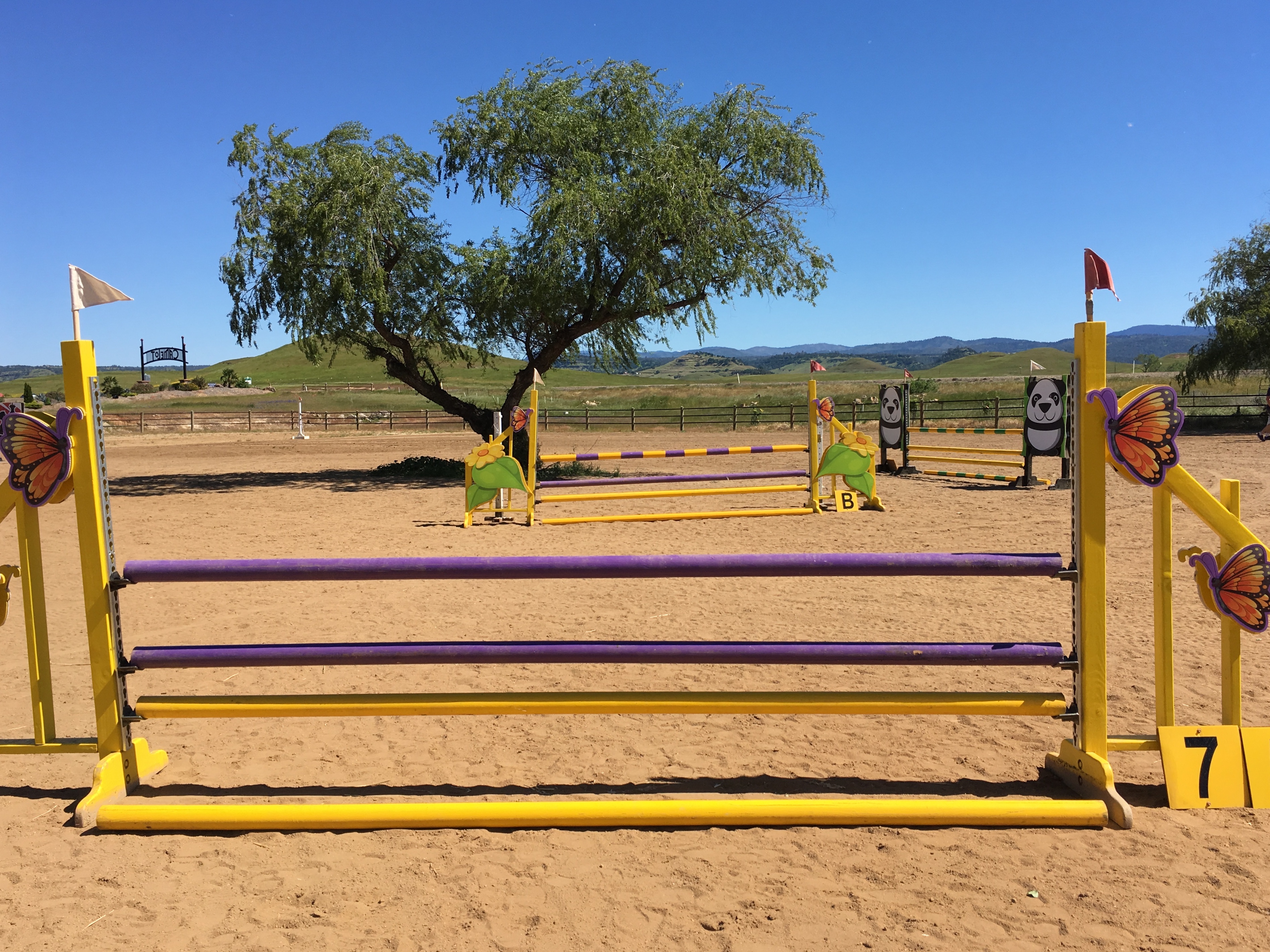 It looks like the tree is off to the side, but that bit that looks like a shadow right in the middle after 7B? It’s not a shadow; it’s grass and dropped twigs and stuff from the tree. During the actual round, the jump fixers were sitting behind the tree in the shade adding to the potential terror. I used my time after the bell to get Nilla over there and make sure she saw they were just people. I don’t think she cared much.

There’s not much to say about this course. Nilla was calm and quiet and listening. She jumped everything nicely. I took all the wide turns and really set her up straight instead of pushing my luck around any inside turns. The time hadn’t been posted so I didn’t even know what my goal was. I just went for all poles up. 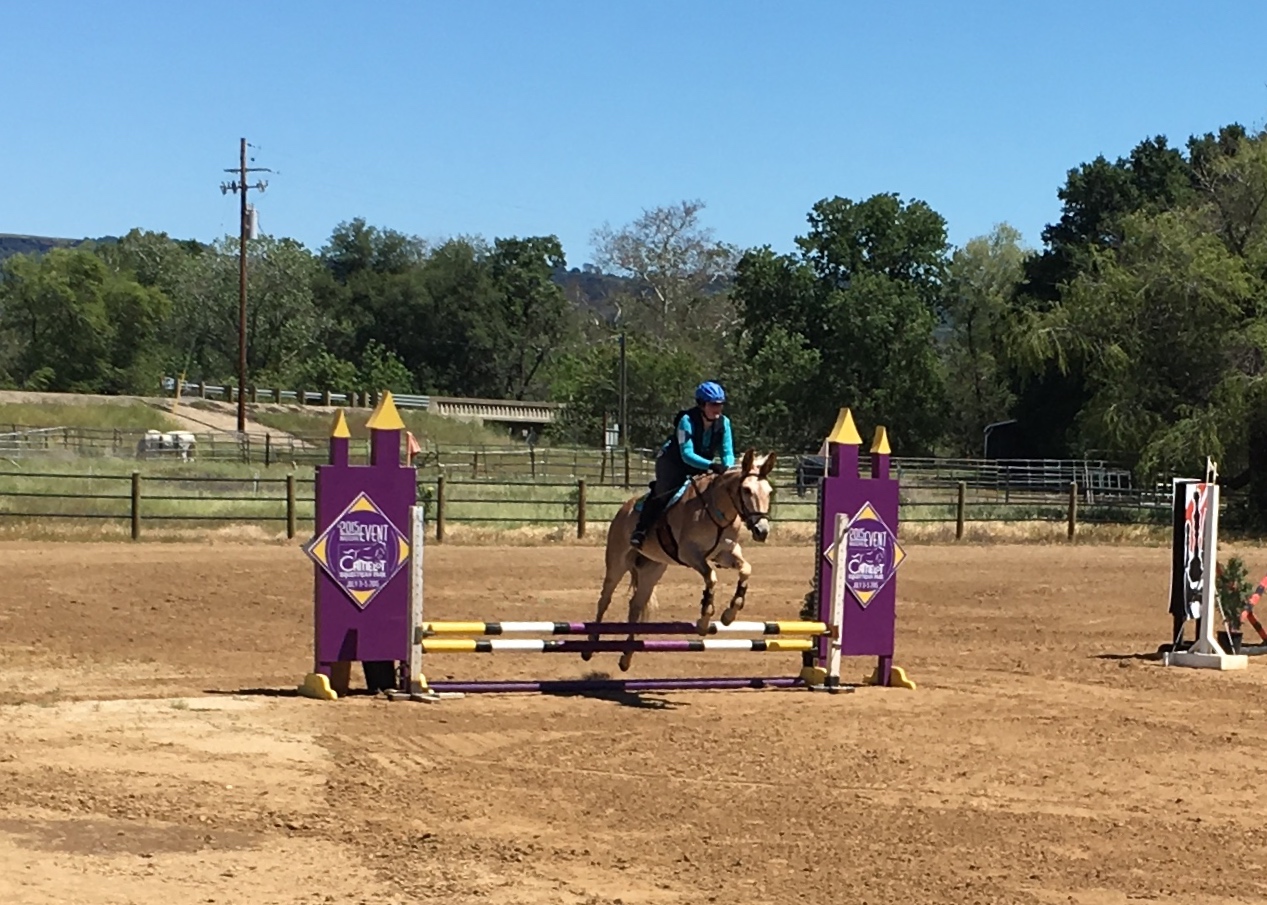 We had a hard tap at 7B. It walked as a 2 stride and Nilla put in 3. She didn’t even put in 2.5 or cram in a tiny stride; it was a solid three (tiny) strides. I don’t now if she was edged off by the tree and volunteers. Thankfully the pole stayed up. We were double clear. 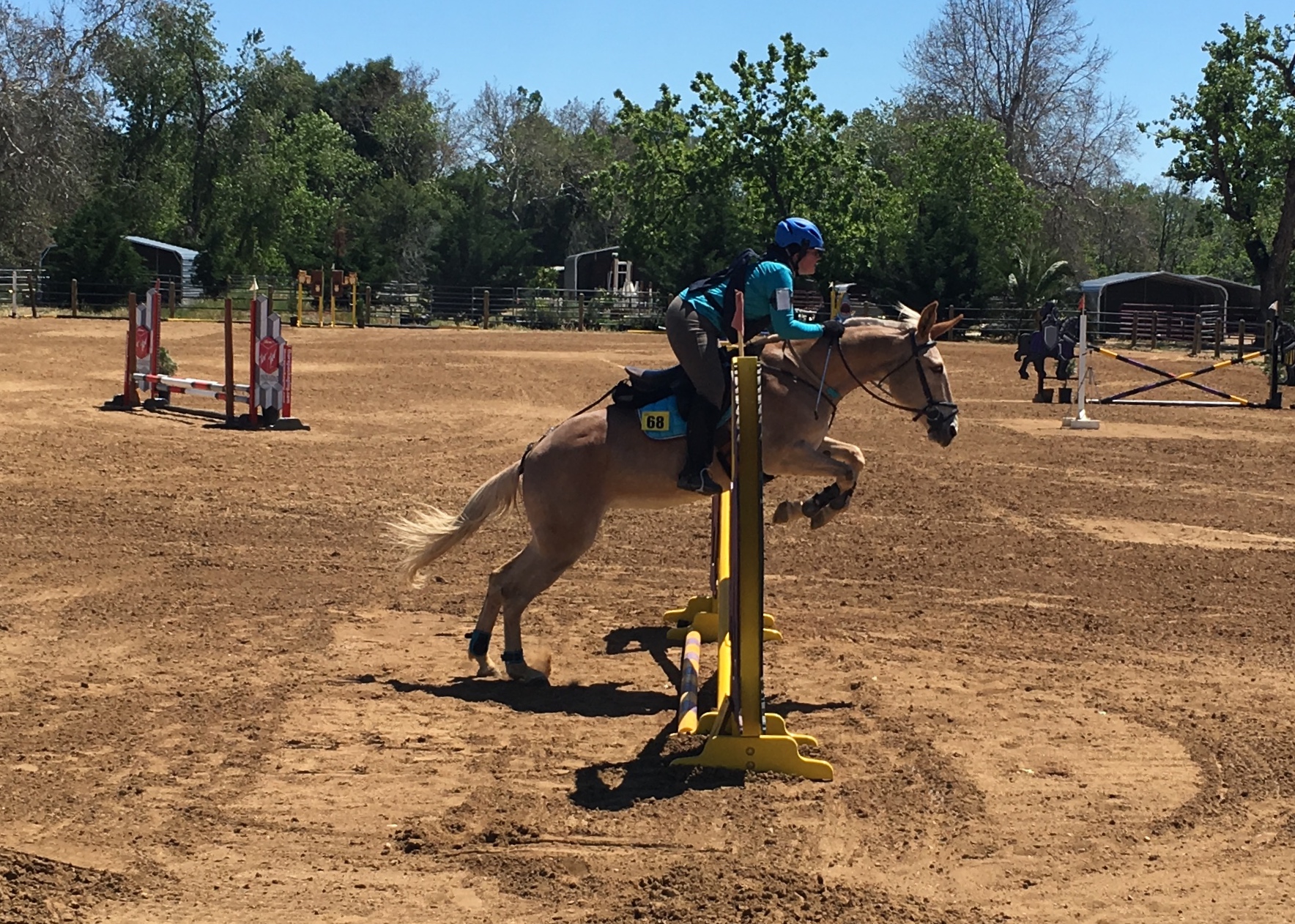 I literally trotted right from the finish line out of the arena calling thanks to the gate assistant and trotted over to the truck to grab my vest and pinny for XC. I was first for everything and had like 10 minutes between stadium and XC so I didn’t get to see anyone else go. I figured Stadium was warm up for XC so I didn’t do any more jumping. I just waited for my turn sucking down an entire bottle of water because oh my god it was so hot and dry in the desert. 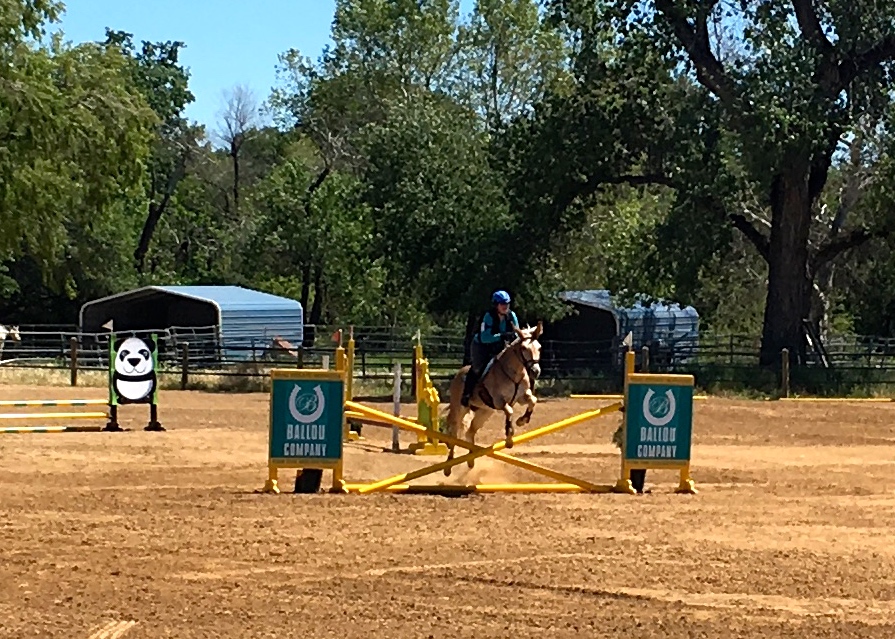 Then it was XC time. A lot of the jumps were the same as last time, but in different order and different places. Although the jump heights were pretty low due to it being Intro, I really appreciated the variety of the jumps and that they asked some harder questions. Here’s a link to my coursewalk. 11 and 12 are not actually next to each other, I forgot to press save on 11. It was back near 10.

My biggest concern with this course was that it crossed it’s own path a few times. Nilla’s very herd-bound and I was worried she’d see another horse and decide she was going that way and f**k me and anywhere else I might want her to go. We have had this happen on trail rides, so it’s not an irrational concern. Thankfully being first meant we were out there alone for most of the course and we didn’t have any issues.

I don’t have any pictures of us doing the jumps, but I do have helmet camera footage. After Nilla broke the previous camera, I got a new one and didn’t think to test it’s alignment before this. It’s unfortunately skewed, but it’s functional.

Nilla had reinstalled her brain and we had a lovely trip. She jumped everything nicely and was really well behaved. The main issues we had were her wanting to go back to the warm up where all the other horses were. You can see her trying to drift off to the right towards them after 1. Then she landed from 15 and tried to bolt back to them. You can hear me yelling at her because I was not going to get eliminated 10 yards from the finish line. She was going through the damned finish. And she did, but nothing is every as easy as it should be.

If you watch the video, you’ll notice me looking at my watch constantly. This isn’t normal for me and I’m really not that obsessed with my time – especially at intro. I was testing a new watch app that allows you to see not just your total time, but how many seconds until your next jump. It’s still in beta so I was having some difficulty with it. I didn’t actually get it to display at all until like jump 11 and then I was over checking it because I wanted to see how well it worked. Once I got it working though it was so cool. I can’t get a decent screen grab from the video, but there are three things displayed. Your time (just like a regular stopwatch), your time in seconds until the next jump (example “13: 12 seconds”) and an average M/M. The M/M isn’t working yet and I think we might scrap it entirely if we can’t fix it easily. Just being able to see your time to the next jump is great. Readers, feel free to weigh in if you think the average speed is something you’d want to see. I just stopped even looking at it since it was wrong. Maybe I’d like it more if it had been working. I was really happy with the app though. We still need to make some fixes, but I’m excited about it so far. 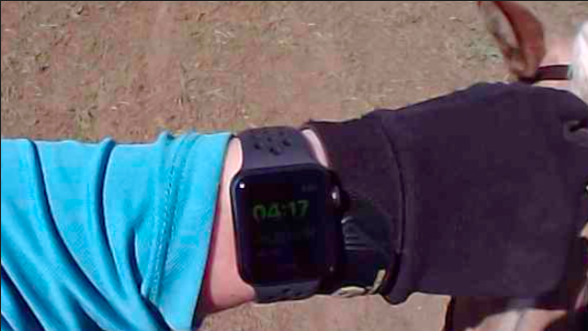 You know what an app can’t solve for you though? Stupidity. Remember last time I was at Camelot and I messed up thinking optimum time was somehow the minimum time and I was really mad about it? And readers were all like ” don’t worry, mistakes happen, you’ll never make that mistake again.” Ha ha, you underestimated me. I can apparently make that same mistake again. I managed 2 time faults. Next time, I am embroidering “GO FASTER” on my glove. Ugh.

There was one rider fall in Stadium, which moved me up to 6th going into XC (again we learned this after finishing XC). I know there were no refusals or other penalties on XC so I figured I was probably stuck at 6th, but I was still excited because at least we were in the ribbons. Then everyone had time faults on XC. And I mean a lot of time faults. When I saw the change, I told my husband: “OMG, we moved the f*ck up.” Nilla and I moved up to 3rd and Camelot gives prizes through 3rd so this was a pretty significant move up.

The couple that shows together stays together. #horseshow #eventing #horseblog #couplegoals

I ended up 3rd and won the bottle of liniment. We go through a lot of liniment so I was excited about that. I’ll post about my husband’s adventure’s tomorrow.