Over the Christmas break, my husband and I went on a cruise to Mexico with my parents. I actually really like cruises because they force me to relax. Most of our vacations are rather intense (like our road trip through the Southwest to the Grand Canyon) or horse camping in the Redwoods or Yosemite. I love those trips, but they’re not relaxing. In addition, the cruise ships don’t have internet, so I can’t spend the whole day idly browsing the web. I actually get some books read, eat tons of food, and spend as much time as possible in a hot tub and generally relax.

Being an equestrian, I seek out riding opportunities wherever I go. I’ve been riding in Mexico before and it can be a little questionable. Some places take good care of their horses, but others have really starved horses or put people on 2 year olds or little ponies. You never know what you’re going to get. For this trip, I browsed Tripadvisor and found a place called Maria’s Happy Horses in Mazatlan. The reviews were good and the horses didn’t look horribly abused in the pictures, so I signed us up.

Just getting to the horseback riding was a bit of an adventure. The cruise ship termimal is in the middle of a shipping dock so we had to take a Mandatory Tram ride through the shipping containers stored at the port. 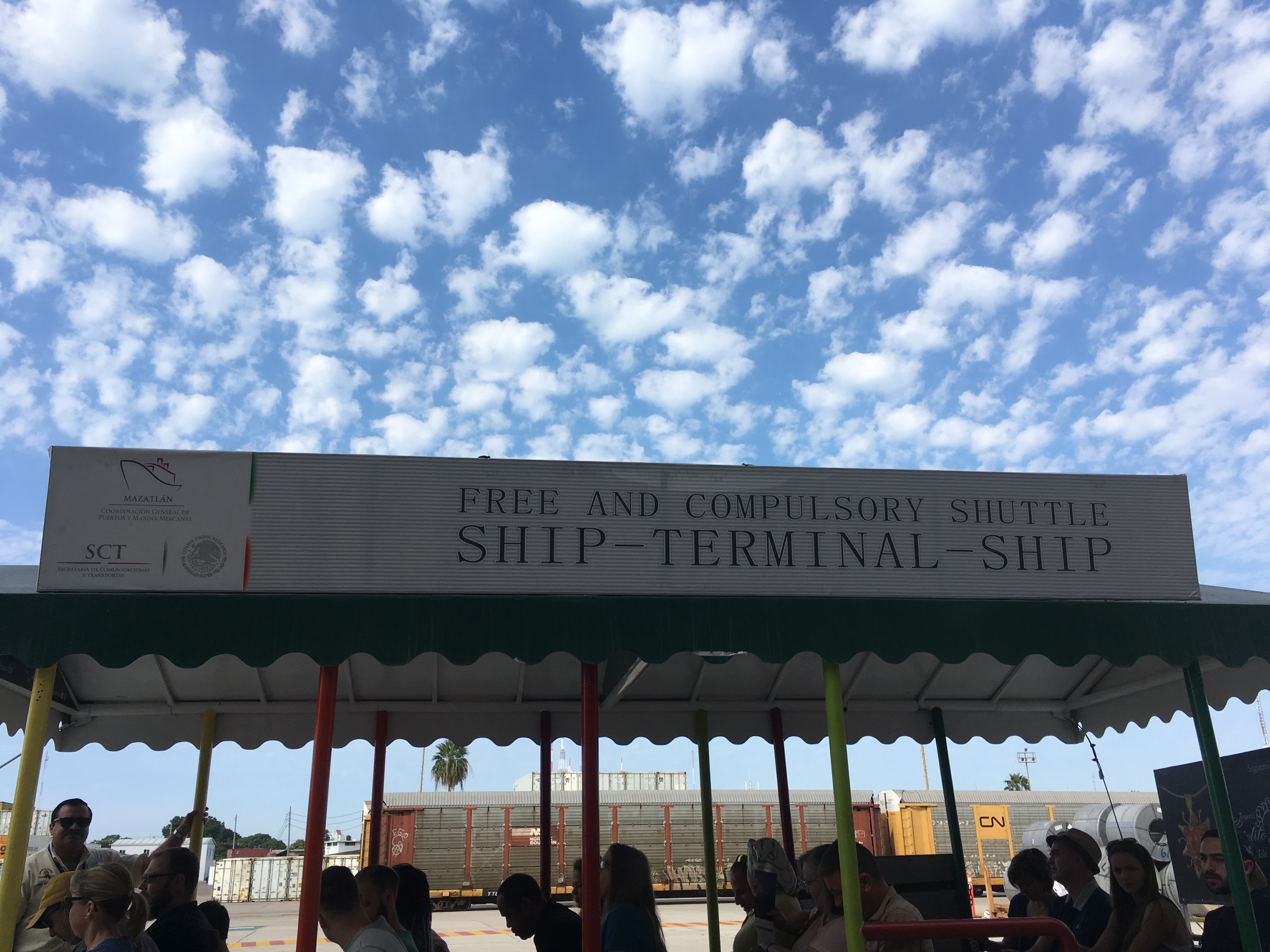 Just how I like my activities: free and cumpulsory

Then we took an “open air taxi” (basically sitting in the back of a pickup truck) to get to the dock. 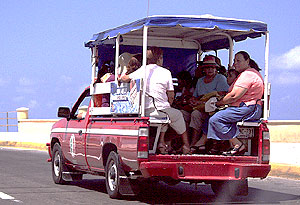 The dock looked like a scene from Slumdog millionaire. There were all sorts of shacks built overtop an abandoned railroad track and the ferries were just boats with a tarp roof. I forgot to take a picture so here’s one from Mexican Port Reviews: 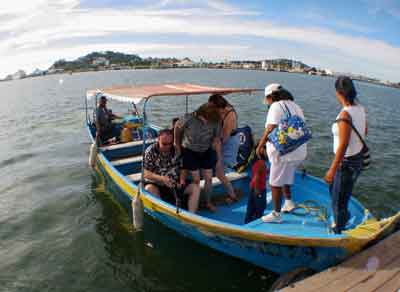 From there we took another pickup truck taxi (this time we crammed 14 people into the back of a pickup so that was fun) to the beach. The horses were all tacked and waiting. While the guide who had met us at the terminal spoke English, the guide running the ride did not. And my Spanish is incredibly limited. The guide started by asking us how much we ride and my husband and I answered “mucho” and the english guide came over saying we were “los vaqueros.” And I was like, well, sure, but I really don’t want to die. I really didn’t want to ride something challenging. Especially given the lack of helmets.

Sidenote: I’m the ultimate helmet nazi. Hell, I don’t ride without a vest, let alone without a helmet. I took my helmet to the Grand Canyon, I’ve flown it to Wyoming and Ireland in the past. But, there was no helmet option here so if the sight of people riding without helmets offends you, skip this post.

Thankfully, we were assigned two nice horses who did not try to kill us and were very forward and sensitive. My horse, Palermo, came complete with this awesome saddle horn: 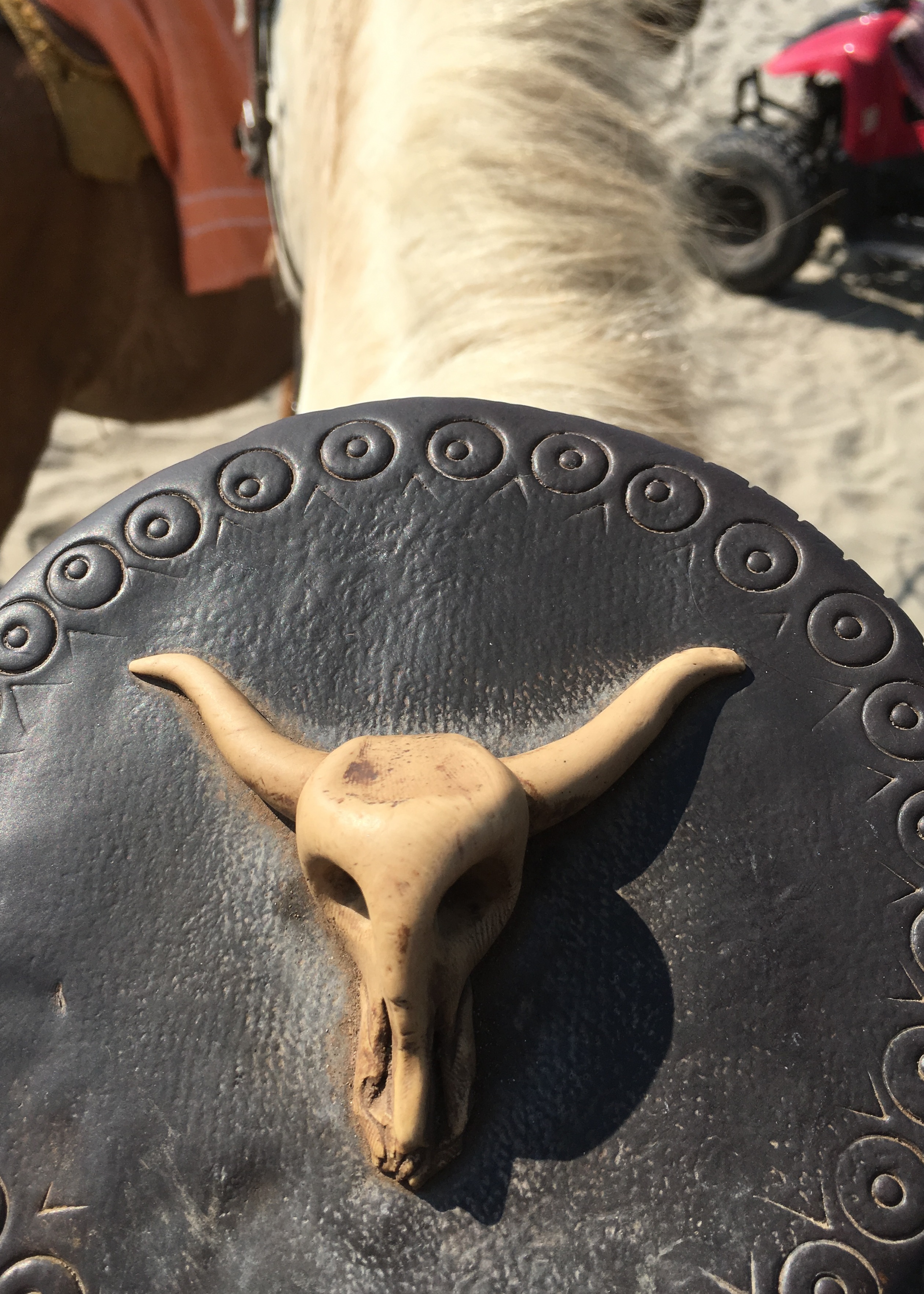 All of the horses looked pretty good. None were starving or obviously injured. Some had rather unfortunately conformation, but they were all in good condition. Palermo and my husband’s horse, Rubia, were both tall and not too narrow. 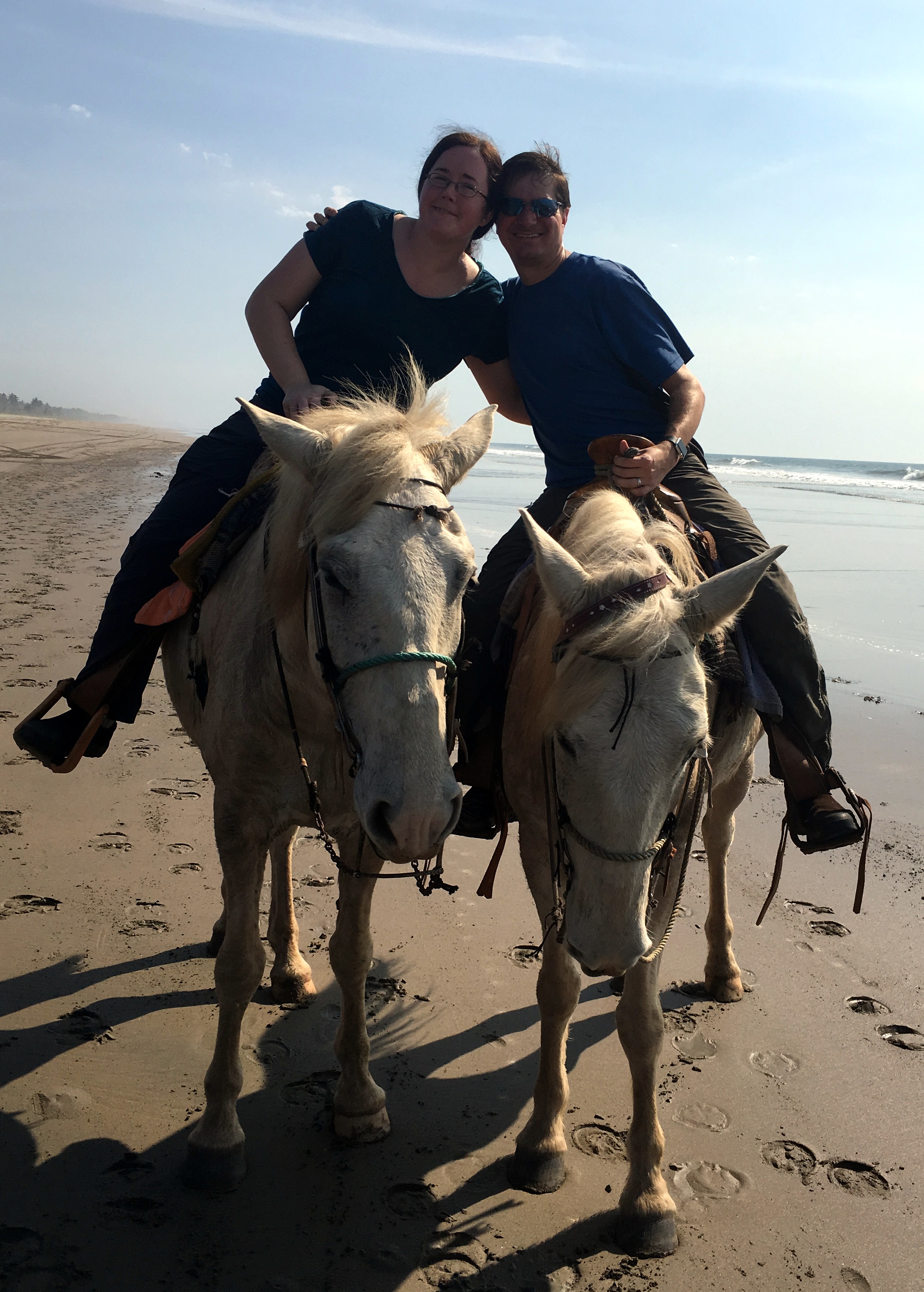 As I mentioned, our guide spoke about as much English as I spoke Spanish and it was a bit hard to communicate, but he was a cool guy. He let us canter down the beach and our horses were comfortable and easy to ride. They really moved forward and we actually had to hold them back for most of the ride – even on the way out. 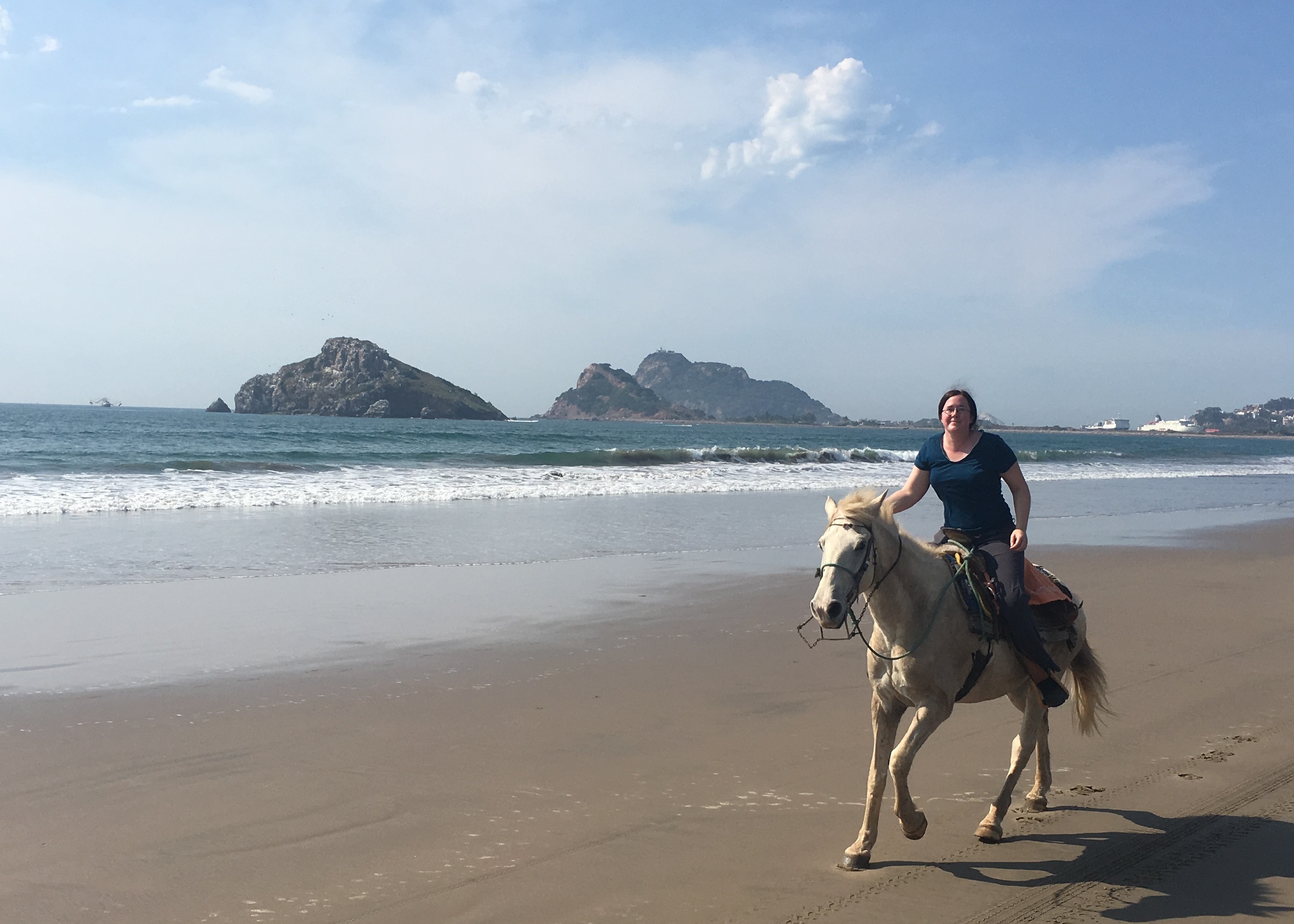 My mom hates riding and was walking as slowly as possible and bringing up the rear with the English speaking guide who brought us over from the cruise ship. At one point, I cantered back to check in with her and took this bouncy video. They really had a wide selection of horses. Fast and responsive ones for the good riders and slow packers for people like my mom.

As we were heading back, one of the teenagers in our group was having trouble getting his horse to slow down. He also didn’t speak Spanish so I was trying to act as translator, which I thought was hilarious. I was like, “No quirre mas rapido.” I told you my Spanish is bad. I would definitely die if left alone in Mexico and needed to actually converse with someone. But this worked well enough. The guide ended up switching horses with the kid and then proceeded to put the reins down and ride with his hands out telling us “no problema.” I think he really liked us since we knew horses and wanted to joke with us despite the language barrier. 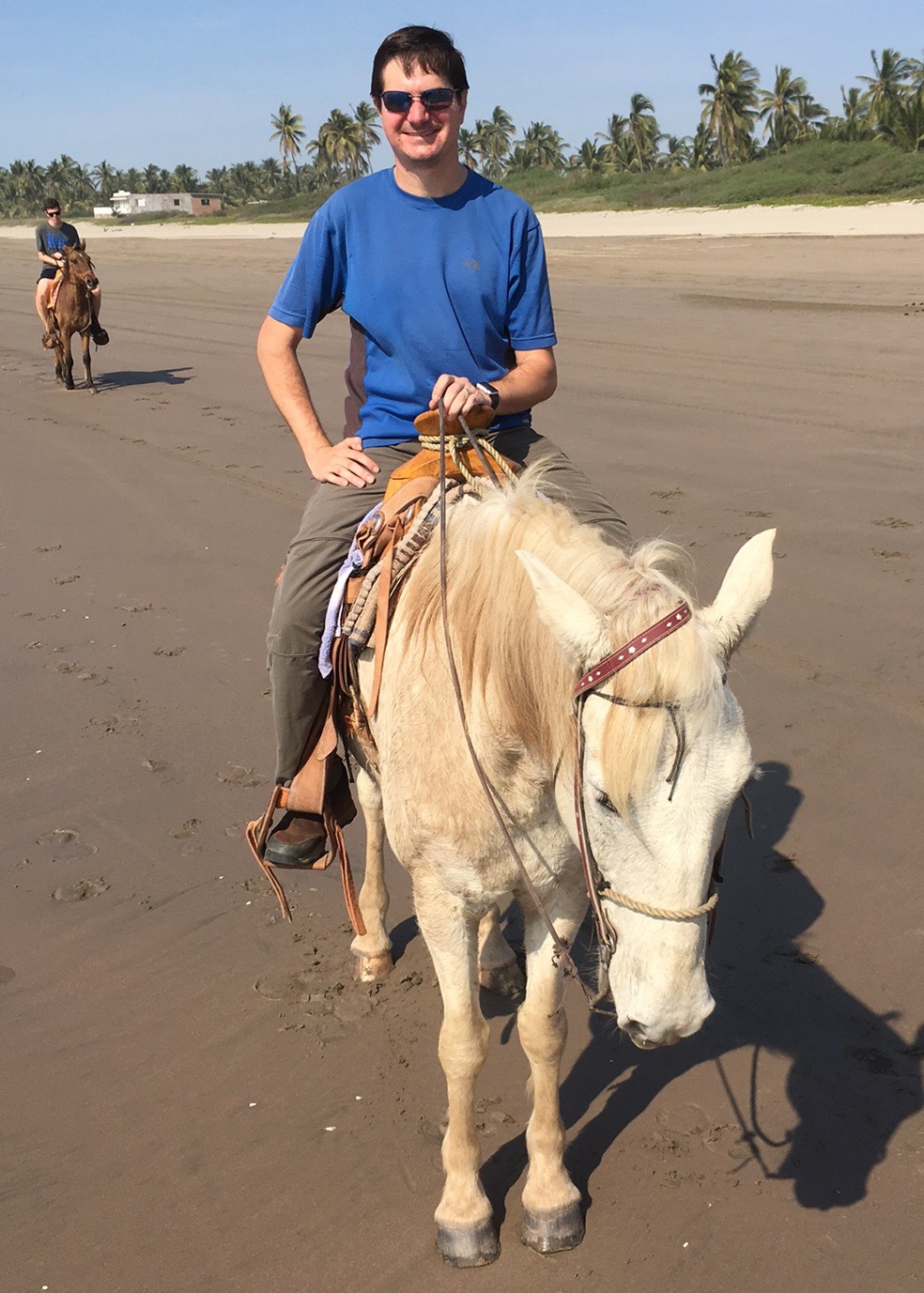 Once we got back to the start point, we all stopped at a restaurant for a drink. I got a Coke because I don’t really like alcohol and I love Mexican coke. Beer, coconuts, and tequila were also an option. Finally we headed back to the cruise ship with the same collection of “taxis” and “ferries.”All around, it was a great trip and it only cost $35 each. For all the transportation, a one hour ride, and the included drinks. 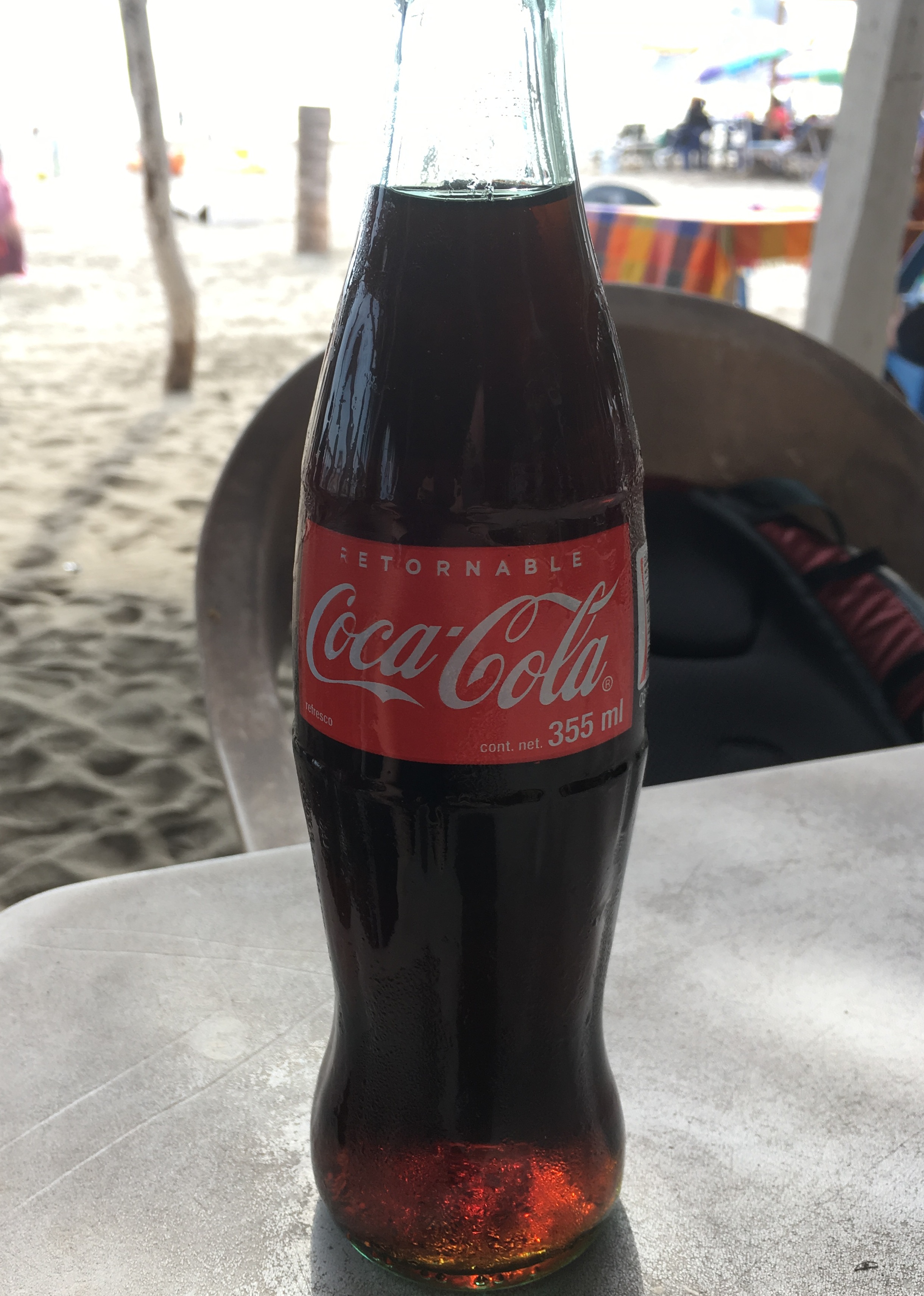 Needless to say, this trip was not booked through the cruise line. And that’s really the secret to cruising: book everything independently. The best tours I’ve been on have been outside of the cruise line. I have been tubing down a river through caves in Belize, kayaked to an abandoned WWII military sight in Alaska, had a private tour of Ephesus in Turkey, and so much more. If you’re going to Mazatlan (whether on a cruise ship or on your own), I highly recommend Maria’s Happy Horses on Stone Island. 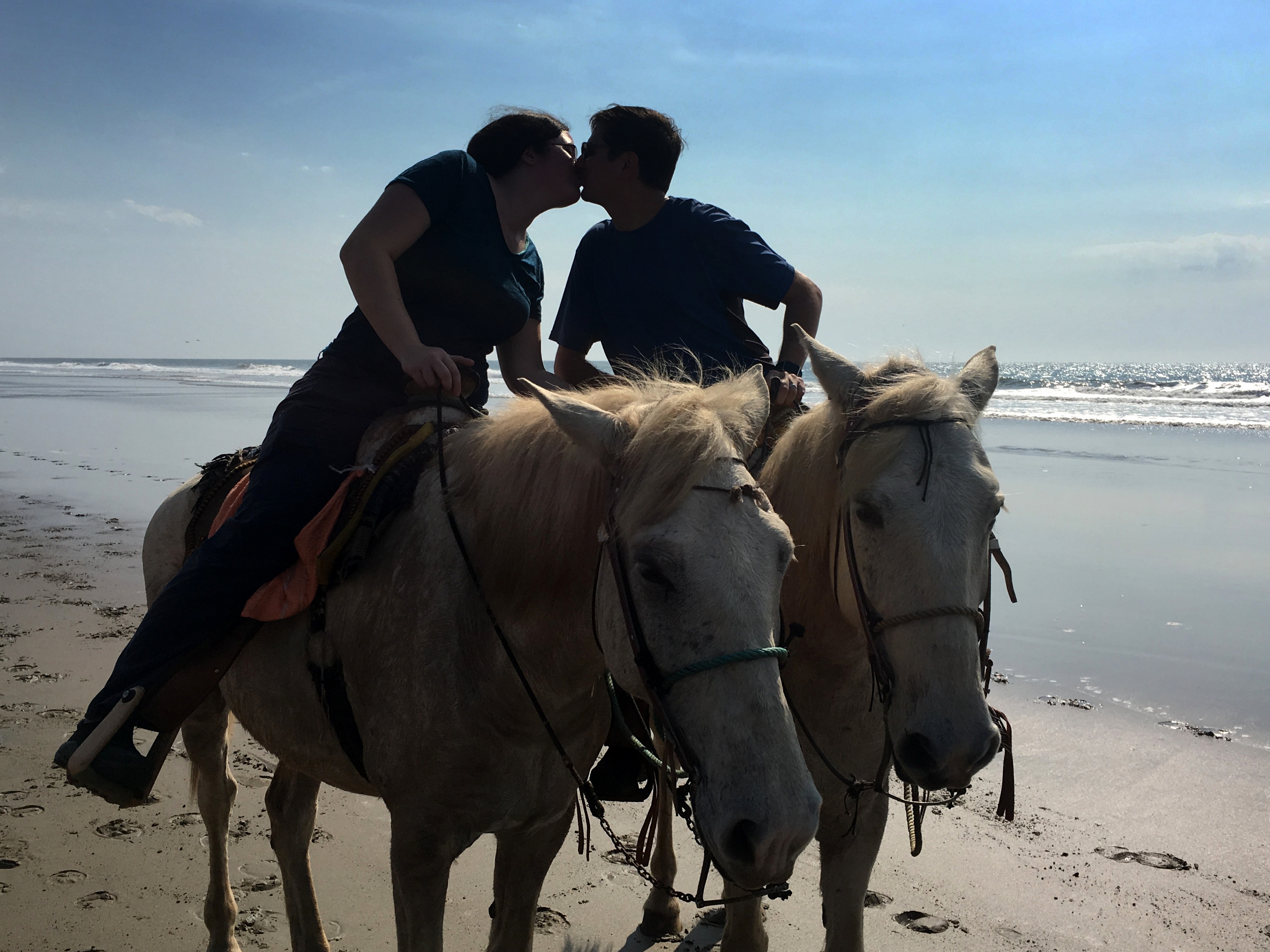 20 thoughts on “Horseback Riding in Mexico”