This weekend we took Eugene to D’Alanzo for another schooling show. Eugene has really been coming along with his show nerves so we’ve backed off on going to so many H/J shows, but Kate was going with some of her students and my husband wanted to practice some full rounds at height so we figured why not. Jumping was scheduled to start at noon, which meant we could sleep in a bit and get there at 11.

They ended up not starting the jumping until 12:30, but that wasn’t too late and it gave my husband time to clean his boots.

Me the night before the show: are your boots clean? Husband: Yes. At the show: cleaning boots in the truck before the class starts. 😂 #imalwaysright #horseshowlife #horseshow #horselife #equestrianlife

Since my husband entered the last classes of the day, we knew it would take a little while even after jumping started, but we got Eugene tacked up and hand walked him over to hang out and watch Kate and her students riding. While it was fun to hang out with Kathy and Kate’s group, it was freaking cold. I know everyone in the rest of the country is like, “duh it’s winter, it should be cold,” but you’re wrong. That’s not what it’s like in CA in the winter. It’s been sunny and in the 60s/70s around here. When we left our barn it was sunny and warm. As we drove over the pass into the central valley, we entered the fog and never saw the sun again. It was in the low 50s, damp, and chilly. None of us were prepared and we all sat around complaining. I ended up wearing 4 layers and curling up with a horse cooler by the time we got out of there.

We also got to complain about it taking forever. One of the things I like about these shows is that they run them like a machine. Last time we went, we did the jumping classes and we were home by 3. This time was more typical hurry up and wait and we didn’t even enter the ring until after 4.

My husband did the Handy Hunters 2’3″-2’6″ for a warm-up round. The ground was a bit sloppy so they didn’t do any of the handy turns, but they ended up going clear and getting 2nd out of 4. Just going clear is a pretty big improvement for Eugene who generally likes to casually strew poles about. He’s really come a long way in the last few months. 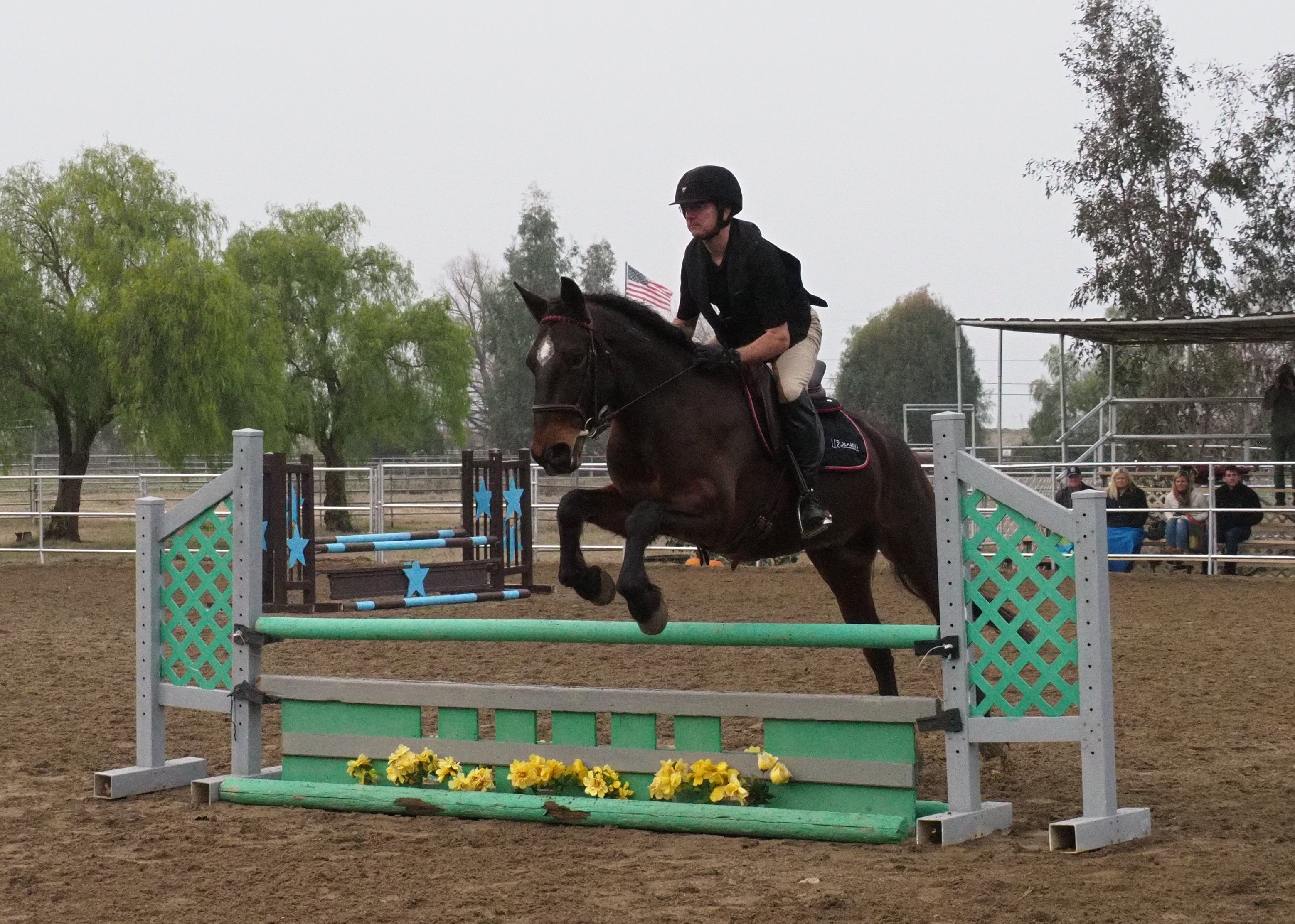 They skipped class 48 and their next class was 49 – Low Hunters Open 2’6″. Because it was so late, the sun (still behind a thick layer of fog anyway) was rapidly setting and in the time between classes 47 and 49, the light went from what you see above to this: 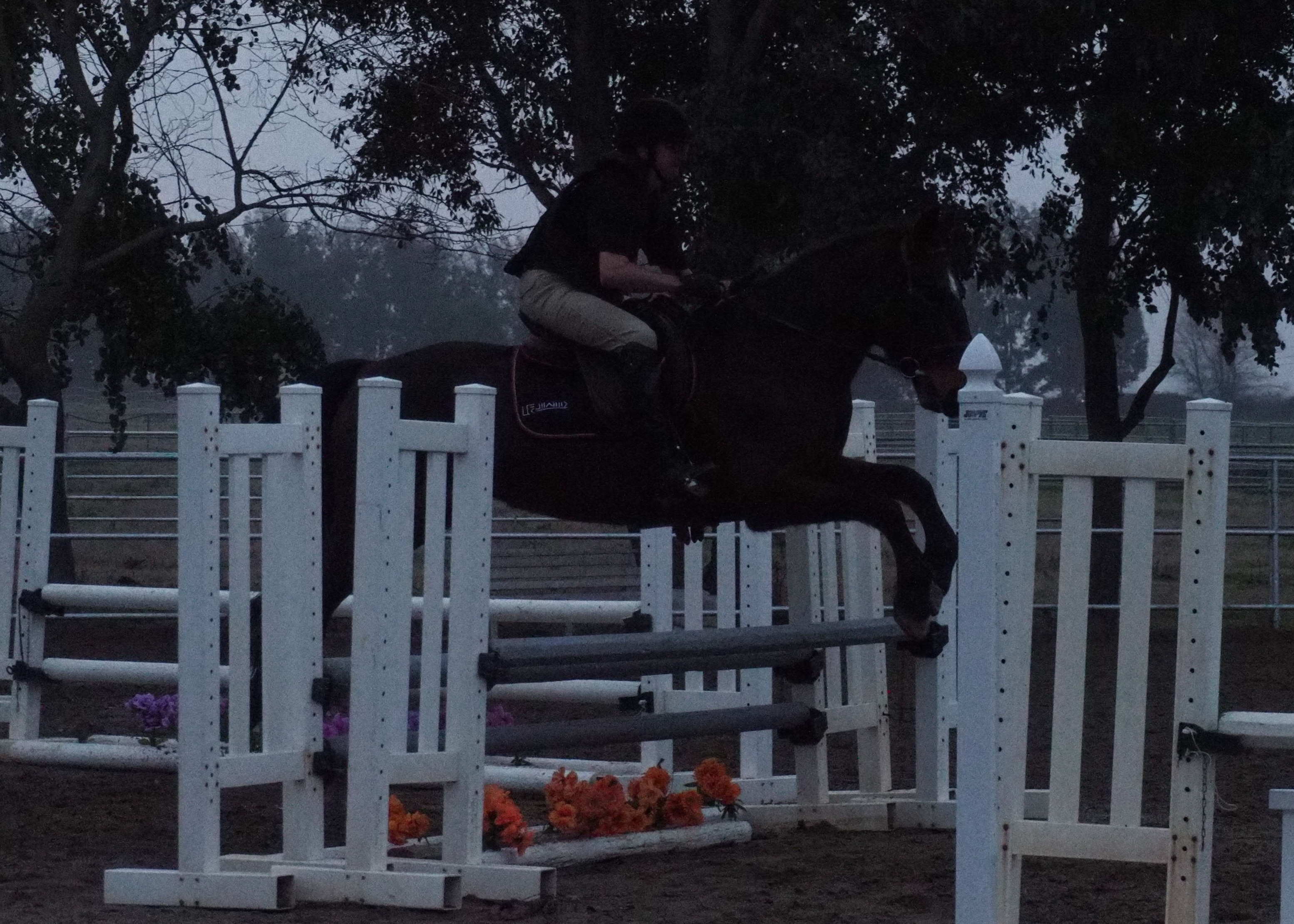 It actually didn’t feel that dark yet, but the camera couldn’t pick up enough light to get decent pictures. They went clear and got another 2nd (this time out of 3). Eugene was going really well; eager, but well behaved and listening. His biggest issue was being really squirrelly to the jumps, but he was getting over them clean. Given that they lost to a former Olympian who was there schooling some green horses, I’m gonna say 2nd was pretty good.

For the next class – Kindergarten Jumpers – 2’6” – my husband recommended I take a video instead of pictures since the light was going. It took me until about half way through their round to figure out how to get video mode to work since I’ve never used it on this camera. There were quite a few eventers at this show – including the former Olympian and her clients – using the show for schooling. They asked if this class could be raised to 2’9″ and everyone entered agreed. My husband really wanted to do the higher heights as well so he was happy.

I thought Eugene might knock some poles at the higher height, but he went clear. It was Argentine (closest to optimum wins) so they ended up 3rd out of 5.

Ribbons are fun and all, but the whole going clear thing is the real success. I honestly never though this horse would learn to pick up his feet so well. I’m very impressed.

The next class was supposed to be Green Jumpers 2’6″ Open, but the jumps stayed at 2’9″. Unfortunately, by the time they got through everyone in the previous class and then waited for some unknown reason, it was really dark. 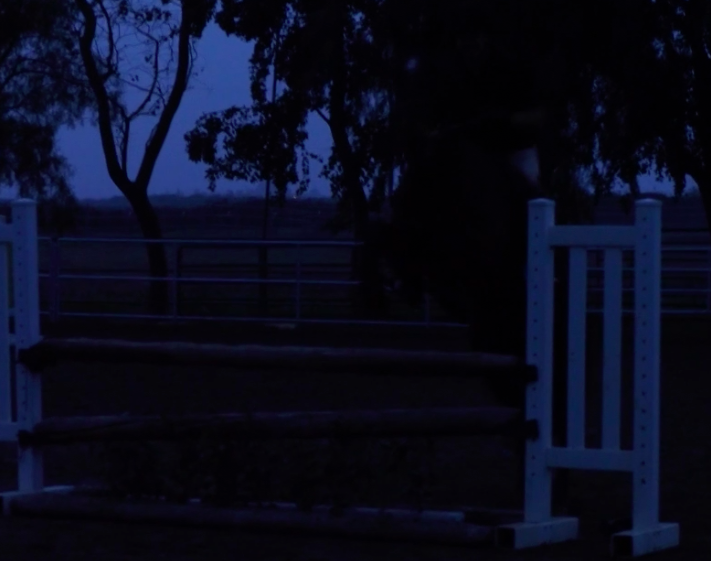 I swear there’s a horse in there. Look for the star.

Like really dark. My husband had already decided to scratch his next class and end on this one, but we probably should have just quit while we were ahead.

It was just too dark at this point. Eugene knocked into 2 of the jumps. Being tired from the previous rounds might have contributed, but I honestly just got the sense that he couldn’t see the jumps. The girl who went after my husband ended up pulling up half way through her round and quitting. Two other girls went after her and aced their rounds though so some people can manage the dark. My husband ended up with 4th out of 4 for that round. The placing isn’t the point though. Eugene went in there and tried. He’s such a good horse; he’ll jump anything my husband tells him to even if he can’t see it. 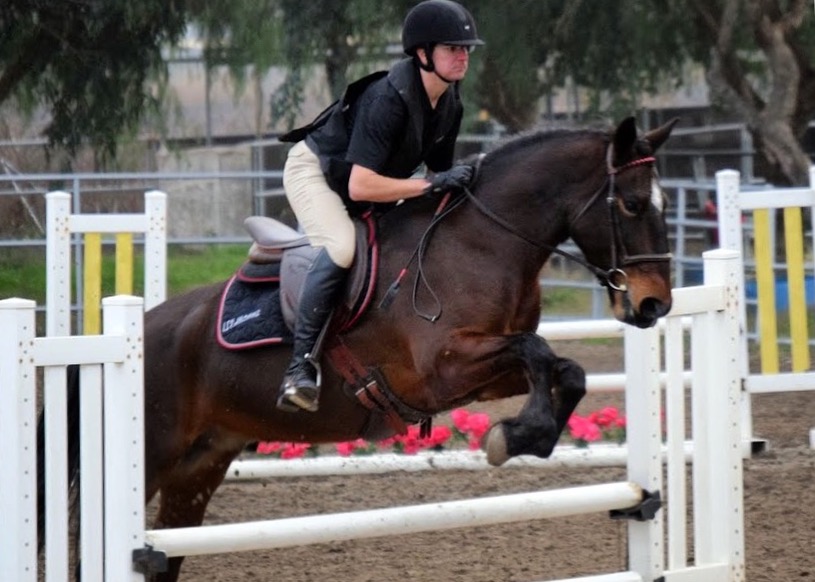 25 thoughts on “Jumping in the Dark”