On Tuesday, I hauled Levi out to meet our farrier to get his fancy new sneakers tacked on. This whole trip turned out to be a bit more frustrating than I had anticipated when the truck once again refused to start. See, we never actually bothered to take the truck into get fixed after it wouldn’t start in December. We got it towed home and then a few days later called AAA out to tow the truck to the shop. The AAA guy climbed in and the truck just started right up. Damn. I guess we should have tried that. We know the problem is with the starter and the recommendation for a quick fix is to hit the starter with a wrench or a hammer. That didn’t work when we were stuck at the lesson, but I’m guessing the towing process jolted everything around enough that it started again.

It’s been starting since then and, while I knew the truck still needed to get fixed, I had been lulled into complacency by my laziness. The truck actually started when I first got in at the trailer’s parking spot. I pulled it down to the barn, turned it off to go get Levi, loaded him up, got back in and… nothing.

To make this extra annoying, I’d parked the truck and trailer across my car so I couldn’t get the car out either and there’s no cell service at our barn.

Hoping a good bump would get the starter to engage again, I took the parking brake off, then let my foot off the brake quickly and let the truck roll forward (the driveway is on an incline) and jolt to a stop against the parking gear. It worked! The truck started and -only slightly late – I made it to the farrier appointment where I proceeded to park and leave the truck running the entire time I was there. I had multiple people walk by and ask if I knew my truck was still on or if I’d like them to turn it off for me. Thanks, but no thanks.

Anyway, on to the new shoes. Sneakers are essentially orthotic shoes for horses. They combine a metal plate with a polyurethane shoe so the horse gets the cushion and support of a hoof boot, but it can be nailed on for convenience sake. I’d seen endurance horses using them, but not sport horses. When Levi was diagnosed, the vet recommended Sneakers. They are trickier than regular shoes to apply and most farriers don’t know how to do them or don’t want to. I lucked out though: my farrier is actually the largest user of Sneakers outside of the owner of the company.

I sent my farrier the x-rays and told him the vet had also recommended the Sneakers. He supported that recommendation and thought they’d provide the best support for his condition. 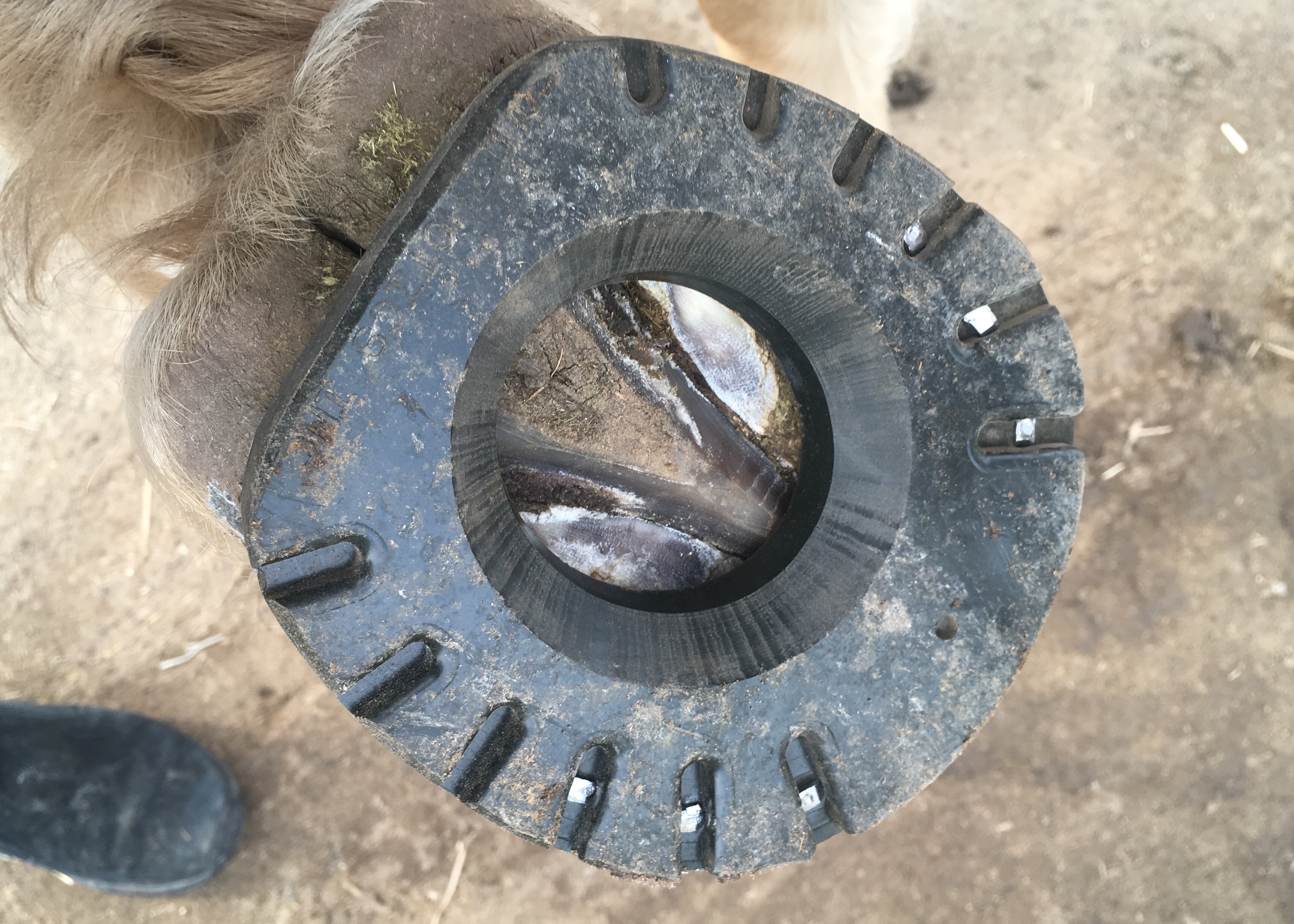 We couldn’t get them placed on at our regular farrier appointment because our barn doesn’t have electricity and he needs to run a bunch of tools to shape the shoes. Now that I’ve seen the shaping process, I can see why the average farrier doesn’t doSneakers; it’s a lot of work and requires some not so regular tools.

First step: trim the hoof as usual. Then place the Sneaker on the hoof and use a bright sharpie to draw lines where the Sneaker needs to be cut to fit. The metal clips also need to be pried out of the polyurethane, which was a lengthy process his apprentices struggled with a bit. 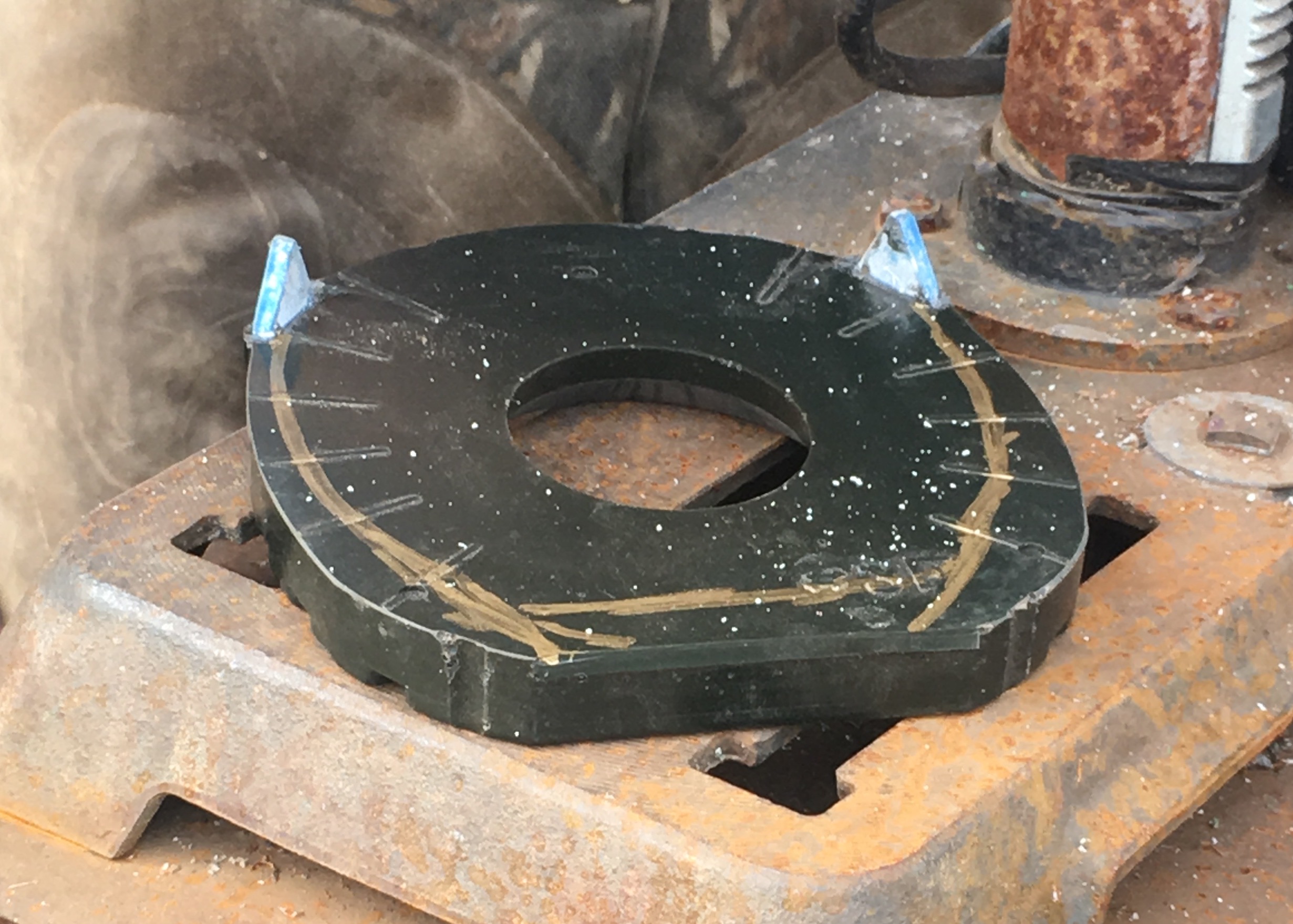 Next Step: Cut the shoe with a band saw. Your average farrier isn’t going to have a band saw. You can use a handheld jig saw, but my farrier said it’s a PITA and part of what makes most farriers not want to do these shoes. 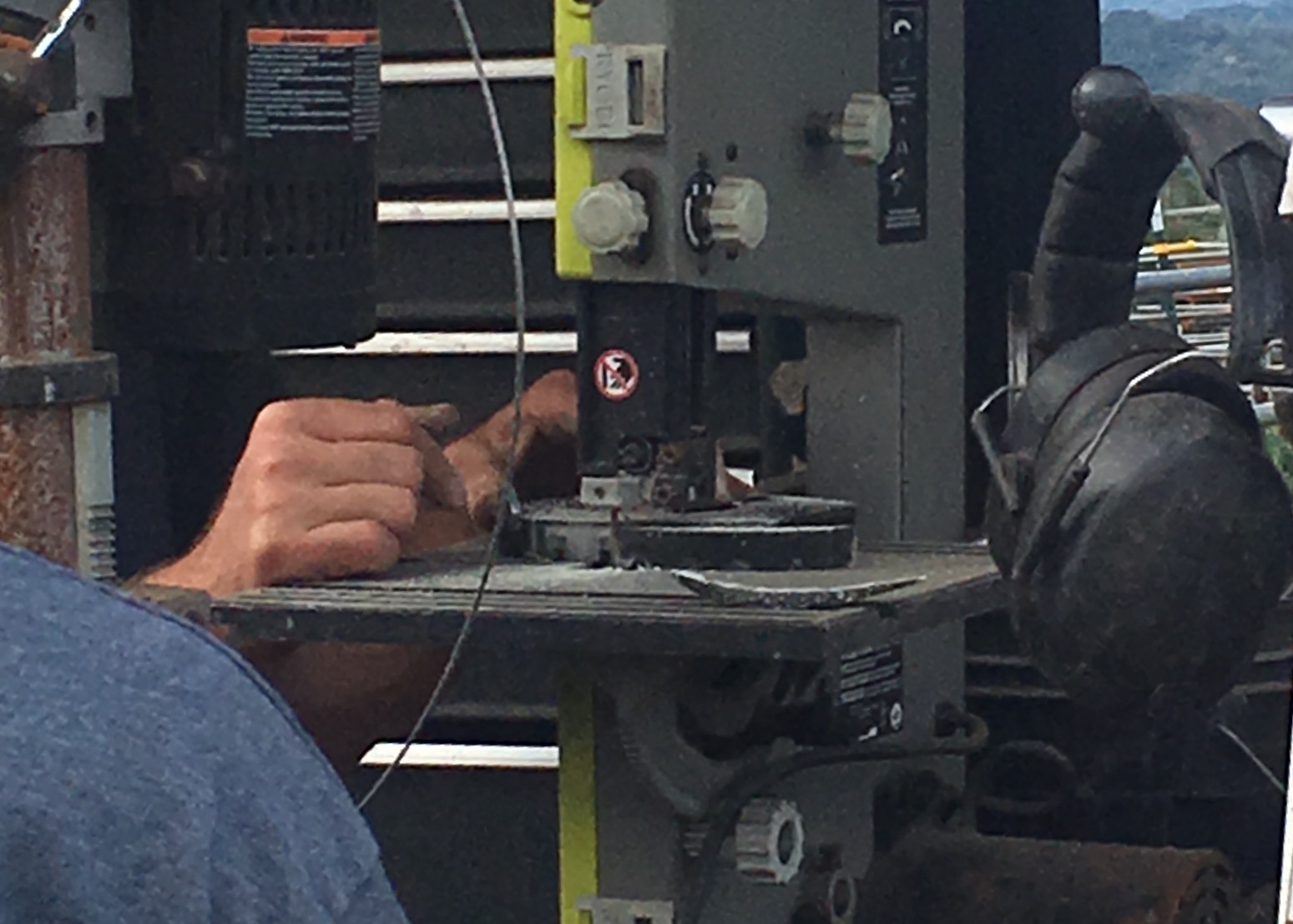 Then you need to round all of the edges with a grinder. Once again, you can do this with a rasp, but it’ll take a lot longer. 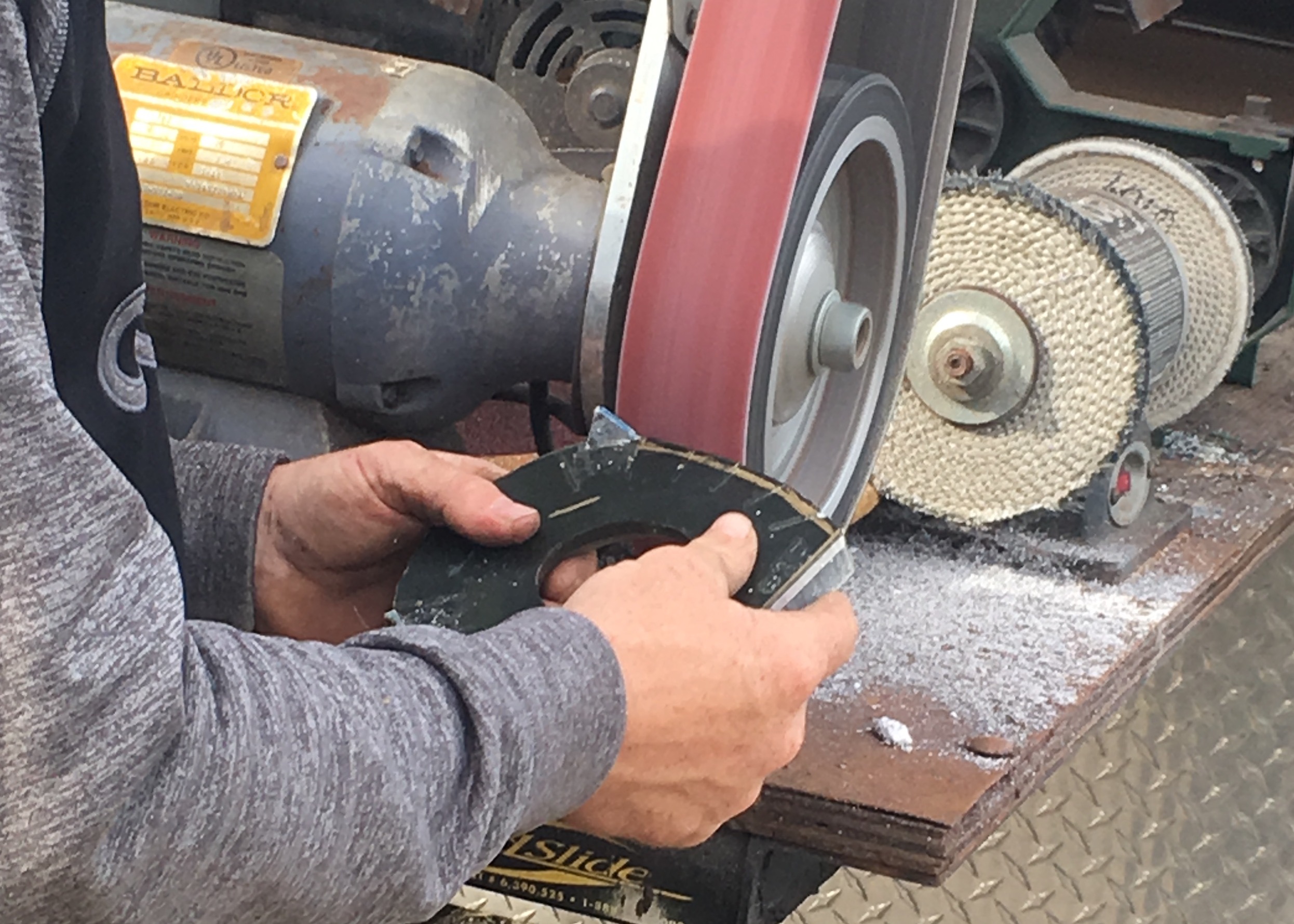 Once they’ve been rounded, you need to use a drill press to add nail holes. Because these things don’t even come with nail holes. 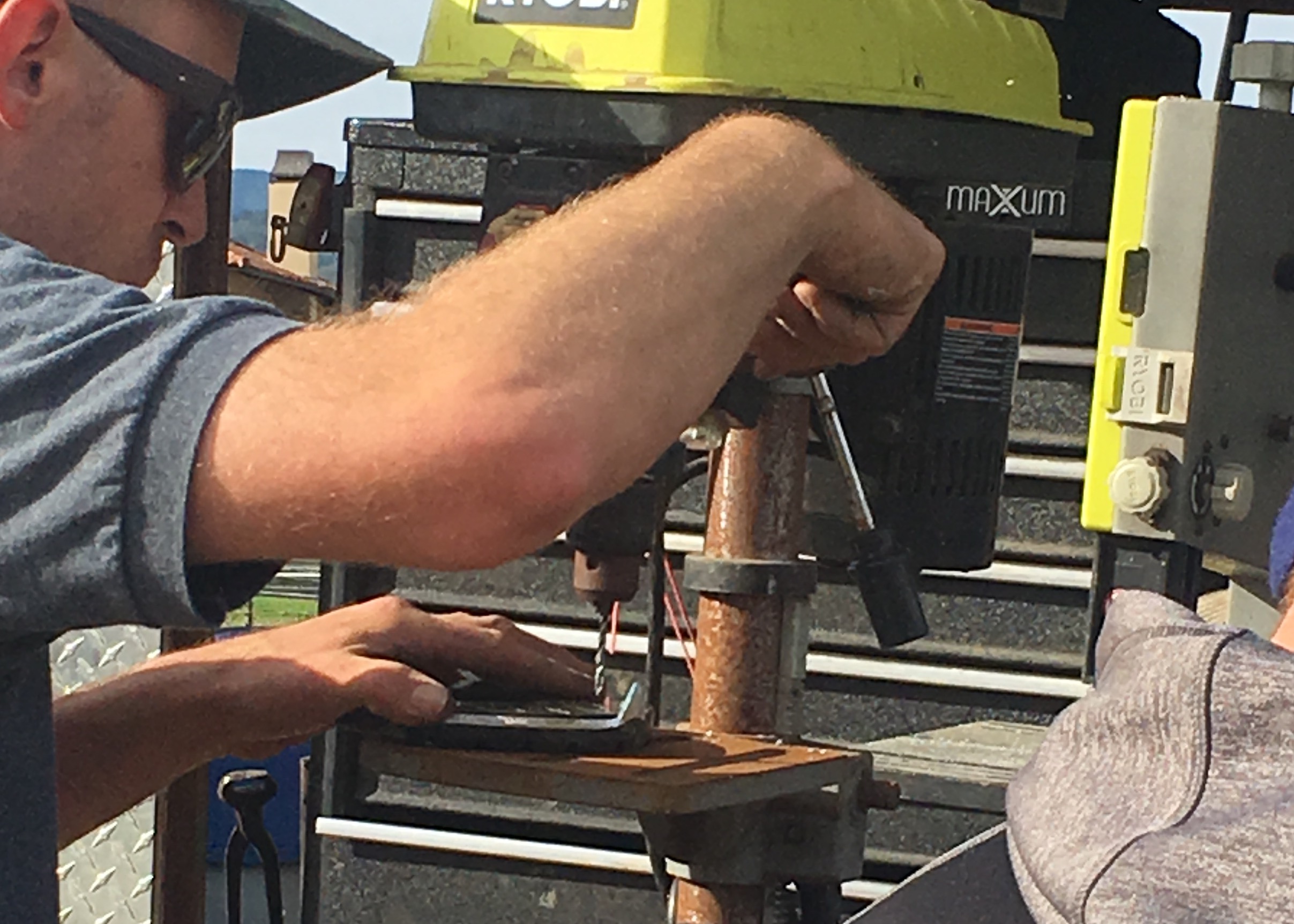 Once you’ve shaped and drilled your shoes, you can apply them to the horse’s feet. I didn’t get a picture of this part because I was holding Levi. The only real difference here is that the nails need to be back-punched. This isn’t a part of normal shoeing (nail-on EasyShoes need this too and a ride farrier we tried to use once didn’t even have this tool so it appears to not be something every farrier does), but it you fail to do it with the Sneakers, you will lose them.

Finally, the nails get finished like normal, the clips get hammered down onto the hoof and you’re done. 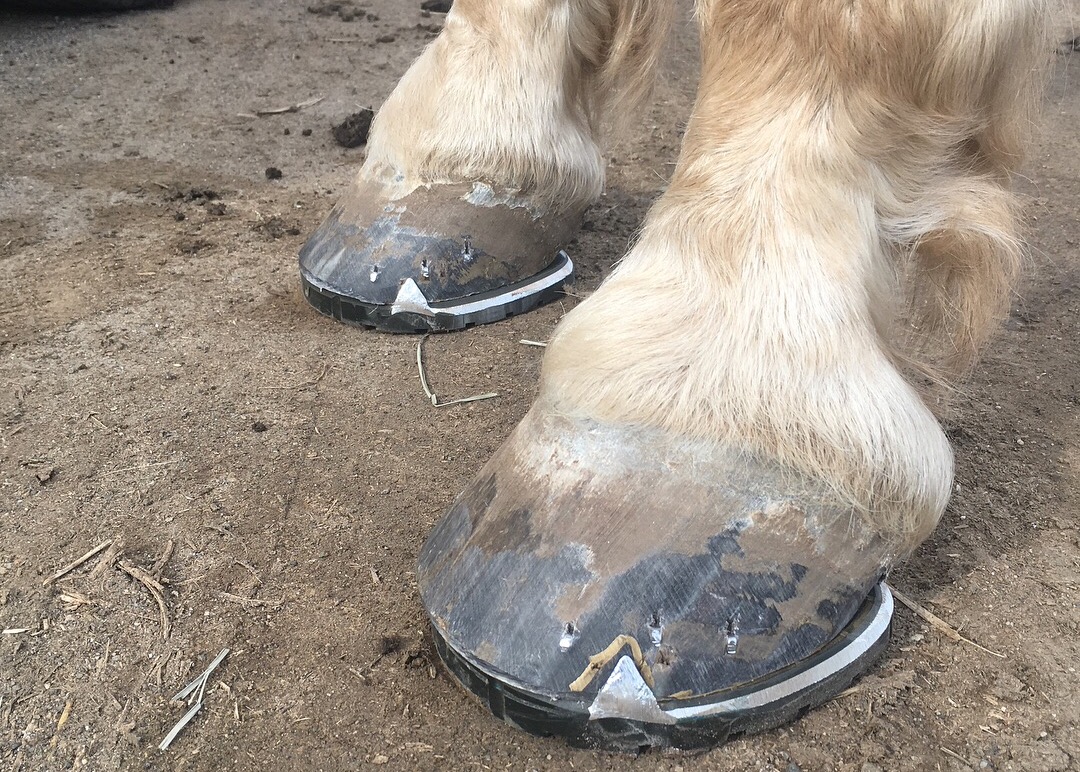 From the image above, you can see just how thick these shoes are. They can be rounded for even more breakover, but they will wear down on their own as well. My farrier says most horses can get 1-2 resets, which will be nice since it won’t take any time to shape the shoes for a reset and we pay for the shoes + labor and the labor is the more expensive part. The shoes alone are $70, which isn’t cheap, but it’s not too bad if they last more than one cycle. Of course, I’m pretty worried he’s going to pull them off as soon as possible. 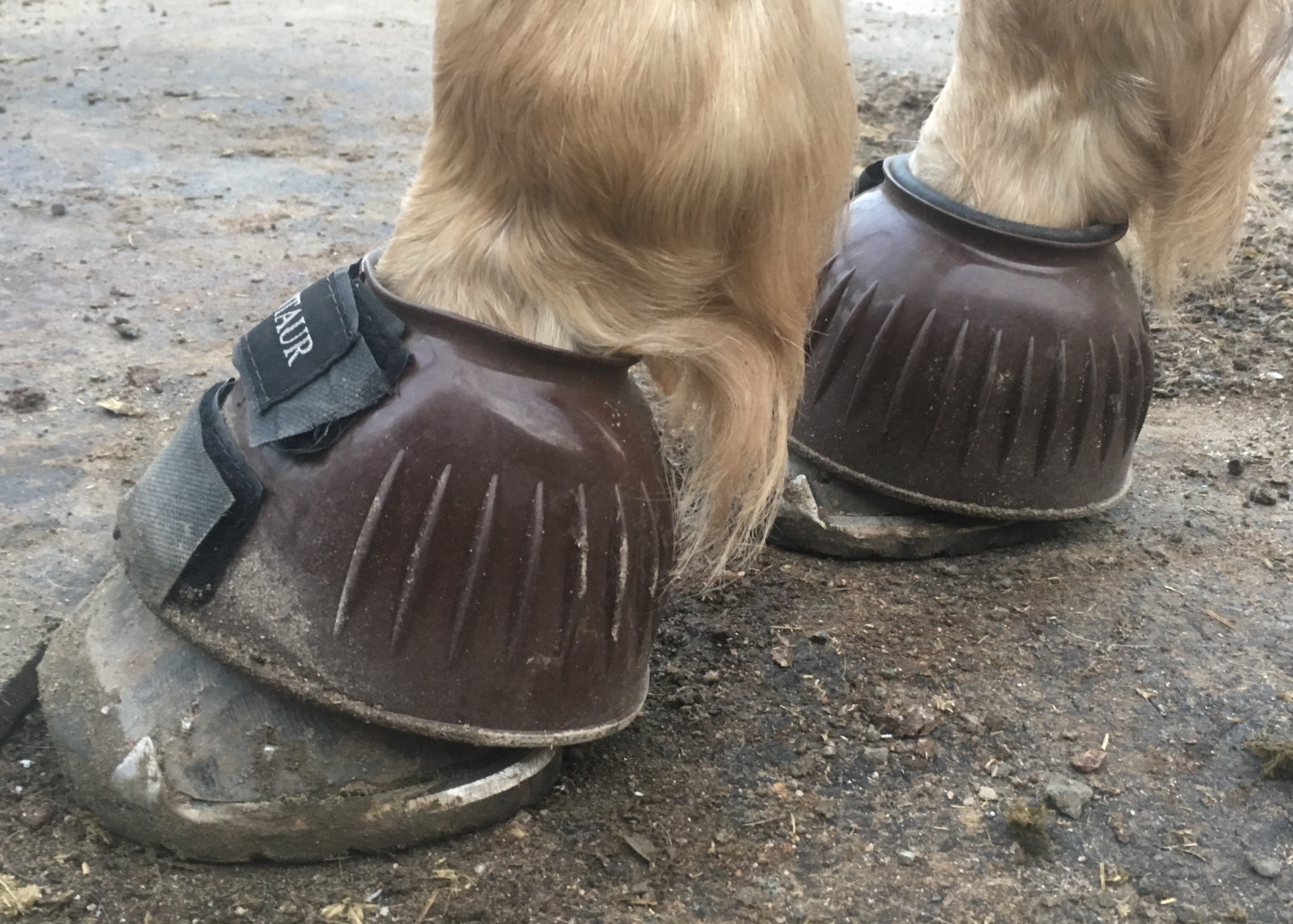 Levi also got rear shoes for the first time. I failed to get any pictures of this process. Although he doesn’t have sidebone in the hinds, he’s always had sensitive feet and he’s had a lot of bruising on his backs since we added fresh gravel to their pasture. This was Levi’s first time being hot shod and he could not have cared less. At least, not more than normal as he’s always a bit of a jerk about holding his back feet up. This horse might drive me insane for a lot of things, but he’s pretty freakin chill. Here he is watching all the loud power tools and not caring while the pasture horses behind the truck were snorting and whirling around. 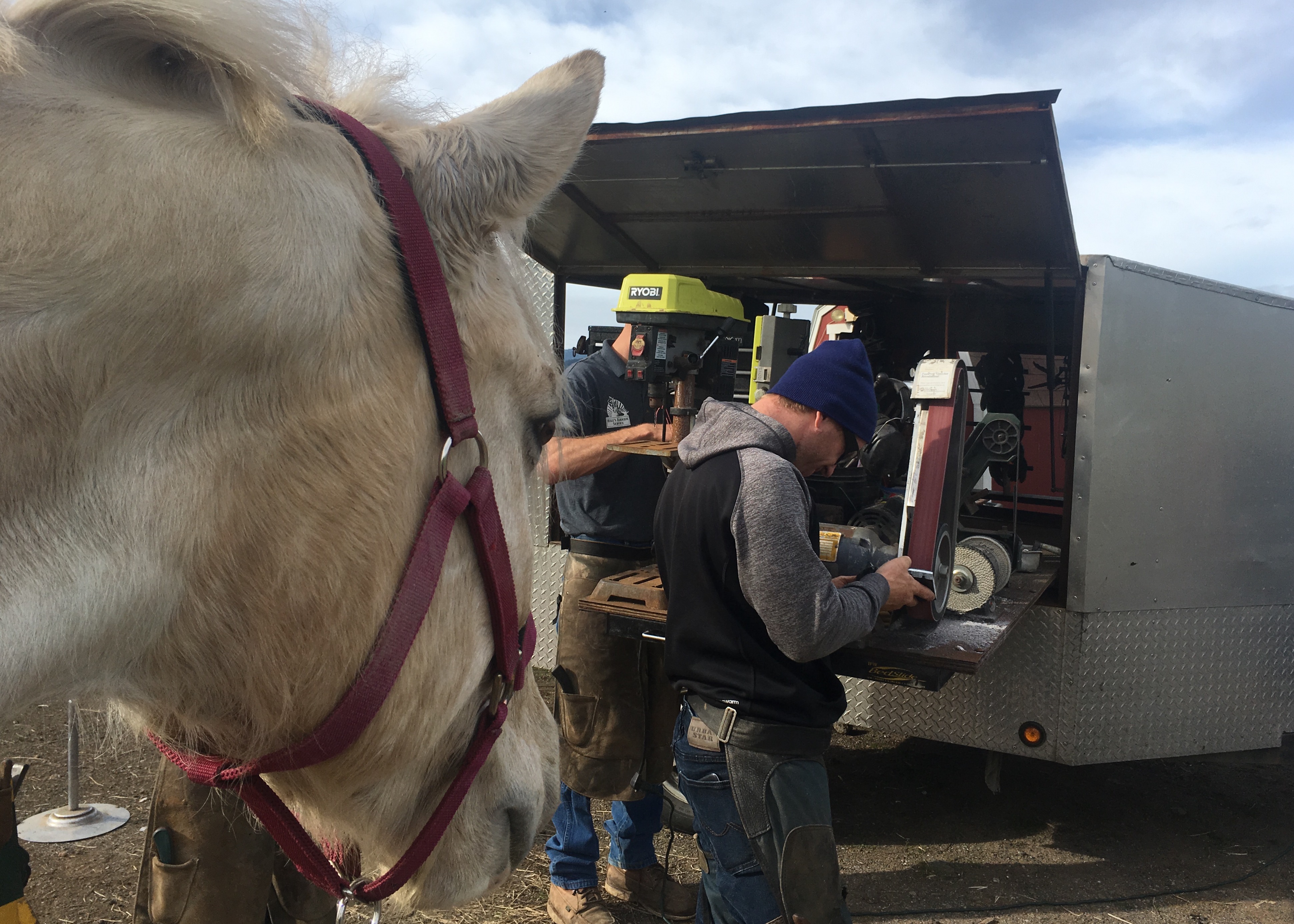 Once we were done, I put his bell boots on and took him home – keeping the truck running until I had it parked again. I had to go to work and then dinner with friends after so I didn’t get to ride or even lunge him to see how he felt until the next day.

I always like learning new things – I probably annoy my farrier with all my questions – so I enjoyed seeing the Sneakers installed. I figured readers might enjoy learning more about them as well. I really hope they work for him and that they stay on. Not only does Levi like to step on himself, he also likes to stick his feet through corrals and paw backwards in a manner that is probably the most efficient way to remove a shoe outside of having farrier tools. If you have any tips for keeping shoes on, let me know.