I’ve had the Total Saddle Fit Shoulder Relief Girth for my jumping saddle for well over a year now. As I said in a previous post, I like the idea of the girth much more than I like the girth itself. As a used purchase, it is entirely possible that mine is made from the older leather TSF used to use. I know they did a replacement program when they switched to a better leather, but, since I bought mine used, I don’t know if mine is the “good” or bad leather. I do know the one I have is stiff and a terrible orange/red color that no amount of hydrophane has managed to change. 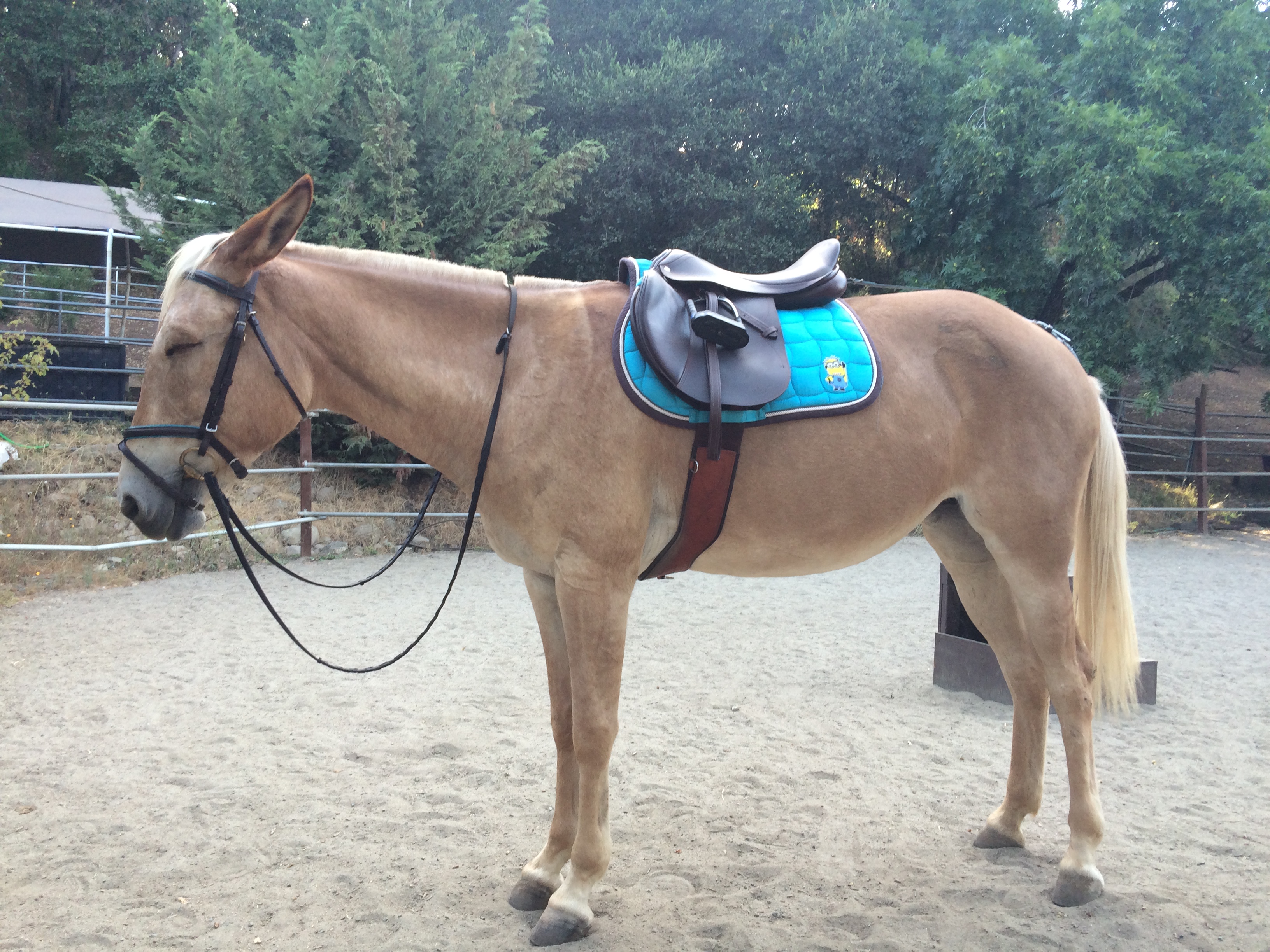 In addition to the leather being stiff and ugly, the front center part of the girth bridges/gapes away from Nilla’s body. This means that the pressure of the girth is entirely on the back of the girth under her and along the front of the girth at the saddle attachment. Here’s a line to illustrate what I mean since this isn’t the best picture: 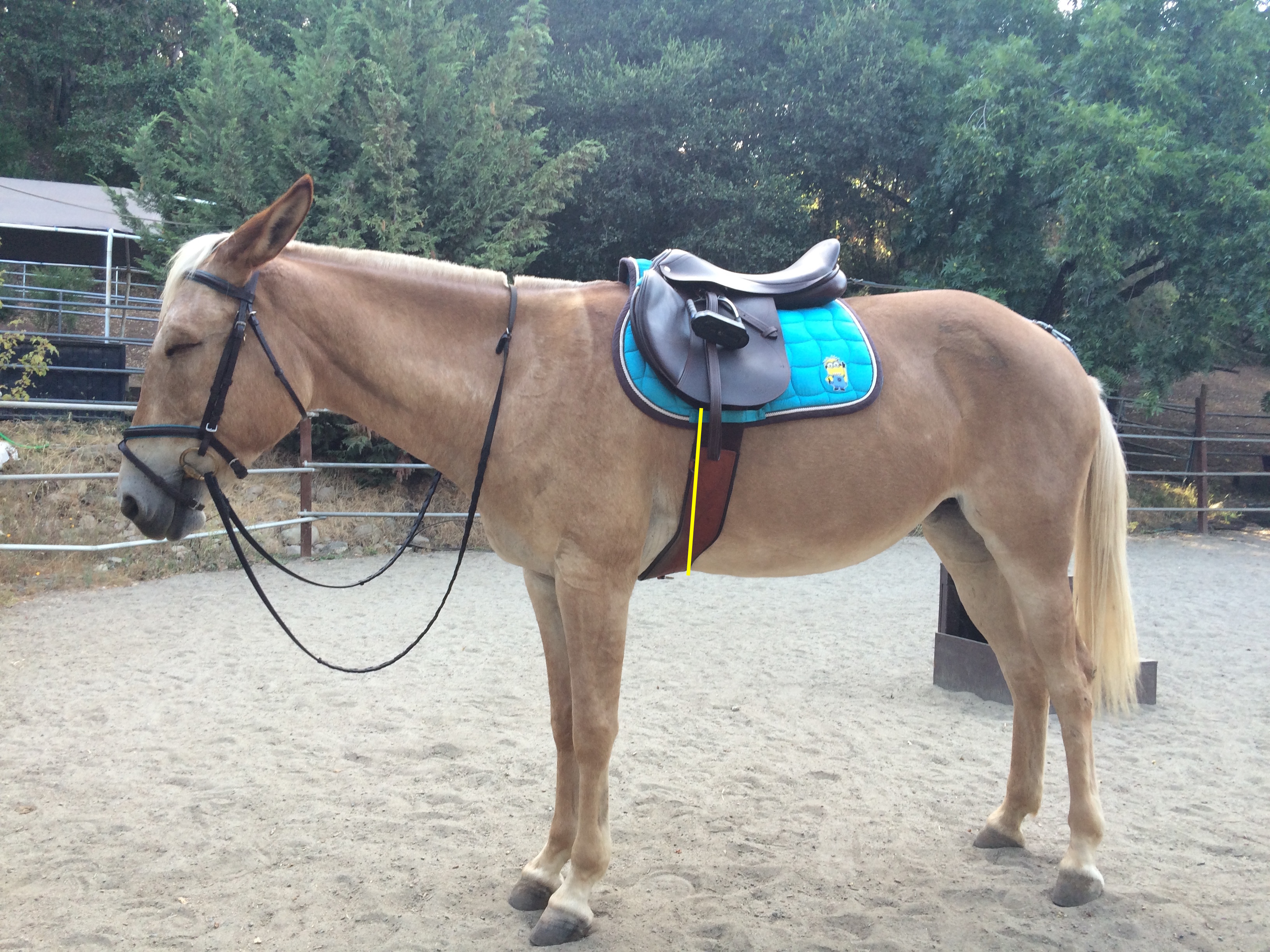 Given all of these issues, I’ve never loved this girth. However, as a downhill mule with huge shoulders, Nilla really needs everything I can get to help keep the saddle back.

When I saw that Total Saddle Fit had come out with a new girth with an elastic middle – the StretchTec – I was excited to try it. It seemed like this elastic middle would solve the gaping issue with the original girth while still offering the shape to help keep the saddle back. I held off on buying when until Rolex because I knew TSF was going to be there and they have a $10 off deal at Rolex. Plus, I could shove the girth in my luggage and not pay shipping.

The girth comes in neoprene or leather, but a really cool feature of the girth is that the linings can be swapped out. So you can buy one and add the other lining later. I bought the neoprene as I prefer a softer, stickier girth. A bonus for that decision is that the neoprene was cheaper. The main girth is still leather and it’s just the lining that’s neoprene. I don’t think any judge or snooty dressage spectator could possible notice that it’s not entirely leather. And even if they could, they’d be so appalled by the condition of my saddle – which actually cost less than this girth – that the girth would never be an issue. 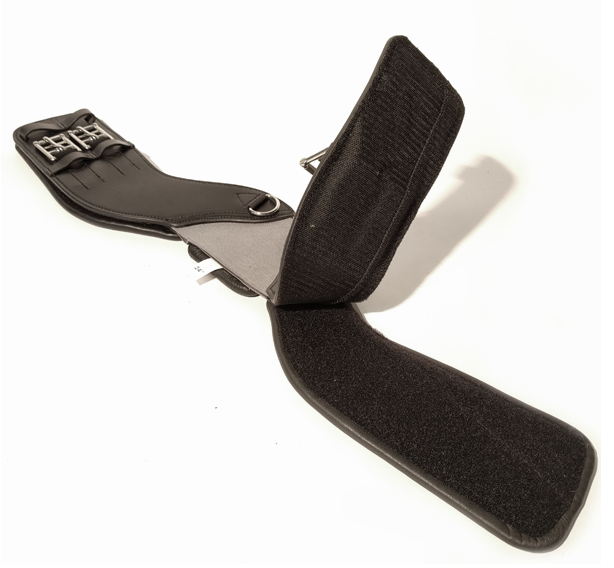 I’ve liked how the girth fit from the moment I first tried it, but I’ve been waiting to do a review until I’d been riding in it for a while. Now that I’ve had the girth for almost two months, I thought I’d share my thoughts and opinions.

The StretchTec really solved all of the gaping issues that I had – and have read about others having – with the original shoulder relief girth. The girth hugs Nilla all along it’s entire length and width. 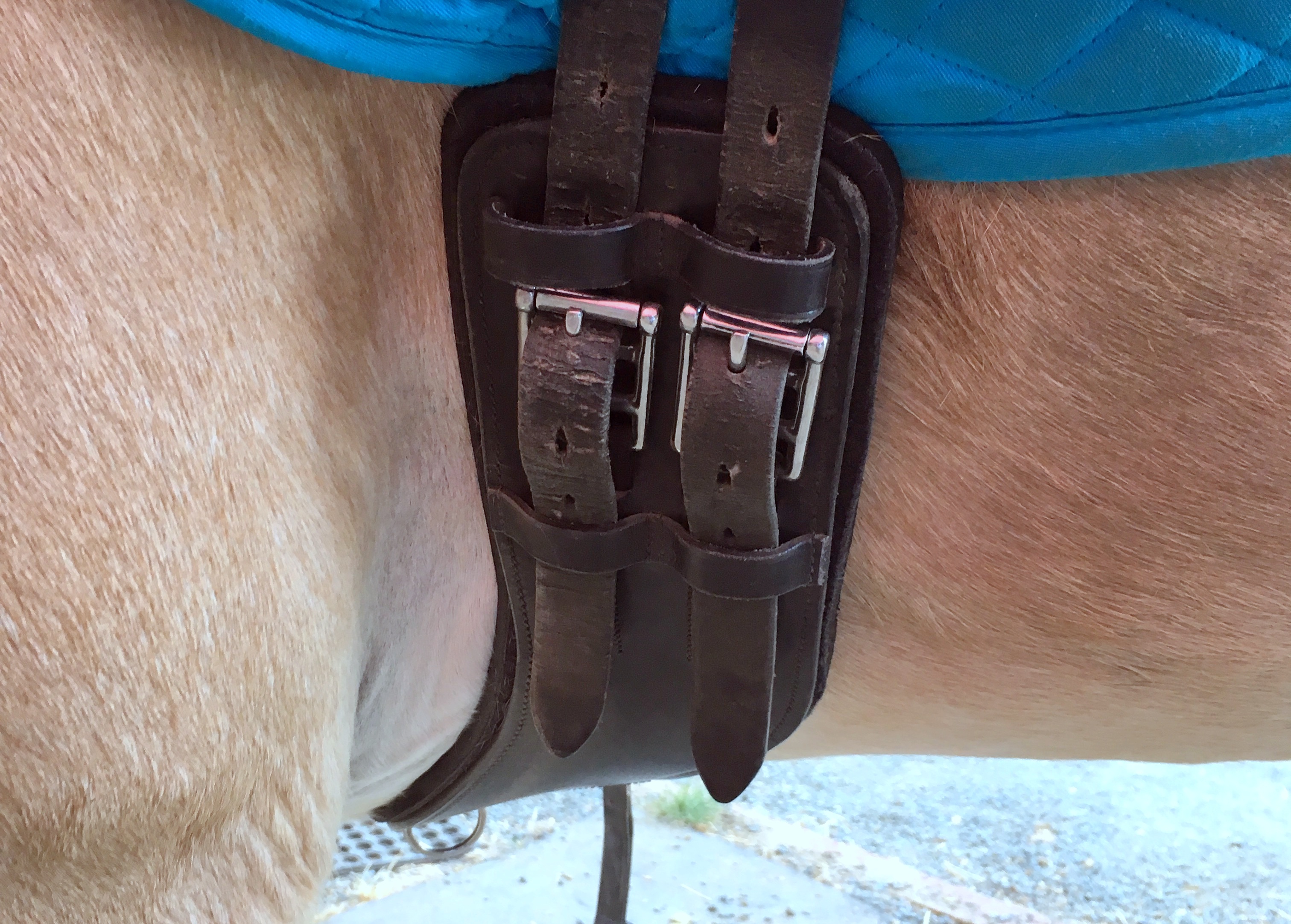 Even the neoprene lined girth looks great. My saddle’s billets, on the other hand, look terrible. I like how the girth hugs Nilla while the anatomical shape holds the saddle back from her elbow.

The only real complaint I have is that I should have gotten one size down. I debated getting the 24″ or the 26″. My previous girth was a 24″ and it was really hard to get on even though it had big elastics on both sides at the buckles. The TSF girth only has a little bit of elastic at the buckles, so I ended up buying the 26″. Well, the elastic in the center of the girth also stretches and that ends up making the new girth a bit too long for her. It’s so stretchy, I always end up having to tighten this girth after I’ve warmed up for a few minutes.

While I do still need to use a crupper with Nilla, I do this this girth helps. I have even used it with draw reins (which attach to the two buckles on the center of the girth) and the girth does not slide forward. This is with considerable force being applied to the girth given Nilla’s antics that necessitated the draw reins in the first place. 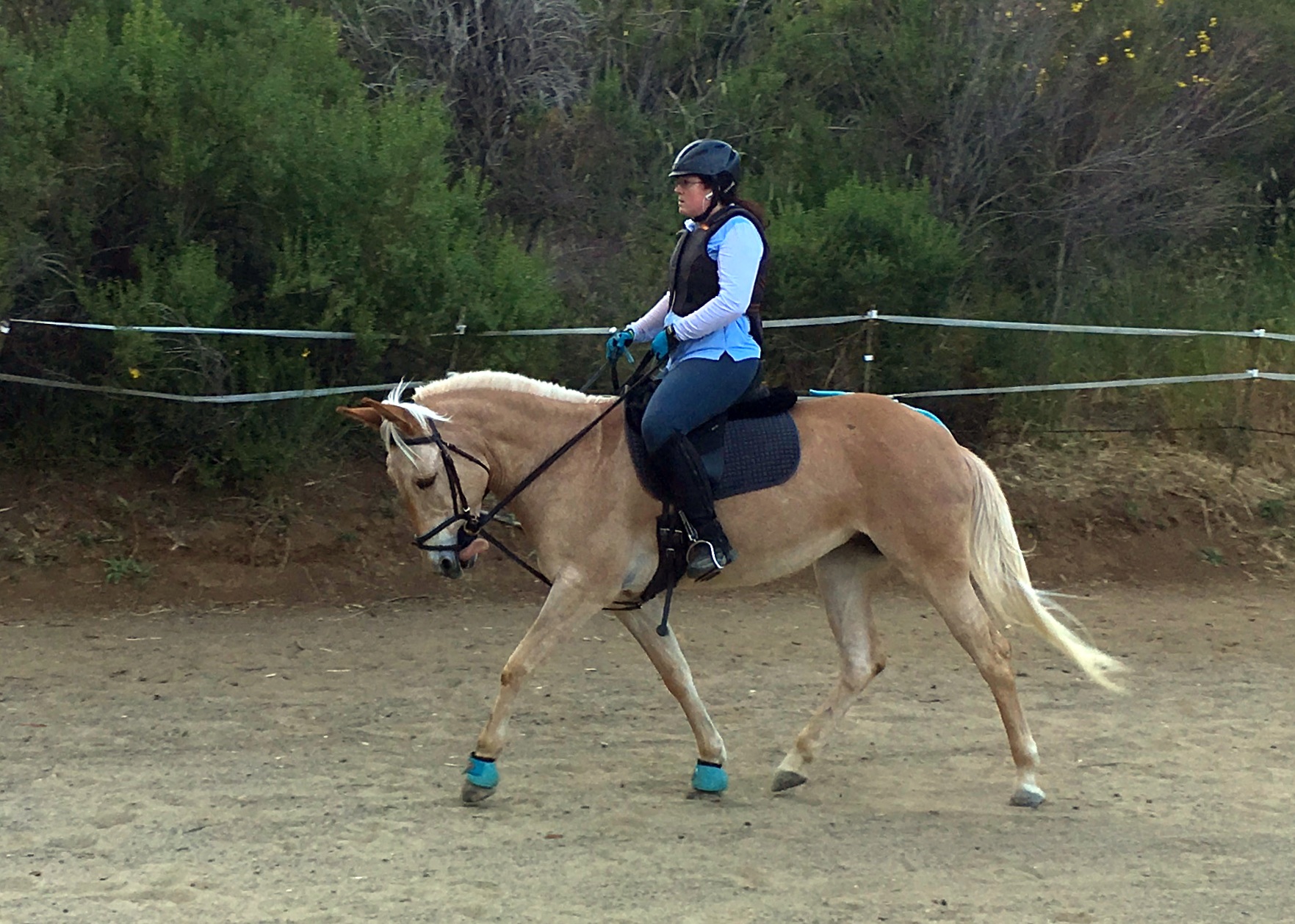 Girth is back, saddle is back, despite draw reins and pissed off mule. The girth obviously also works well without the side reins. I have even jumped a few times in the dressage saddle with this girth and everything stays in place. 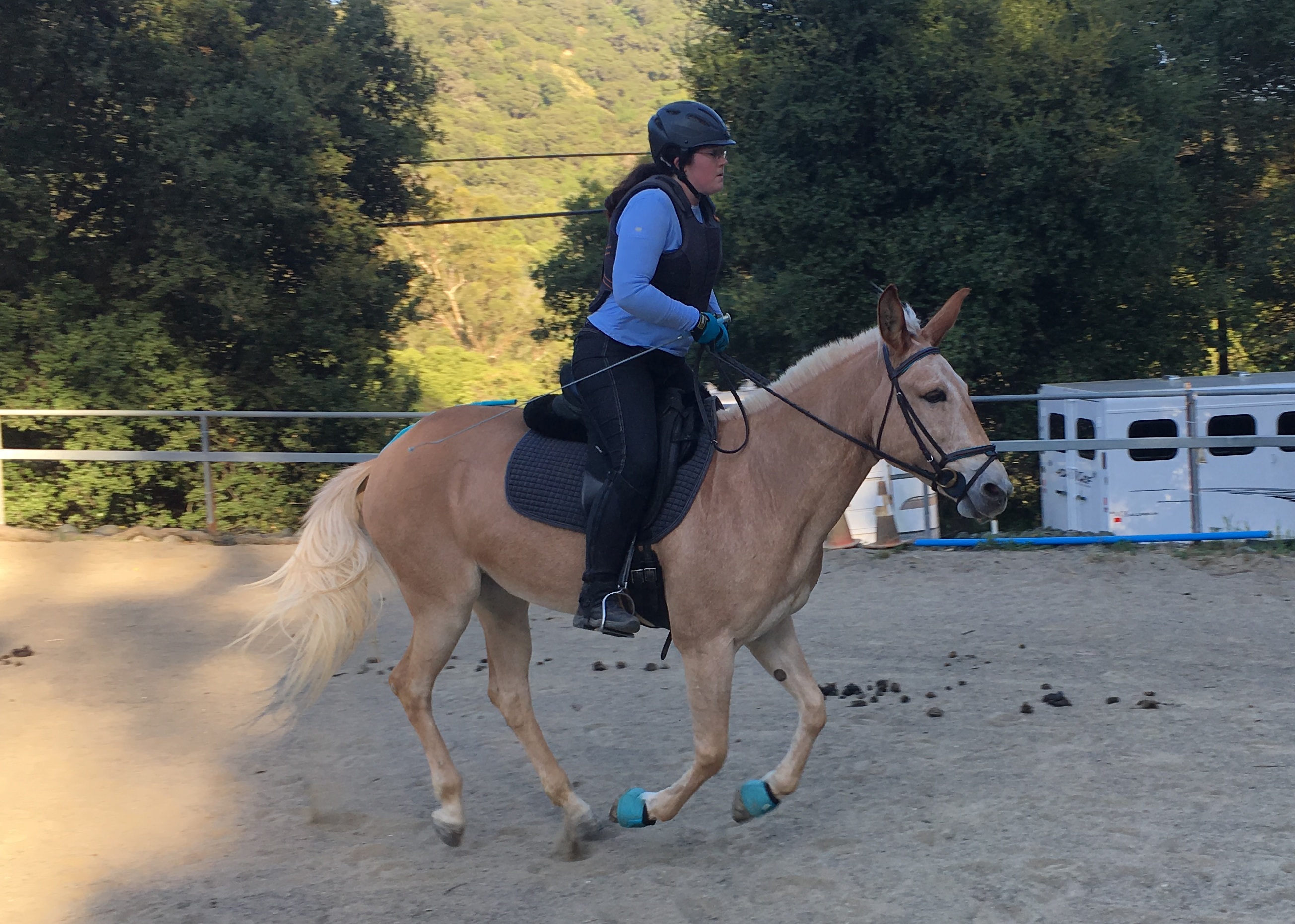 Right now, TSF is only offering the StretchTec on their dressage girths, but I hope they will extend the technology to their jumping girths. Or maybe I’ll just buy that monoflap saddle I’ve been eyeing. I would highly recommend the StretchTec girth even to people who’ve tried the previous TSF girths and weren’t very impressed. If you did like the previous TSF girths, you’ll like this one even more. I would recommend it even if you don’t have an oddly shaped horse who needs an anatomical girth because the leather quality is great and the stretchy center and neoprene make for a very nice fit.