The short answer is: No one really knows.

The long answer is…

Nilla has a history of hock arthritis. With injections, Previcox, and Osphos on board, I felt like we finally had them managed. She won Best Condition at two different endurance rides and those were judged by vets so I feel like my belief that she was sound wasn’t completely subjective. 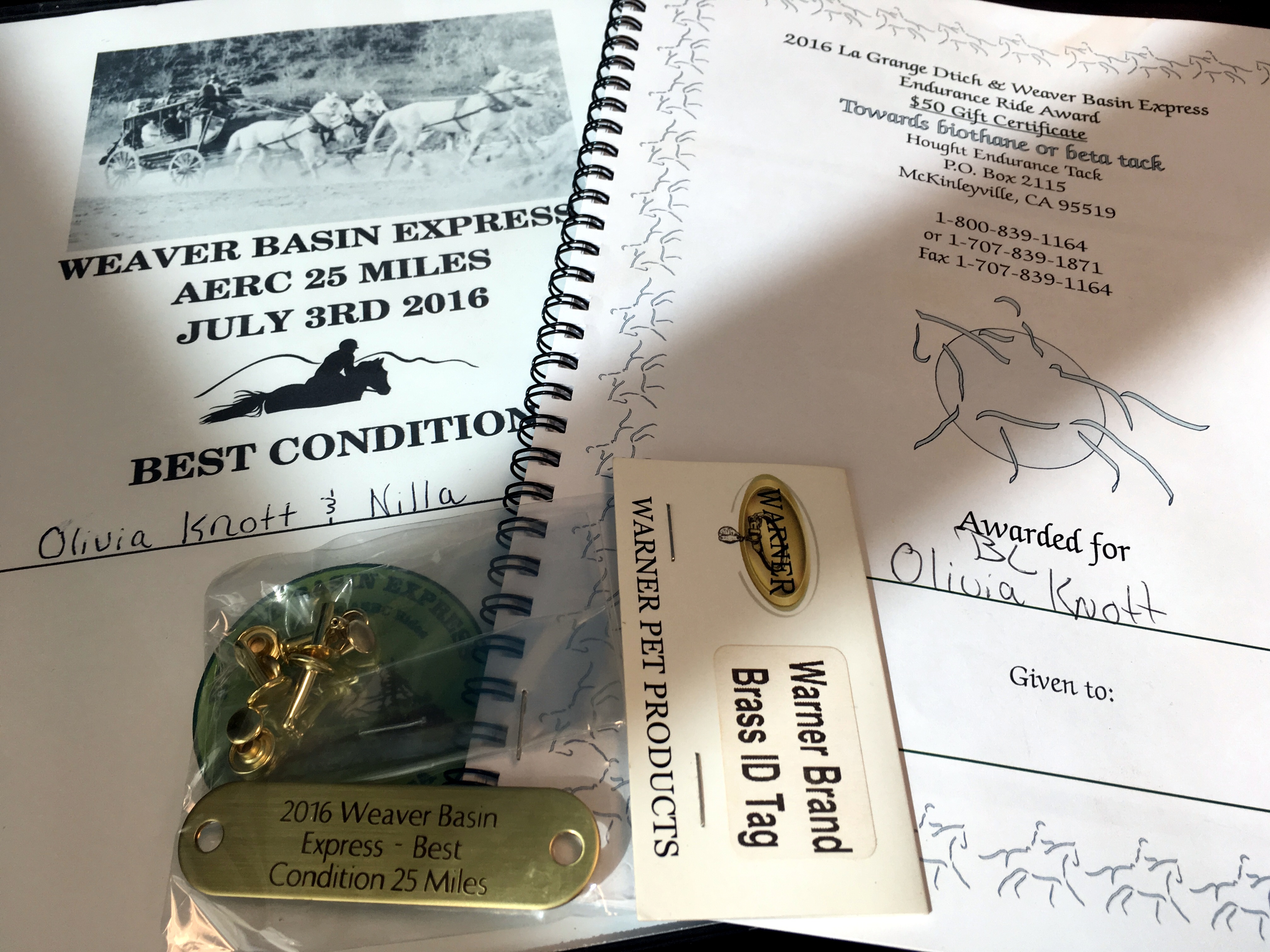 However, when Nilla developed ulcers back in July, I took her off Previcox. As July passed into August, Nilla’s hocks were getting worse. Given that she was injected last year in September and injections can last 6-18 months I figured she probably needed injections again. But I was concerned that they wouldn’t be enough. When I did injections last year, they didn’t really work. She almost got pulled at Quicksilver a few weeks later.

When we left Camelot, my husband asked me what was next for Nilla and I said, I don’t know. While she was mostly sound, there were moments at the event where her back end dropped out from behind her. She would just stumble, then keep going like it hadn’t happened. She did this last year before the injections so I figured it was her hocks again.

After she nearly failed the vet check at Quicksilver, I had my vet do X-rays. When she did the injections, she wasn’t able to get the full injection in on Nilla’s right hock. The X-rays revealed that her right hock was partially fused in the middle making it difficult to inject. We discussed doing an injection into the joint from the front, but it’s a dangerous injection to do for the vet with a lot of risk of getting kicked. And Nilla has already proved herself to be risky to inject.

You see, mules are weird to sedate. They usually need more sedation than a horse of similar size. When getting dental, Nilla gets 2x the dose of the horses and she’s basically awake the entire time and just tolerates the dental. However, if you give Nilla a ton of sedation, she starts falling down. She’s still awake enough to fight you if she doesn’t like what you’re doing, but she’s now stumbling on her own feet. None of this makes her easy to inject. And outside of not wanting your head kicked in as the vet, the constant stumbling movement makes injections difficult.

I would need to take Nilla in to a hospital with stocks to do that injection. We ended up adding Previcox instead. And then Nilla kicked her leg through a metal trailer door and fractured her pastern. That was fun! Nilla got some time off and came back doing pretty well. We added the Osphos in May and then did the two rides winning BC. Then the ulcers ruined everything.

So with that lengthy, complicated history, I decided to take her to a different vet. This vet has a hospital and would be better set up to do injections from the front or some other procedure if that was advised. It’s a pretty fancy place, so I went in figuring it was going to cost me. When we got to the point where two techs and three different vets were working on Nilla, I started feeling like maybe my poverty estimates weren’t extreme enough. 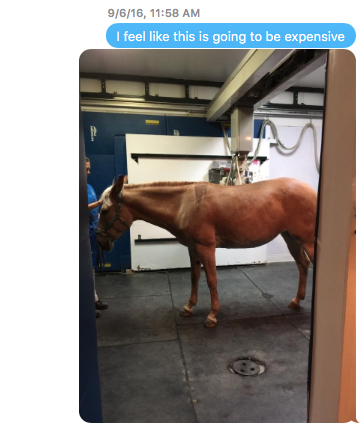 Texts with my husband

On the plus side, Nilla thought this place was amazing as they had real live grass. This is basically unheard of in California in the summer. 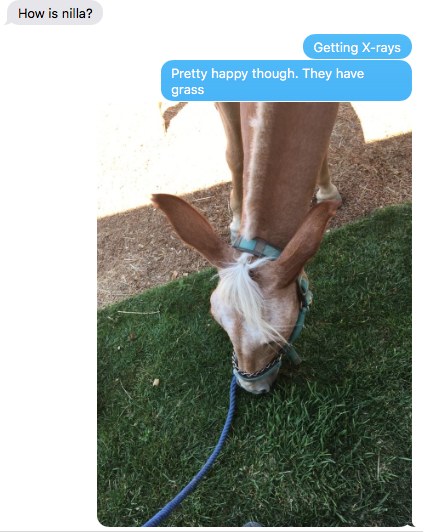 texts with my husband

Anyway, they did lots of palpitations and trotting and flexions and trotting on circles and more palpitations. The vets were a bit concerned about all of the scar tissue in her pastern area. Apparently that part of her leg was “crunchy.” Yeah, that’s a word you want to hear from your vet. It wasn’t a problem though, all the soundness issues were in the hocks. So we progressed to X-rays.

The vet thought the X-rays showed that she clearly needed injections, but her hocks weren’t too bad. Because she’s such a problem, Nilla got extra happy juice and a twitch for the actual injections. 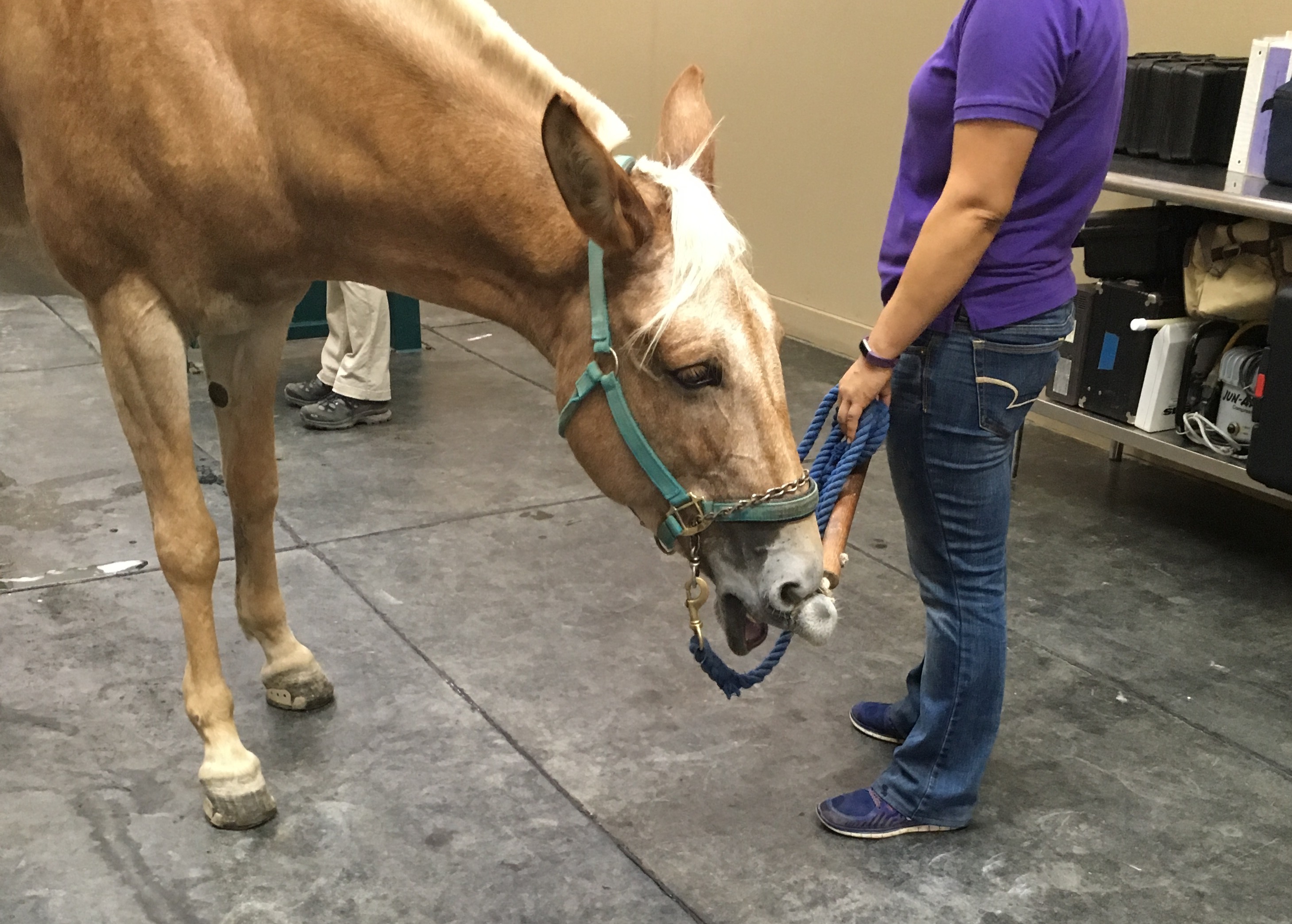 My vet had also injured her finger so the head vet was called in to do the actual injections. As they were conferring after the injections, I realized they thought her fracture from the trailer accident was in her hock. No, I told them, it was down in her pastern. The reason for that confusion? She has a fracture in her hock. It’s not new; it could have been there for years or it could have happened when she kicked her leg through the trailer door. We never X-rayed that high on the day of the injury because all of the cuts were lower down.

This fracture is scary. It’s where the suspensory attaches and calcification/bump from it is possible irritating the suspensory. But it’s also possible that it’s not bothering her at all. Hell, it could be an injury from years ago. We don’t know (my short version of this story). Given that she was sound and completing endurance rides post accident, it’s very possible this fracture isn’t effecting her at all.

Right now, the plan is to give her a week off post-injections and then she goes back to normal work. We’re also going to resume the Previcox as apparently it’s not that rough on stomaches and her ulcers are under control now. In 3 months she should get another Osphos injection. If she stays sound, we go on with the idea that the fracture isn’t bothering her. If she can’t stay sound, we re-evaluate. 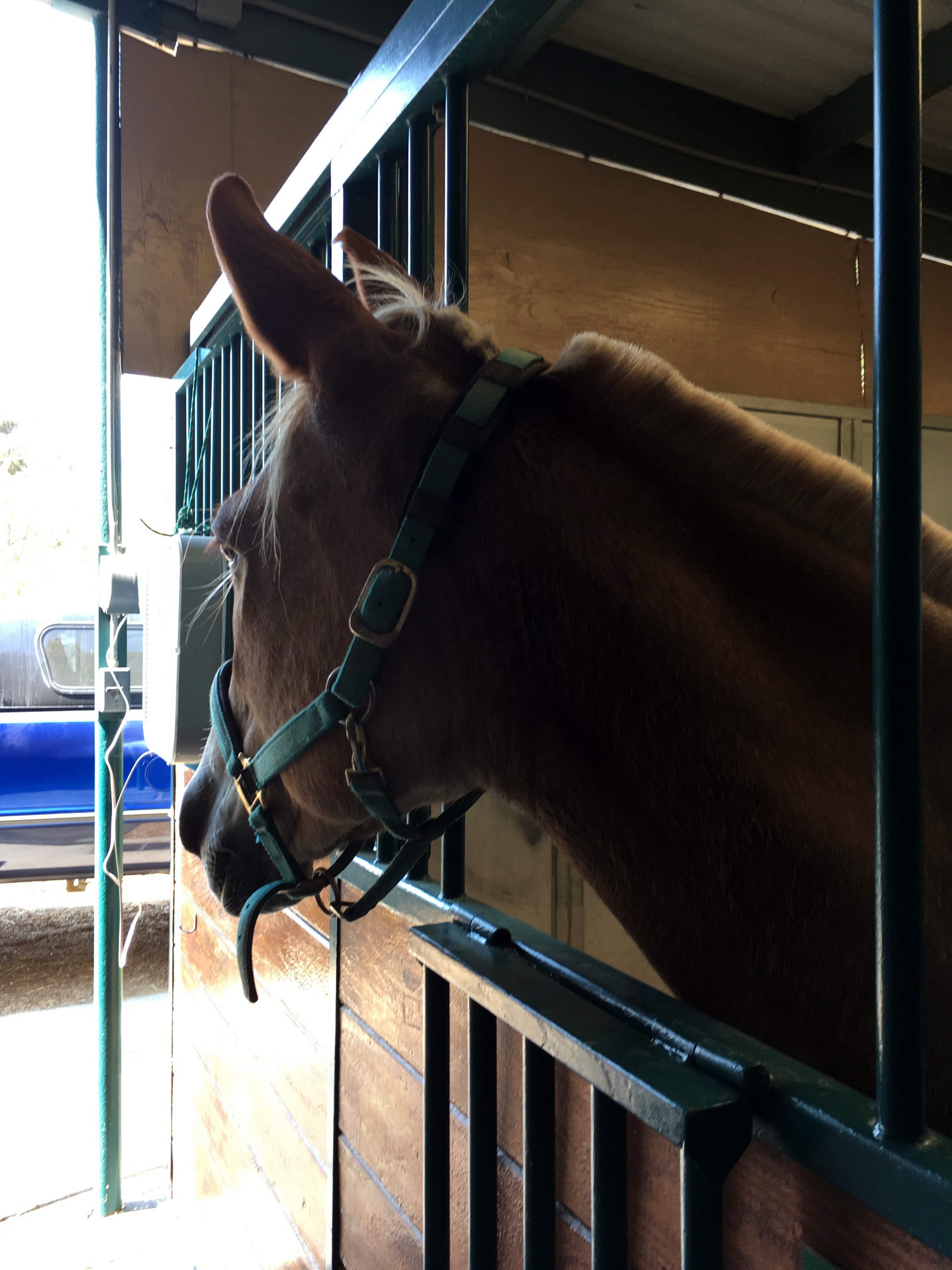 Nilla in her stall at the vet’s

I feel like this is a real-life Schrodinger’s Box. Right now, the bandages are still on and – in my mind – Nilla is simultaneously sound and retired. The only way to find out is to wait a few more days and then ride her again.