I swear Levi is conspiring to be a pasture pet. I think I’ve ridden him like 20 times since November. He spent two months not being ridden, and then, when we finally got to ride again, it rained forever. About 3 weeks ago, he slipped in the mud.

It was just a short slip of the hind end and he seemed fine initially, but the next day was stiff going downhill. I took him back to the barn and threw him in the small arena to free lunge. He was totally sound on the flat. I poked and prodded until I discovered that his right hind leg had some heat. He has had windpuffs on both hind legs as long as I’ve had him, but this time the ones on his right hind were hot. Which is not normal. 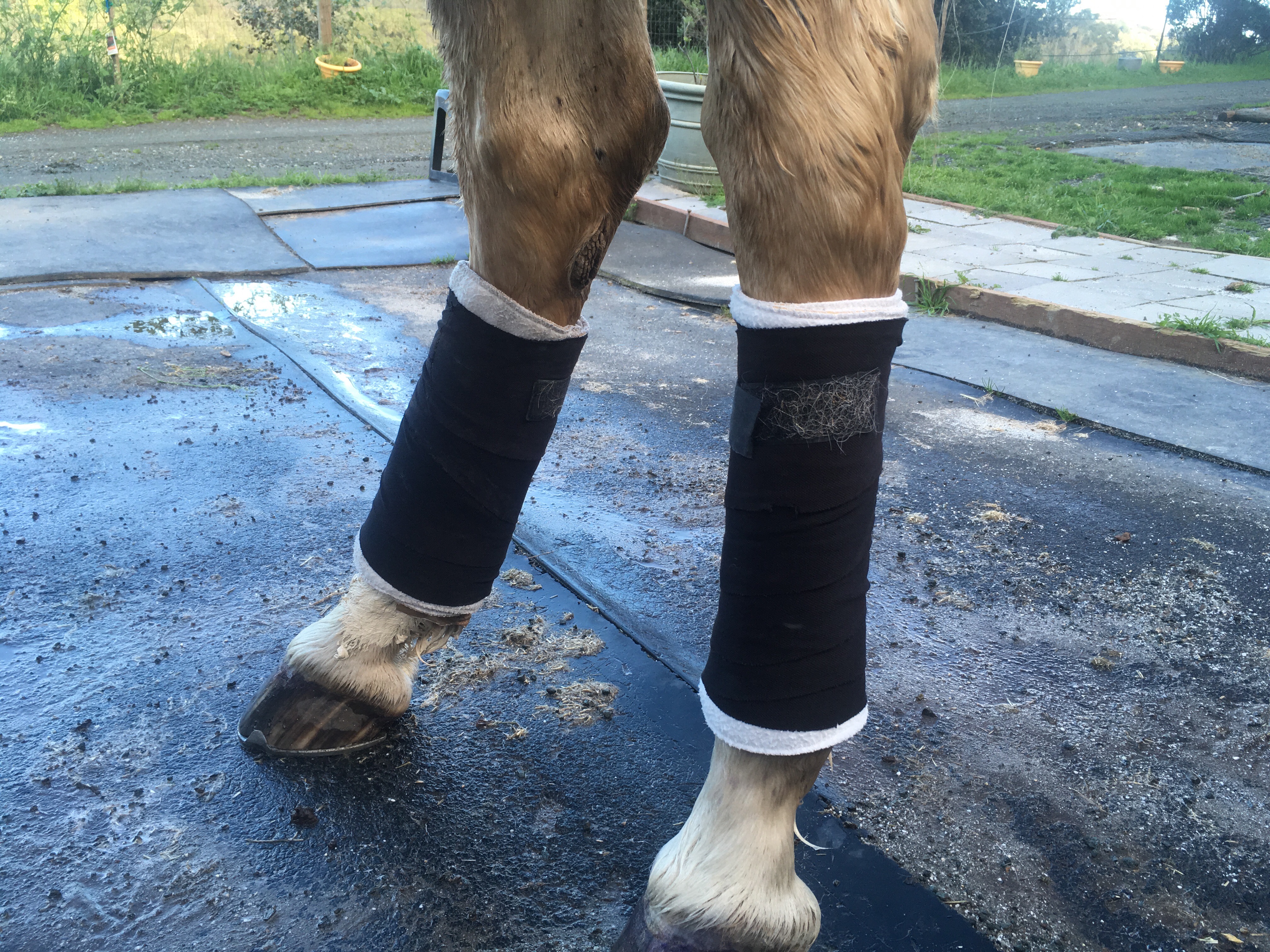 I wrapped him up with poultice and gave him some bute for a few days and he was back to normal. He stayed nice and sound through all of it. I rode him on Friday before the schooling show and he was sound with no heat after being ridden even the next day. However, the show must have been too much for him as we had some heat afterwards. Back to poulticing for a few days without bute this time and he was fine.

Luckily, I’ve had the vet scheduled to come out for a two day dental clinic and spring shots at our barn for over a month now. On Monday I had her do a lameness exam and he was sound. She was actually really impressed with how much more sound he looked since he got his new shoes. He was wildly reactive in his SI area on exam (I’ve already scheduled the chiropractor to come out), but not bothered about anything else. He didn’t care at all about having the windpuffs really poked and prodded by the vet.

We did get him to react very slightly to a flex on the pastern joint on the right hind. But it was very slight. The vet said he probably strained something in the slip and that it’s been healing since I haven’t been riding him. She said if she’d examined him at the time of the injury, she would have suggested a month of light riding with poulticing/icing after rides. Since I’d already given him 3 weeks of almost no work with poulticing, I could just go back to riding and he should be fine.

It was good to hear that I’d been caring for him correctly, but I wanted to know if something was wrong. I figured he could have a really minor tear and continued riding might make it work. So I asked if we could ultrasound the leg. Between the vet having to go back and forth helping the dentist with sedation and giving the other horses their shots, just getting the lameness exam done took forever and I had to go to work.

I came back the next day and it once again took forever to get the ultrasound done. In addition to the dentist and shots going on, the vet was also removing a mass from the barn owner’s dog and I got roped into helping hold the dog still. I’ve never participated a dog surgery occurring at a barn in the middle of everything so I guess I can add that to the list of weird things I’ve done. Anyway, we finally got around to doing Levi’s ultrasound. 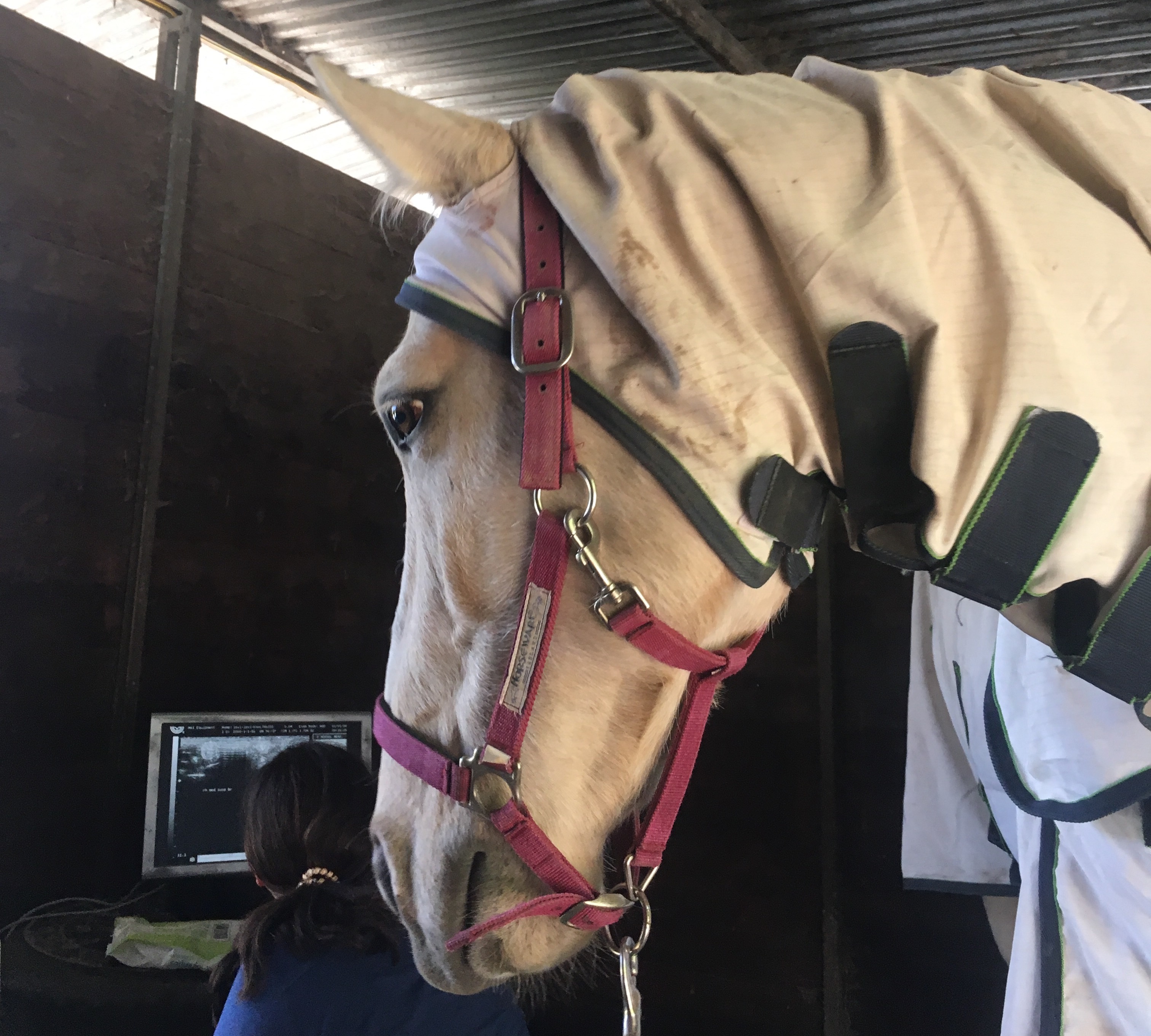 Levi is such a good boy, we got to do the ultrasound without any sedation. He stood still the whole time and didn’t care about a thing. Nice for saving me some money! He doesn’t care about stuff, but he is a fidget and he wanted to playing with things instead of standing still. At one point the vet was paused to do something with the machine and Levi licked his leg. 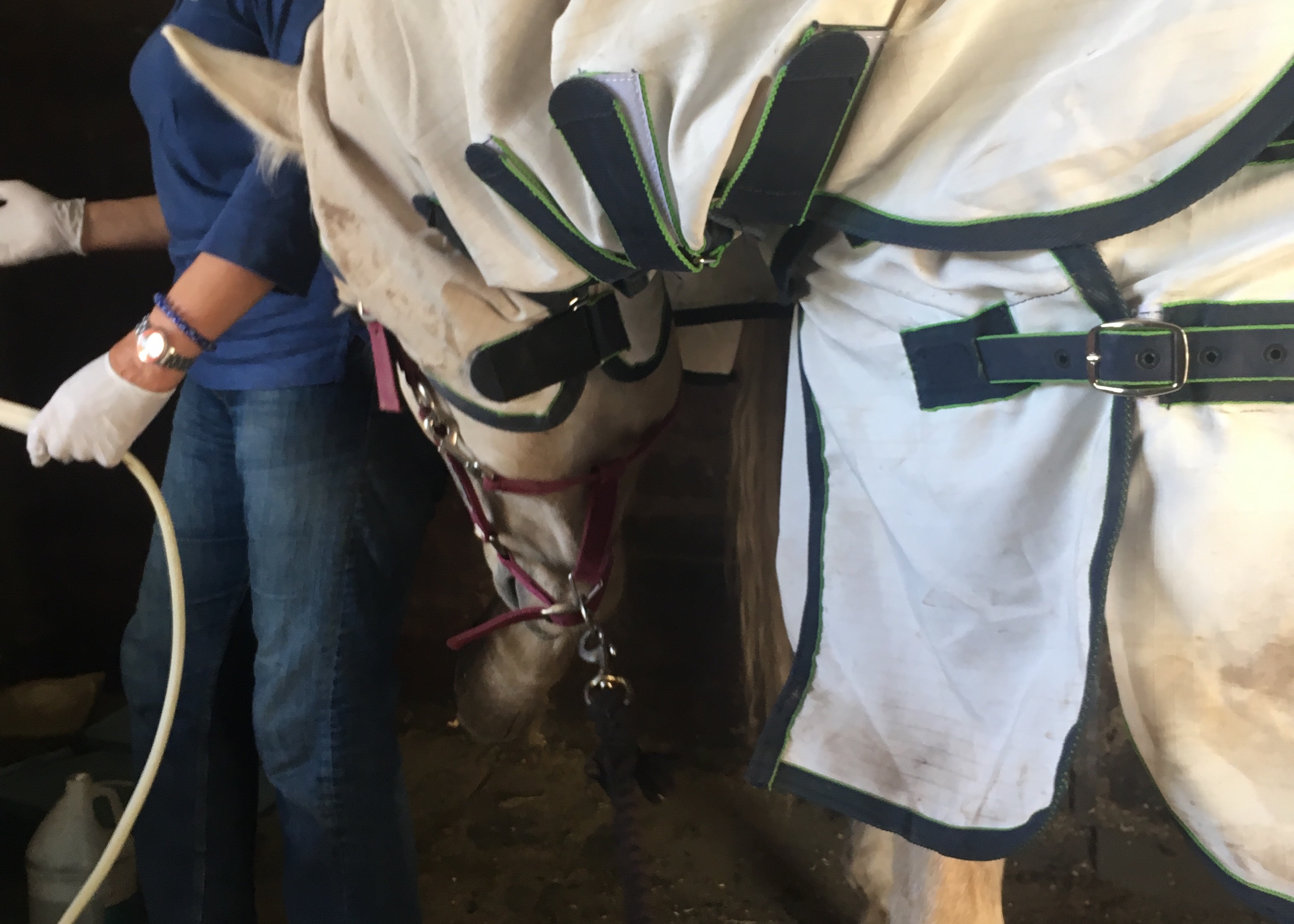 The ultrasound gel was apparently disgusting though as he proceeded to make faces, stick his tongue out and even tried to wipe his tongue on my stool. 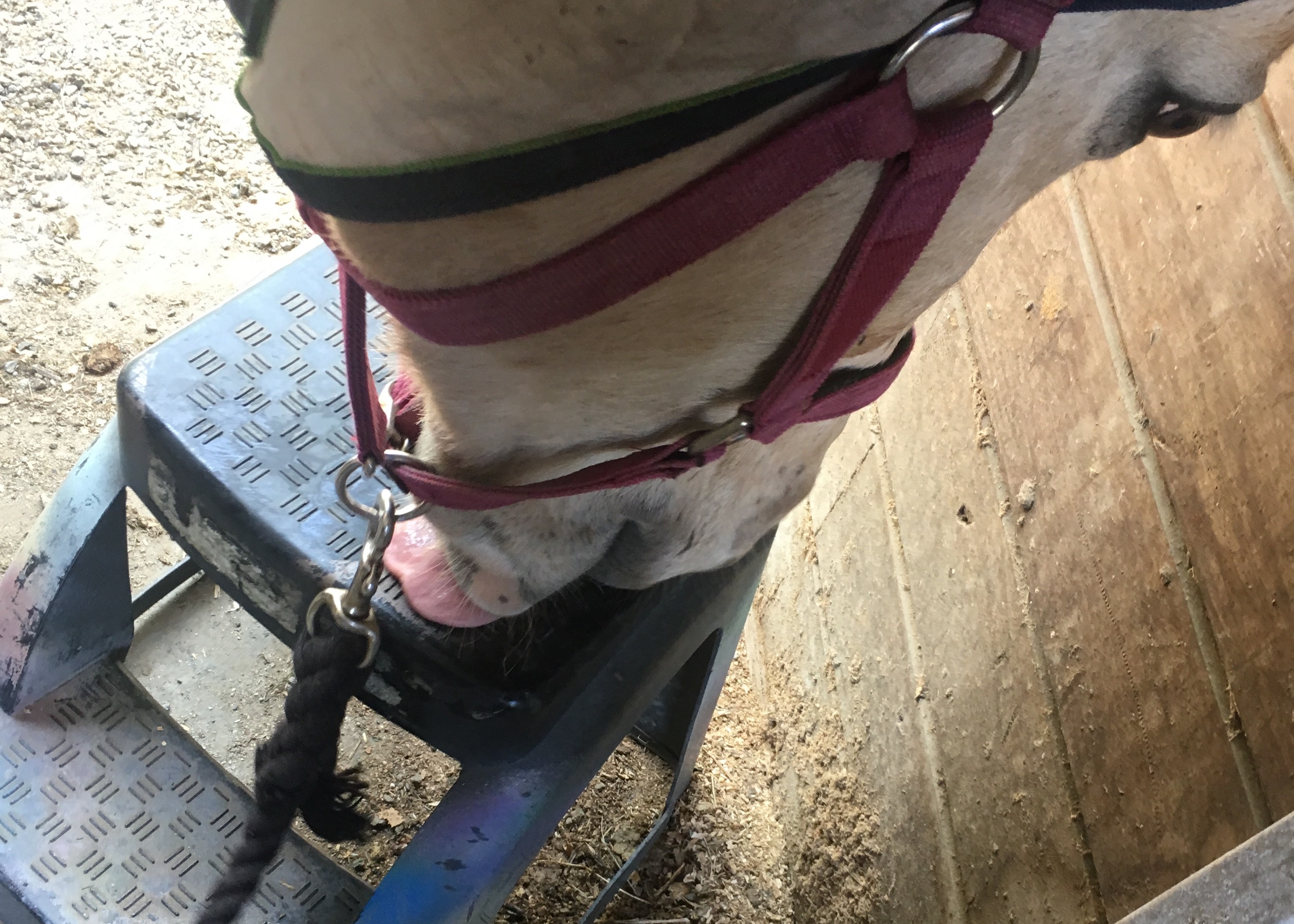 He’s really such a goofball. The vet went all over his leg and couldn’t find anything. I took a pretty low quality cell phone shot of the screen. The little circled areas are the medial and lateral suspensory branches. 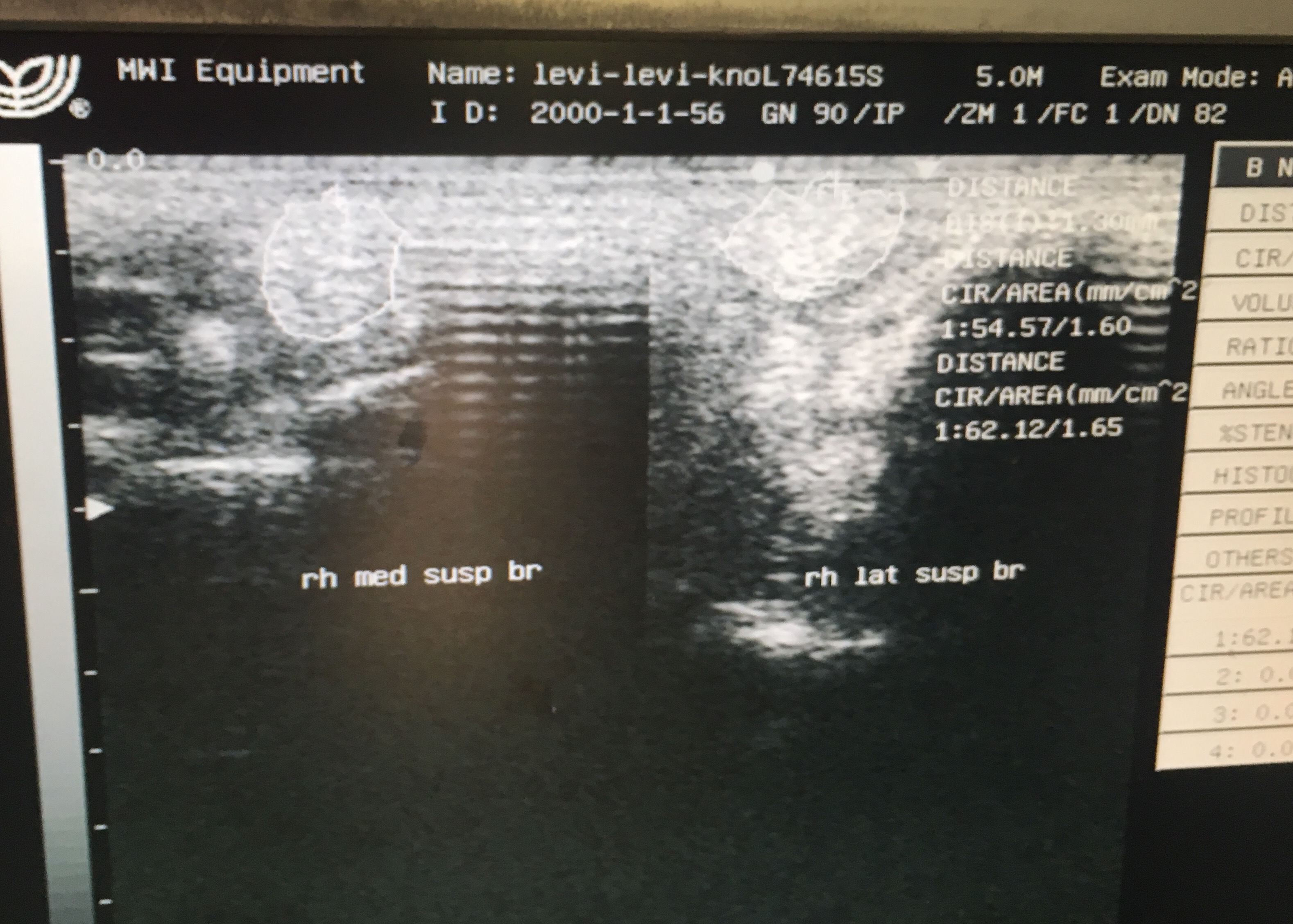 The vet said there was a slight difference in size in that the lateral suspensory branch was slightly larger, but she said that could just be user error from the difficulty of using the cursor tool for the machine to outline the branches. There was nothing to indicate any sort of tear to anything in the area. While I only got the one picture of the suspensory branches, the vet ultrasounded a bunch of structures in the area including the ddft. Nothing.

The vet recommended going back to light work, getting the chiro to fix his back and the farrier to back his hind toes up a bit and shorten his medial wall (farrier is due next week anyway) and then return to full work. Yay!

My husband and I head to the barn the next day. I was really excited to finally ride my damned horse and I find this: 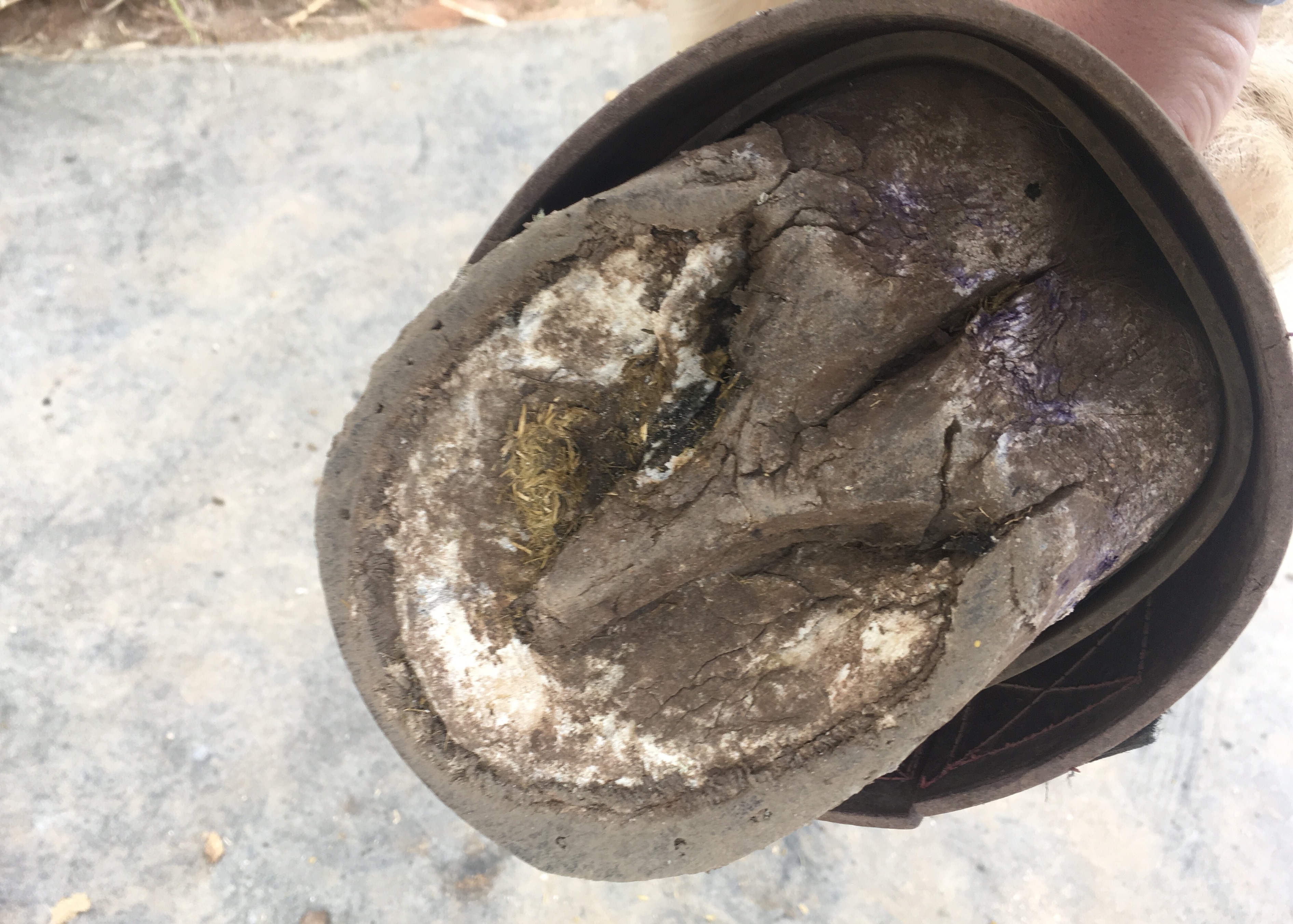 Actual footage of me:

I told you it was a conspiracy. Precious princess pony can’t be ridden without his special shoes. Even though the arena is pretty soft, I didn’t want to ride him without both shoes as the sneakers are so thick he’d be unbalanced with one on and the other not. I put him away while my husband went off to ride without me and then I wandered his pasture until I found the shoe. You can see how thick it is: 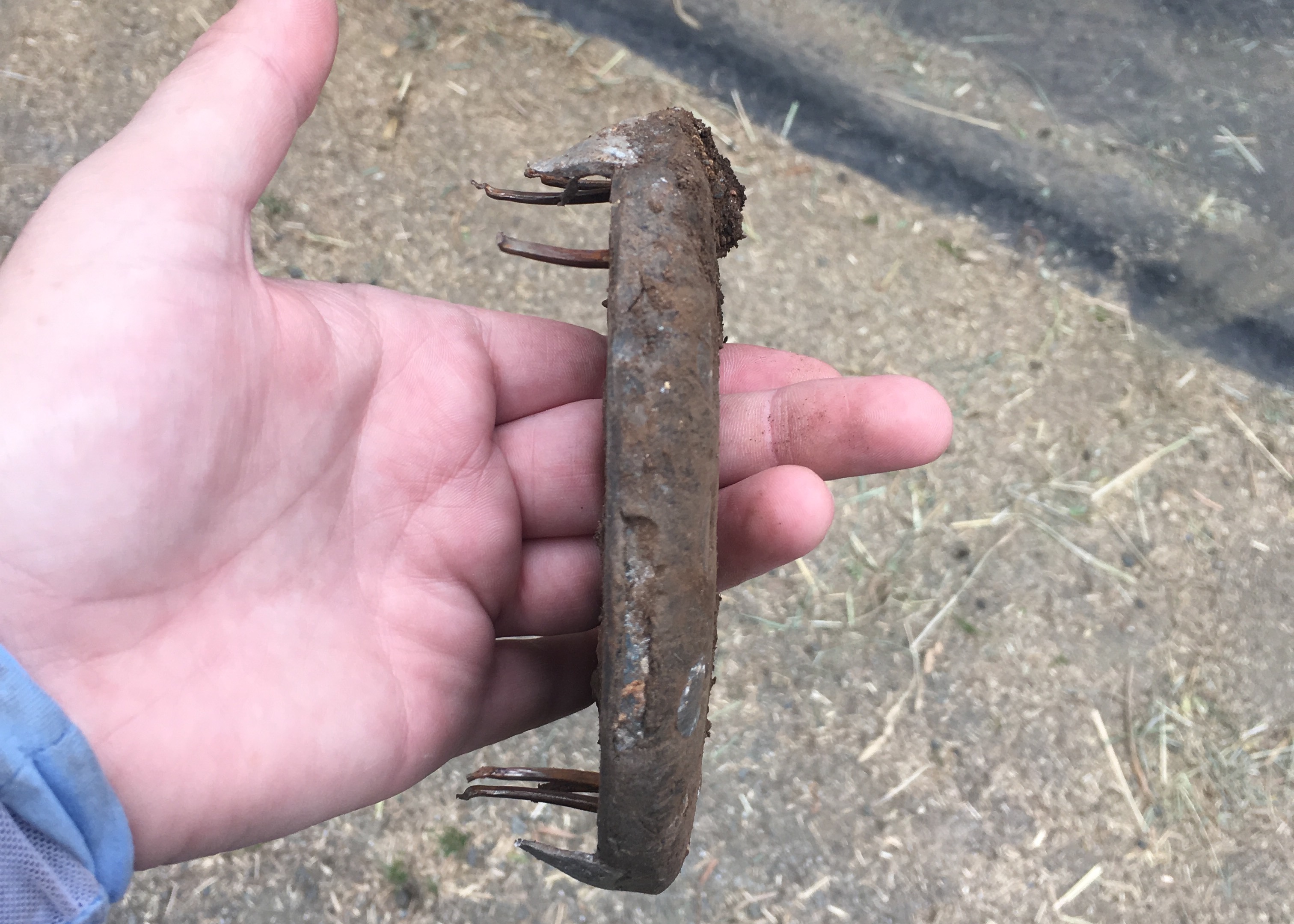 Later, I remembered that I own EasyBoots for Levi from back when he was barefoot, but it was too late to ride by the time I remembered that.  I finally show up the next day all set with an Easyshoe, jam it on his hoof and low and behold: 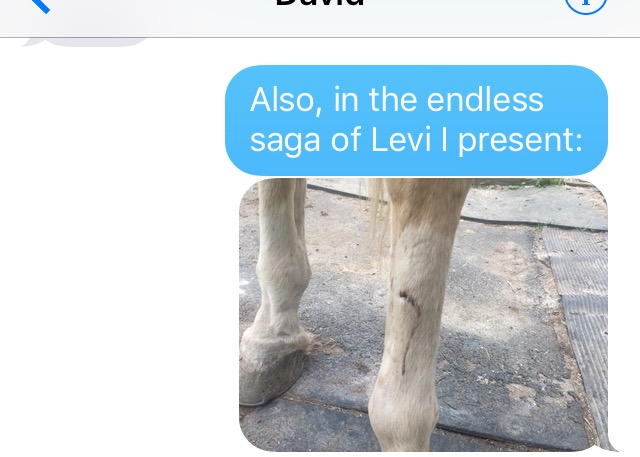 Because why not gash your fully functioning hind leg open? Why not? It wasn’t actually that bad, it just seems like this horse is actively conspiring to be useless. Well, I foiled his plans by riding him anyway. And he was actually really good. 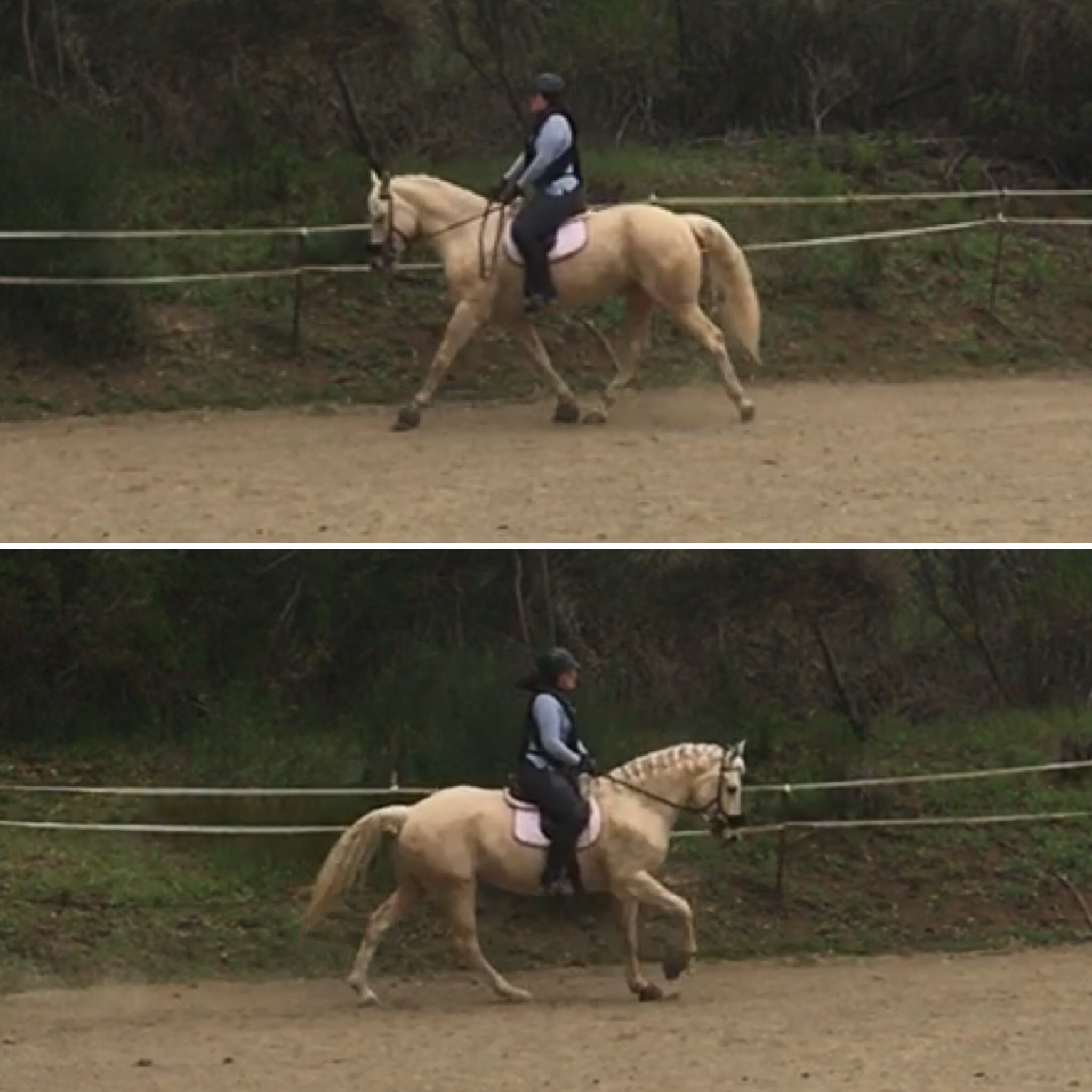 I fully expect to find him injured in some new fashion tomorrow, but at least we got a ride in before the rain returned.

28 thoughts on “Conspiracy of Uselessness”